We’re back with our full coverage of the results from the DEVOTE cardiovascular outcomes trial for Novo Nordisk’s next-generation basal insulin Tresiba (insulin degludec), which were presented to a packed auditorium at ADA 2017 on Monday (immediately before the CANVAS CVOT results). Read on below for our initial themes related to the results, followed by detailed coverage of the results and discussant presentations. For those looking for more, see our coverage of the topline results, initial breaking news report on the full results, and the full paper published in NEJM (which, by the way, has evidently become THE journal for diabetes CVOTs – the CANVAS publication can be found in the latest issue as well).

Dr. Steven Marso set the stage by presenting the trial design for DEVOTE. This randomized, double-blind, treat-to-target trial (n=7,637) enrolled people with type 2 diabetes on at least one diabetes therapy and an A1c >7% or <7% with basal insulin treatment at least 20 units/day. The study population had a high-risk cardiovascular profile; enrollment criteria included cardiovascular or chronic kidney disease for people over the age of 50 and the presence of cardiovascular risk factors for people over the age of 60. This global population included participants from five continents, 20 countries, and 438 trial sites. As is typical for CVOTs, the primary endpoint was time from randomization to first occurrence of a three-point MACE (non-fatal MI, non-fatal stroke, or CV death). Secondary endpoints included rate and incidence of severe hypoglycemia episodes. 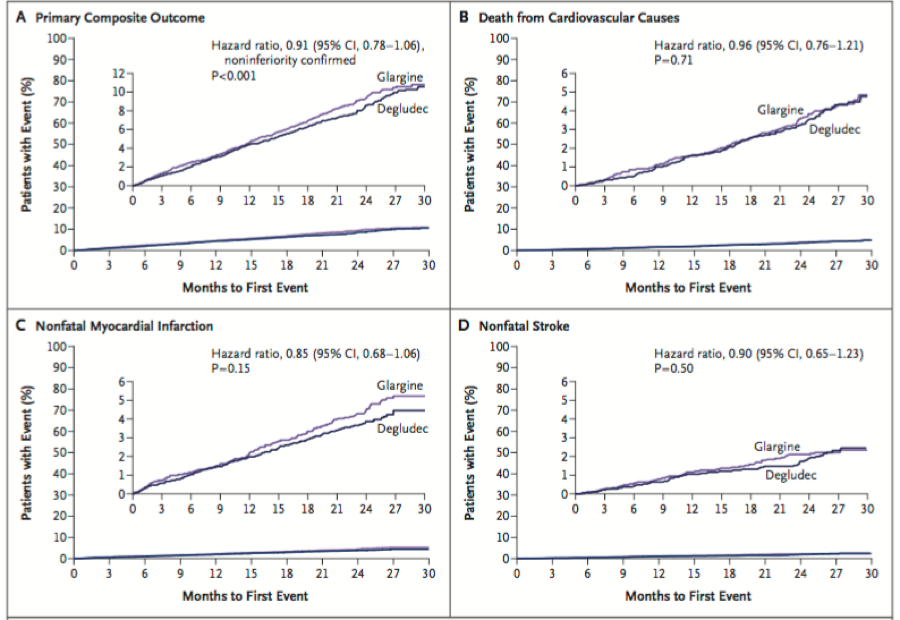 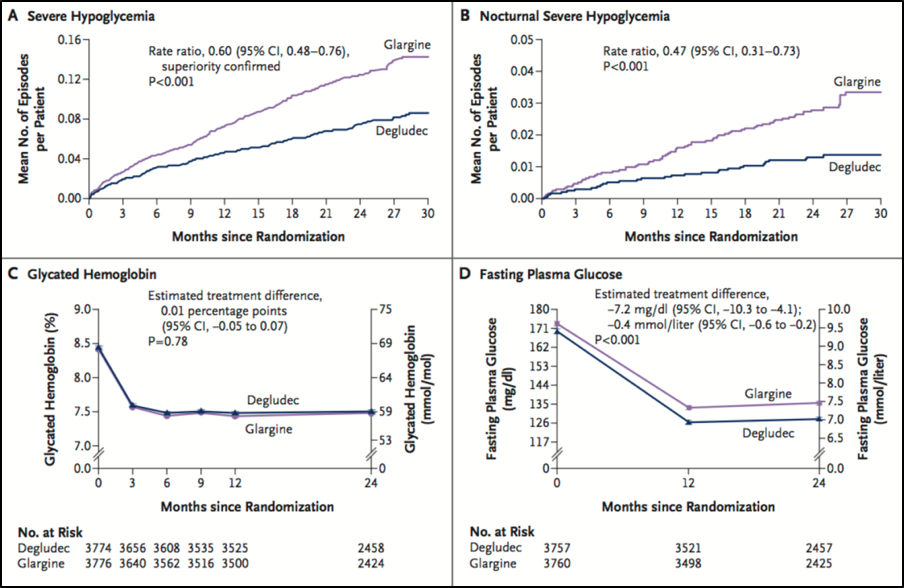 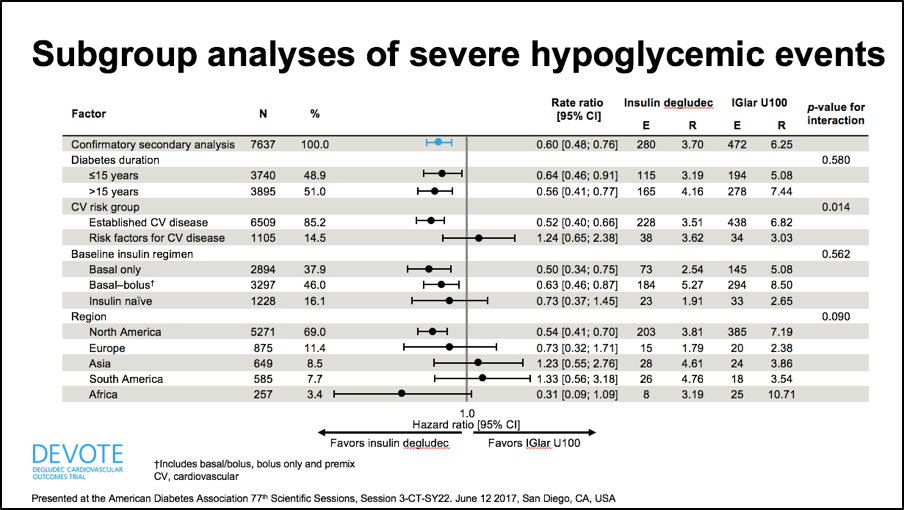 Dr. Richard Pratley reviewed safety outcomes from DEVOTE, which were largely similar between Tresiba- and Lantus-treated participants, indicating that insulin degludec is safe and well-tolerated. There were 1,473 serious adverse events in the Tresiba arm of the trial, affecting 39% of patients vs. 1,517 serious adverse events in the Lantus arm, affecting 40% of patients. Severe adverse events occurred in 25% of both the Tresiba and Lantus groups (945 and 962 events, respectively). Adverse events leading to treatment discontinuation occurred in 5% of the Tresiba group vs. 6% of the Lantus group (200 and 222 events, respectively) – 24 of these events were reported by investigators as probably/possibly related to insulin degludec, while 31 were probably/possibly related to insulin glargine. He called special attention to neoplasms, likely because of age-old concerns that insulin, as a growth factor, heightens cancer risk (though these worries have dissipated with additional studies, including ORIGIN). In DEVOTE, neoplasms were classified by one chairman and two independent oncologists, who sorted events into categories for malignant, benign, and unclassifiable. The hazard ratio for benign neoplasm was 1.37 in favor of Lantus, though this did not reach statistical significance (95% CI: 0.76-2.47). The hazard ratio for malignant neoplasm was 0.94 in favor of Tresiba, but there was no statistically significant signal for risk reduction (95% CI: 0.71-1.24). All in all, there were 45 benign neoplasms observed during the course of the trial (26 in the degludec group and 19 in the glargine group) and 192 malignant neoplasms (93 in the degludec group and 99 in the glargine group). These safety findings underscore Tresiba’s non-inferior profile vs. Lantus, which holds true not only for CV effects, but for all adverse events as well.

Dr. John Buse delivered concluding remarks on the DEVOTE full results, putting this trial into context with BEGIN, SWITCH 1 and SWITCH  2, and our knowledge to-date of how hypoglycemia affects CV risk and patient quality of life. One of the most important takeaways, in his view and ours, is that the significant 40% risk reduction for severe hypoglycemia at a similar A1c level and the 53% risk reduction for severe hypoglycemia overnight corroborate Tresiba’s hypoglycemia benefit as reported in BEGIN, SWITCH 1, and SWITCH 2. Novo Nordisk has submitted SWITCH 1 and SWITCH 2 data to the FDA for inclusion on the Tresiba label (decision expected by July), and this label update was recently EMA-approved. Novo Nordisk has also submitted the DEVOTE data to both the FDA and the EMA. Busy patients/providers deserve ready access to information on empirically-grounded benefits, such as lower risk for hypoglycemia, particularly significant hypoglcyemia, a key outcome beyond A1c metric. Fear of hypoglycemia affects patients and providers alike, with 79% of type 1 patients and 58% of type 2 patients who experience a severe episode opting to decrease their insulin dose (leading to suboptimal glycemic control). Similarly, 72% of PCPs and 79% of diabetes care specialists endorse that they would treat patients more aggressively if hypoglycemia was not a concern. Dr. Buse also shared findings from a large, systematic metaanalysis that linked hypoglycemia to a significantly increased risk for all-cause mortality (HR=1.8, 95% CI: 1.5-2.2), CV mortality (HR=2.2, 95% CI: 2.0-2.4), and major CV events (HR=2.3, 95% CI: 1.1-5.0). While the decrease in hypoglycemia seen in DEVOTE wasn’t sufficient to significantly lower CV events and CV death for people on Tresiba vs. Lantus, Dr. Buse emphasized that reducing the severity and frequency of hypoglycemia could have an independent positive impact on a patient’s cardiovascular health. What’s more, helping patients avoid hypoglycemia allows for best practice diabetes management and substantially improves quality of life for people living with this chronic disease. Although cost wasn’t explicitly mentioned during Dr. Buse’s presentation, we know hypoglycemia incurs major avoidable costs on the healthcare system due to hospitalizations, emergency care, productivity loss, and more. We imagine the profound hypoglycemia benefit in DEVOTE could come into play for Tresiba in formulary negotiations – we’d surely love to see a health economic analysis predicting cost-savings. Dr. Buse announced that further analysis from DEVOTE, focused on the associations between glycemic control, glycemic variability, and outcomes, will be presented at EASD 2017 in Lisbon, Portugal. We can’t wait.

University of Minnesota and the International Hypoglycemia Study Group’s Dr. Elizabeth Seaquist provided a thoughtful and balanced independent commentary on the DEVOTE results. She praised the strengths of the trial design, including the randomized, double-blinded, event-driven, and treat-to-target design with well-defined endpoints. She highlighted the large size of the trial as well (n=7,637 at 434 sites on five continents), commenting that the study’s “generalizability to patients with type 2 diabetes is assured.” The very low dropout rate (2%), standardized titration protocol, rigorous adjudication of severe hypoglycemia, and systematic collection of adverse events also improved Dr. Seaquist’s confidence in the findings and conclusions. That said, Dr. Seaquist also pointed out several weaknesses in the data that was collected – one was directed more at the design of the trial while the other two were directed at the limited clinical information provided by the trial. On the first, Dr. Seaquist noted investigators in the trial could modify the titration protocol based on clinical judgement and it’s unclear if these modifications were applied in a standardized way between the two arms of the trial. In terms of the information included in the endpoints, Dr. Seaquist underscored that data on moderate symptomatic hypoglycemia and on hypoglycemic events with blood glucose levels ≤54 mg/dl were not collected. The former is the most common kind of hypoglycemia experienced by patients and the lack of inclusion of this endpoint makes it difficult to assess the impact of Tresiba on more common forms of hypoglycemia. The latter information would be important and useful to have since it’s known that impaired awareness of hypoglycemia is more likely to develop with recurrent episodes of hypoglycemia with blood glucose ≤54 mg/dl. Dr. Seaquist also highlighted additional questions that should be addressed using the DEVOTE data, including (i) Was the reduction in severe hypoglycemia in the Tresiba arm associated with a reduction in healthcare costs?; and (ii) Was the reduction in severe hypoglycemia in the Tresiba arm associated with improved quality of life/sleep and reduced fear of hypoglycemia (this is yet another question that would have been aided by greater collection of hypoglycemia data in our view)? Furthermore, she highlighted several questions that DEVOTE leaves unanswered: (i) Does Tresiba reduce hypoglycemia more relative to Lantus in patients with severe renal impairment?; (ii) What is the relative impact of Tresiba vs. Lantus on severe hypoglycemia in insulin-naïve patients?; and (iii) How do the effects of Tresiba on glycemic control and hypoglycemia in type 2 diabetes compare to Toujeo (U300 insulin glargine)?