Related to a presentation of very impressive phase 2b results at EASD 2018, Lilly simultaneously held an investor call dedicated to its once-weekly GLP-1/GIP dual agonist LY3298176 (now named tirzepatide), reflecting on the new data and providing a timeline for the phase 3, eight-study SURPASS program. Listen to the conference call here and check out the slides here. Also be sure to check out our coverage of the data presentation from EASD here; below, we’ve highlighted new info from the conference call, plus Q&A.

As released at EASD, the highest, 15 mg dose of tirzepatide conferred a rather unprecedented 2.4% drop in A1c (baseline 8.1%) and ~25 pounds of weight loss at 26 weeks, though one in four participants in this group discontinued treatment due to adverse events, and 34% discontinued overall. Fortunately, at the next lowest dose (10 mg), the side effects were attenuated somewhat with a level comparable with Trulicity 1.5 mg and with a 2.0% A1c drop, which is, in our opinion, a more acceptable trade-off in A1c and weight benefit (see summary figure below) though even at that level, the side effects are high. 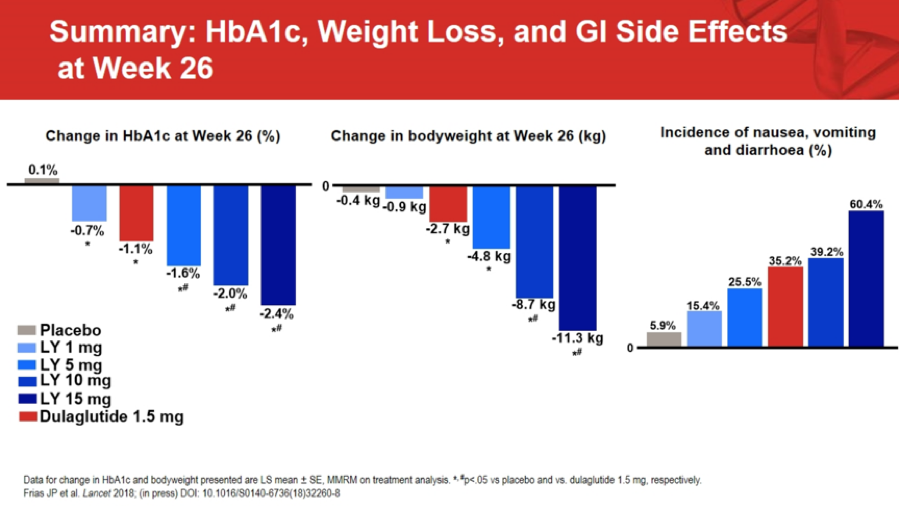 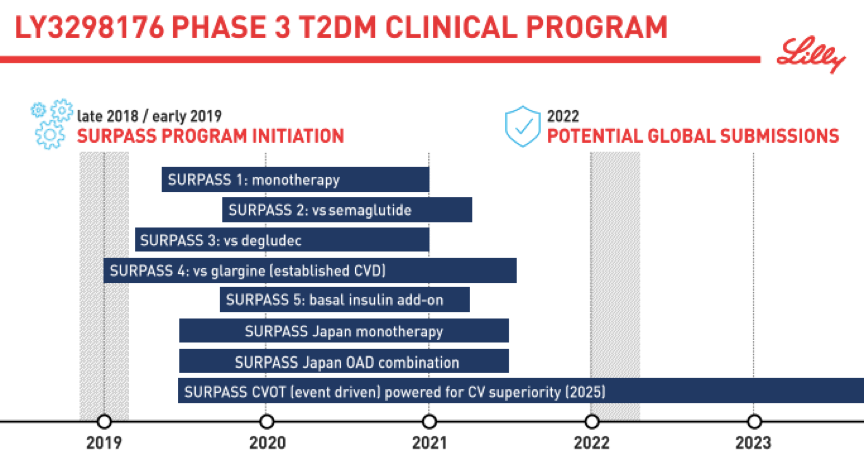 Q: How far do you think the weight loss could have gone if patients were continued on drug longer, given that it had not plateaued at 26 weeks?

Dr. Woodward: The duration of the phase 2b trial was 26 weeks. Within our phase 3 program, we have longer duration studies planned that will give us a much better understanding of the potential for additional weight loss. So, we do note the same as you that these weight decreases have not plateaued at 26 weeks. The eventual endpoint of that will be seen in phase 3 studies.

On Safety and Tolerability

Q: How much, if any, of the weight loss was due to the GI upset versus the mechanism of the drug?

Dr. Woodward: The majority of GI side effects that we've seen are consistent with the GLP-1 receptor agonist class, and they were early during the titration period. The supplementary material in The Lancet publication shows the time course of those events, and we've actually seen relatively low prevalence of GI side effects throughout the course of longer treatment. As such, we would not expect the weight loss to be primarily driven by GI side effects. We have seen reported adverse events of decreased appetite, which you would expect. That's a known effect with GLP-1 receptor agonists, and that certainly could be contributing to some of the weight loss that we are seeing.

Q: What level of nausea, vomiting, and dizziness would be acceptable given the efficacy of the 15 mg dose? Was it any less easy to mitigate diarrhea with titration?

Dr. Woodward: What we've seen from a separate titration study that we've conducted to 12 weeks is that discontinuations were quite low, less than 5%. We have used that information to inform the titration steps for the phase 3 program, which gives us increased confidence that we'll see a better tolerability profile.

With respect to the prevalence of diarrhea, the supplemental figure in The Lancet publication continues to show that once patients get past the early titration period, the prevalence of these symptoms is relatively lower. As such, we don't think that that's going to be a long-term problem, although we do look forward to the phase 3 trials and understanding this in a larger cohort of patients over the long-term.

Q: After titration, were discontinuation and adverse events rates still higher in the 15 mg arm?

Dr. Woodward: I can confirm that the majority of discontinuations with 15 mg occurred during the early titration period. Once patients passed that period, the tolerability did improve and discontinuations decreased accordingly.

Q: Anti-drug antibodies range from 31%-49% across the groups. What is your confidence that the long-ish trials that you talked about won’t show an impact on efficacy?

Dr. Woodward: With respect to the anti-drug antibodies [ADAs], our perspective is that we will continue to evaluate this in phase 3, although we do have good information from the phase 2b program. We have not seen any impact on the pharmacokinetic profile – in other words, no reduction in drug levels with respect to the [ADAs]. These have been relatively low titers, generally, when they have been observed. We also have not seen any reduction in the pharmacodynamics, treatment response, or glycemic response with the presence of [ADAs] nor any association with hypersensitivity events. We look forward to further study in phase 3, but this is the information that we currently have that appears reassuring.

Q: How do the cases of acute pancreatitis compare to dulaglutide or other GLP-1 data from phase 2 trials?

A: The safety data that we've seen thus far is consistent with what we know about the GLP-1 receptor agonist class. There were two events of pancreatitis within this phase 2b trial. One event was early and was considered non-serious by the investigator. The patient had some abdominal discomfort, but went for a CT scan and radiographic imaging, and there was no confirmation of pancreatitis with the radiographic imaging. The second case was in a patient who had been off of study drug for almost a month and a half and developed cholecystitis and secondary acute pancreatitis. We've not seen any other indication that there is a risk with GIP, and the changes in amylase and lipase, which are a known response from GLP-1 therapy, seem consistent with what we've seen from dulaglutide with our dual agonist.

On Future Studies and Development

Q: Are you taking both the 10 and 15 mg doses into phase 3 development?

Q: Is the SURPASS CVOT designed similarly to REWIND with a healthier patient population or more like Novo Nordisk’s studies with established CV disease?

Dr. Woodward: Most importantly, this CVOT is a superiority trial for MACE event reduction, but we have not finalized the design of this trial. We think it's important to have a representative population enrolled, but we have not narrowed down the population yet, whether it would be entirely secondary prevention or would include a balance of primary and secondary prevention.

Q: GIP has been described in the literature as far back as 20 years ago. Why hasn’t industry development been quicker?

Dr. Ruth Gimeno (VP, Diabetes Research and Clinical Investigation): I think sometimes we ignore some of these existing hormones. Certainly, there has been some literature describing GIP as an obesogenic hormone and reports of GIP resistance linked to hyperglycemia. We believe by having GLP-1 together with a GIP component, we can actually reverse that GIP resistance, and I think that was an important component of developing the dual agonist.

Q: Given that other GLP-1/GIP candidates (Merck and Roche) have been dropped in development, what is unique about yours?

Dr. Gimeno: Our molecule is the first molecule that is biased towards GIP activity – an important differentiator. We've purposefully designed this molecule to fully engage the GIP receptor before reaching the dose-limiting tolerability issues of the GLP-1 receptor. This is the most likely hypothesis for the difference between different molecules. In this space, every agonist can be slightly different. These molecules also have differences in terms of pharmacokinetics and biodistribution which could certainly contribute as well.

Q: What are your thoughts in terms of initiating a phase 3 obesity program?

Dr. Woodward: With respect to obesity, we're certainly encouraged by these data overall, and we're looking at what other ways that this could be developed. Our primary focus is looking at type 2 diabetes today, and we're pleased to announce the introduction of the SURPASS program. But we will continue to look at other opportunities more broadly.

Q: Might you look for an indication in NASH or renal function?

Dr. Daniel Skovronsky (CSO): Right now our focus is on the type 2 diabetes indication. We're really excited about the potential of the drug there. Of course, we're open to exploring other potential applications of this molecule, and the data suggests great potential in various paths. We'll continue to think about that into the future.

Q: Titration may temper side effects, but can you confirm it has no impact on either A1c reduction or weight loss?

Dr. Woodward: We would not expect the titration to have a negative impact on efficacy of the product.

Q: Could the Trulicity pen device be used for this drug?

Dr. Woodward: We are looking to begin the phase 3 trials with a single-use auto injector. We really want to replicate the Trulicity experience here and have a positive patient experience on the trials and commercially when this comes to market.