Early this morning, J&J provided its 2Q15 update in a call led by CEO Mr. Alex Gorsky. Below we include our top ten highlights from the call, followed by relevant Q&A.

2. In response to a question about the risk of ketoacidosis with SGLT-2 inhibitors, management commented only that very few cases were seen in Invokana’s phase 3 trial program.

3. Management highlighted Janssen’s new microbiome research initiative as an example of a “disruptive investment” that could lead to true disease interception.

4. Several ongoing trials could potentially support expanded indications for Invokana, including one in type 1 diabetes that should report results in the near future.

5. Global Diabetes Care revenue totaled $494 million, declining 12% as reported and 2% operationally YOY; the global sales decline has characterized 12 of the past 13 quarters. Weakness was attributed to US price declines partially offset by the strong double-digit growth of the Animas Vibe and volume growth in SMBG.

7. Notably, J&J expects to launch the Calibra Finesse bolus-only insulin delivery device in the US in 2016. The company is beginning a clinical outcomes study, though this is not yet on ClinicalTrials.gov. We’ve never heard such a firm guideline.

8. The Animas Vibe has seen strong 32% operational growth in the first half of 2015 following the January launch. J&J recently submitted a filing to the FDA for a pediatric indication of the Vibe and expects approval by the end of year.

9. A next-generation CGM-integrated pump is in development – there were no timing updates or details, though we assume it’s the hybrid closed-loop product alluded to at AACE 2015.

1. Invokana (canagliflozin) and Invokamet (canagliflozin/metformin) posted $318 million in sales in 2Q15, up 172% year over year (YOY) from $114 million in 2Q14 and 14% sequentially from $278 million in 1Q15. 95% of revenue ($302 million) came from the US, consistent with the results in past quarters. The breakdown of the SGLT-2 inhibitor market in the US vs. Europe illustrates the power of first-in-class status: while Invokana dominates the US market (where it was first to launch), AZ’s Forxiga (dapagliflozin) holds close to a 90% market share within the class in Europe, where it was first to market. Management continues to highlight Invokana as a significant contributor to growth, and the drug certainly looks poised to reach (and likely exceed) blockbuster status this year. See the table below for an overview of sales for the past year.

2. In response to a question about the risk of ketoacidosis with SGLT-2 inhibitors, management commented only that very few cases were seen in Invokana’s phase 3 trial program. The subject, which has been a major topic of discussion at recent conferences, did not come up during prepared remarks, but one analyst inquired during Q&A whether the controversy has had any impact on prescribing habits. Management responded only that Invokana’s phase 3 trial program included over 10,000 patients and that very few cases of DKA were seen.

3. Management highlighted Janssen’s new microbiome research initiative as an example of a “disruptive investment” that could lead to true disease interception. As a reminder, the company announced the launch of the Janssen Human Microbiome Institute in March along with two other research platforms focused on prevention. The gut microbiome is currently one of the most cutting-edge areas in diabetes and obesity, though the research remains at a very early stage. The key next steps will involve clarifying causal relationships between specific microorganisms and particular health effects – not an easy task, but one that Janssen’s resources and drug development experience should make it particularly well-equipped to take on.

4. J&J is conducting several ongoing trials that could potentially support expanded indications for Invokana, including one in type 1 diabetes that should report results in the near future.

5. Global Diabetes Care revenue from LifeScan BGM and Animas pumps totaled $494 million, declining 12% as reported and 2% operationally year-over-year (YOY); sequential sales grew 2% against a very low base ($484 million in 1Q15 marked the lowest sales in a decade). This marked 2Q15 as another quarter of YOY declines globally, which now includes 12 of the past 13 quarters (3Q14 was the lone exception). The quarterly decline was on an easy comparison, as sales fell 5% YOY as reported and operationally in 2Q14. The quarterly performance in reported revenue marks the second-consecutive quarter in which J&J’s global sales dropped under $500 million – a pattern we had not seen since in a decade (3Q05-4Q05). 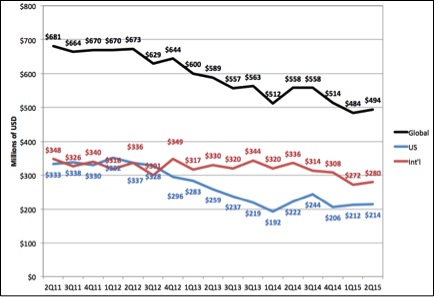 6. US Diabetes Care sales in 2Q15 reached $214 million, falling ~4% YOY against a very easy comparison to 2Q14 (sales fell ~14% YOY). As expected, management did not comment extensively on the US business. In the past 14 quarters (since 1Q12), J&J has recorded only three quarters of positive YOY reported growth in the US. Positive 1% sequential growth did reflect the fourth such quarter out of the past five, suggesting the US business has at least stabilized somewhat.

7. J&J expects to launch the Calibra Finesse bolus-only insulin delivery patch device in the US in 2016. We would note that commentary on Calibra’s timing has tended to shift quite significantly quarter-to-quarter – in the past year, we have heard everything from “May 2016” to “a couple years out” – though this is the most definitive commentary we have heard in several quarters. It seems as though J&J has prioritized this project of late, and we wonder whether movement on the Invokana side has moved this along. It’s outstanding to see this project moving ahead, since we believe so many individuals could benefit from discreet, low hassle bolus delivery. The company is beginning a clinical outcomes study soon, though this is not yet on ClinicalTrials.gov. As a reminder, the Finesse is a three-day, very slim profile (2 inches long, 1 inch wide, and 0.25 thick), bolus-only delivery device. It was acquired from Calibra Medical in July 2012.

8. The Animas Vibe has seen strong 32% operational growth in the first half of 2015 following the January launch. The first-to-market-Dexcom-integrated pump is certainly benefitting J&J – management estimated that Animas has now achieved the “number two share position” among pump companies, per internal estimates. We’re not sure how this is calculated, since no company directly reports patient-adds. This is the first time J&J has broken out growth for the Vibe individually, and though it surely comes from a small base of OneTouch Ping growth, it is encouraging. Management did not provided a specific breakdown, but attributed the growth to a mix of: (i) existing patients upgrading to the new product; (ii) gaining new-to-therapy insulin pumpers; and (iii) “a lot of conversion” from other pump platforms. Of course, if this growth tapers in coming months, it would suggest that these additions were more weighted toward upgrades.

9. J&J acknowledged that a next-generation CGM-integrated pump is in development – presumably, this is the hybrid closed-loop project alluded to at AACE 2015. There were no timing updates or highly notable specifics, though management remarked that the product will combine a more user-friendly design with a more accurate pumping algorithm. J&J’s artificial pancreas project has moved at a slow pace since signing its partnership with the JDRF in 2010, and we hope more details will come soon.

10. We were intrigued to hear that J&J is actively thinking about glucose monitoring adjacencies. Said Ms. Sandi Peterson: “The opportunities for J&J to become a healthcare technology innovator are immense. We have identified key technology areas that will accelerate growth and are actively pursuing programs and partnerships in those areas.” There is clear enthusiasm to use digital solutions to help providers, especially in glucose monitoring where Ms. Peterson acknowledged that the company is invested in improving the ecosystem by leveraging big data and analytics. We’re not sure exactly what this means, though could imagine (i) clinical decision support for patients or providers (e.g., providing insulin-dosing recommendations); (ii) advanced pattern recognition; and (iii) population tracking and at-risk patient identification.

Q: The Animas Vibe is off to a strong start. Can you give us a little color on the roll out? Are you converting your own patients or are you gaining new accounts? And what's next beyond the Vibe in the pipeline?

A: Regarding the Vibe, we had launched the product in Europe and also in Canada over the last couple of years. In both Europe and in Canada, it also had a pediatric indication, which clearly gives it some unique differentiation in the marketplace. We effectively launched the Vibe in the US at the beginning of this year. We've seen significant positive growth in uptake of the product in the US, which is a combination of existing patients upgrading to the new product, as well as gaining new-to-therapy insulin pumpers. We have also seen a lot of conversion from other pump platforms to our platforms.

In the second quarter, we also filed for the pediatric indication for the US product. Obviously, the FDA will go through its review process, but we're hopeful that before end of this year, we should have a pediatric indication that will contribute to an uptick in the US business. As I also mentioned earlier, there are three other things in insulin delivery that we're very focused on, and with two of them, we are working in partnership with Dexcom. One, we are working on a next-generation pump that will really bring out the best in what we've learned about how to make it more user-friendly and effective for patient. Two, we are ensuring that we've got the right algorithm in the pump for insulin delivery.

We’re also doing a lot of work on the BGM side, really creating a better ecosystem for the patient that helps them manage their condition much more effectively. We're using information technology in a smarter way, and we're seeing a very positive impact. So that's another place that we’re going to be doing a number of different things.

Last but not least, I mentioned that the Calibra patch pump is another great growth platform. We believe it is really unique to the marketplace and a way to help type 2 patients with diabetes, who are insulin dependent. It will provide a new, more discrete way of getting insulin delivered. So, there are a lot of things in the works. There are a lot of things in our pipeline in insulin delivery.

Q: With Invokana, it looks like the momentum has continued and it continues to look fantastic. Could you offer any additional comments?

A: We continued to highlight the profile. We have great reimbursement, well in excess of 50% to 60% in both the commercial and Medicare sides of the business. We have continued to see strong TRx trends in both primary care and endocrinology. Overall, we are seeing strong uptake and we think it’s a big opportunity.

Q: About halfway through the quarter we did have the FDA comments around ketoacidosis with Invokana. Obviously performance seems fine this quarter, but are you sensing any sort of questions or changes in prescribing habits as a result of what the FDA has stated at this point?

A: It’s early on, but our phase 3 trials included about 10,000 patients and we saw very few cases of DKA.