Tandem reported very strong 1Q19 financial results this afternoon in a call led by newly appointed CEO John Sheridan (his first as CEO after taking over in March), CFO Leigh Vosseller, and Executive Chairman Kim Blickenstaff. See below for the top financial and pipeline highlights.

1. Sales More Than Double YOY to $66 Million; International Sales of $11 Million Up 59%; Better-Than-Usual 21% US Sequential Decline

Tandem reported worldwide sales of $66 million, more than doubling YOY (+142%) on a very challenging comparison to 56% YOY growth in 1Q18. This marks six consecutive quarters of 50%+ sales growth, and three consecutive quarters of 90%+ growth. As usual, pump shipments comprised the majority of sales (70%), with infusion sets (20%) and cartridges (10%) contributing the remaining portions. In keeping with seasonal patterns, revenue declined 13% sequentially from the impressive record sales of $76 million in 4Q18. US sales of $55 million in 1Q19 doubled YOY (+100%) on a tough comparison to 56% YOY growth in 1Q18; sales declined a weaker-than-usual 21% sequentially from the record $69 million in US sales in 4Q18. Q1 is traditionally Tandem’s seasonally weakest quarter, with sequential declines of 32% and 29% in 1Q18 and 1Q17, respectively. 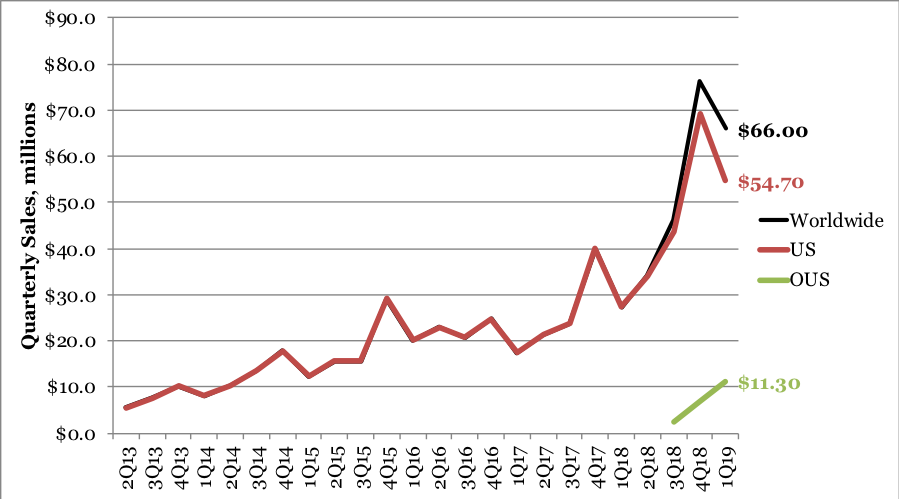 Tandem shipped 14,732 pumps in 1Q19, with 9,669 pumps shipped in the US and 5,063 pumps shipped OUS. Worldwide pump shipments more than tripled YOY (+232%) and declined just 9% sequentially – very impressive! US pump shipments more than doubled YOY (+118%) and declined 25% sequentially. As noted above, this is a softer-than-usual Q1 sequential decline, which has typically seen US shipments down ~35%, according to Ms. Vosseller. International shipments rose a very strong 57% sequentially, reflecting healthy demand as Tandem makes the t:slim X2 available globally. Based off four-year cumulative pump shipments, the US in-warranty installed base is ~87,000, up from ~80,000 as of 4Q18. 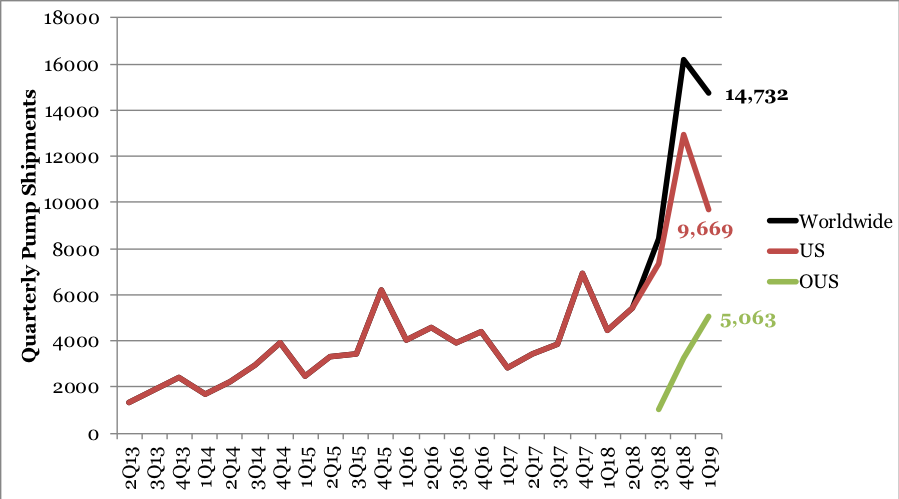 Management increased full-year 2019 guidance to between $300-$315 million, a whopping ~$45 million rise (at the midpoint) and now reflecting annual sales growth of 63%-71%. This includes the previously anticipated international sales estimate of $45-$55 million, which Tandem still expects to be “more heavily influenced” by the Animas opportunity in the next two quarters. Ms. Vosseller explained that the original guidance to start the year ($255-$270 million) was based on renewals, a “best estimate” of the remaining Animas customers, and “modest market expansion.” However, Tandem has seen “unprecedented growth” in MDI and competitor conversions, as well as building momentum in pump shipments over the first four months of the year, leading to the substantial guidance increase of $45 million. Indeed, Ms. Vosseller noted that January accounted for just 25% of total shipments in 1Q19 and that the “escalation” across 1Q19 has continued into 2Q19.

The Control-IQ hybrid closed loop pivotal trial is now complete (n=168), with data to come on Sunday of ADA, an FDA submission expected in July, and a US launch now expected in “4Q19.” After the six-month study was paused in March due to a minor software bug, Tandem successfully rolled out a remote software update and completed the trial on time in April – impressive execution. But in a new wrinkle, Tandem won’t actually see the data until it is presented at ADA – since this is an NIH-funded scientific study, there are “procedures around who has access to the data.” The company may see a a preview of summary data shortly before it’s presented at the conference, but won’t receive the full data set until after ADA. This marks three straight updates where the Control-IQ US launch timing has inched steadily back – from “summer 2019” (3Q18) to “summer and end of Q3” (4Q18) to “2H19” (March) to now “4Q19.” Still, with a July submission and a potential three-month FDA review (i.e., similar to 670G), that puts approval around early 4Q19 – positioning Control-IQ as the second hybrid closed loop to market in the US, and the first with automated correction boluses and a no-fingersticks CGM (G6). It’s unclear if Tandem and Dexcom will attempt to submit Control-IQ as an “iController” under a de novo submission, potentially enabling a down regulation to Class II (510(k)). At ATTD, FDA’s Dr. Courtney Lias suggested such a pathway is “likely.” The other two system components – the G6 iCGM and the t:slim X2 ACE pump – are already FDA regulated as interoperable (class II) devices, separating them from the algorithm itself.

2. Basal-IQ International Launch in 2H19, with Timing to Vary by Country

Tandem’s Basal-IQ with Dexcom G6 integration will begin launching outside the US in 2H19, with timing to vary by country. The launches will depend on distribution partners, regulatory progress, reimbursement, and where Dexcom’s G6 is available. The “2H19” timing is ~3-6 months back from September’s Analyst Meeting, which expected an “early 2019” international launch of Basal-IQ. (The 4Q18 call more vaguely said to expect such a launch “this year.”) Tandem obviously has a lot of the building blocks in place and early international sales are strong. Basal-IQ will provide important international competition against 670G, which has only just begun rolling out OUS.

Tandem expects to launch its t:slim X2 mobile app for Apple and Android this “summer,” offering secondary display of pump data and wireless data uploads from the t:slim X2 pump to t:connect. This is ~1-3 months wider timing than in 4Q18, where the plan was a “1H19” launch. This app will be important feature competition vis-à-vis Insulet’s Omnipod Dash, which also expects its secondary display app to launch this summer. These apps may sound incremental, but they offer important benefits: patients can view pump status on their own phone and upload data without plugging in to a computer; HCPs should get insulin pump data more reliably; Tandem should get more consistent, passively-flowing device data. These apps are also a stepping stone to wireless smartphone control, which remains Tandem and Insulet’s ultimate goal. It’s unclear if smartphone pump control will be available for t:slim X2 or fully wait for t:sport in late 2020 (see below).

CEO John Sheridan shared that timing on t:sport “hasn’t changed,” with an FDA ACE pump submission expected in “mid-2020” and clearance before the end of 2020. The 4Q18 call said design and testing would mostly complete this year, with an FDA submission in “2H20”; the implication today was no change in timing. As a reminder, t:sport is a miniaturized, screenless, wirelessly controlled tubed pump, which will include Control-IQ hybrid closed loop and iCGM integration (no new clinical data will be needed). The no-screen pump will be controlled via app on a user’s own phone. t:sport is half the size of the current t:slim; will switch to a syringe-driven pumping mechanism (a big manufacturing change for Tandem); and will add wireless charging, water resistance, an on-device bolus button, and an easier fill process. Closed loop will still run if the phone is out of range, keeping Tandem more competitive with the on-body system design of Insulet’s Omnipod Horizon. (t:sport will still have tubing, whereas Omnipod will remain tubeless.) Mr. Sheridan reiterated comments from Tandem’s September Analyst Meeting, noting that t:sport has tested well in the MDI population.