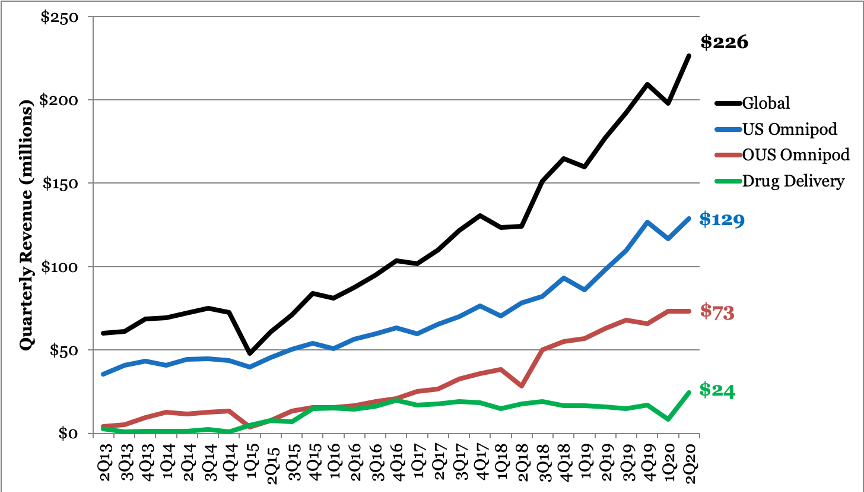 Insulet reported record total revenue of $226 million in 2Q20, rising a strong 28% YOY (+29% operationally) on a tough comparison to 42% YOY growth in 2Q19. Sales came in an impressive ~$10 million above the high end of the guidance range given in May. Revenue growth in this quarter was driven by 27% YOY growth in Omnipod revenue, which came in $6 million above the guidance range. US Omnipod sales drove 62% of growth, international Omnipod sales drove 21% of growth, and Insulet’s Drug Delivery business delivered the remainder (17%). The 31% YOY growth in 2Q20 is Insulet’s eighth straight quarter of >20% YOY growth, once again demonstrating consistency even as Insulet’s base grows and amidst the COVID-19 pandemic.

During today’s call, management raised full-year 2020 guidance for 17%-19% YOY growth – up from 15% – due to the higher-than-expected 2Q20 revenue and a stronger outlook for 2H20. This implies full-year 2020 revenue of $863-$878 million, representing a $22 million guidance raise at the midpoint. Impressively, today’s guidance also comes on the higher end of the guidance range given at the beginning of the year (i.e., before COVID-19) for 15%-19% YOY growth. Omnipod revenue is now expected to increase 18%-20% for FY20, with US and international Omnipod revenue growth raised to 19%-21% and 17%-19% respectively. Also driving this raised Omnipod guidance are the compounding benefits of higher-than-expected new Omnipod starts in 2Q20 and expectations for new Omnipod starts to bounce back further in 2H20. Specifically, new Omnipod starts in 3Q20 are guided for 30%-50% lower than start-of-year estimates – with the US closer to 30% and OUS closer to 50%. For 4Q20, Insulet is guiding for 25% fewer new starts than pre-COVID estimates, in line with 1Q20 guidance. If this guidance holds true and there continues to be a gradual improvement as the year continues, full-year new Omnipod starts for 2020 will be ~60%-75% of pre-COVID assumptions. Lastly, Drug Delivery revenue is expected to grow ~3%-6% this year.

After reporting a net loss in the first quarter of 2020, Insulet reported a net profit of $14.4 million in 2Q20, a nice improvement from net income of $1.4 million in 2Q19. Operating expenses in the quarter totaled $115 million, which was in line with expectations and similar to 1Q20 ($119 million). Operating expenses rose just 6% YOY compared to 28% YOY revenue growth – excellent operating leverage.

Insulet continued to increase manufacturing through 2Q20, though ramping of production has been slower due to COVID-19. Expectations for “enthusiastic demand” for Omnipod 5 (formerly referred to as Horizon) was cited as a reason for the continued investments. Though we had previously heard about a third production line expected to come online in 2020 it went unmentioned on the call; we’d guess the timing may be slightly pushed back due to the pandemic. As second highly automated US manufacturing line came online in 1Q20, with plans to gradually ramp production. As a reminder, Insulet’s new US manufacturing lines are part of a $200+ million investment to move Insulet’s global headquarters to Acton, MA. Additionally, the highly automated manufacturing lines are expected to be a key driver for Insulet to reach its long-term gross margin goals, while simultaneously driving redundancy.

1. “Approximately 65%” of US lives now covered; Dash drives “over 60%” of US patient adds in the quarter; continued positive trends in pharmacy, type 2s and MDI

Omnipod Dash drove “over 60%” of new US patient starts in the quarter, in line with numbers from 1Q20. Though Insulet saw new patients starts generally decline by ~50% from pre-COVID expectations, maintaining Dash uptake is a positive indicator for the company’s long-term success, as Dash is continuing to drive many positive trends for Insulet.

2. Broader international rollout of Dash pushed back to “early 2021”; users “love” the product in markets where launched

Insulet’s Omnipod Dash limited launch in Europe in the UK, Netherlands, and Italy has been successful and customers “love” the product. During prepared remarks, Ms. Petrovic noted Insulet’s international sales teams are focusing on training and necessary preparations to move forward with a “full market release” early in 2021. As we heard in 1Q20, Insulet has also pushed broader rollout of Omnipod Dash in Europe and Canada, initially slated for this year, back to “early 2021.” Additionally, Insulet was planning to enter five new markets in Europe and the Middle East this year, but due to COVID-19 those have also been delayed to “early 2021.”

1. Omnipod 5 powered by Horizon: “more than half” of participants have completed pivotal, results to read-out at ATTD 2021; no upgrade fee from Dash, but “we’ll see” about price premium

During prepared remarks, Ms. Petrovic shared that “more than half” of participants in Insulet’s Omnipod 5 hybrid closed loop have now completed the three-month pivotal study. The remainder of the participants are expected to complete by 4Q20. In Q&A, Ms. Petrovic also shared that results from the trial would likely be presented at ATTD 2021 (in February) and Insulet is in a “solid position” to launch Omnipod 5 (formerly referred to as Horizon) in the “first half of 2021” – in line with the timing given in 1Q20. As a reminder, Insulet paused the pivotal trial for Omnipod 5 in early March to address a “software anomaly”; the trial was resumed in early June.

In June, Insulet launched an update to Omnipod Dash that involved shipping new PDMs to existing Dash users. The updated Dash PDM includes three major new features: (i) automatic, wireless data uploading to Glooko whenever the PDM is connected to Wi-Fi; (ii) the ability to receive remote software updates over-the-air; and (iii) a Spanish-language interface. As noted above, the upgrade to Omnipod 5, however, will require a hardware change, rather than a simple over-the-air software update. See more about the Omnipod Dash update in our report from earlier this week.