Dexcom announced record 3Q17 financial results Wednesday in a call led by CEO Kevin Sayer, new CFO Quentin Blackford, and EVP Steve Pacelli. The main focus was on G6 (just filed with FDA, but now with a no-calibration launch potentially in 2018!) and the competitive impact of Abbott’s upcoming 4Q17 US launch of FreeStyle Libre.

Mr. Sayer boldly noted that “product innovation in 2018 promises to be the most remarkable year in Dexcom’s history.” Now that is saying something. He also went out of his way in concluding remarks to put 3Q17 in perspective: “I just want to make sure it is not lost on everybody. We had an amazing quarter – the biggest quarter in Dexcom’s history. Look at the cash we generated from operations. Look at the management of our expenses. Look at the gross profit and gross margin lines hitting the targets that we’ve established. The company had a wonderful quarter … There has never been a better time to be in our industry than we are now. Our confidence in our new pipeline … has never been higher.” We want to point out that for patients with access, life has also never been better, largely due to CGM.

Read on for the key highlights!

Dexcom’s worldwide revenue hit a record high $185 million in 3Q17, growing 24% YOY on a challenging comparison to 3Q16 (41% growth). The record performance smashed the previous record of $171 million in 4Q16, a very impressive achievement given the competitive environment. Sales grew 8% sequentially, in line with typical seasonality. Dexcom’s business seems to have reached a new “normal,” given the rising base of sales – YOY growth in 2017 has steadily been in the 23%-24% range in every quarter, a downtick from 43%-60% YOY growth in the first three quarters of 2016. (That said, 4Q17 will have the easiest YOY comparison this year – growth was 31% in 4Q16.) Management highlighted strong OUS momentum (see below), some upside as Medicare sales in the US start to ramp up in 4Q17, the base continuing to expand into MDI, and serious optimism for the 2018 pipeline. 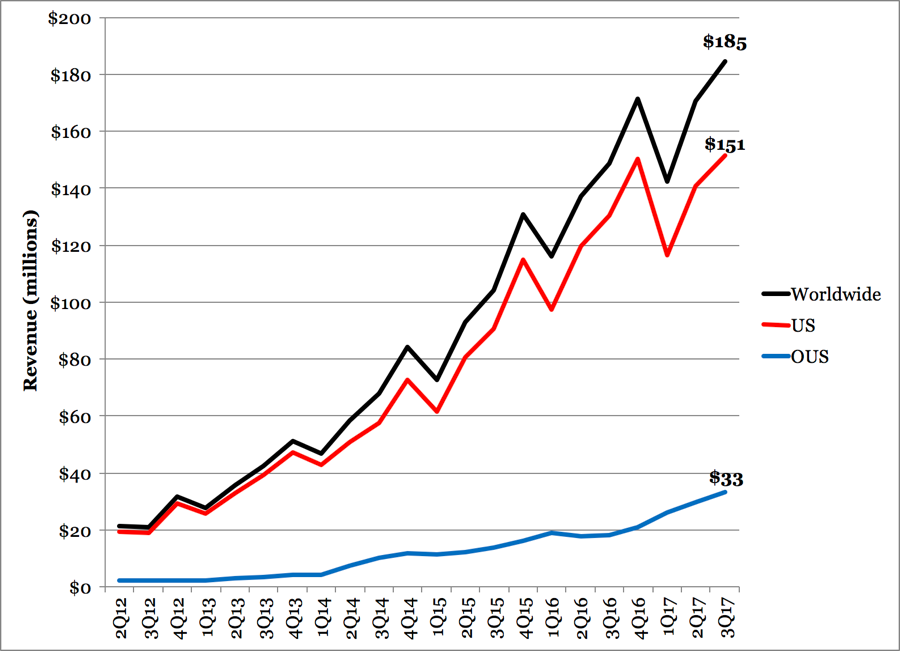 US sales of $151 million rose 16% YOY and 8% sequentially. This was a US sales record (just beating out ~$150 million in 4Q16), and although it marked the lowest US growth ever recorded in our Dexcom model, and three straight quarters with sub-20% YOY gains in US, this is expected as the base increases. The US business provided 58% of the quarter’s growth, also an all-time low for Dexcom (the previous low was in 2Q17’s 63%). We point out that 3Q17 did have a very challenging YOY comparison in the US (+44% YOY in 3Q16!), and initial Medicare hassles did disrupt the field sales force in the US. Indeed, Mr. Sayer commented that the “noise” from Medicare was “very real” – reps would go into offices and get a list of Medicare patients waiting to get on Dexcom CGM, but the impact on revenue won’t translate immediately.

International sales of $33 million hit a record high for the fourth straight quarter, rising an impressive 83% YOY, 12% sequentially, and driving a record 42% of Dexcom’s growth this quarter. Again, continued strong uptake in Germany was the driver – Dexcom now has access to 43% of covered lives in Germany, and will be over 50% by the end of the year. Mr. Sayer noted that revenue roughly doubled in all of Dexcom’s direct geographies, and in markets where it is competing head-to-head with FreeStyle Libre, sales were up over 80% YOY (this is what we mean by CGM visibility helping all players). In Australia, Dexcom believes it has >70% market share in terms of what the government is paying for. In the UK, Dexcom’s sales more than doubled YOY, even though Abbott recently secured FreeStyle Libre reimbursement on NHS. Sales in Canada also “more than doubled” YOY. Read more on the Dexcom-Abbott dynamics below.

Management “narrowed” 2017 sales guidance to the “lower end” of the previous guidance range: $710-$740 million (+25%-30% YOY). “Mid-teens” sequential growth is expected from Q3 to Q4, implying Q4 sales of ~$215 million, and 2017 sales just crossing the very bottom threshold of the guidance. Why the conservatism? (i) The timing of the Medicare ramp and the lower upfront revenue contribution from this patient base (i.e., a more meaningful sales impact won’t come until 2018) ; (ii) competition (i.e., FreeStyle Libre US launch in Q4); and (iii) uncertainty surrounding “partners” (presumably meaning what will happen with Animas’ customers). We continue to believe that all Animas pump wearers should at minimum be receiving information about all pumps and sensors, especially because the latest Medtronic sensor is not possible to get nor is the latest Medtronic pump – this is a Credo thing.

In a big win, Dexcom has now shipped the G5 CGM to more than 4,000 Medicare beneficiaries. Management aims to ship the remaining “close to 20,000” patients before the end of the year. This is a tremendous update from 2Q17, when only the first few “test case” shipments had gone through – hearing that thousands have gone out signals real progress in our view. Indeed, management said on the reimbursement front, “these early submissions have gone well.” We did not detect the uncertainty or frustration of prior calls, though Mr. Sayer apologized to Medicare patients who have “simply been waiting too long” – just another example of his great leadership. Obviously, there were a lot of administrative hoops to jump through, and it’s taken quite a while following the victory earlier this year but this is night and day from the prices of strips being slashed and quantities very limited for people 65 and over. As shared in 2Q17, therapeutic CGM billing codes are now in effect, meaning Dexcom does not need to use “miscellaneous” codes to get coverage. The pipeline is roughly the same size as in 2Q17, when it stood at “20,000+” – now that 4,000+ have been shipped, “close to 20,000” are remaining. We think with greater awareness, this number will increase – the government has a big push to expand awareness of the dangers of hypoglycemia and we believe this will increase awareness and demand of CGM.

7. How Will FreeStyle Libre in the US Impact Dexcom – A Category Builder, Paving the Way for Pharmacy and Factory Calibration, a Pricing Threat, A Different Patient Population?

A good portion of prepared remarks and most of Q&A addressed the impending US launch of Abbott’s FreeStyle Libre, following the sensor’s FDA approval in September (no calibration, 12-hour warmup, 10-day wear, non-adjunctive claim). Mr. Sayer and Mr. Pacelli made a number of points today, and we felt four in particular are worth emphasizing. First, the US remains a large, highly underpenetrated market for CGM – Abbott may well be an advantage for Dexcom as it drives category awareness in type 1 and type 2. Second, there is now a US regulatory pathway for CGM to completely replace fingersticks, something Dexcom can now be a fast follower on with G6 (see below). Third, Abbott may pave the way for sensors into the pharmacy channel, which has to date been an “uphill battle” for Dexcom. Last, Dexcom’s real-world sensor utilization with restarts – ~10-14 day wear – puts its pricing more on par with Abbott’s ~$5 per day. More direct quotes and thoughts below.

Just a few sentences today addressed Animas decision to exit the insulin pump market (last month). Dexcom believes it is “manageable” for the business. Animas’ contribution to Dexcom’s new patient additions “has been minimal for some time,” which comes as no surprise – the business will not be negatively impacted in a big way, unless of course many Dexcom/Animas users switch completely to Medtronic. On a positive note, Animas has historically been strong in pediatrics, which could be an advantage for Dexcom – the 670G is currently only approved for 14+ years (though the peds trial in 2-13 year olds has a near-term completion date in April 2018). Management added that “people chose an Animas pump for a reason,” which should also be an asset to Dexcom – e.g., they don’t want to be a Medtronic user, they specifically chose a different pump, they prefer the Dexcom sensor, etc. Medtronic has its own ongoing sensor shortage that is impacting new shipments until early 2018, another possible advantage for Dexcom. Partners Insulet and Tandem both have generous welcome programs for Animas users, including a $200 gift card from Dexcom. Overall, we agree this exit is not that bad for Dexcom and “manageable” felt appropriately conservative. We continue to be surprised by J&J’s offer, overall, to patients, given J&J’s original commitment to people with diabetes – night and day from when the company purchased Animas.

9. G6 Filed with FDA, Pathway for No Calibration Version to Launch Before the End of 2018; Multiple Options Under Discussion with FDA

Dexcom submitted the G6 sensor (one calibration/day) to the FDA at the end of 3Q17, as expected. In big news, there is a regulatory path to launch a “no calibration” G6 “sometime before the end of 2018.” This has come up following conversations with the Agency, presumably in light of the FDA approval of Abbott’s factory calibrated FreeStyle Libre. Dexcom is still in discussions with the FDA, and management said there are “a bunch of pathways” and the team has “been given clear direction and clear guidance” from the FDA. One option is getting the one calibration per day G6 approved, and then filing a supplement to get a no calibration G6 approved. An alternative is to skip right to the no calibration version, depending on the timing in 2018. Mr. Sayer suggested that if this would allow a no calibration G6 launch before September 1, 2018, “or something like that,” it might be the path forward. This will come down to timing and FDA discussions, since (as noted above) Dexcom does need something new and compelling in the US. These remarks were also clearly intended to assuage investors: “We just want to let everybody know that we will have a no calibration system out relatively soon. We will meet that need with real time CGM.”

The first-gen sensor with Verily is expected to complete development in 1H18. A commercial launch now depends on the G6 no calibration regulatory strategy. As a reminder, this product has long been positioned as a “2018” launch, though we wouldn’t be surprised if it gets pushed back a bit – unless G6 is approved quite quickly next year. The first-gen will move to a fully disposable transmitter, and Dexcom will have to make a decision about 14-day vs. 10-day life within the next six months. We assume this first-gen product will maintain an insulin dosing claim, and therefore, presumably cross over to Dexcom’s current installed base of intensively managed users. Previous remarks have positioned it as a type 2/non-intensive product, though given the major improvements, current Dexcom users are obviously going to want it. 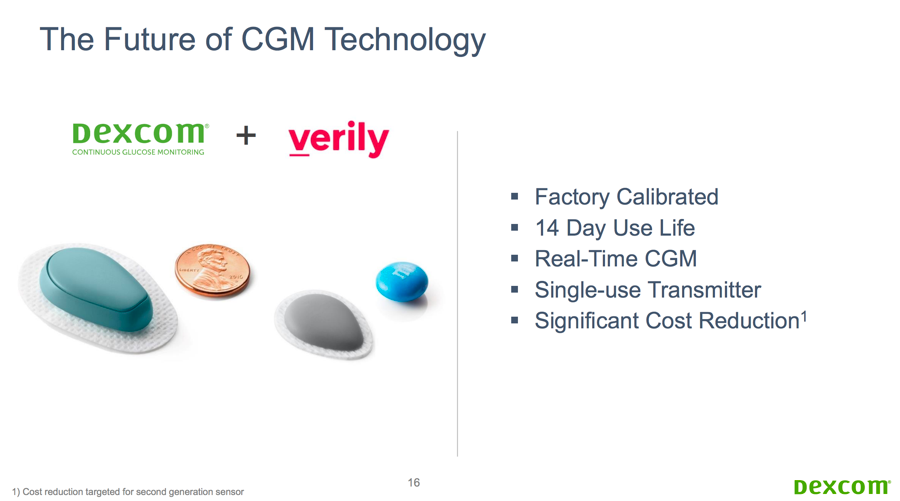 In Q&A, Mr. Sayer mentioned briefly that the G5 touchscreen receiver has launched (in line with expectations). We had previously thought this receiver was less expensive to make, but today’s comments didn’t confirm that – Mr. Sayer only said “the actual cost profile” is not “any higher,” though the warranty return rate on it will be much less significant. This more durable receiver is larger and definitely loses the cool factor of the current slim receiver, but it does help with the three-year durability requirement from Medicare, fixes previous reliability issues, and brings a user interface in line with the G5 app. The receiver was on display at ADA (picture below) and the bulkier form factor took us by surprise – we had expected something sleeker. We’d have to assume it will encourage even more patients to move to the phone, which benefits Dexcom’s business. The device received FDA approval in March. 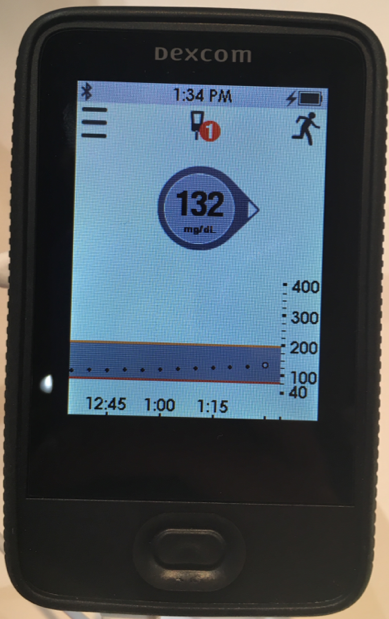 The following Dexcom R&D partners were succinctly mentioned at various points during the call, though there were no updates on product details or timing. We include quotes and links to recent coverage below.