Medtronic reported its 3Q19 (F2Q20) financial results this morning on a call led by CEO Omar Ishrak. Diabetes is slide #10 and you’ll find our highlights below. 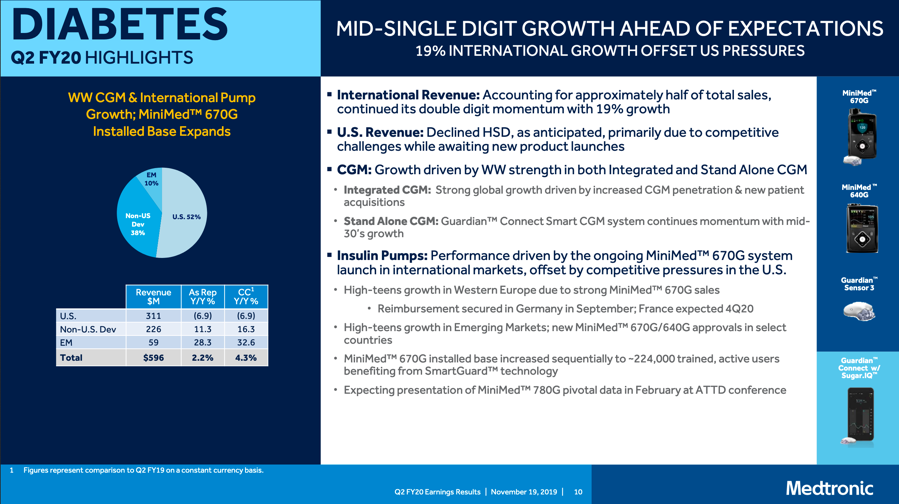 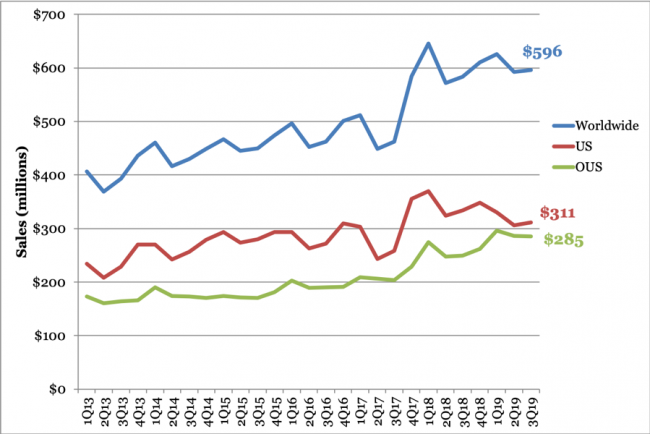 Medtronic reported worldwide Diabetes revenue of $596 million in 3Q19, rising 2% YOY as reported and 4% operationally on a very tough comparison to 26% YOY growth in 3Q18. The strong growth one year ago (3Q18) came from US adoption of MiniMed 670G, which has since tapered – in part due to the disappearing Animas opportunity in the US and strong competition from Tandem’s Basal-IQ, Insulet’s Dash, Dexcom’s G6, and Abbott’s FreeStyle Libre. Sequentially, revenue rose $4 million (+1%) from 2Q19. Medtronic’s Diabetes revenue has stayed fairly steady around $600 million for the past eight quarters now. 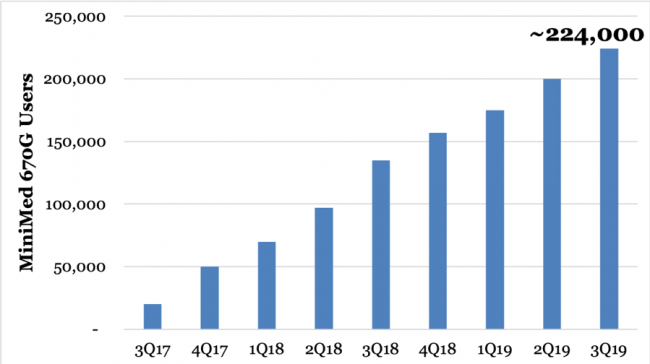 3. Guidance Lowered to “Low Single-Digit” Operational Growth for FY20, “Flat to Slightly Down” in 4Q19

Medtronic is now guiding for “low single-digit” operational growth for Diabetes in FY20 (April 2019 – April 2020), down meaningfully from the 6%-8% guidance given in the previous two quarters. CFO Karen Parkhill cited “competitive pressures” and waiting for new product approvals as reasons for the lowered guidance as well as lower revenues due to deferred revenue given upgrades. Though the YOY comparisons ease up into 4Q19 and beyond, Medtronic is guiding for Diabetes revenue to be “flat to slightly down” in 4Q19. With the impending launch of Tandem’s Control-IQ (expected 4Q19) and Abbott’s FreeStyle Libre 2 (still under FDA review), Medtronic’s competitive pressures in the US will only get bigger though the market will surely continue to expand – the closed loop is a fantastic improvement for virtually anyone on MDI in our view. Improving Medtronic’s CGM offerings and MiniMed 780G will be key to re-vitalizing Medtronic’s Diabetes business in the US.

During the quarter, Medtronic announced two major leadership changes. In August, Medtronic announced that CEO Omar Ishrak would step down in April 2020 (end of FY20), to be replaced by EVP of the Restorative Therapies Group Geoff Martha. Two months later, it was announced that Diabetes President Hooman Hakami was departing the company, effective immediately, replaced by Sean Salmon. Mr. Salmon was not on today’s call to answer questions, as he is new to the position, but incoming CEO Geoff Martha provided the following prepared remarks. Mr. Salmon previously served as SVP and President of Coronary and Structural Heart (CSH) within Medtronic’s large Cardiac and Vascular Group. He is a 15-year Medtronic veteran, and is highly regarded from our conversations with multiple team members at different levels and slightly under the radar screen given his senior role. In his previous role, Mr. Salmon was in charge of ~11,000 employees and a $3.7 billion per year business, ~50% bigger by revenue than Medtronic Diabetes ($2.4 billion in revenue in FY19) though not its own separate division like Medtronic Diabetes .

The MiniMed 780G advanced hybrid closed loop has completed adult pivotal trial recruitment – management said that some data will read out at ATTD 2020 in February, though in an email afterward, we learned that this might be international 780G data rather than US pivotal data. Management also said that 780G “hardware” has also been submitted to the FDA. Considering the pump body itself has the same size and form factor as the 670G, we assume this is mostly to get the addition of Bluetooth cleared, prior to the closed loop pivotal trial data. It’s also possible Medtronic is going for an ACE Pump indication for the 780G pump itself, following the pathway Tandem has taken with Control-IQ – i.e., get the pump and CGM components cleared, and once the pivotal data reads out, it will be the last component to be submitted to FDA and approved. At DiabetesMine’s 2019 Innovation Summit earlier this month, the 780G study design was described as “single-arm, 150 patient study for ages 14+.” Approval for “adults” is expected to come first (unclear if that’s 14+ or 18+ years), with pediatric approval following (7+ years). On ClinicalTrials.gov, the study has a primary completion date of January 31, 2020 and is enrolling for 7+ years of age. 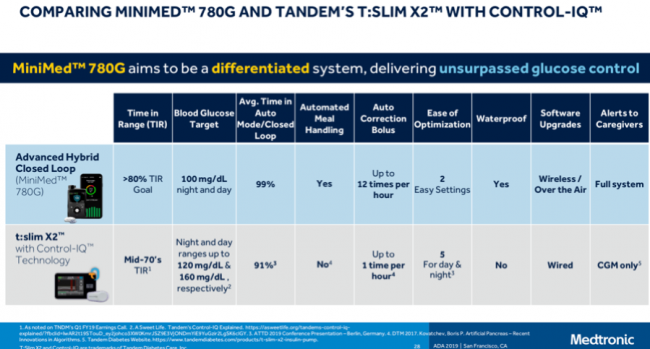 With MiniMed 780G dominating pipeline discussion, other projects mentioned in the ADA Analyst Briefing were not mentioned. All slides below are taken from that presentation in June.

Q: To focus on the change of guidance in Diabetes, could you go into a little more detail on what specifically has changed and driven the reduction in the guidance here? Maybe a sense for US, OUS assumptions in the back half? And then more broadly on Diabetes, how does this impact your view on the future growth rate of Diabetes, say, in fiscal 2021?

Karen Parkhill (CFO): Omar did talk about the fact that we're facing competitive challenges in the US in Diabetes while we await new product launches, but international growth continues to grow well. You saw that in our results, and we expect that strong international growth to continue. In the meantime, in the US, Omar mentioned we did initiate a Next Tech Pathway which you also may have seen advertised. That means that we'll defer some revenue until we can upgrade those patients to the new technology. And in terms of future growth for Diabetes, we believe that will follow our robust pipeline, and we expect growth acceleration in that business with the pipeline as we do in many of our other businesses.

Omar Ishrak (CEO): I just want to be very clear that we're very excited about this pipeline. The 780G promises to be an outstanding product. We're making good progress in terms of our enrollment in the pivotal trial. We've already submitted our next-generation hardware for approval with the FDA. And so, that whole pipeline is on track, and we're going to go through a period of some pressure, especially with new patients in the US. But look, there should be no doubt about our enthusiasm for this pipeline and what we see into the future in Diabetes. As Geoff pointed out earlier, this is an area of focus of for us, and one that we will win in.

Q: Maybe one on the 3Q guidance here…Diabetes, flat to down. How much of that flat to down is assuming a share loss vs. the upgrade program? I assume you're deferring revenue recognition. Are you seeing any delays in FDA approvals because one of your other competitors seems to be having issues on the diabetes side from a regulatory perspective?

Ms. Parkhill: […] In terms of Diabetes, the upgrade program is an impact for us in the third quarter. And in terms of market share, our installed base is increasing, particularly as we put 670Gs in Europe. So, we're seeing an installed base increase and we're pleased with that.

Mr. Ishrak: In terms of product launches, right now, we're on track. The most important product launch we have is the 780G. And like I mentioned earlier, we've already submitted our next-generation hardware for approval to the FDA. We've completed adult enrollment, and we expect to see the initial pivotal trial results at the ATTD meeting in Europe in February. And we expect adult approval first, and the ped approval will follow that.

Look, the exact timing is up to the FDA. There's no signal to us that things will be unnecessarily delayed or anything like that. So, as far as we can see, things are progressing as normal. They have their normal questions and we go through this process. So I don't see anything out of the ordinary there.

Q: On Diabetes, I appreciate the confidence in recovery there, returning to growth as you move into next year. But, I guess, even when one thinks about the competitive landscape in Diabetes, there's going to be developments from your competitors on automated insulin delivery systems as well. How confident are you that 780G can get you where you need to go? Do you need to have improvements on the CGM side of that business in particular in order to see improving results?

Mr. Ishrak: I think 780G will take us a long way, and it actually differentiates us in terms of the algorithm over anything that anyone has or from what we can see projecting. And so the advanced hybrid closed loop system is really going separate us from that dimension. I think with the sensor area, we still have work to do. And I think that's going to take a little longer in reducing the number of fingersticks we continue to make progress. But that's going to be an area of pressure even going into next year. But we expect that there are many other benefits of the 780G in terms of not only the algorithm, but in terms of its capabilities that we will benefit from. So, that's the way I'd look at it. The sensor area is going to take a little longer to completely resolve and make incremental progress, but that's going to take just a little longer.