Importantly, 69% of REWIND participants did not have baseline CVD, which represents a sizable increase over the primary prevention populations enrolled in other completed GLP-1 CVOTs. Aside from REWIND, the EXSCEL CVOT for AZ’s Bydureon enrolled the largest primary prevention cohort at 27% (see table below). And while the age, BMI, and diabetes duration of REWIND’s population are not very different from other GLP-1 CVOTs, the baseline A1c in REWIND was very low at 7.3% – compared to 7.7% for ELIXA, 8.0% for EXSCEL, and 8.7% for HARMONY, SUSTAIN 6, and LEADER.

Overall, this overall lower-risk population makes REWIND much more generalizable than prior CVOTs. The “real-world” applicability of these results, we agree, is exciting: It seems to us that REWIND supports the use of Trulicity, and possibly other GLP-1s, to prevent cardiovascular disease in the first place, not just to prevent CV events in those with baseline CVD. We’ll be very interested to see any analyses (such as this, for SGLT-2 inhibitors – a presentation called  “Are Diabetes CVOT Results Generalizable? Analysis of Eligibility Requirements of SGLT-2 Inhibitor CVOTs (EMPA-REG, CANVAS, DECLARE) Suggests Not,” by Dr. Eric Wittbrodt at ACC earlier this year) of what proportion of diabetes patients overall would have qualified for REWIND.

The generalizability of CVOT results has emerged as one of the biggest scientific and clinical questions in diabetes. Historically, these trials have enrolled very high-risk patients to achieve a high event rate. REWIND balanced its lower-risk population against a median follow up of 5.4 years, which is almost two years longer than the next-longest GLP-1 CVOT (LEADER; 3.8 years). As such, the only GLP-1 agonist to garner a CV indication to date – Novo Nordisk’s Victoza – was limited to use for CV risk reduction in those with established cardiovascular disease.

At this point in time, however, REWIND results do come with a big caveat: There is no data available on effects seen in the primary vs. secondary prevention cohorts, nor is there an interaction statistic available. Dr. Philip Home aptly pointed out to us that if the 31% of participants with prior CVD were followed for 5.4 years and saw a hazard ratio advantage similar to that of SUSTAIN-6 and HARMONY, then the number could be sufficient to give statistical superiority for the whole study even if the non-CVD group saw no benefit whatsoever. Of yet, generalizability is more of a possibility than a definite. Combining high and low risk populations, he says, comes with this inherent challenge.

We’re very hopeful that REWIND results can, more than previous studies, bring attention to the issue of diabetes and cardiovascular disease. Of course, diabetes in and of itself is a risk factor for CVD, but studies have shown that awareness of this connection is less than ideal. Moreover, both GLP-1s and SGLT-2 inhibitors – both have which have demonstrated cardioprotection – should be used more broadly to lower CV risk.

Given that Novo Nordisk has cited Victoza’s CV indication as a key factor in sustaining – and even boosting – Victoza sales in the face of Ozempic’s launch, we would expect a primary prevention indication to be a sizable commercial tailwind for Trulicity. Of course, Trulicity has done well regardless: Lilly’s GLP-1 recently became the US market leader by volume and sold $780 million on a steep upward trajectory in 2Q18.

We do wish that more information could be given in “topline” releases: we’ll have to wait nearly eight months to learn more about REWIND results, which Lilly hopes to present in full at ADA 2019 in San Francisco. There’s no doubt that these findings should impact clinical practice, and we would be glad to see that happen sooner rather than later – if we were practicing medicine, we do think that this release would make it more likely that we’d prescribe Trulicity. We note that topline releases for EMPA-REG OUTCOME, DECLARE, LEADER, EXSCEL, and SUSTAIN 6 also did not contain even topline numbers. As far as we know, there was no topline release for CANVAS or HARMONY ahead of result presentations.

From the accompanying infographic released with the REWIND announcement: 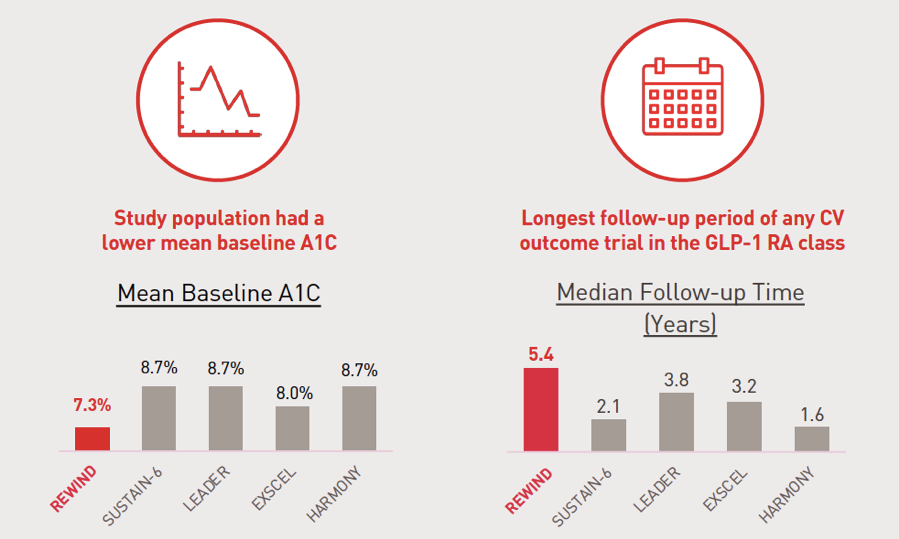 --by Ann Carracher and Kelly Close