Hello from Madrid, Spain, where ATTD 2020 officially kicked off this evening! See our top highlights from the day from corporate symposia hosted by Abbott and Medtronic and the opening ceremony.

At Wednesday afternoon’s Abbott-sponsored symposium, Dr. Tadej Battelino (Ljubljana University) told the audience to put DCCT in the “history drawer part” of their brains. To start out his presentation, Dr. Battelino emphasized the detrimental effects of hyperglycemia, in fact using data from DCCT to tie higher rates of complications (e.g., cardiovascular disease, cognitive impairment) with higher A1cs. On the other hand, Dr. Battelino presented data showing non-severe hypoglycemia was protective against cognitive dysfunction, while severe hypoglycemia had no significant effect. Thus, Dr. Battelino summarized the challenge of managing diabetes: lower A1c (i.e., reduce hyperglycemia) while avoiding severe hypoglycemia. Then, Dr. Battelino caught the audience off guard, telling them to put DCCT in the “history drawer part” of their brains. Dr. Battelino was specifically referring to the DCCT finding that rates of severe hypoglycemia increase with decreasing A1c. In a telling graph (see below), Dr. Battelino overlaid data from multiple CGM studies with the same DCCT graph showing a rapid increase in severe hypoglycemia rates as A1c decreased. The CGM study results (circled below) showed no differences in severe hypo rates, whether A1c was above or below 7%. Additionally, the rates of hypoglycemia were markedly lower in the CGM studies compared to DCCT. Given the setting of an Abbott-sponsored symposium and Dr. Battelino’s focus on severe hypoglycemia, we were somewhat surprised we didn’t hear any mention of Abbott’s FreeStyle Libre 2, which adds optional high and low alarms in the same form factor as the original FreeStyle Libre. 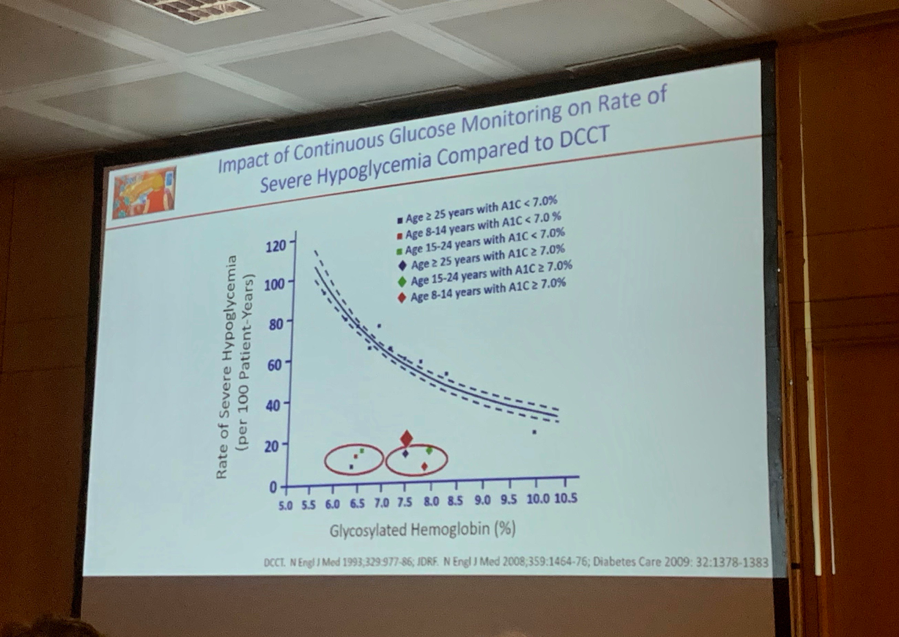 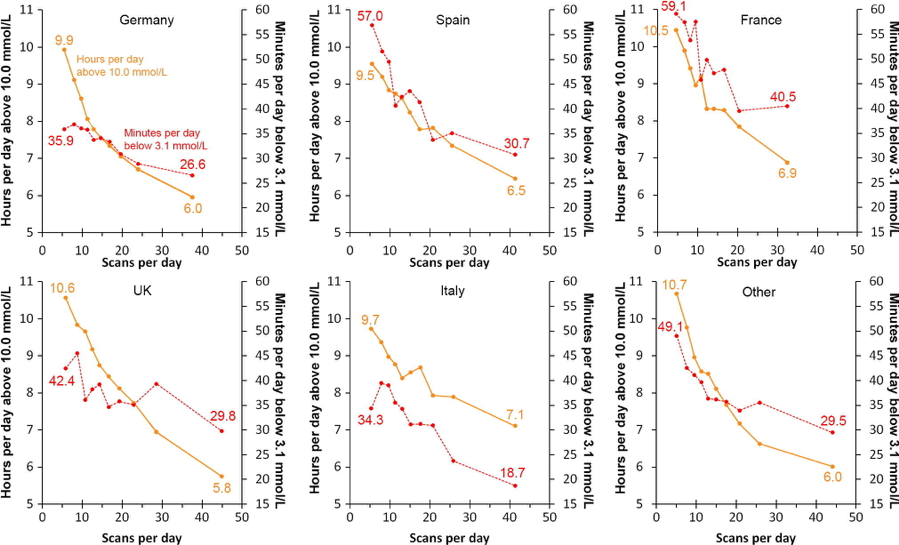 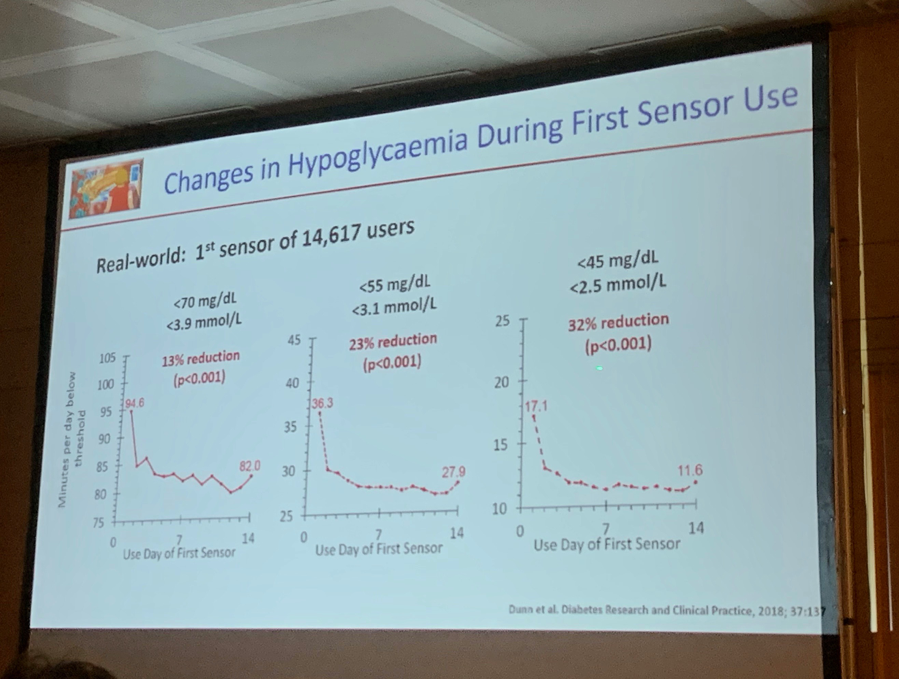 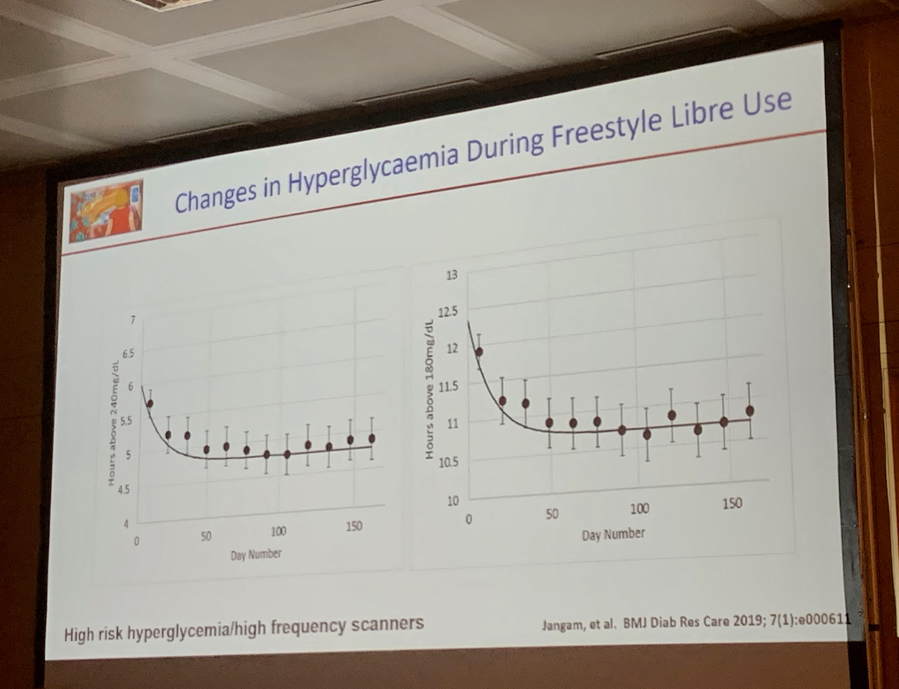 Medtronic’s Dr. Simona de Portu presented some of the first cost-effectiveness data from the single-arm Portuguese ADJUST study of the iPro 2 professional (blinded) CGM, highlighting that blinded CGM could reduce costs for patients, over the long-run, by ~€5,000 (~$5,397) due to avoided diabetes-related complications, along with delaying the onset of complications by roughly one year. Medtronic used healthcare consulting company IQVIA’s Core Diabetes Model, an increasingly popular health-economics simulation model, to compare the cohort of patients that received blinded CGM to a hypothetical cohort of patients that did not receive it. The model assumed that patients who received iPro 2 had three blinded CGM visits per year and that that patients who did not receive the professional CGM maintained a flat A1c and visited a doctor four times per year. The model also took into account the costs of the insertion/ review of the data after one week for patients who received the blinded CGM. When comparing the two cohorts, Medtronic found that the blinded CGM resulted in an incremental cost-effectiveness ratio of €6,767 /QALY (~$7,304), an increase in quality-adjusted-life-years (QALYs) from 8.49 to 8.58, and reduced the costs of complications from €68,699 (~$74,150) to €68,084 (~$73,486). To put some perspective on these numbers, Dr. Portu mentioned that the Portuguese government is willing to pay for a medical intervention if it demonstrates an ICER of €50,000/QALY. This amounts to a roughly seven-fold cost differential that blinded CGM can provide for the same impact! Even more impressively, these findings stayed constant when the time horizon of the analysis changed by five, ten, or twenty years, when the assumed cost of complications was increased or decreased by 20%, or when the discount rate was altered. These findings illustrate that despite the increased administrative costs that result from visiting HCPs, purchasing a blinded CGM, and inserting/removing the device, these costs were partially offset by a meaningful reduction in complications and improvements in quality of life.

At the same Abbott-sponsored symposium as above, Dr. Tadej Battelino (University of Lubljana) polled the audience before and after the symposium on several questions related to enthusiasm for and adoption of CGM. The pre-symposium survey revealed that speakers Drs. Tadej Battelino, Rich Bergenstal, and Ramzi Ajjan had a tough job: the audience was already incredibly enthusiastic and knowledgeable about CGM. Before the session started, 64% of the audience rated themselves as either “reasonably knowledgeable and very good level of expertise” or “an expert and extremely knowledgeable” about the “technical aspects and clinical indications” for CGM. Perhaps more impressively, more than half (58%) of the audience said that they “currently recommend and/or prescribe” CGM to >60% of their patients with type 1 diabetes – we’d love to know how many of those recommendations/ prescriptions are actually turned into CGM users. By the end of the session, a larger majority (71%) of the audience said they were likely to recommend and/or prescribe CGM to their type 1 patients. Not surprisingly, the numbers were a bit weaker for insulin-using type 2s at the high end, though the differences in “average opinion” of this group was huge: specifically, 23% of the audience said they recommend and/or prescribe CGM to >60% of those patients; this number more than doubled to 57% by the end of the program. A full breakdown of these questions is in the tables below. The impressive audience knowledge is a testament to the incredible momentum seen in CGM over the past decade – in Dexcom’s most recent quarterly call, we got our first update on Dexcom’s user base in over ~two years. Dexcom’s global user base is “approaching 650,000”; combined with Abbott’s two million FreeStyle Libre users, the number of global CGM is well across the 2.5 million mark. At the end of 2018, we estimated ~1.5 million global CGM users and at the end of 2017, we estimated the user base at “just” 0.7-1.0 million. 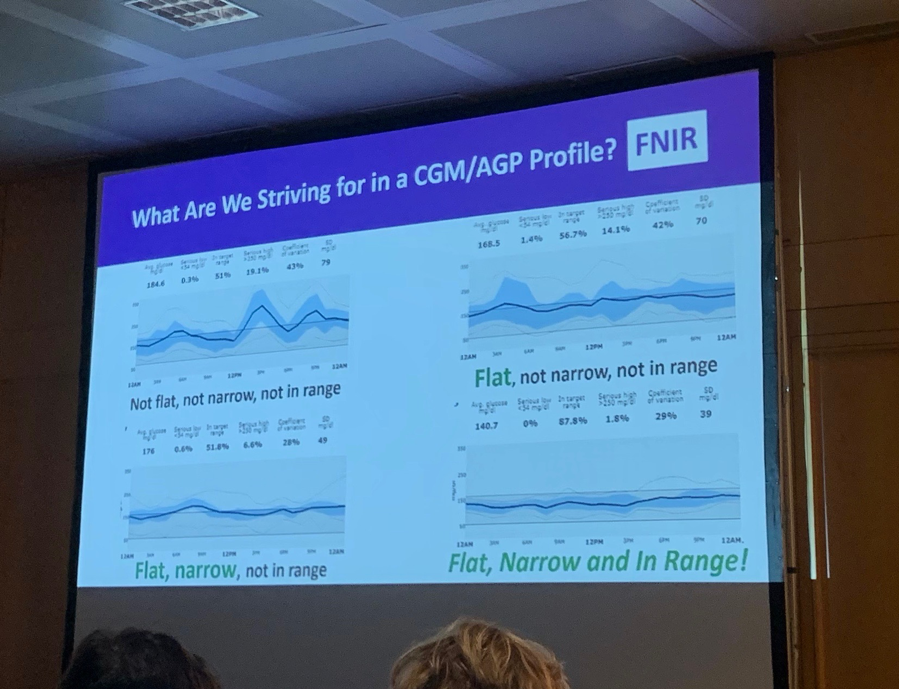 My current understanding of the technical aspects of and clinical indications for sensor-based CGM in persons with diabetes is:

Pre-program question - among all persons with type 1 diabetes, the percentage in whom I currently recommend and/or prescribe sensor-based CGM is:

Post-program question – based on my engagement with the content and expert-based presentations provided in this educational program, among all persons with type 1 diabetes, the percentage in whom I am now likely to recommend and/or prescribe sensor-based CGM is:

Pre-program question - among all persons with insulin-requiring type 2 diabetes, the percentage in whom I currently recommend and/or prescribe sensor-based CGM is:

Post-program question – based on my engagement with the content and expert-based presentations provided in this educational program, among all persons with insulin-requiring type 2 diabetes, the percentage in whom I am now likely to recommend and/or prescribe sensor-based CGM is:

The highly regarded Dr. Fiona Campbell (Leeds Children’s Hospital) highlighted two clinical case studies demonstrating the behavioral modifications that Medtronic’s Envision Pro CGM can enable in CGM-naïve adolescent populations. Dr. Campbell contextualized her talk by addressing the enormous burden healthcare providers face in making clinical data relevant and actionable to patients. We appreciated her candor on this front and acknowledgement of how hard positions are for healthcare providers. As patients also tend to view meeting with their clinicians as the most important component of care (according to Dr. Campbell), using technology such as professional CGM that enables both parties to view data together and to collaborate in shared decision making is critical, stressed Dr. Campbell – we certainly agree if these conversations are well set up and patients can discuss the data on an equal footing to the provider.

In the following examples, Dr. Campbell first provided a description of the patient’s demographics, unique lifestyle needs, and specific difficulty in managing diabetes care. Each patient was then placed on the Envision Pro CGM (CE-Marked at EASD 2019) for approximately one week. During a follow-up visit, Dr. Campbell asked the patient to summarize the data, acknowledge any surprises, and suggest meaningful treatment changes. Dr. Campbell even switched seats with the patient to facilitate the patient’s role as a “teacher” who could then actively identify opportunities for improved care – what a patient-centric approach to care!

Arguably, the most informative feature of utilizing the Envision Pro which Dr. Campbell is its CareLink Pattern Snapshot feature (launched in November 2015), which provides the top three trends identified over the week-long period along with potential causes. The software then provides a number of suggestions: (i) oral medication(s) too high or incorrectly timed?; (ii) basal insulin injection in evening(s) too high or missed?; (iii) pre-breakfast insulin incorrectly timed, incorrect dose, or missed?; (iv) insulin to carbohydrate ratio not optimal for pre-breakfast insulin?; (v) inconsistent food intake?; and (vi) exercise around breakfast time? Wow! Patients can also log food, medication, and physical activity. Dr. Campbell mentioned that these features enabled her patients to pick distinct places in the clutter of blood glucose data where they were struggling with diabetes management and critically think about meaningful changes they could make with respect to medications, lifestyle, and other self-care behaviors. We have heard how popular Carelink is among doctors (with some, perhaps even more popular then the technology) and getting this insider view was very helpful.

Conference co-chair Prof. Moshe Phillips kicked off this year’s opening ceremony with several stunning statistics on ATTD’s rapid growth. Despite this only being the meeting’s 13th congregation, over 3,800 participants from more than 81 countries are in attendance this year. In total, 615 abstracts were submitted, and the conference will feature 26 scientific sessions, 10 oral sessions, and 14 industry symposia – wow! These statistics were met with enthusiastic clapping, and throughout the day, we’ve chatted with conference goers who all agree that ATTD has quickly become one of the most impactful meetings in all of diabetes, indicative of the powerful momentum behind diabetes technology. (We do point out we were saying this back in 2010 – write us at info@closeconcerns.com if you’d like copies of our “full reports” for ATTD since 2009.) As Prof. Phillips noted, ATTD is particularly focused on innovation and interaction with broad groups of industry and other stakeholders is a mainstay of the meeting – whether that be up-and-coming start-ups or longtime veteran organizations in the field. For those of you who aren’t able to make it to this year’s meeting, we highly recommend you check out the online Education Portal, which will house a selection of the materials being shared. The app is fantastic and will keep you abreast of the sessions that are live-streamed!

“The temperament and usual habits of the patient should be considered in the type of treatment chosen and our object should be to interfere with these as little as is compatible with health… I know that full physiological control of severe diabetes – the most continuously normal blood sugar and the least hypoglycemia – can be obtained with 4-6 small injections of soluble insulin in the 24 hours.”

While the means and quality of insulin injection have certainly changed since then, the goals physicians aimed for even 50+ years ago continue to play a role in modern research and care. Similarly, Dr. Skyler highlighted Dr. Ted Danowski’s 1978 Diabetes Care paper “Jet Injection of Insulin During Self-Monitoring of Blood Glucose,” which was the first publication to champion the basal-bolus concept and self-monitoring of blood glucose. As Dr. Skyler put it, “the concepts were all there in 1978.” This framework gave incredible perspective to how far diabetes technology has come in the last 100 years to meet the goals and ideas that have been in discussion for so long. With the advent of closed loop systems, smart insulins, and more, we so look forward to seeing where the field will go in the next 100 years. We highly recommend visiting ATTD’s Facebook page where a video of the presentation is already up! 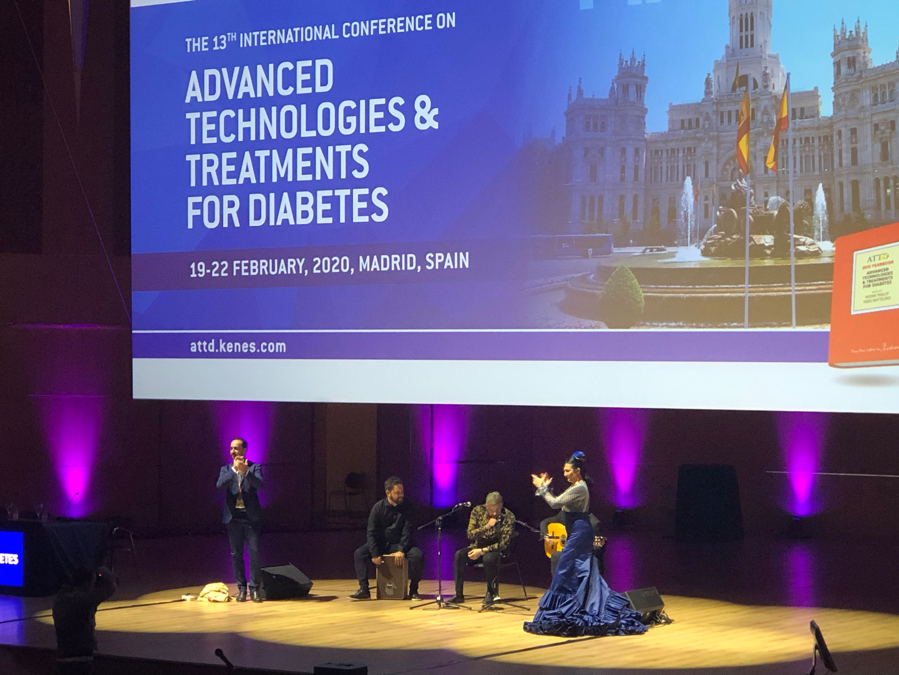