Capillary Biomedical recently informed us that it has closed a $2.9 million angel round, which will support development of its three-day, “kink-proof,” multi-port “sprinkler” design (multiple holes along the side of the catheter) infusion set through FDA clearance. The company tells us that “if all goes well,” the “SteadiSet infusion set with SteadiFlow technology” could hit the market in late 2019, though additional funds will be needed to scale up manufacturing for commercial launch. The company has been conducting JDRF and NIH-funded studies in swine since 2016 and will soon begin human clinical testing.

In a fascinating interview with us, Capillary Biomedical’s VP Marketing Mr. Mark Estes (formerly Chief Product Architect at Asante) explained how the SteadiSet aims to address three factors that contribute to the infusion set’s long-held title of “The Achilles heel of pump therapy.”

An ADA 2018 poster hinted at the possible clinical benefit to these features: In swine, boluses delivered by the SteadiSet cannula had greater surface area than did those delivered by a Unomedical’s Inset (~275 mm2 vs. ~175 mm2; p=0.018) , plus the SteadiSet cannula never kinked vs. 18% kinking with the Inset. Nice! Mr. Estes said Capillary and collaborator Dr. Jeffrey Joseph (Thomas Jefferson University) have gathered histology data showing the SteadiSet cannula has a reduced wound response vs. Teflon cannulas – results have been submitted for publication at an upcoming professional meeting.

With respect to user experience, Mr. Estes suggested SteadiSet “would not look out of place next to other recent excellent designs like Abbott’s FreeStyle Libre sensor, Dexcom’s G6 inserter, and/or the MiniMed Mio Advance.” Based on the packaging below, it looks a lot like the round FreeStyle Libre applicator, where a user pulls off the tape, presses the applicator into the body, and pulls it off the body with the needle hidden and retracted. (The best applicator we’ve seen lately is Dexcom’s G6 and the new Medtronic/Unomedical Mio Advance – available in select OUS countries since ATTD.)

Capillary Biomedical intends to ensure broad access to its technology by white labeling its infusion sets for “all the [pump] players.” That is, it will ship infusion sets with appropriate connectors and packaging to pump companies to distribute, similar to how Unomedical currently operates. (And in contrast to BD, which distributed its FlowSmart infusion set exclusively through Medtronic.) The plan is to price similar to current sets and use the existing reimbursement pathway. While integrating the SteadiFlow cannula technology into patch pumps may also be possible, this would be a “a more complicated process” requiring “extensive collaboration.”

A big portion of the research on this set to date – testing in a swine model at Thomas Jefferson University – was funded by a $1.5 million grant from JDRF. At the time, Capillary Biomedical co-founders Mr. Paul Strasma and Dr. Jeffrey Joseph told us that they aimed to develop a catheter that could be worn for 7+ days, reduce trauma upon insertion, heat the skin to increase local circulation, and vibrate to break up tissue obstructions. Mr. Estes noted that the company still intends to extend wear beyond three days in its second-gen product – which could eventually open the door to all-in-one CGM sensor-infusion set combos – but the other features remained areas of ongoing research. Early research on steel needles was funded by an initial NIH SBIR Phase I grant and the company was recently awarded a Phase II grant to investigate insulin absorption over extended durations using the hyperinsulinemia/euglycemic clamp PK-PD study technique.

We are very excited to hear Capillary is eyeing commercialization, as there has been very little innovation on the catheter side of infusion sets in the past decade. The science here seems solid and will address real, tangible issues with sets. While user experience around insertion and detachment has improved a bit – most recently with Medtronic/BD’s MiniMed Pro-set and Medtronic/Unomedical’s Mio Advance ­– there has been very little in the way of kink-proofing or improving consistency of insulin delivery. As more people move to hybrid closed loop, especially at younger ages, the need for outstanding and reliable infusion sets and cannulas is only going to grow. 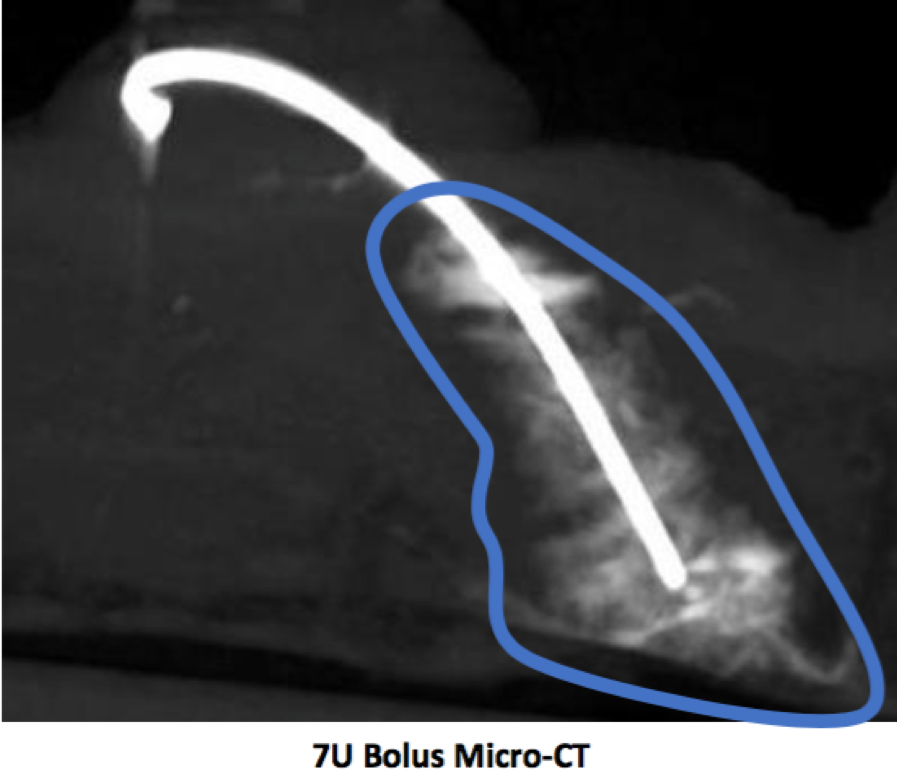 Close Concerns: Can you provide us an update on Capillary Biomedical and the SteadiSet infusion set in particular? What features are you looking to bring to market in a first-gen product?

A: With our Series Seed financing wrapped up, we’ve moved into our first headquarters and shifted our focus to development and commercialization of our first-gen SteadiSettm infusion set product.  The Cove incubator hosted by UC Irvine’s Applied Innovation group was a great place to support our initial prototype development and our animal work with Thomas Jefferson University. After testing more than 300 infusion sets in over 30 swine, we figured out what works and what does not.  We now have a much better idea of what goes on under the skin with CSII and have a design in process that we hope addresses the issues that have always made infusion sets the weak link in pump therapy.

The short version of what we learned is that an infusion set is like a splinter and the normal wound response of the body over time poses an ever greater challenge day-by-day for insulin to reach intact capillary and lymph vessels where the body can absorb it. We also learned that a bolus infused through a traditional single-port cannula makes a spherical pool of insulin at the tip, which happens to be where the wound response is the greatest. Our answer to that is two-fold: (i) Make the cannula out of a much softer material to reduce the wound response; and (ii) Add additional holes on the side of the cannula to spread out the insulin over a greater surface area of subcutaneous tissue. However, both of these structural changes increase the likelihood of the cannula kinking and collapse. Thus, we added a wire coil reinforcement that is internal to the cannula to make it kink-proof. The result is an infusion set that we believe will more reliably deliver, be more comfortable to wear, and help the body absorb insulin more predictably.

Close Concerns: Where are you in the development process?

A: We are at the point where we have molded parts (vs. 3-D printed prototypes used in prior animal studies) and are preparing to sponsor our first human clinical study.

A: In our testing at Thomas Jefferson University, we have demonstrated a significant increase in the surface area of a bolus of insulin infused through our multi-port cannula vs. a commercially available Teflon infusion set. This was presented in our 2018 ADA poster. That same study/poster also showed no kinking with our cannula vs. about 20% of the Teflon cannulas developing a kink. The same testing further showed that our softer cannula (far more flexible than Teflon) reduced the wound response significantly vs. a Teflon cannula. This histology data has been submitted for poster presentation at an upcoming professional meeting.

Q: How about the user experience around the set?

A: The rest of our design – packaging, insertion, connecting and detaching – would not look out of place next to other recent excellent designs like Abbott’s FreeStyle Libre sensor, Dexcom’s G6 inserter, and/or the MiniMed/Unomedical Mio Advance. Fewer parts = reduced steps = less to do, less to learn, and less to go wrong. There are even a few small features that might bring a smile to your face.

Q: Do you intend to sell your infusion sets directly, or go through pump companies?

A: We intend to distribute infusion sets with “SteadiFlowtm technology” (our brand) through existing pump companies. We would work with the pump companies to make sets with appropriate pump connections and then pack them up with pump company specific branding and ship them by the pallet to the pump companies for their distribution. We believe our set should be able to use the same reimbursement code and have similar pricing as the current soft cannula sets so as to not disturb the existing infusion pump company business model. We have had positive discussions to lay the groundwork with most players. Our goal is to ensure access to our sets for anyone who wants them, so we believe we eventually will need an agreement with all the players. I believe we can get there if our set works as well as I believe it does.

We have been approached by a number of patch pump developers about integrating our cannula design into their patches. That is a more complicated process and we are very early, but the holy grail of a longer-lasting patch pump with an integrated glucose sensor might soon be within the realm of technological feasibility.

Q: How big of jump do you see SteadiFlowtm technology being in the grand scheme of infusion sets?

A: I am old enough to remember when the differentiation between infusion sets was enough to move the pump market (the first soft cannula set did this, and the first set with a quick disconnect did it again). I am not so bold as to predict a third time, but the data out there suggests current sets are not getting the job done for a lot of people and a quick dive into the FDA’s MAUDE database suggests that infusion sets are a big call generator for the pump companies. A more reliable infusion set could make people happy and cut internal support costs at the same time. That seems like a real win.

Q: What is coming in the pipeline, e.g. extended wear sets?

A: We’ve researched heating, vibrating, and atraumatic insertion and have a few other ideas for the pipeline. But our biggest learning was that these such complicated designs are not needed for a first-gen product to solve real-world problems. The biggest performance difference between our infusion set and others came from the flexible, kink-proof cannula, and when we found that, we focused our efforts on developing a first-gen set for initial commercial launch.

As far as extended wear goes, we see that as a second-gen product release. Our goal is to extend wear to seven days and we’ve gathered data in swine out to fourteen days. Practically, anything beyond three days would be a significant game changer for traditional infusion sets and patch pumps alike. Given the challenge of reliably overcoming the body’s wound response this will not be an easy task. I have not seen anything else that looks like it can get there. We’re going to learn a lot next year with our recently awarded NIH SBIR Phase II study of how insulin gets absorbed day-by-day from our SteadiSet infusion set versus a Teflon control set. This clinical study at Thomas Jefferson University will use the gold standard hyperinsulinemia / euglycemic clamp PK-PD study design.

We hope that the combination of increased surface area and reduced tissue response will allow reliable absorption out beyond three days. Assuming modern tape can do for sets what it has done for glucose sensors and our wire coil reinforcement can eliminate kinking in humans as well as it did in pigs, then we have a good shot at extending duration of use. If that works out, then sensor-set products start to make more sense as they require a very small sensor/transmitter and a very good infusion set with high reliability.