Medtronic reported its 2Q20 (F1Q21) financial results this morning on a call led by CEO Geoff Martha and CFO Karen Parkhill. Diabetes Group head Sean Salmon was also on the call during Q&A. Diabetes is on slide #11 here and read on below! 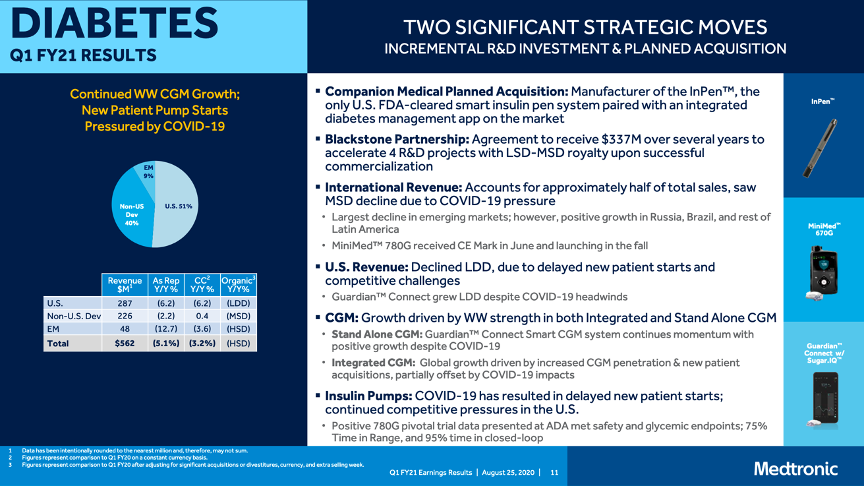 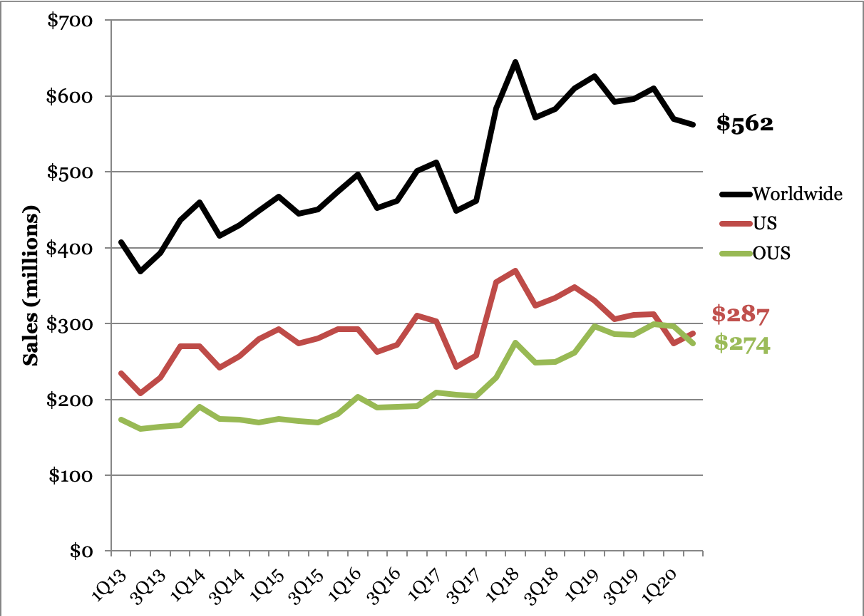 Medtronic reported 2Q20 (F1Q21) total Diabetes revenue of $562 million, declining 5% YOY (-3% operationally). At $562 million, 2Q20’s Diabetes revenue was its lowest in three years (since 3Q17). However, compared to Medtronic’s overall 17% YOY decline across all Groups in the quarter, Diabetes fared relatively well. Medtronic’s other Groups, Cardiovascular, Minimally Invasive Therapies, and Restorative Therapies saw YOY declines of 13%, 14%, and 15% respectively. As expected with the impact of COVID-19, Medtronic noted “delayed new patient starts” for its insulin pumps, though the impact wasn’t quantified. For some context, Insulet saw new patient starts down ~50% in the quarter, while Tandem appeared to see slightly less impact in the quarter. Medtronic released data last month on its experiences with virtual pump training, though it seems the pandemic is still impacting patients’ and providers’ willingness to initiate pump therapy. By our estimate, pump sales made up ~$332 million of Medtronic’s 2Q20 diabetes revenue while CGM sales provided the other $230 million.

2. Medtronic management still not giving US or OUS guidance though general commentary instructive; overall 3Q20 revenue expected to decline 9% YOY due to lingering effects of COVID-19

Due to lingering uncertainty around COVID-19, Medtronic continued its suspension of guidance, instead providing more general commentary on the business. CFO Karen Parkhill acknowledged that while there is “still uncertainty regarding the recovery,” Medtronic currently expects growth rates to continue their upward trajectory, from a base that has clearly declined. For the overall company, 3Q20 revenue is expected to decline approximately 9% YOY, compared to the 17% YOY decline this quarter and 25% YOY decline in 1Q20. Despite declining growth in the quarter, Ms. Parkhill also commented that “May was better than April, and June was better than May” and that these improving trends “continued into July and August.” Looking further ahead, Ms, Parkhill said Medtronic expects to see continued sequential improvement through 4Q20 and early 2021 returning to “normal growth” in the first half of 2021.

3. Investor and Analyst Day rescheduled for October 14th; “structural” and “cultural” changes to Medtronic coming, but committed to Diabetes (“not a three-to-five years turnaround [story], it’s going to be faster than that …” )

Notably, originally scheduled for June, Medtronic announced it will host its Institutional Investor and Analyst Day on October 14 this year. According to Mr. Martha, Medtronic will use the Investor Day as an “opportunity to lay out where we’re headed, including a deeper dive in our pipeline now that it’s coming to fruition as well as the actions we’re taking to simplify the company.” That is an interesting strategic shift for Medtronic to be taking.  On the second point regarding changes to the company, Mr. Martha noted that though he didn’t want to “go to deep” on them today, but broadly speaking, these changes will center around “structural changes that empower [Medtronic’s] businesses to make decisions.” The changes are aimed to enable the company to be “nimbler and faster” recognizing Medtronic’s often “smaller-focused” competitors. And, Mr. Martha also emphasized that Medtronic is capitalizing in the areas where its larger scale is beneficial such as “technology platforms” and encouraged listeners curious about these updates to attend the company’s Investor Day in October.

1. MiniMed 780G “launching in the fall” in Europe; MiniMed 770G slated for US approval “later this summer”; no updates on MiniMed 780G in US

MiniMed 780G is slated to launch “in the fall” in Europe, in line with the plans shared after the device was CE-Marked in June. A fall launch would be a nice win for Medtronic: getting the second-generation hybrid closed loop system in European markets before Tandem’s Control-IQ and Insulet’s Omnipod Dash would certainly strengthen Medtronic’s OUS position. According to Tandem’s 2Q20 call, Control-IQ is now available internationally in the UK and South Africa, with broader rollout through the rest of the calendar year. Insulet’s Omnipod Dash has launched in the UK, Netherlands, and Italy, but broader rollout has been pushed back to 2021. Though Medtronic didn’t share a user base update for MiniMed 670G, the first-generation system’s growth has flattened due both to COVID-19 as well as the Tandem’s highly competitive Control IQ, which was approved by the FDA last December and covered by NEJM last October (virtually unprecedented for diabetes technology, particularly the inclusion of an editorial in the hallowed journal) – see more details in our Tandem 2Q20 quarterly report. Launching the upgraded 780G system should help boost Medtronic’s international pump sales and we’ll certainly be looking for dQ&A to update the field on patient preferences in and around Europe – contact dQ&A CEO Richard Wood if you aren’t receiving their reports. 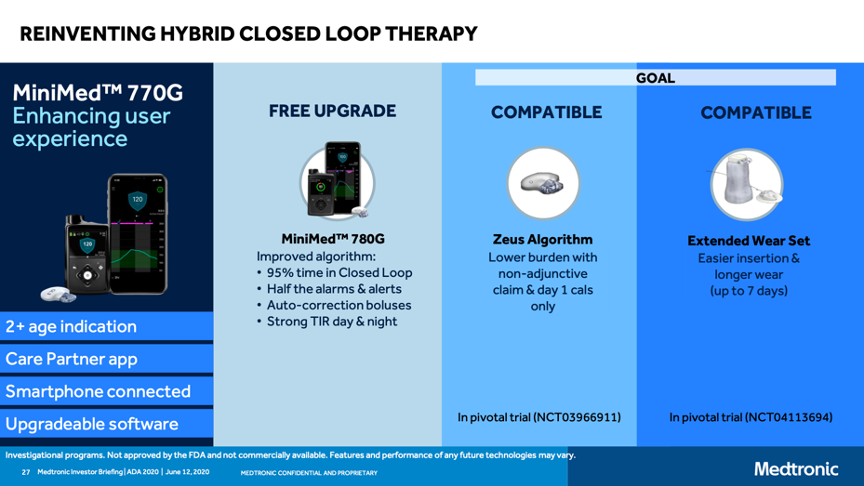 2. US pivotal for Synergy CGM “now under way” with enrollment “going well”; no updates on Zeus iCGM or non-adjunctive Guardian Sensor 3

Once again, Medtronic focused in on CGM during the call, with Mr. Martha calling CGM “the weak spot” for Medtronic’s Diabetes business and recognizing that the company has “got to catch up on the sensor side.” Encouragingly, during prepared remarks, Mr. Martha shared that the US pivotal for Synergy CGM is “now under way.” Enrollment is “going well” and Medtronic has received “great feedback” on the product thus far. As a reminder, the Synergy device has a new fully-disposable form factor, seven-day wear, and day 1 calibration only. The ongoing US pivotal for Synergy CGM is clearly the bright spot for Medtronic’s CGM pipeline, and neither the Zeus iCGM nor the non-adjunctive Guardian Sensor 3 were mentioned.

Medtronic’s recent Companion Medical acquisition was clearly a highlight for the Diabetes Group in 2Q20 – announced just two weeks ago (exactly), in what is clearly an extremely exciting strategic purchase. The acquisition was the first bullet of the company’s diabetes slide of its 2Q20 earning presentation, which noted that the InPen is the only FDA-cleared smart insulin pen that is paired with an integrated diabetes management app. During his prepared remarks, Mr. Martha shared his enthusiasm for the acquisition’s potential and Medtronic’s plans to build a system combining in-pen with smart CGM tech and Nutrino and Klue AI algorithms: “Companion's smart pen technology expands our ecosystem to include the multi-daily injection portion of the diabetes market with a patient population that is nearly 12 times larger than that that use insulin pumps.”

Outside of Companion, Synergy CGM, and MiniMed 780G and 770G, there were no updates on the rest of Medtronic’s Diabetes pipeline.

Q (Robbie Marcus, JP Morgan): You're clearly leaning in on R&D. I was wondering where are these dollars going? What are the projects that you're seeing and your investing in? And then maybe along those lines, you're also clearly investing heavily in Diabetes. There was speculation a while ago maybe you'd exit that business. It looks to me less likely given how much you're putting into resources here. What's the latest thoughts? You have new management, lots of investment there. How should we be thinking about this business? And is this a three-to-five-year turnaround story or is it something we could see in the shorter term?

Geoff Martha, CEO: In terms of the R&D increases, yeah, we want to put more into R&D both and be creative, and when I look at R&D, we're looking at traditional R&D off our income statement, these creative third-party partnerships like Blackstone, which have a very good return on them are also something we want to use and our inorganic, because most of what we're buying is technology oriented tuck-ins which are all somewhere on their path to commercialization or just been commercialized, so all this gets back to investing in areas in our business.

We just have a lot of great ideas. The old idea that our eyes are bigger than our stomach, we want to get more R&D capability here. We've got just to list some of the products. We're talking about our pipeline today that's coming out, right? But the R&D and there's some R&D that needs to go into sustaining that and iterating that things like Spinal robotics and things like that. And we're not done. We're just getting started so there's a lot more to go into there, but some of the things that are on the pipeline like RDN, that's a multibillion opportunity there, the EV ICD, I'll start with cardiac here, PulseSelect pulsed-field ablation, just those three are I'd call more medium- term for us and are very exciting and I think could use more investment to speed up and drive bigger impact.

And in RTG, there's always more to invest in neurovascular, Brett Wall and Stacey Pugh makes sure of that. There's lots of products there and it's a high-growth area. Like I mentioned DBS, we have a directional lead system coming out. We want to invest in closed-loop. I'd just – look, neuromodulation is a big growth opportunity for the industry, for the company and I think it's going to have a huge impact on patients.

And then MITG, obviously the soft tissue robot in what we talked about the timeline there, but we still have to commercialize that. That's going to take some investment. It may not show up in the R&D line, but we need to invest there and we mentioned in the commentary some of the products starting to come out from our Digital Surgery acquisition, this Touch Surgery enterprise. We're very excited about that as we move. We believe we're leading in robotics, soft tissue robotics, the AI side of it and so there's a lot of opportunity there.

And then of course Diabetes. We've got to catch up on the sensor side and I don't think everybody picked up, but we're really excited about the sensor pipeline here. I wish it were happening even faster, but it is accelerated from what we – we're well into the Synergy trial enrollment rather and getting great feedback on that, so there's lots of opportunities for R&D investment and that's probably, I don't know, 70%/80% of what we're talking about internally is this pipeline and how do we feed it, how do we speed it up. So very excited about that.

Q (Raj Denhoy, Jeffries): Wonder if I can ask about Companion Medical. You talked about the potential for that product in the Diabetes market, but maybe you could share a little bit about your internal projections for revenue growth for that and when it could start to be a meaningful contributor to your growth?

Sean Salmon, Diabetes Group President: Yeah, so as Geoff said, the deal's not yet finalized, but the opportunity is very attractive. You'd heard Geoff's commentary recently. There's about 12 times the number of patients. It's – we think by our modeling, it's about 13.5 million patients worldwide who are using multiple daily injections to treat their Diabetes and it's a very, very under-penetrated opportunity so for us to go into that market, and add value to those who either choose to be there or have to be there because of other consideration, is where we want to meet those patients.

And this really dovetails very nicely into our improving sensor pipeline and adding the capabilities that we've added at the company over time, those building blocks for the powerful AI and data science capabilities which we think when deployed against knowing how much insulin you're getting at what time, you can markedly improve the outcomes for patients who choose to use multiple daily injections. So those are a few things, right? We can capture more of the patients who are upstream and maybe move patients who get comfortable with technology into some other solutions that we have in our automated insulin delivery systems.