Medtronic reported 2Q16 (F1Q17) financial results today in a call led by CEO Omar Ishrak, including an accompanying slide deck (Diabetes is slide 12, pasted below). We include the top highlights below, followed by a significantly updated pipeline summary (post-Analyst Meeting). Remarks on the 670G from Q&A are also enclosed.

2. US Diabetes sales totaled $263 million, declining 4% YOY and down 10% sequentially. Growth was in the “low single digits” excluding the extra selling week in 2Q15. Management said the US market “remains competitive,” and indeed, this marked the first quarter of negative US growth since 2013 (prior to the 530G launching). The just-approved MiniMed 630G is expected to reinvigorate the US business (launching in September).

3. International sales of $189 million grew 11% as reported, including a strong 11% operationally in developed markets ($155 million) and 16% operationally in emerging markets ($34 million). Sales declined 7% sequentially from blowout record sales in 1Q16. The MiniMed 640G/Enhanced Enlite again saw “strong sales” in Europe and Asia Pacific. This marked the second straight quarter where the international business supplied 100% of the business’ growth.

4. Management shared excitement for the MiniMed 630G (threshold suspend on the new pump platform), which received FDA approval two weeks ago and will ship in September. The 630G brings customers features they’ve asked for ahead of the 670G (waterproof, color screen, remote meter bolus), and refreshes the three-year-old product line in the US. Said management in Q&A, “We didn't launch the 630 because we thought there was a risk to the 670 timeline.” Still, we do not expect many upgrades to this pump ($599 or $3,100 out-of-pocket), and assume many will choose to wait for the 670G to launch. See our detailed coverage or below for more on the 630G.

5. The MiniMed 670G/Enlite 3 was submitted to the FDA in June, and timing is “on track” with previous expectations (April 2017). The FDA is “actively engaged” and management characterized the relationship as “outstanding.” We assume the 630G approval bodes well for a rapid review (same pump platform). A 670G pediatric pivotal trial (7-13 years old) has started.

6. The Guardian Connect standalone Bluetooth-enabled mobile CGM received a CE Mark in July, but launch outside the US has been pushed back a quarter to ~November 2016-January 2017 (F3Q17). This will launch OUS with the current Enhanced Enlite (“Enlite 2”). This product is a key competitive answer to Dexcom’s G5 and Abbott’s LibreLink, plus an important Medtronic move to bring CGM into MDIs.

8.The first-gen app with IBM Watson, Sugar.IQ (renamed from "SugarWise"), will now launch in the “next few months,” behind the Analyst Meeting expectation for a “summer 2016” launch. The initial app will analyze retrospective data, and a future gen will add the forward-looking hypo prediction.

9. An Android version of MiniMed Connect is still expected to launch in the US this fall (August-October 2016, F2Q17), on par with the most recent expectation. As a reminder, the 630G and 670G are not compatible with MiniMed Connect.

10. The tables below include more detailed pipeline summaries for Medtronic’s planned pumps, CGM sensors, and data analytics over the next four years – incorporating today’s call and the June Analyst Meeting. 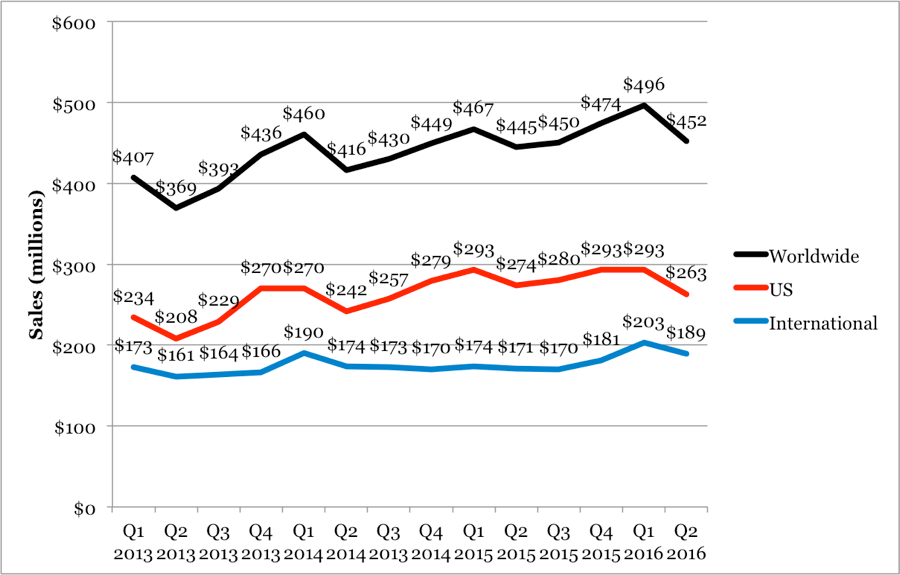 * YOY operational growth was in “high-single digits” in both F1Q16 and F1Q17, excluding the extra selling week in F1Q16.

**Operational growth is listed for developed markets, which represents ~80% of the business

Hooman Hakami: With respect to the 670, the PMA is with the FDA. It's really hard to predict when they're going to approve it. Obviously it's in their hands now. We're working actively with them to answer the questions that they have regarding our submission, but in the meantime, we launched the 630G. We're excited about this. It is going to address some of the biggest request we've seen from patients, the color screen, waterproof, remote bolus capability, and so it's a chance for us to really bring additional enhancements to our patients while the 670 process goes on. So we're excited about the new product that we have, and in the meantime, we are working actively with the FDA on the 670.

Q: I just wanted to make sure there's no change in timelines on the 670G from your perspective?

Omar Ishrak: The 670G is on track. Hooman, do you want to say a couple of words on that?

Hooman Hakami: There is absolutely no change or any indication that things are going to push out on the 670G. Just an additional point of clarification, we didn't launch the 630 because we thought there was a risk to the 670 timeline. With the 670, as I said, we're working very, very closely with the FDA. The relationship is outstanding and we're actively engaged with them. We launched the 630, not due to anything related to the 670, but because of two things:

One, it gives our patients the request that they've asked for, and I touched on what some of those were, from waterproof to color screen. At the same time, what it does is it refreshes our product line in the US. The 530G was launched in September of 2013. That's three years ago. And we've held our own with this product even as its long anniversaried, but if you take a look at how well the 640 has done outside the United States, we felt that by bringing these patient-centric features and a new hardware platform into the US now, we could really refresh our product line and really drive growth in the U.S. while we wait for the 670. 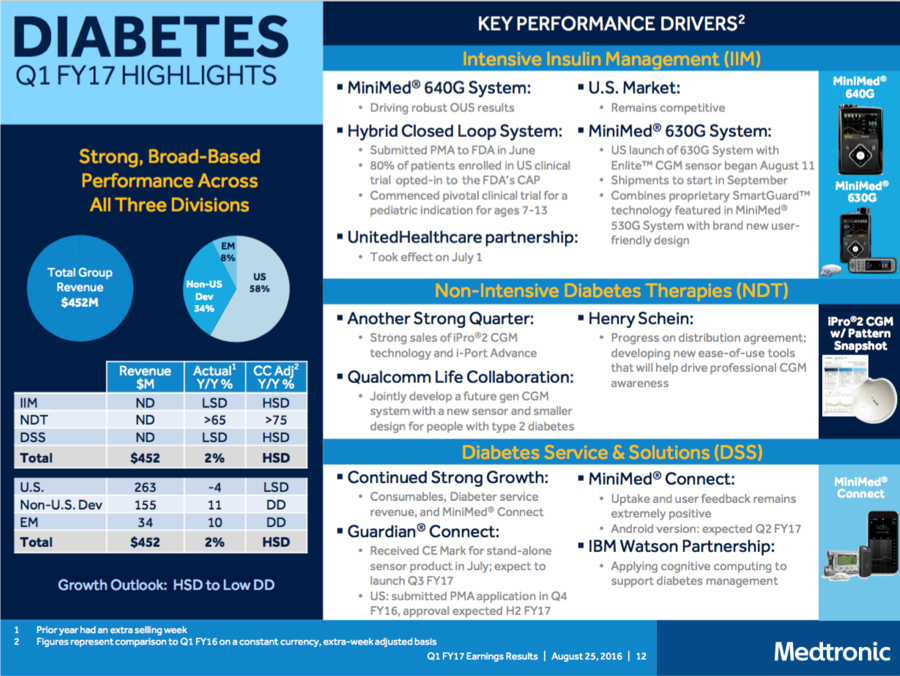 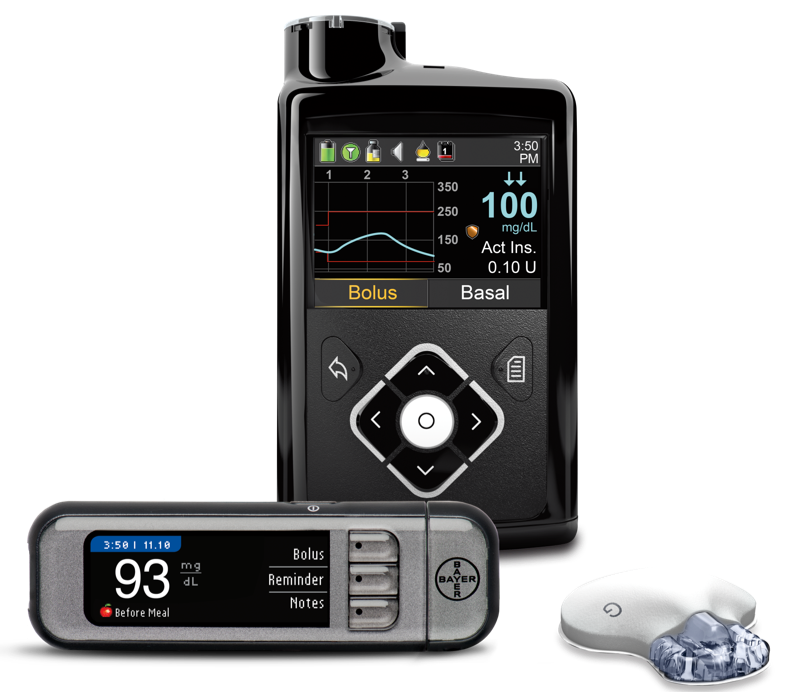