Tandem reported 3Q20 financial results this afternoon in a call led by CEO John Sheridan and CFO Leigh Vosseller. Check out our top highlights below. 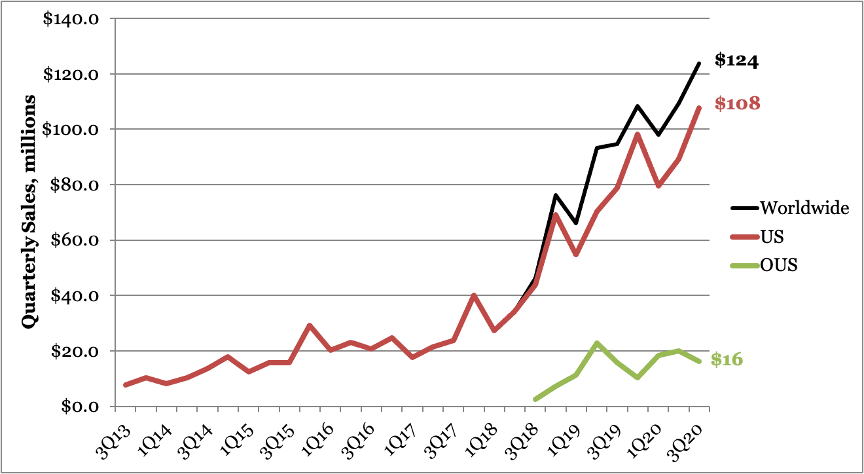 Tandem reported record quarterly revenue of $124 million in 3Q20, rising 13% sequentially and 31% YOY on a very tough comparison to 105% YOY growth in 3Q19. The $124 million in 3Q20 revenue easily surpassed the previous record quarterly revenue of $109 million in 2Q20. Immediately during his prepared remarks, CEO John Sheridan attributed the record global revenue to the domestic strength of t:slim X2 and Control-IQ, as well as wins like the announcement of UnitedHealthcare coverage for Control-IQ in June that took effect on July 1, the NEJM publication on Control-IQ in August, the US launch of the t:connect mobile app this summer, and the international launches of Control-IQ in the UK and South Africa. 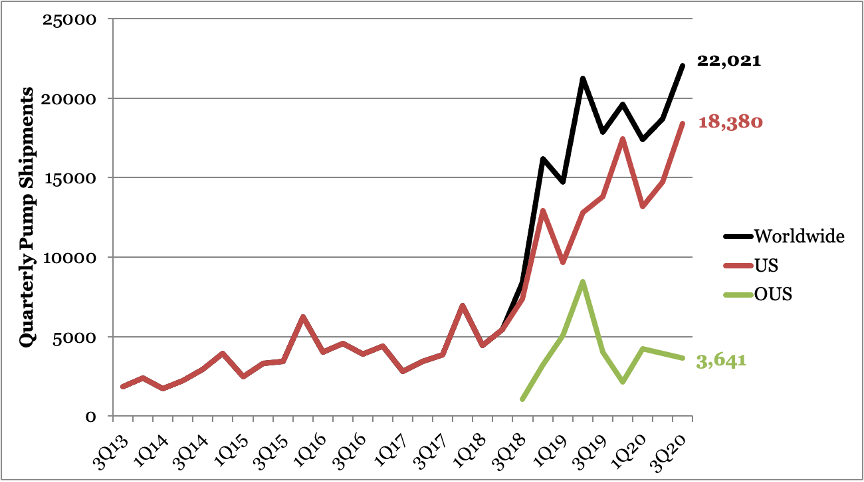 Tandem shipped a record total of 22,021 pumps worldwide this quarter, rising 23% YOY and 18% sequentially. Notably, this tops the previous record of 21,258 pump shipments in 2Q19 when Tandem experienced “onetime dynamics” from pent-up OUS demand. The record quarter was driven entirely by the US market, which saw a record 18,380 pumps shipped, up 33% YOY and 25% sequentially. Internationally, 3,641 pumps were shipped, down 10% YOY and 8% sequentially.

Tandem reported a gross margin of 53% in 3Q20, about even with gross margin of 54% in 3Q19. Sequentially, gross margin was improved from 50% in 2Q20. Gross margin in 3Q20 was impacted “just over 1%” by royalties associated with Control-IQ (due to Dexcom’s ownership of TypeZero), a slight reduction from 2Q20 when gross margin was impacted 2% in 2Q20. This royalty impact is expected to continue to decline as a percentage of sales over time. Additionally, in 2Q20, we heard about impact on manufacturing capacity from COVID-19 (due to additional precautionary measures and more complicated supply chain management) creating so headwinds around gross margin – we didn’t hear any commentary about this today. For 2020, Tandem is guiding for “low-to-mid” 50s% gross margins, but  Ms. Vosseller maintained confidence that gross margins would reach 60+% long-term.

In the biggest pipeline update from the day, Tandem shared that it has “recently” filed the 510(k) for smartphone pump control to the FDA. This comes on the early side of previous expectations to file for smartphone bolusing in 4Q20. Smartphone bolus control was also expected to be cleared in 1Q21, though Mr. Sheridan hedged on that timeline today given resources at the FDA being shifted towards COVID-19. Being able to dose insulin from a personal smartphone (or even smartwatch) is a highly requested feature and if all goes as planned, Tandem could be the first pump company with the capability. Insulet’s Omnipod 5 used smartphone control in its pivotal trial (completed as of EASD 2020) and that system is expected to launch in 1H21.

2. International Control-IQ availability: currently available in UK and South Africa; expected to launch in “half” of OUS markets by “year’s end”

As we reported in 2Q20, Control-IQ is now available internationally in the UK and South Africa. Building on these ahead of schedule launches, Mr. Sheridan announced today that “by year’s end, we anticipate Control-IQ will be available in more than half the countries outside the United States and look forward to broad availability.” Currently t:slim X2 pump software is available in 12 languages and it is our understanding that Tandem plans to eventually launch Control-IQ in all geographies where t:slim X2 is currently available. It is notable that international launches of Control-IQ have not been slowed by COVID-19 as we are repeatedly hearing international markets have been slower to recover due to care delivery patterns. In 2Q20, Ms. Vosseller shared that Tandem had received reimbursement approval in Germany and would begin marketing Control-IQ there in 2H20, though this went unmentioned on today’s call. Growing Control-IQ in Europe should help drive Tandem’s international sales and serve as a very compelling AID competitor to Medtronic’s MiniMed 780G. Additionally, as noted by Mr. Sheridan in today’s call, international pump adoption is generally lower than in the US at “10% to 20%” (of type 1s) meaning there is a large market opportunity for Tandem, especially with Control-IQ, to bring more people onto pump and AID technology.

During today’s call, Mr. Sheridan reiterated plans to launch various Control-IQ algorithm enhancements in “2021.” As of 2Q20, algorithm updates were slated to be available in “the second half of 2021”; today’s phrasing used a slightly more general “2021.” Though Mr. Sheridan did decline to give specifics on algorithm updates for “competitive reasons,” he once again shared that the enhancements would be “centered around algorithm refinements that are intended to even further improve clinical outcomes, new features for greater personalization, and improvements to the overall system usability.” As we noted in 2Q20, these timelines mark a shift from comments made in February in which Tandem said it planned to bring a fully closed loop system capable of “complete bolus and basal insulin automation” with its next AID update in “2021.” As we wrote back in February, this timeline seemed aggressive, but we still imagine Tandem has fully closed loop ambitions. Regardless of timing, we expect patients and providers will welcome software updates especially given how easy it is to update t:slim X2 pumps.

4. Abbott partnership “going quite well”; no timing provided for integration

Tandem’s partnership with Abbott (finalized in June) to integrate Abbott’s FreeStyle Libre CGM with t:slim X2 pumps is “going quite well” according to comments made by Mr. Sheridan, during Q&A. Mr. Sheridan stated that the two companies were in still in the early “planning” and “early design” phases, slightly progressed from 2Q20 commentary that the two companies were still in the early stages “preparing and getting together to put together the details of a development plan and a pipeline plan.” On that update, concern was raised about whether or not this limitation would affect the Tandem-Abbott partnership and Mr. Sheridan assured analysts it would not. Mr. Sheridan added that Tandem and Abbott have not decided which specific models of their pumps and CGMs they plan to integrate, but the warning/limitation for FreeStyle Libre 2 has nothing to do with the integration of “our pump with their sensor” from a technical perspective.

1. t:sport FDA submission expected in “first half of 2021” with mobile app control

Tandem intends to launch its t:sport insulin pump in the “second half of 2021,” mostly in line with 2Q20 expectations for clearance by “summer of 2021.” In a deviation from prior plans, Mr. Sheridan shared that Tandem is reversing its two-part regulatory strategy and will be submitting a 510(k) filing to the FDA for “mobile app control” of t:sport ahead of a “separate filing” with a dedicated controller. Previously, Tandem had planned to submit t:sport with a dedicated controller, first, in 4Q20, followed by t:sport with smartphone control in 2021. Based on today’s commentary, it appears the timing for submission of t:sport with mobile app control is still on track for the “first half of 2021,” though that would obviously put the dedicated controller filing behind previous plans for 4Q20. In the past, Tandem had also outlined plans to “almost have a soft launch” for t:sport after initial clearance of the pump with a dedicated controller, collecting real-world data “with small numbers”; given smartphone control will be filed first, those are, presumably, no longer the plans. 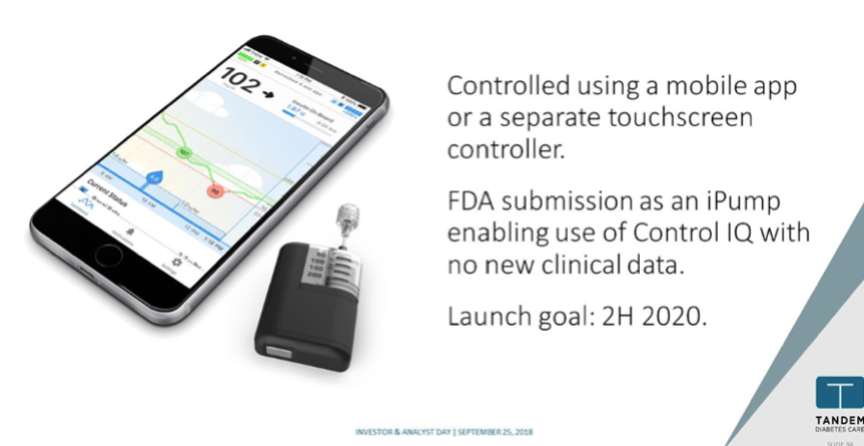