In long-anticipated and major news for the type 2 diabetes community, Novo Nordisk just announced that FDA has approved its once-daily oral GLP-1 agonist under brand name Rybelsus for the treatment of type 2 diabetes. See below for information on class and commercial implications, pricing, upcoming studies for CV and renal indications, results from the phase 3 PIONEER program, our past coverage of oral semaglutide, dQ&A market research on oral vs. injectable medications, what to expect with future oral GLP-1s, and our biggest questions moving forward.

Many anticipate oral semaglutide will compete with other oral agents more so than injectable GLP-1 agonists. We anticipate that the oral administration will likely swing some individuals hesitant to use an injectable therapy toward the GLP-1 class – especially those interested in the compound’s potent weight loss and cardioprotective benefits. We’ve heard that cardiologists also shy away from injectable diabetes medications (they’re unfamiliar and seemingly more complicated to prescribe), which is one reason why SGLT-2s have thus far been more popular within that community of HCPs. With oral semaglutide on the market, cardiologists will hopefully begin considering GLP-1s for their patients with atherosclerotic CV disease as well. We remain enthusiastic about the potential for this therapy to bring more patients to the GLP-1 class who may otherwise be tentative about using an injectable therapy. We are also interested to better understand the degree to which more or fewer PCPs prescribe this medicine; given that a majority of type 2 diabetes is treated in primary care and not by a specialist, PCP uptake will be an essential factor in how patients experience this new drug. We also believe the therapy approval will bring more attention to the company’s once-weekly semaglutide offering, Ozempic.

Both Images Below from Novo Nordisk’s 2017 Capital Markets Day Presentation: 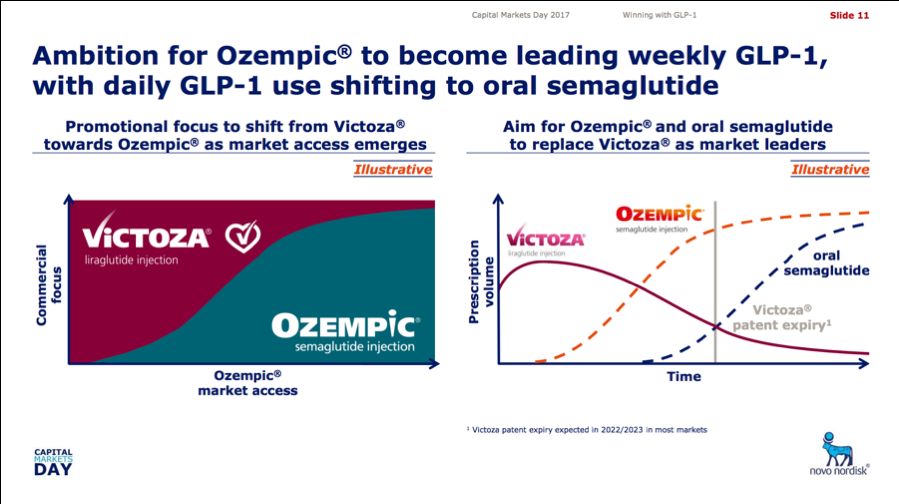 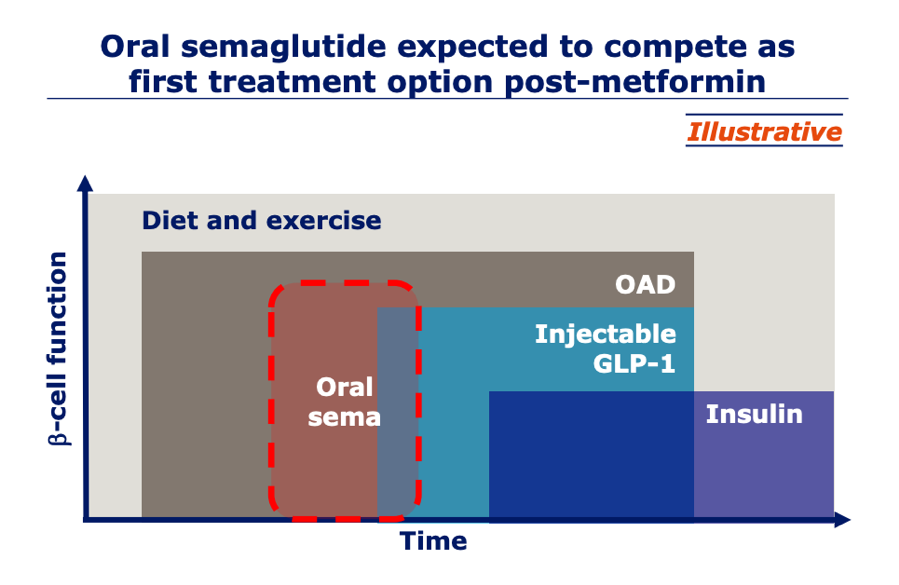 It remains unclear where Rybelsus will be priced and what access will look like on various formularies, given ongoing discussions with payers. We’re glad to see that there will be an affordable savings card program simultaneously available with Rybelsus’ launch, though this has become more or less the expectation for diabetes manufacturers launching a new pharmaceutical product. List price will be key in regard to oral semaglutide’s broader reach (that said – some patients do pay list price for insulin because they will die without it – we see very few people doing that with oral semaglutide in the US,  just as that is virtually never seen with Ozempic). Ultimately, will Rybelsus be priced more as an oral therapy akin to DPP-4s and SGLT-2s, or closer to higher-priced injectable GLP-1s such as Ozempic and Trulicity? In order for Rybelsus to truly compete with existing oral therapies, we suspect price will have to be on the lower end of this spectrum, but oral semaglutide’s limited bioavailability as well as the costs of various ingredients (one in particular) may lead Novo Nordisk to set a higher-than-expected list price. To be sure, discussions around pricing for the therapy have been robust over the past few years, and this will remain one of the key points as Rybelsus’ launch later this year comes closer. One bright spot is that major US payers have thus far not created exclusive formularies for GLP-1 therapies, meaning several products within the class are covered for beneficiaries and manufacturers aren’t forced to pay rebates as large as those paid for insulin, as we understand it.

As far as success for Novo Nordisk is concerned, a critical area of work was optimizing cost of goods sold, as pricing oral semaglutide on par with injectable GLP-1 agonists will make it hard for oral semaglutide to compete with the value proposition of oral SGLT-2 inhibitors. We look back to AADE and one of the speakers there who implored diabetes specialists to “get GLP-1 to everyone who needs it!” – hopefully oral GLP-1 will be seen as an opportunity for those millions who have not yet taken it.

Even with approval, oral semaglutide’s clinical story has just begun, in terms of all the patients and broader ecosystem players it could help. Novo Nordisk is currently investigating oral semaglutide (or injectable semaglutide) in several trials that might impact oral semaglutide’s future label. A decision on a potential CV indication (for reducing risk of three-point MACE in people with type 2 diabetes and established CVD) for Rybelsus is expected in January 2020, based off of pooled data from SUSTAIN 6 and PIONEER 6. As a reminder, SUSTAIN 6 for Ozempic enrolled 83% with existing CVD and the 26% risk reduction on MACE was driven by stroke and MI; PIONEER 6 for oral semaglutide enrolled 85% with existing CVD and the 21% MACE benefit was driven by CV death and stroke. In terms of upcoming trials:

The ten-study phase 3 PIONEER program (n=9,543) started reading out in February 2018 and completed with PIONEER 6 in November 2018. See a full table of these studies and their results below. By and large, PIONEER has supported efficacy and tolerability of oral semaglutide; the combination of glucose-lowering and weight loss efficacy with a remarkable safety profile (especially on hypoglycemia) is unparalleled among oral agents, and even offers improvements over some existing injectable GLP-1 agonists. Excitement in the field for the first-ever oral GLP-1 agonist is undeniably high, and opportunities for earlier treatment intensification with GLP-1 agonist through oral dosing are tremendously important.

Many in the larger diabetes community have been highly anticipating oral semaglutide’s approval for quite some time. A quick search of our Close Concerns Knowledgebase (or as we call it, “CCKB”) shows that “oral semaglutide” has been mentioned in nearly 200 separate articles over seven years! One of our first mentions of oral semaglutide comes from Novo Nordisk’s Capital Markets Day 2013, where CSO Dr. Mads Thomsen spoke highly of “OG217SC” and its impressive phase 1 results. For an even deeper historical dive, see Kelly’s interview in 2009 with CEO Lars Sørenson: “We think we can develop [an oral GLP-1]. That would be exciting for the early type 2 individuals where we are up against other oral medications. We are hopeful that there still may be potential for individuals with pre-diabetes and a high number of other risks (renal, CV) – we’ll be interested to see this what may happen on this front.

Broadly speaking, it appears that the next push in the oral GLP-1 field will be a shift to small molecule candidates (instead of larger peptide drugs), which might allow for cheaper manufacturing costs, better bioavailability, enhanced patient experience by eliminating fasting requirements, and ultimately lower costs for patients. We’re thrilled to see so much investment in this therapy class, which signifies both the high demand for what these therapies could offer for patients and the large potential ROI for sponsors that can successfully develop them. More speculatively, we’re interested in what the potential could be for combo pills of small molecule oral GLP-1s and SGLT-2 inhibitors. Lilly and AZ are both well-positioned to investigate this, as they have a GLP-1 and SGLT-2 in their portfolio. Moreover, both companies have sponsored studies showing superior benefits with GLP-1 + SGLT-2 coadministration vs. either monotherapy alone (DURATION-8 and AWARD 10).