Tandem reported blowout 4Q18 financial results this afternoon in an energizing call led by outgoing CEO Kim Blickenstaff, COO John Sheridan (who will become CEO on Friday), and CFO Leigh Vosseller. See below for our top financial and pipeline highlights. 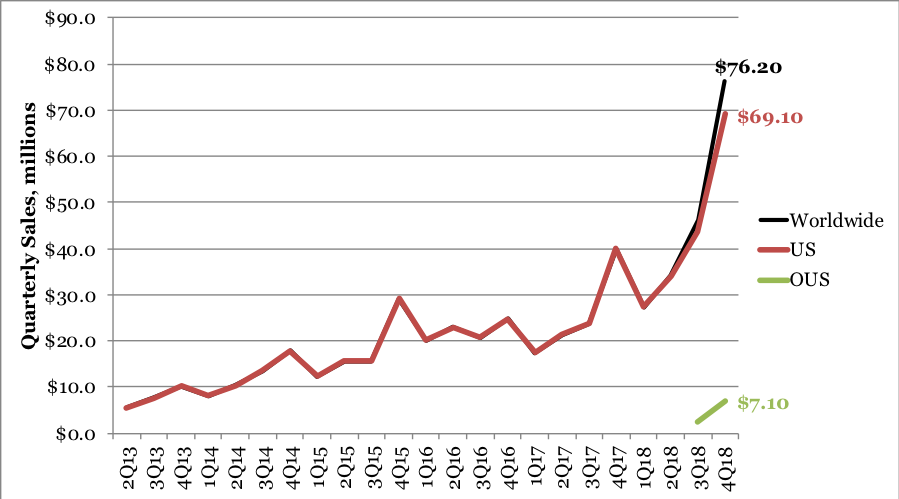 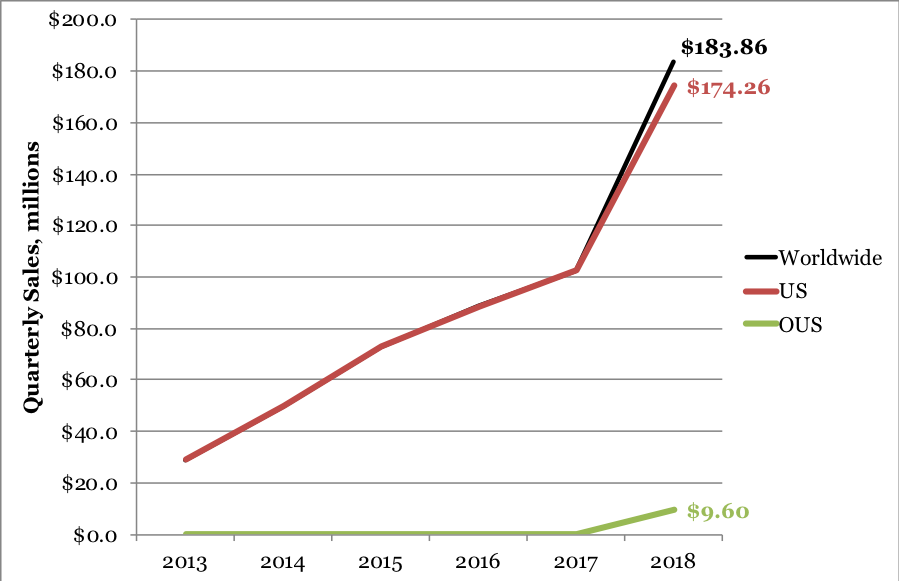 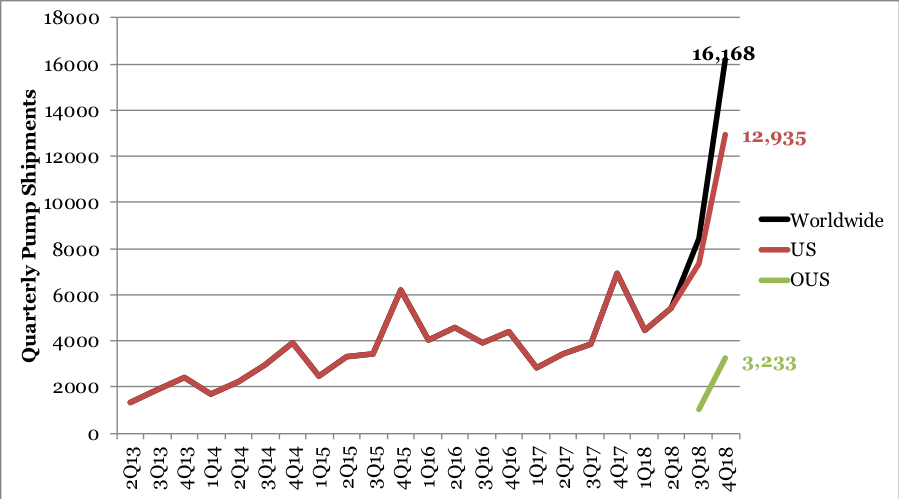 Tandem shipped a record 16,168 pumps globally in 4Q18, with 12,935 pumps shipped in the US and an impressive 3,233 pumps shipped OUS in the second quarter after the 3Q18 international launch. Total pump shipments more than doubled YOY (133%) from 6,950 pumps in 4Q17, reflecting the largest YOY increase in Tandem’s pump shipments to date. To put the quarter’s 16,168 pumps in perspective, we’d note that Tandem shipped 17,061 pumps for all of 2017! Sequentially, 4Q18 pump shipments increased 92% (also the largest to date) from the previous record of 8,434 in 3Q18. US shipments climbed 75% sequentially and international shipments more than tripled (+206%) sequentially, demonstrating substantial pent-up-demand abroad. According to Ms. Vosseller, 80,000 pumps have shipped in the US over the last four years, representing a “reasonable estimate” of Tandem’s in-warranty installed base. That said, Tandem is still renewing pumps from 5+ years ago, so the installed base is actually much higher – probably closer to 90,000 or even 100,000.

Tandem reported the most profitable quarter in its history, including a gross margin of 55% and $15 million of cash flowing in – both came one year earlier than the previous goal for “4Q19.” Wow! It is also notable that Insulet reported its most profitable quarter ever yesterday. Is the pump industry reaching an inflection point for scale and profitability? Surely Insulet and Tandem are showing the insulin pump business can be profitable, provided the right volumes are reached…

Tandem guided for 2019 sales between $255-$270 million, reflecting annual sales growth of 39%-47% as compared to 2018’s blowout 71% growth. This guidance includes international revenue of $45-$50 million – given $9.6 million in 2H18 international sales, this OUS guidance indicates substantial confidence from Tandem management in OUS pent-up-demand. During Q&A, Ms. Vosseller attributed “a big portion” of 2019 international guidance to the Animas opportunity. Whereas Tandem is “considering” launching in other countries in 2H19, Ms. Vosseller expects to see “the majority of growth” in Tandem’s already established EU geographies thanks to Animas conversions.

Today’s call opened with an unexpected announcement regarding a major leadership change: Mr. Blickenstaff, who has served as Tandem’s President and CEO for over 12 years, will assume the newly created position of Executive Chairman, while Mr. Sheridan, who has been Tandem’s EVP and COO for five years, will take over as President and CEO. The change is effective this Friday, March 1. This was abruptly announced today and took us by surprise, though Mr. Blickenstaff said Mr. Sheridan was hired with this change in mind five years ago. That was news to us, as this succession plan was mentioned for the first time today and takes effect on Friday. Analysts on the call greeted the news warmly and did not seem one bit surprised and there was reference in one analyst report to this news having been shared at some recent point. Mr. Sheridan knows the business well and took most of Q&A today. Mr. Blickenstaff’s role as Executive Chairman will involve focusing on “external and corporate strategy efforts and continuing to build Tandem’s board for the future.” In the past year, Tandem’s Board has brought on Qualcomm Life’s highly respected Rick Valencia and recently added Versant Ventures’ Beckie Robertson. Mr. Blickenstaff has done an incredible job of leading Tandem through thick and thin, including its unique and energetic culture. The pressure will be on Mr. Sheridan to carry the leadership torch forward – maintaining Tandem’s customer obsession, earning the respect of the team, and maintain the current all-time-high investor confidence. Robertson has diabetes experience, having worked for multiple years at LifeScan; she also led the deal at Versant to invest in Intuity Medical back in 2010. She is currently in venture capital at Versant Ventures; Versant colleague Ross Jaffe was on the board of Insulet for many years and she will no doubt benefit enormously from his experience and acumen and knowledge in pumps.

1. Tandem Control-IQ US launch pushed back to Summer-End of Q3 (September), Depending on New Pediatric Study (6+ Years); ADA 2019 to Share Pivotal Trial

Tandem now expects the Control-IQ/G6 hybrid closed loop with automatic boluses to launch in the US between “summer and end of Q3 (September),” as a brand-new study in 6+ years could enable a pediatric launch out of the gate. This is back slightly from the longstanding plan to launch this “summer,” though a strategic tradeoff to launch with pediatric and adult labeling out of the gate (and to better compete with the 670G, which is already approved for 7+ years and with a 2-6 year old indication expected within one year). The ongoing six-month, Control-IQ pivotal study in 14+ years is fully enrolled (n=168), will wrap up in April, and will report data on Sunday of ADA 2019. The primary endpoint is time-in-range with Control-IQ vs. sensor-augmented pump therapy (no automation). Last week at ATTD, we learned that not a single study participant has dropped out at any site – a remarkable vote of confidence in the next-gen hybrid closed loop with automatic boluses and the no-calibration G6. The new Control-IQ pediatric study – also first mentioned at ATTD – will enroll n=100 participants (6+ years) in a four-month crossover design. Tandem and the FDA are currently discussing the submission cadence, and depending on how fast the new pediatric study enrolls, Tandem will either wait for the pediatric data (expected “this summer”) or proceed with submission in 14+ years first. Regardless of what is decided, Tandem will likely have the second hybrid closed loop on the US market, and the first with automatic boluses and no fingerstick calibration.

2. Basal-IQ to launch OUS this year, but no specific country timing shared

Tandem’s Basal-IQ with G6 integration will begin launching this year outside the US, but timing will vary country-to-country. This was less specific than September’s Analyst Meeting, which called for an “early 2019” Basal-IQ launch outside the US. Tandem already has a lot of the building blocks in place – see tremendous OUS traction above – and G6 availability will absolutely determine where it makes sense to launch. Management declined to name specific countries, but did say reimbursement, distributors, and Animas customers will impact where to launch. Right now, Tandem’s t:slim X2 with G5 integration is available in nine OUS countries: Australia, Italy, New Zealand, Denmark, Norway, Sweden, South Africa, Spain, and the United Kingdom. Canada is an obvious next choice, though we’d note that Dexcom won’t launch G6 until late 2019, following the CGM’s Health Canada approval announced last week.

Tandem will launch its t:slim X2 mobile app for Apple and Android in the first half of this year, offering wireless data uploads from the t:slim X2 pump to t:connect. This app launch has now been delayed two quarters in a row – from “end of 2018” (September Analyst Meeting) to “early 2019” (3Q18) to the new 1H19 timing. The good news was confirmation of both Android and Apple launch; previous screenshots showed Apple iPhone only. Wireless smartphone control of the pump remains the ultimate goal for this app (as it should be!), though it’s unclear if that will be available for t:slim X2 or wait for t:sport (see below). Insulet expects smartphone control with Omnipod Horizon in 2H20, but only for Samsung Galaxy phones at launch. Will Tandem get smartphone control on both Apple and Android by next year?

This year, Tandem expects to complete the “majority” of t:sport design and testing, including plans to order manufacturing tools by year end. The company will seek an ACE pump designation for t:sport in the second half of 2020; launch timing was not shared, though that was expected in 2H20” as of the September’s Analyst Meeting. Tandem also plans to submit for CE mark in 2020. As a reminder, t:sport is a miniaturized, screenless, wirelessly controlled tubed pump, which will include Control-IQ hybrid closed loop and iCGM integration (no new clinical data will be needed). The no-screen pump will be controlled via app on a user’s own phone. t:sport is half the size of the current t:slim; will switch to a syringe-driven pumping mechanism (a fairly big manufacturing change for Tandem); and will add wireless charging, water resistance, an on-device bolus button, and an easier fill process. Closed loop will still run if the phone is out of range, keeping Tandem more competitive with the system design of Insulet’s Omnipod Horizon. (Though t:sport will have tubing, whereas Omnipod will remain tubeless.)