Today, Dexcom announced FDA approval of Share, its docking cradle for remote monitoring of G4 Platinum CGM data on Apple devices. This reflected an ~15 - month review following the filing in July 2013. The Share cradle is already available for order on Dexcom’s website for $299, no prescription required, and will begin shipping this Wednesday. The Share and Follow apps are not yet available on the app store, but we assume they will be soon. We had been expecting this approval for some time, as Dexcom’s 1Q14 call in May said that Share was “in the final stages of review,” and the 2Q14 call in August said it was deemed “approvable” by the FDA. This still demonstrates the complexity of getting something through US regulatory channels.

As we have covered in detail previously, the Share system consists of three components: a docking cradle for the G4 Platinum (plugged into a wall power outlet), the Share app, and the Follow app. To use Share, a patient would plug her G4 Platinum receiver into the Share docking cradle, which both charges the receiver and transmits CGM data every five minutes to a nearby iPhone or iPod touch via Bluetooth. The Dexcom Share app on the nearby smartphone then receives the CGM data and sends it up to a secure Internet server. Once there, the real-time CGM data can be shared with up to five followers’ Apple devices, including notifications and alerts. An Android version is in development, though there is no formal timeline. Though the SweetSpot cloud-based retrospective data management platform is currently under FDA review, Share will not send data to it; however, that is a possibility with Gen 5.

Overall, the Share approval is a win for Dexcom as it looks to improve sensor utilization, build its pediatric penetration, and pave the way for Gen 5 (same back-end software architecture). We do not see Share as a significant revenue (or profit) stream, since the margins on the very favorable $299 pricing are very low, and Dexcom is not charging a subscription fee to use the Share service, as one has to pay for Nightscout (since a separate phone is needed). There is no reimbursement at this stage (“it’s a CGM accessory”), and we do not expect to see Dexcom pursue it – Gen 5 will likely come to market before Dexcom can collect enough data to prove Share’s value (e.g., reducing severe nocturnal hypoglycemia) and collecting the data itself may well be a distraction given all Dexcom has to focus on. While some uptick in new patient adds is possible with Share, we imagine the major inflection point in new patient adds will come with the Gen 5 mobile system, which is now easier with this approval.

The target market for Share is children with type 1 and their parents, as well as type 1 adults with involved partners/caregivers – use cases include CGM monitoring at night, while a child is at a sleepover or at school, and while a loved one is on a business trip. The Share cradle is intended to be plugged into a wall outlet, which does limit portability; however, we assume that with an external USB battery pack (e.g., Mophie), the cradle could easily be carried classroom to classroom, brought on a camping trip, outside, etc. As a reminder, Medtronic launched its own remote pump/CGM monitoring product, mySentry, though the high price ($3,000) and limited range (50-100 feet in house, no cloud connection) have significantly limited commercial uptake. Dexcom clearly learned from the high price strategy in offering Share at a modest $299.

Below, we include more details on Share, Gen 5, what this approval means for Medtronic, comparisons to Nightscout, implications for patients, and our key questions. 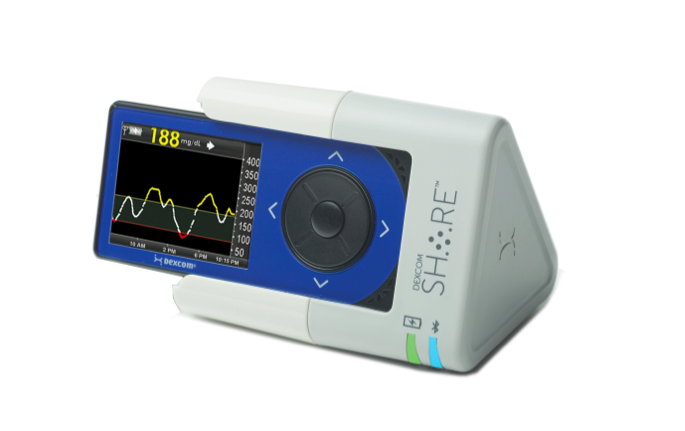 Q: What fraction of Dexcom’s installed base will purchase Share?

Q: Will the FDA approval of Share accelerate the review of Gen 5?

Q: What will ultimately happen with Nightscout from a regulatory perspective? Now that Dexcom Share is out?