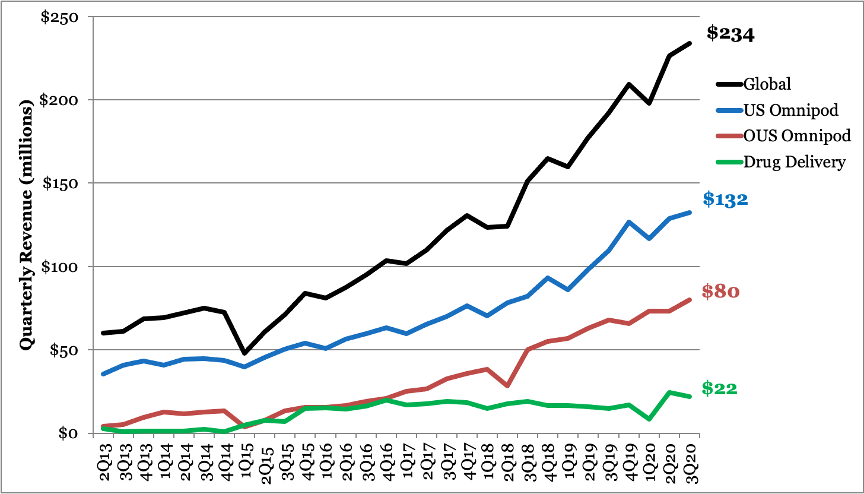 Insulet reported record total 3Q20 revenue of $234 million, rising 22% YOY (+20% operationally) on a tough comparison to 27% YOY growth in 3Q19. Insulet continues to outperform guidance: this quarter, revenue came in ~$9 million above the high end of the guidance range given in August. The guidance beat was driven by a ~$6 million beat in worldwide Omnipod revenue and ~$3 million beat in Insulet’s Drug Delivery business. Total Omnipod revenue 20% YOY, as reported (+18% operationally), to $212 million. US Omnipod revenue drove 54% of growth in the quarter. Despite lingering COVID-19 impact, 3Q20 marked the ninth straight quarter of >20% YOY revenue growth for the company.

Despite COVID-19 headwinds, Insulet once again raised its total revenue growth range guidance to 20%-21% from 17%-19%. This increase implies full year 2020 revenue of $885-$893 million and a ~$18 million raise at the midpoint. Impressively, today’s updated guidance exceeds Insulet’s pre-COVID guidance from the beginning of the year of 15%-19% YOY growth. The guidance ~$18 million guidance raise comes off a ~$22 million guidance raise last quarter. Omnipod revenue is now expected to grow 21%-22% for FY20 with US Omnipod growth guided at 23%-24% and international Omnipod growth of 18%-19%. Drug Delivery also saw a slight increase in guidance to 4%-6% growth for FY20. Following this updated guidance Mr. McMillan stated “we now expect that global customer new starts for the full-year of 2020 will improve to approximately 75% of our beginning of the year estimate.”

We heard a number of updates from Insulet on manufacturing, most notably that the company has invested in another contract manufacturer in China. As a reminder, Insulet already has a manufacturer partner in China. The new manufacturer will have two production lines, which are already “up and running,” though not yet producing sellable product. The new contract is part of Insulet’s efforts to not only expand its manufacturing capacity, but also build redundancy. As there’s no product coming off the line yet, the new manufacturing site did not impact cost of goods sold in 3Q20, though Mr. McMillan estimated that the new site would have an impact “either later this year or in early 2021.”

In 3Q20, Omnipod Dash drove “approximately 65%” of new US patient starts, in line with numbers from 2Q20 and 1Q20. The growing adoption of Dash comes with expanding US coverage; at the end of 3Q20, “65% to 70%” of US lives were covered. This is an increase from “approximately 65%” in 2Q20 and “over 60%” in 1Q20. We again did not hear updates on Medicare and Medicaid beneficiaries, but as of 1Q20, “over 50%” of Medicare and “approximately 70%” of Medicaid beneficiaries had coverage for Dash. The pay-as-you-go, primarily pharmacy access, no upfront-cost, Omnipod Dash system is driving a number of positive trends for Insulet:

Although international markets have seen slower recovery due to the COVID-19 pandemic, Insulet is “very bullish” about its long-term international market expansion strategy. Excitingly, Insulet announced full commercial rollout of Dash in September, ahead of schedule based on 2Q20 expectations to roll Dash out in “early 2021.” Worth noting, “now 100%” of new customers in Europe start on Omnipod Dash; to our knowledge, Insulet still plans to support existing customers on non-Dash Omnipod. During the call, management reiterated that five international expansions will be completed by “early 2021,” a delay from pre-COVID expectations to enter the markets this year. One of these markets is Belgium, into which Dash already expanded in September. The other four markets are yet to be identified. Per Ms. Petrovic, their identities will be disclosed once Dash is set to enter.

Ms. Petrovic’s prepared remarks offered several updates on the timeline for Insulet’s Omnipod 5 hybrid closed loop system. At EASD 2020 in September, we learned that the three-month US pivotal study (ages 7+) was complete. As a reminder, we saw the strong pre-pivotal data at ADA 2020, which highlighted particularly strong usability and hypoglycemia results. During today’s call, Ms. Petrovic shared that “virtually all” pivotal trial participants remained on Omnipod 5 in the pivotal’s extension phase, both suggesting high satisfaction with the system and providing additional data on Omnipod 5’s value to bring to payers and clinicians. Notably, Ms. Petrovic also reiterated that Omnipod 5 remains “on track to launch in the first half of this coming year.” Omnipod 5 will begin with a limited market release, followed by a ramp up through the rest of 2021, the speed of which will depend on the success of the limited release, market access, manufacturing capacity, and customer feedback. During Q&A, Mr. McMillan noted that this means Omnipod 5 will not have a material impact “until the second half of the year [2021].”