Early yesterday morning, Roche CEO Mr. Severin Schwan led the company’s 4Q14 and full-year financial update. Overall, the global Diabetes Care business showed some signs of stability despite “continuous challenges” – of course, this was relative to an easy comparison when sales declined 7% in 4Q13. It is notable to see two products planned for 2015 despite financial challenges as Roche sees “innovation potential” in the BGM landscape. Below, we bring you the top financial and R&D highlights from the call; there was no relevant Q&A.

2. In North America, Diabetes Care revenue totaled 122 million CHF (~$126 million) in 4Q14, declining 8% against an extremely easy comparison (sales fell 27% in 4Q13). On the plus side, the business did see positive/flat sequential growth for a third consecutive quarter. For the full year, North America revenue totaled 442 million CHF (~$483 million), down 8% as reported and 6% operationally YOY. This was Roche’s lowest US fiscal year revenue in the past decade.

4. Combined global revenue for J&J, Roche, and Abbott fell 8% relative to pooled revenue in 4Q13 (pooled revenue declined 7%). Abbott had the weakest 4Q14 performance (down 10% YOY) compared to J&J (down 9%) and Roche (down 1%). J&J’s US business has been the hardest hit in the past few years, while Roche and Abbott have seen more moderate declines.

5. Roche is engaged in global restructuring plans aimed at enhancing the long-term profitability of the business. Reorganization costs totaled a fairly significant 118 million CHF (~$129 million) in 2014.

6. In 2015, Roche plans to launch the Accu-Check Active (next-gen BGM) worldwide and the Accu-Chek Connect System (standalone meter + smartphone app + web portal) in the US.

7. Despite the many challenges in the market, management shared optimism for its Diabetes Care division, and noted, in reference to its BGM products – “Indeed, there’s still innovation potential in this business.”

9. US sales of Lucentis (intravitreal ranbizumab) declined 5% YOY in constant currencies to 441 million CHF (~$457 million) in 4Q14, while full-year 2014 sales rose 2% YOY in constant currencies to 1.7 billion CHF (~$1.9 billion). Management commented that 2014 growth was largely driven by the DME indication and offered a more conservative outlook for 2015 due to “increased competition” (both Eylea and Iluvien received FDA approval for DME in 2014).

1. Worldwide Diabetes Care revenue totaled 671 million CHF (~$696 million) in 4Q14, declining 1% as reported and growing 1% operationally year-over-year (YOY). This marks the fourth consecutive quarter in which operational growth has been neutral or positive, though we’d note that the performance came against an easy comparison to 4Q13, when sales declined 4% operationally. Additionally, while revenue fell only 1% as reported in 4Q13, this was against a 7% reported decline in 4Q13. Notably, Roche is the only one of the Big Four BGM companies (J&J, Abbott, Bayer) that did not experience a double-digit YOY decline during some quarter in 2014. On the other hand, the company has not had a quarter with YOY growth above 3% since 1Q10, so a breakout quarter seems unlikely going forward. Sequentially, worldwide sales grew 16% from 3Q14, a bit lower than the ~18-26% sequential gains from 3Q to 4Q we’ve seen in the past three years.

EMEA = Europe, Middle East, and Africa. RoW = Latin America, Asia-Pacific, and Japan. Currency conversion based on average exchange rate from October 1 – December 31 (for 4Q14) and from January 1 – December 31 (for FY14) on oanda.com: 1.037 USD per CHF and 1.094 USD per CHF, respectively. Roche does not provide operational growth for its regional breakdown in the quarter. 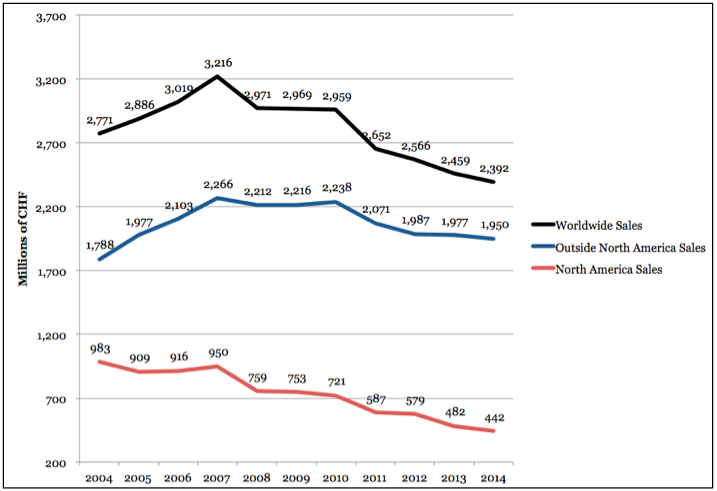 2. In North America, Diabetes Care revenue totaled 122 million CHF (~$126 million) in 4Q14, declining 8% against a very easy comparison (sales fell 27% in 4Q13, the greatest drop for North American revenue since we began reporting in 2006). In prepared remarks, management did not comment at all on the North American business, and to no surprise, given the consistent challenges – in the past 28 quarters (since 1Q08), Roche has recorded only four quarters of positive YOY reported growth in North America. There is a glimmer of hope as the business did see positive/flat sequential revenue for the third consecutive quarter in the US in 4Q14, a pattern we have not seen since 2008 (2Q – 4Q). That said, the seasonality of the BGM business means sales always pick up in 4Q (positive/flat sequential growth every year since 2006).

3. Outside North America, Diabetes Care sales totaled 549 million CHF (~$569 million) in 4Q14, growing 1% as reported YOY against flat growth in 4Q13. Notably, this marks two consecutive quarters of YOY growth for the business outside of North America for the first time since 2010 (1Q – 2Q) and the highest non-North America sales for a quarter since 4Q12 (also 549 million CHF). As a reminder, Roche breaks out its non-North America revenue into two groups – Europe, Middle East, and Africa (EMEA) and Latin America, Asia-Pacific, and Japan (RoW) – sales were split roughly 75/25 between the two for sales outside of North America.

4. Combined global revenue for J&J, Roche, and Abbott totaled ~$1.5 billion, falling 8% relative to pooled revenue in 4Q13 (~$1.7 billion). This comes against an easy comparison as combined revenue declined 7% a year ago. Abbott had the weakest growth (down 10% YOY) for the third consecutive quarter vs. J&J (down 9%) and Roche (down 1%). As a note, it is difficult to make direct comparisons between J&J, Abbott, and Roche, given that each company’s Diabetes Care business includes a fraction of non-BGM revenue (J&J and Roche have global insulin delivery and Abbott has CGM outside of the US). We look forward to adding the last of the Big Four – Bayer – to this comparison when the company reports on February 26. 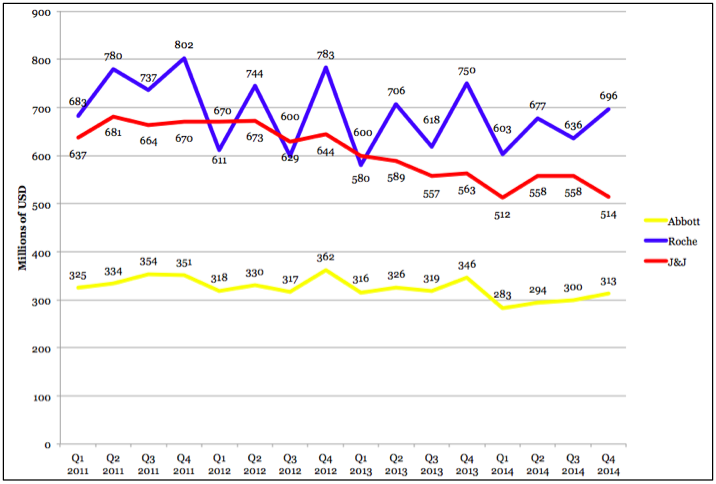 5. Roche continues to implement global restructuring plans aimed at enhancing the long-term profitability of the global business. As a reminder, Roche announced the “Autonomy and Speed” initiative in September 2013; we assume that the program reflects a mix of cost cutting and strategies originally designed to respond to CMS’ competitive bidding program. According to Roche’s Finance Report, the company incurred 118 million CHF (~$129 million) in various costs associated with the initiative (IT-related, consultancy, etc.) in 2014. Judging from the language (“ongoing structural adjustments”), it appears that reorganization efforts will continue into 2015. The company has not provided a timeline for completion nor has it provided details on specific strategy.

6. Roche’s supplementary materials highlighted two planned device launches in 2015: the Accu-Check Active BGM (worldwide) and the Accu-Chek Connect (US). This is the first we have heard of the next-gen Active BGM. The slide deck provided few details on timeline or meter features (as is standard nowadays, the strips are no-coding). The first-gen Active BGM was launched in the EU in 2Q13 but never made it to the US market. A search of the FDA database revealed that the meter has yet to be filed with the Agency; this would have to happen soon if a US launch is to be included the 2015 “worldwide” launch.

7. Despite the financial challenges of the BGM market, Roche seems committed to continued R&D – “Indeed, there’s still innovation potential in this business,” said management. This was a breath of fresh optimism in an environment that has been so devastated by competitive bidding. In 2014, Roche launched three new devices: the Accu-Chek Insight (next gen insulin pump with BGM remote), Accu-Chek Connect (in the EU), and Accu-Chek Expert (BGM with built-in bolus advisor). Of course, not all members of the Big Four have continued to push BGM innovation in the same manner. Bayer, for example, has not brought a new product to market in the past two years. J&J has straddled the middle ground, launching two devices in the US in the past 12 months (the OneTouch VerioSync last January and the OneTouch Verio this January) but none outside the States that we are aware of. On the opposite end of the spectrum is Abbott’s bold attempt to disrupt the field with the FreeStyle Libre system in the EU.

8. Management did not comment on the development of Roche’s novel CGM, though at JPM 2015, acknowledged that the project is moving forward (“we feel we are in the race”). While hesitant to provide a strict timeline, we heard confirmation that commercialization is more than 12 months away. Roche plans to file the device in the EU before bringing it stateside (~18 months later), so we assume US commercialization would not occur before late-2017 at the earliest.

9. US sales of the ophthalmologic drug Lucentis (intravitreal ranbizumab) declined 5% YOY in constant currencies to 441 million CHF (~$457 million) in 4Q14, while full-year 2014 sales rose 2% YOY in constant currencies to 1.7 billion CHF (~$1.9 billion). Management commented that growth in 2014 was primarily driven by the diabetic macular edema (DME) indication as well as continued overall market expansion (including both new patients and patients switching from Avastin).

10. Roche’s GLP-1/GIP dual agonist RG7697 remains in phase 2 for type 2 diabetes. A phase 2 trial (ClinicalTrials.gov Identifier: NCT02205528) of the compound is currently recruiting participants and is expected to complete in September. The 12-week study aims to enroll 105 patients with type 2 diabetes on background metformin who will be randomized to receive daily injections of RG7697, Novo Nordisk’s Victoza (liraglutide), or placebo. The RG7697 and placebo groups are double-blinded while the Victoza group is open-label. The trial has a primary endpoint of change in A1c from baseline at eight weeks; secondary endpoints include change in A1c, body weight, and fasting and post-prandial glucose at 12 weeks.