CGM revenue in 2Q20 hit a record $1.28 billion, rising 29% YOY on a very tough comparison to 45% YOY growth in 2Q19. Despite the strong quarter, 29% YOY growth actually represents the lowest YOY growth rate since 2013, a testament to the momentum behind CGM and its ever-increasing base. Though difficult to quantify, we’d also guess some headwinds from COVID-19 on CGM sales. The US and international CGM markets remain close, with US revenue totaling $668 million (+35% YOY) and OUS revenue totaling $607 million (+23% YOY). Sequentially, revenue in 2Q20 rose 2% from 1Q20. 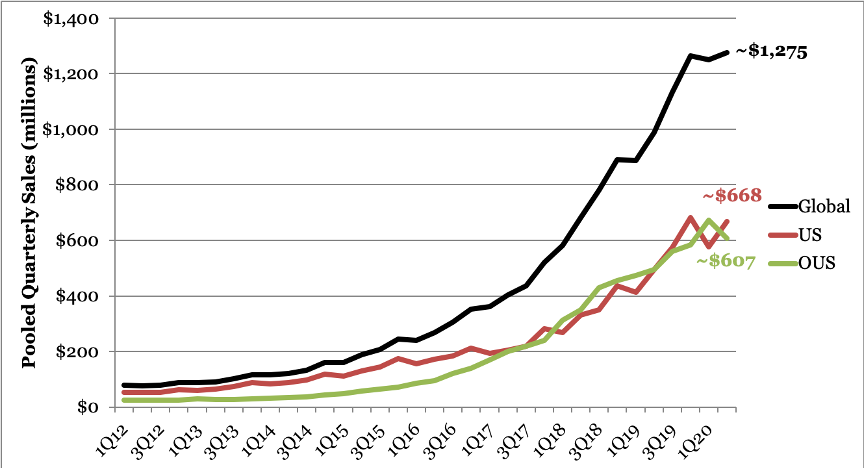 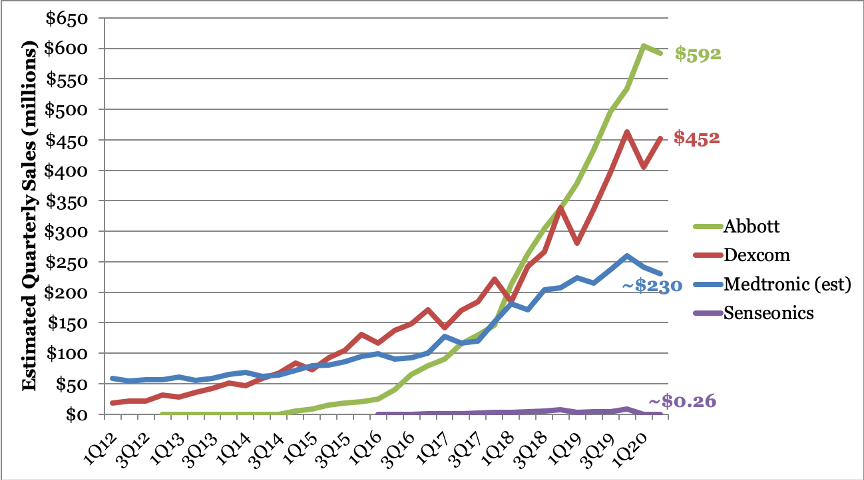 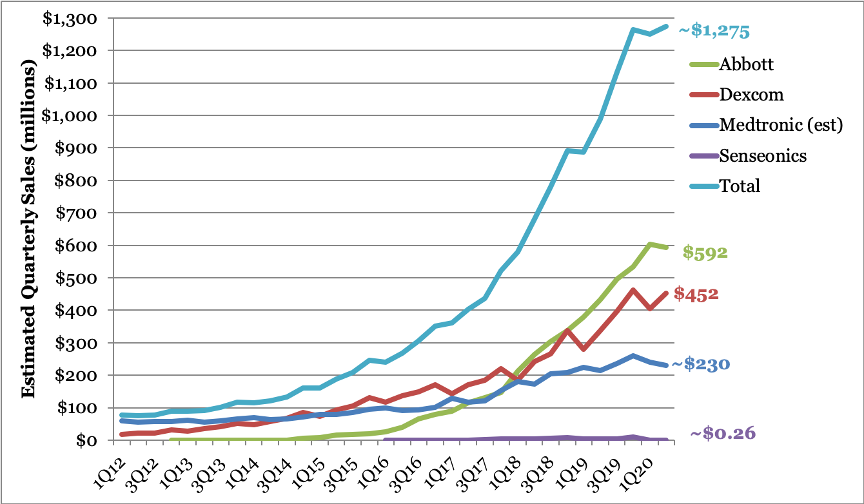 Insulin pump revenue totaled $679 million in 2Q20, declining 1% YOY on a difficult comparison to 14% YOY growth in 2Q19. By geography, US revenue grew 2% YOY to $366 million, while international revenue fell 5% YOY to $312 million. The YOY decline in international markets is the first decline in three years; undoubtedly, pump sales were affected by COVID-19 in the quarter. By market share, Medtronic continues to lead with 49% share of revenue. Still, this is the lowest market share for Medtronic in our model (which dates back to 2005) and 1Q20 was the first quarter in which Medtronic did not have market share >50%. In 2Q20, Insulet reported record revenue of $202 million (+26% YOY), representing a nearly 30% share of the total pump market. Tandem also reported record revenue in 2Q20 - $109 million (+17% YOY) represents about 16% market share. Overall, the pump market continues to see slow, but steady, growth, and with several AID systems recently launched or launching soon, we’d imagine growth will accelerate, even with the COVID-19 pandemic. 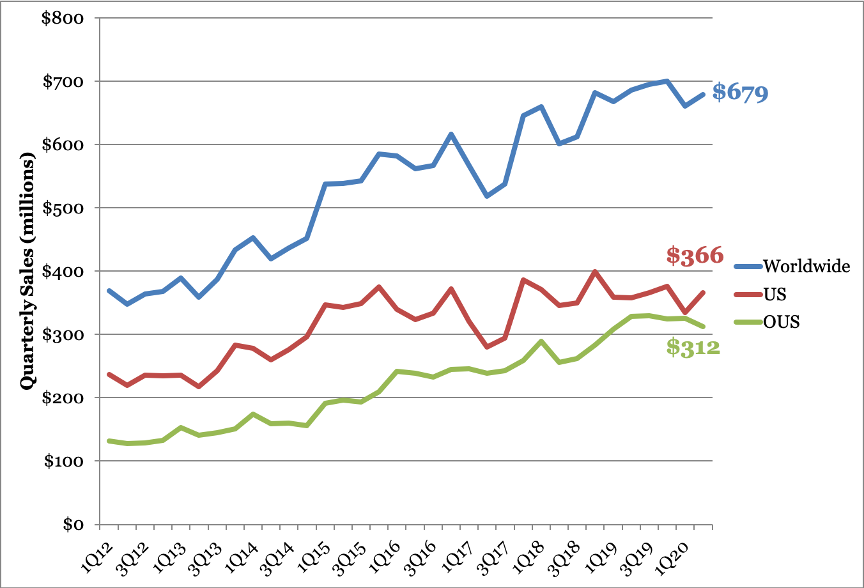 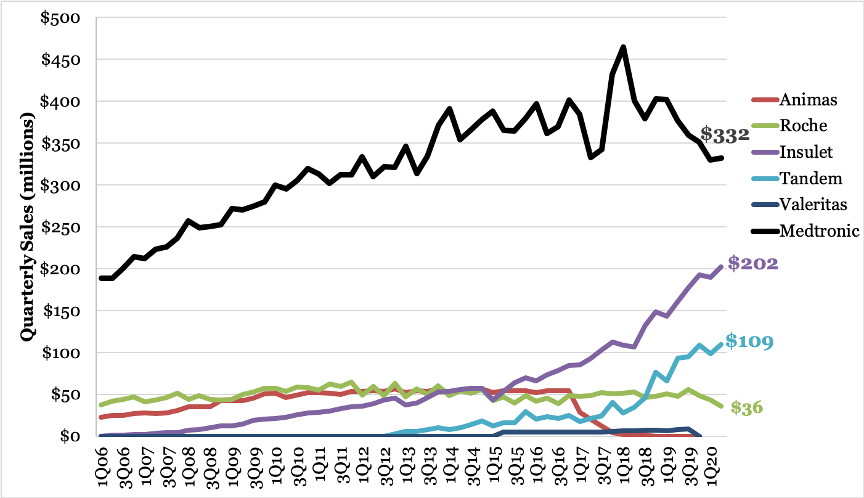 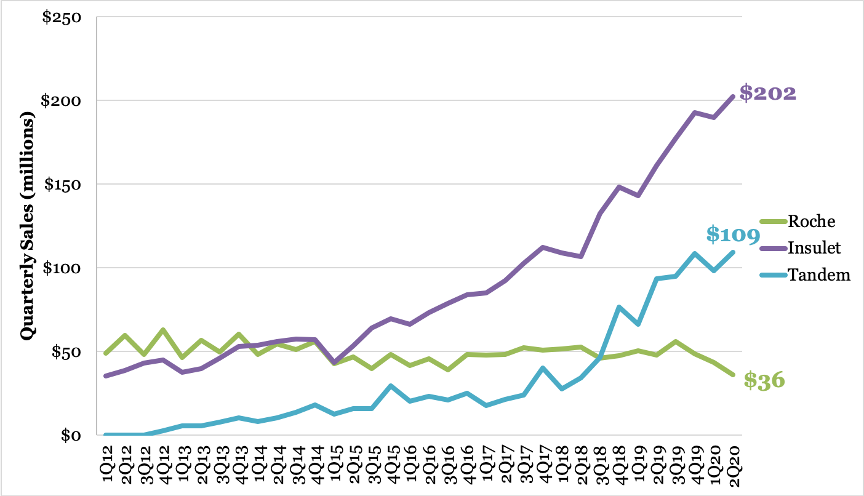 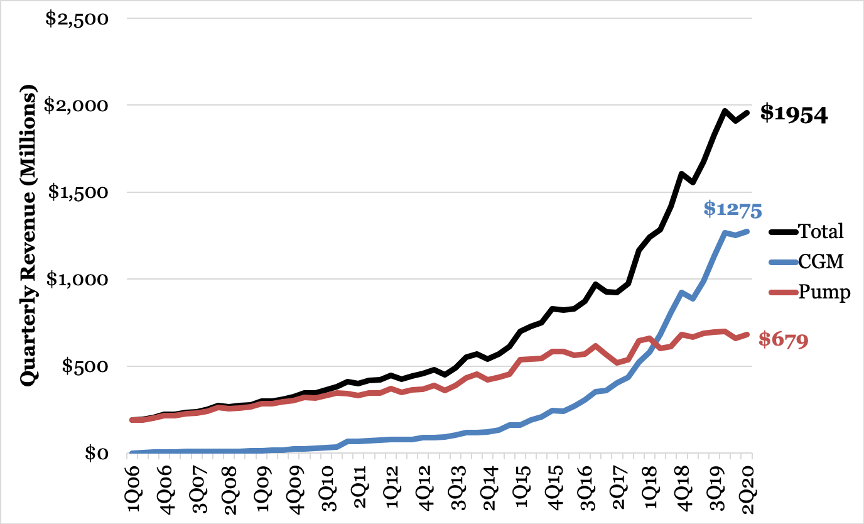 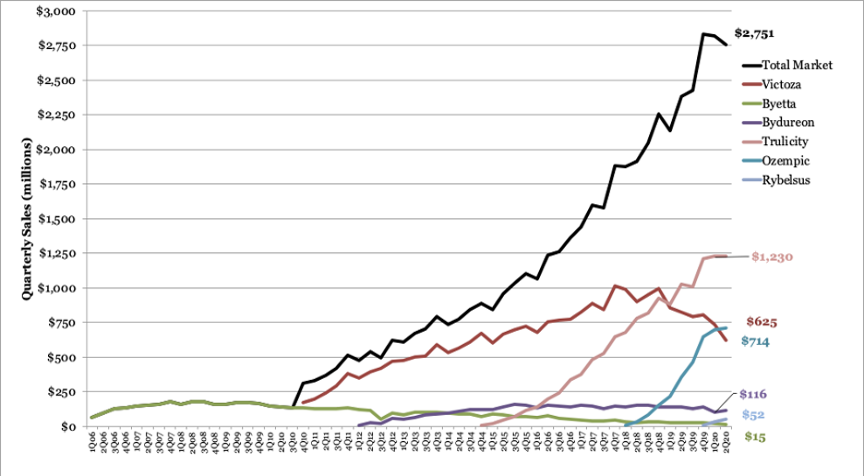 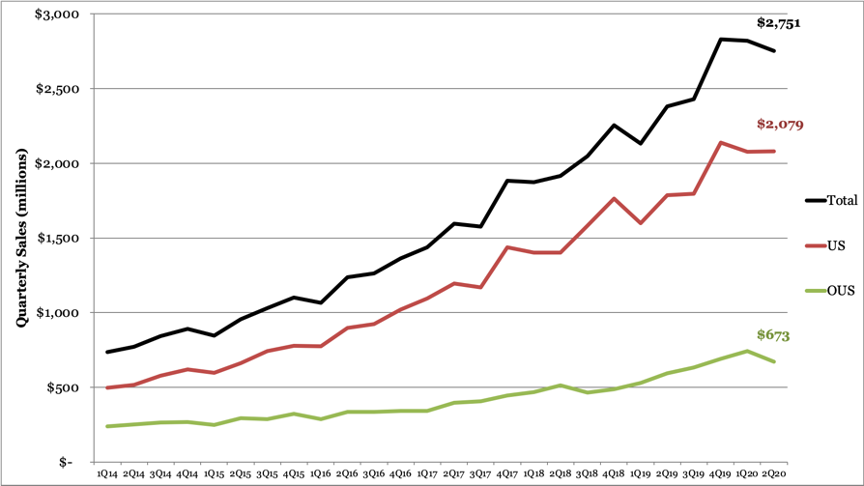 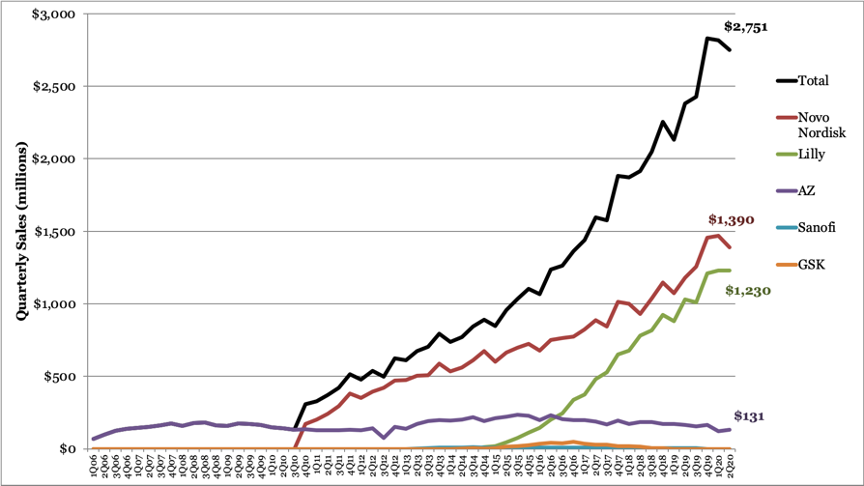 The SGLT-2 inhibitor class generated $1.4 billion in sales in 2Q20, with sales up 13% YOY and 1% sequentially. Sales in the US fell 1% to $696 million, while OUS rose 31% to $720 million. Lilly/BI’s Jardiance remains the class leader, albeit with slight sequential declines (+13% YOY, -2% Q/Q to $786 million). While not formally included in our model, as neither company reports sales, we do note that Merck/Pfizer’s Steglatro (ertugliflozin) is also available. Full results from Steglatro’s last-in-class CVOT VERTIS were presented at this year’s virtual ADA conference and demonstrated non-inferiority versus placebo on the primary endpoint of three-point MACE (HR=0.97; 95% CI: 0.85-1.11; p<0.001 for non-inferiority). 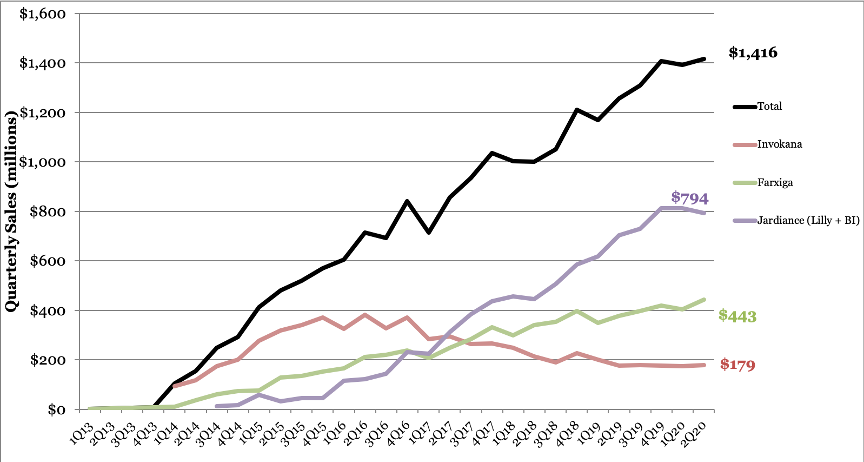 *Total Jardiance sales (Lilly + BI) have been estimated based on previously-reported sales from BI indicating share breakdown of ~33% of sales for Lilly. 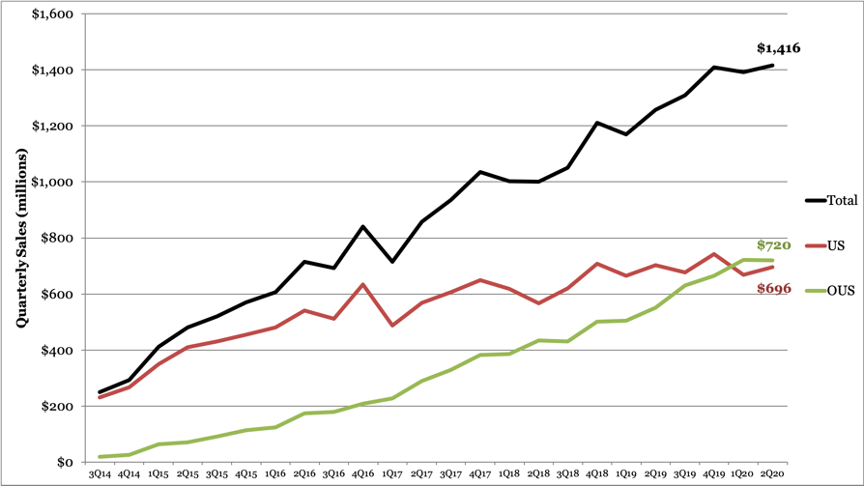 It was a tough quarter for the total insulin market at just $4.6 billion, falling 10% YOY and 11% sequentially. This is the lowest revenue we have seen for insulin since 3Q12 at $4.5 billion, though somewhat unsurprising, given patient destocking from 1Q20 and fewer medication initiations due to COVID-19. We suspect earlier initiations in other medications like GLP-1 and SGLT-2 inhibitors are also delaying insulin starts, though we also suspect that duration of type 2 diabetes is increasing overall, and that time on insulin total for those with T2D might well be increasing also, even if starting later. As in 1Q20, we saw a tale of two diverging geographies: US insulin sales of $2 billion fell 20% YOY, while OUS insulin sales remained relatively flat at $2.6 billion (-1% YOY). 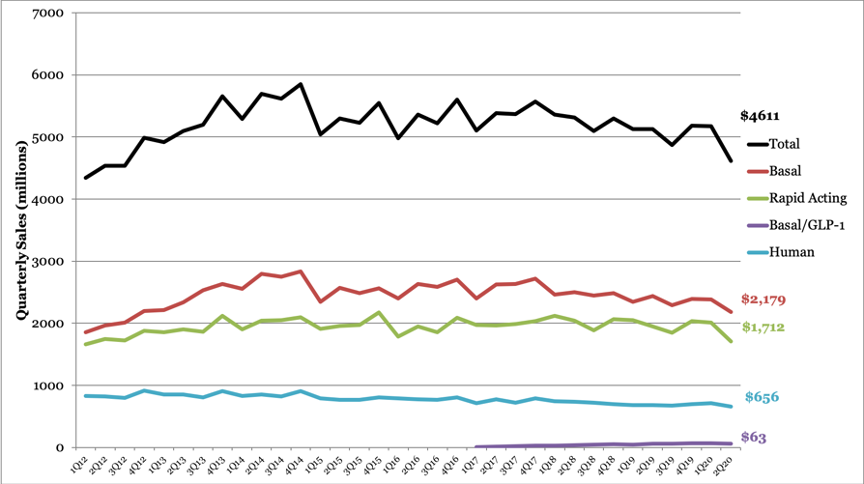 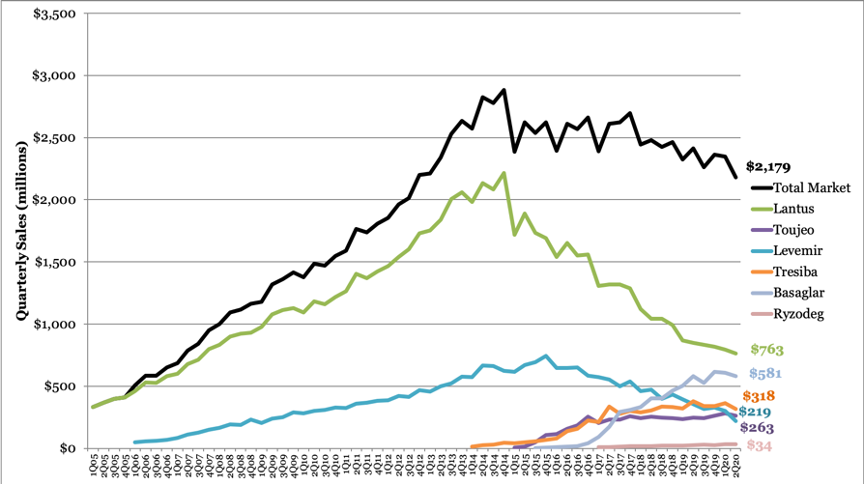 *Total Basaglar revenue is estimated from an assumed 50/50 split between Lilly/BI. Ryzodeg revenue is split 70/30 between basal insulin/rapid-acting insulin. 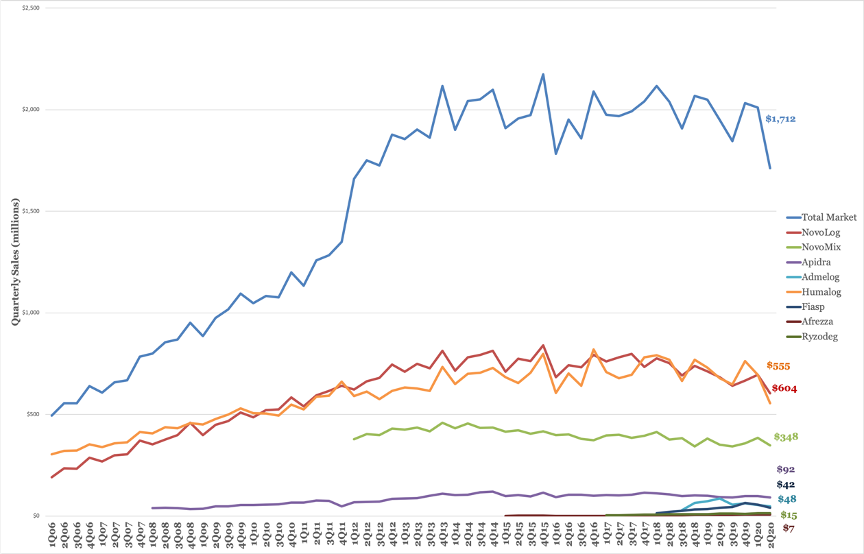 DPP-4 inhibitors generated $2.1 billion in sales in 2Q20, with sales down 14% YOY and 2% sequentially. This was the eighth quarter of negative YOY for the class as HCPs continue to prioritize GLP-1 and SGLT-2 inhibitors. Overall decreases were driven by drops in the Lilly/BI Tradjenta franchise (-50% YOY, -18% sequentially to $214 million). All franchises except Takeda’s Nesina (+10% YOY, +12% sequentially to $144 million) showcased declines. By product, Januvia tops the market at 64% SOM, followed by Novartis’ Galvus (13%), Lilly/BI’s Tradjenta (10%), Takeda’s Nesina (7%), and AZ’s Onglyza (5%). 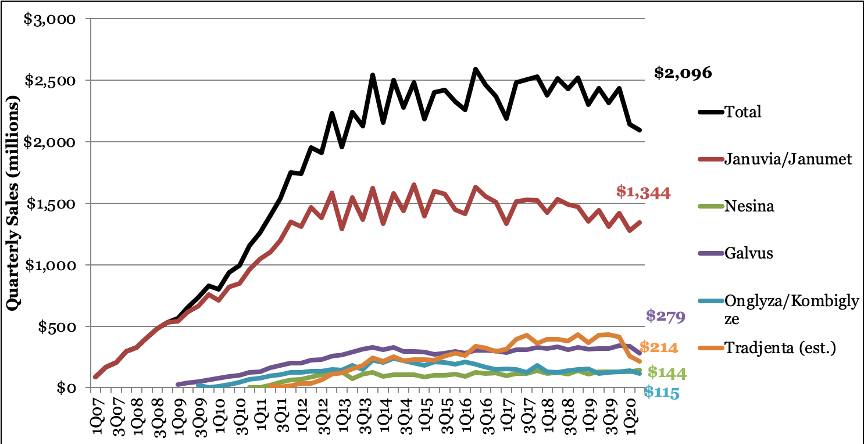 The basal insulin/GLP-1 agonist fixed-ratio combinations (FRCs) hit $127 million in sales, up 7 % YOY from 2Q19 and down 8% Q/Q from 1Q20. Performance for Novo Nordisk’s Xultophy was lackluster in 2Q20, despite laying claim to two-thirds of the market (with Sanofi’s Soliqua taking the other third). Of note, Xultophy’s market share fell from 71% in 1Q20. While Xultophy performed well in North America (up 12% YOY to $26 million), these gains were offset by poor performance in international markets (down 18% YOY and 18% Q/Q to $59 million). We suspect Xultophy’s 3Q20 launch in China will start reversing these declines, particularly since the base is so low. On the other hand, sales for Sanofi’s Soliqua soared, likely a result of its June 2020 launch in Japan and the company’s recent efforts to promote Soliqua as a first-line therapy. Sales reached $42 million in 2Q20, up 36% YOY from 2Q19 and 3% Q/Q from 1Q20.

Overall obesity market sales totaled $226 million in 2Q20, down 17% YOY and 15% sequentially. US sales dropped 7% YOY to $161 million, while international sales dropped 35% YOY to $66 million. Sales of Novo Nordisk’s Saxenda (liraglutide 3.0 mg) continue to comprise the bulk of the Obesity market with revenue totaling $193 million (-13% YOY, -17% sequentially). While we were expecting Saxenda sales to be on the upswing in 1Q20 based on upcoming Semaglutide Obesity Program (STEP) trial results, 2Q20 quarterly declines were driven by fewer patient initiations and losses in international markets (-14% YOY and -34% Q/Q to $66 million). Novo Nordisk also attributed declines to COVID-19 in Q&A, though sales currently seem to be recovering and heading toward pre-COVID levels. Saxenda currently has 61% global obesity market share. 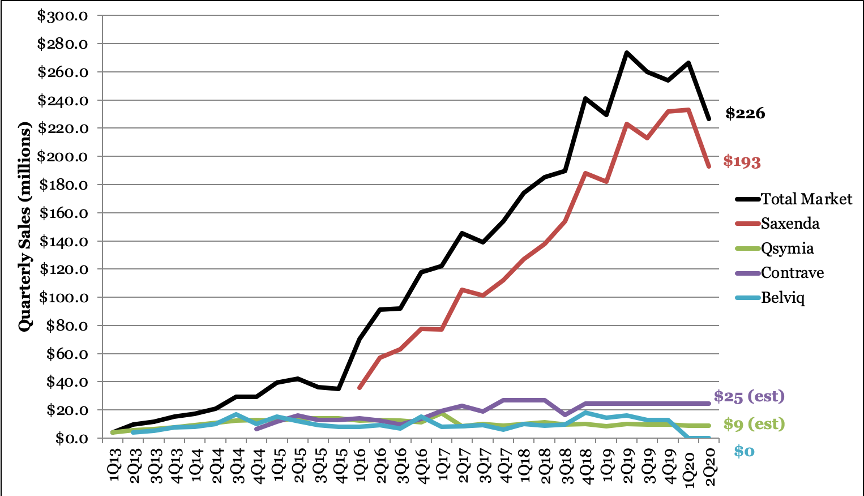 Pooled revenue for the PCSK9 inhibitor class totaled $287 million in 2Q20, up 27% YOY from 2Q19 and down 7% Q/Q from 1Q20. Amgen’s Repatha (evolocumab) continued to significantly outpace Regeneron’s Praluent (alirocumab), capturing ~80% share of NBRx and 70% share of total revenue. Despite this strong foundation, Repatha’s growth was blunted by (i) COVID-19-related sales declines; and (ii) the recent reduction in list price to increase Medicare Part D access and affordability. As CVS removed Repatha from its formulary in July 2020, further declines are expected in subsequent quarters. Praluent showed meaningful growth in 2Q20, increasing 18% YOY and 9% Q/Q to $87 million. During the company’s 2Q20 update, Regeneron provided further details on its restructuring agreement with Sanofi: while Regeneron will manage Praluent sales in the US, Sanofi will handle the franchise OUS and pay Regeneron 5% royalty on net sales until March 31, 2032. 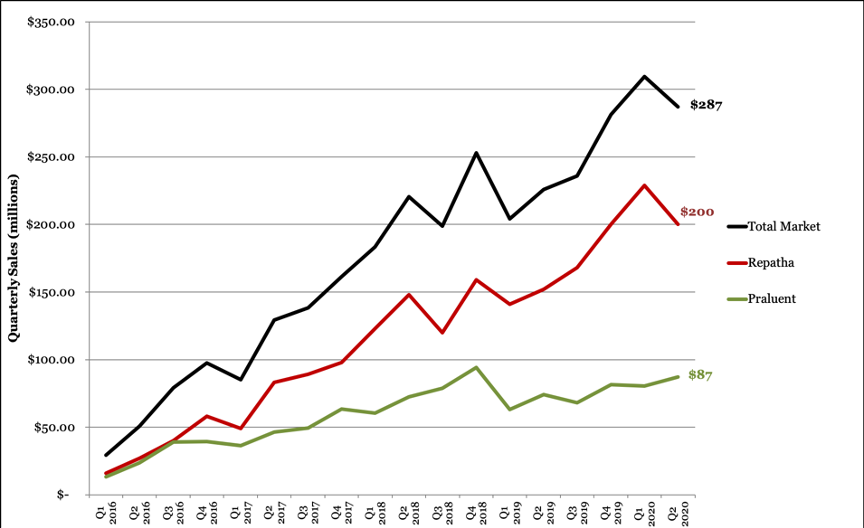 Though a longstanding issue, protests against racial inequity and in support of the Black Lives Matter movement have recently gained traction in mainstream America and around the world. COVID-19 has further exemplified disparities in health outcomes, with Black and Latinx populations dying from infection at disproportionately higher rates than their White counterparts. While it is tragic that a preventable global pandemic is what it took to put this large systemic issue at the forefront of American public consciousness, increased attention on this matter is a critical step toward a more equitable society.

As the pharmaceutical and technology fields represent financial behemoths, investments from these companies can largely advance the movement. We’ve performed a deep dive on the attention the diabetes therapy and technology companies we routinely cover have placed toward BLM or promoting diversity and equity in their companies. In addition to this, we explored the BLM responses of top-earning companies Microsoft, Facebook, Google, Amazon, Teva Pharmaceuticals, Biogen, Bristol Myers Squibb, and Allergan. See below for an overview of what we found. We will later update this piece with specifics on the responses of each company we explored.

We hope that investments continue as time goes on and that large companies remain aware of their responsibility to promote social good and effect actionable change. Given that diabetes prevalence rates are higher and outcomes are meaningfully worse among Black, Hispanic, and Native American communities, we envision hearing about programs launched by companies to lower this disparity in the future and promote a more equitable society.

While we have not previously written at any length on racial justice, we see multiple initiatives that we consider to be important steps companies can take as part of their work that goes along with examples of other spoken support for BLM. We will be in touch over time as we learn more about what best-in-class public companies and private companies and other organizations are showing in terms of progress. Multiple components of successful programs may include the following:

In therapy, 16 companies have made reference or commitments to BLM or increasing diversity. Responses ranged from press releases supporting BLM to company-wide initiatives to donate substantial funds to the movement and reorganize executive structures to hire more BIPOC leaders. In diabetes, Lilly and Johnson & Johnson made internal commitments to promoting diversity and inclusion in their workforce, as well as external commitments by publicly supporting BLM and pledging various amounts of money to different organizations to further BLM’s mission.

Technology companies responded similarly, with Microsoft, Facebook, Google, and Amazon pledging extensive funds to support BIPOC communities in diverse ways. While we hope for diabetes and medical technology companies to one day make financial contributions to the cause at this caliber, we know that these large tech companies have higher capacities to redistribute funding to social causes. Abbott, Fitbit, Medtronic, Roche, Tandem, and Ypsomed all publicly shared statements on racism, diversity, and inclusivity in the workplace – which is an integral step toward future large-scale efforts.