Hello from ATTD 2019 in Berlin – the 12th edition of this annual gathering of technology and (increasingly) therapy. Day #1 highlights are enclosed below, and our preview of the next three days is posted here. 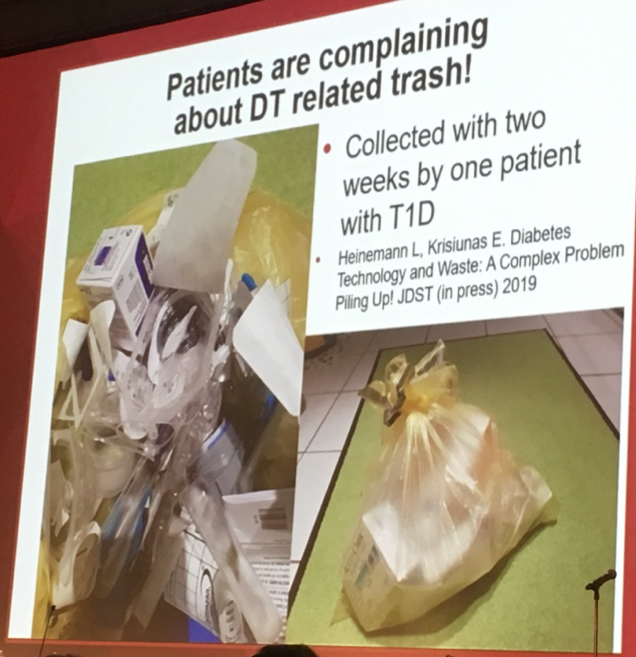 A standing-room only, practical workshop on using the MiniMed 670G highlighted an interesting dichotomy: simplicity and clarity for HCPs vs. complexity for patients. The workshop covered the system’s features and onboarding process, highlighting that healthcare providers do not have many knobs to turn in the first-gen hybrid closed loop – they can tweak insulin-to-carb ratio (the big one) and active insulin time (minimal effect). In 670G case after case, the recommended thought process was the same: (i) look for >70% time-in-range (70-180 mg/dl); (ii) look for >80% time-in-Auto Mode; and (iii) troubleshoot if either metric is too low. To get higher time-in-range, the solution was always tightening the insulin-to-carb ratio and/or encouraging pre-meal bolusing. To get more time in Auto Mode, HCPs must identify common exit reasons (usually SMBG calibrations; first picture below) and coaching patients to avoid them. Medtronic framed the 670G management process as pretty straightforward for HCPs – two metrics to watch and a small basket of solutions to fix them. “It’s a different job for us” said Medtronic’s Dr. Ohad Cohen (Director of Medical Affairs, EMEA) – this is particularly true in light of less needed focus on hypoglycemia. This was a key message to deliver to providers in the first hands-on workshop since the system’s launch last fall in Europe. Dr. Cohen also shared more real-world 670G data, covering time-in-range outcomes in n=55,000 patients and up to October 2018. Results (second and third pictures below) have impressively mirrored the pivotal trial at ~73% in 70-180 mg/dl and 2.4% in hypoglycemia. Real-world data in MDI users and no prior CGM experience are impressively similar, albeit in tiny subgroups. 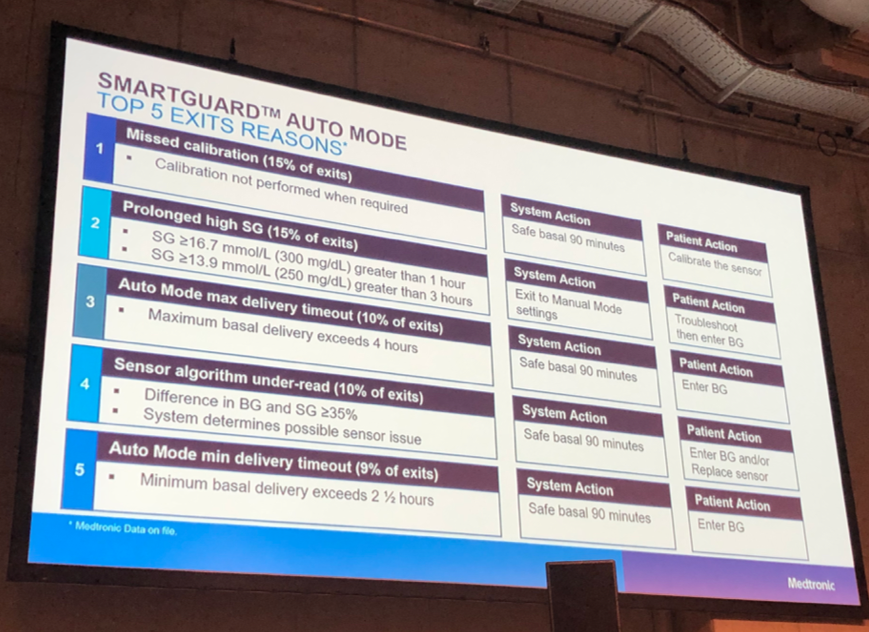 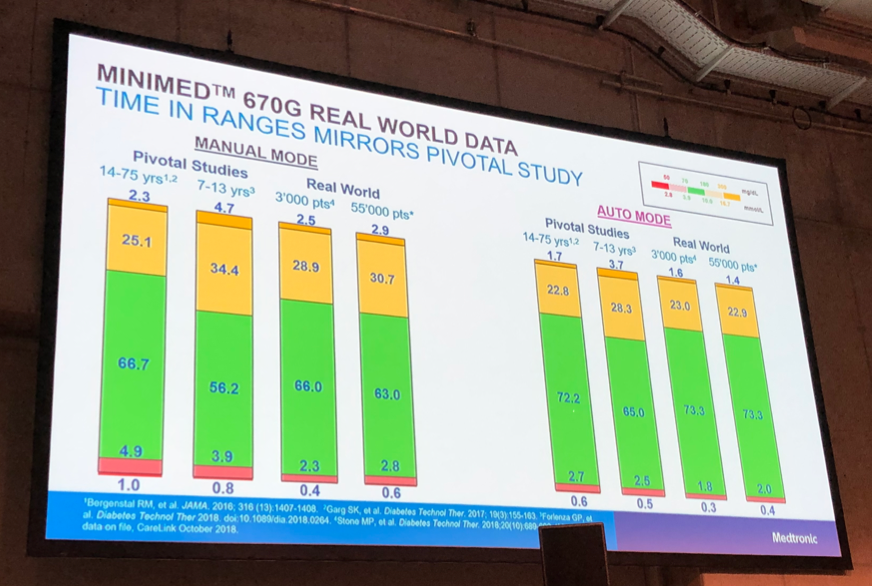 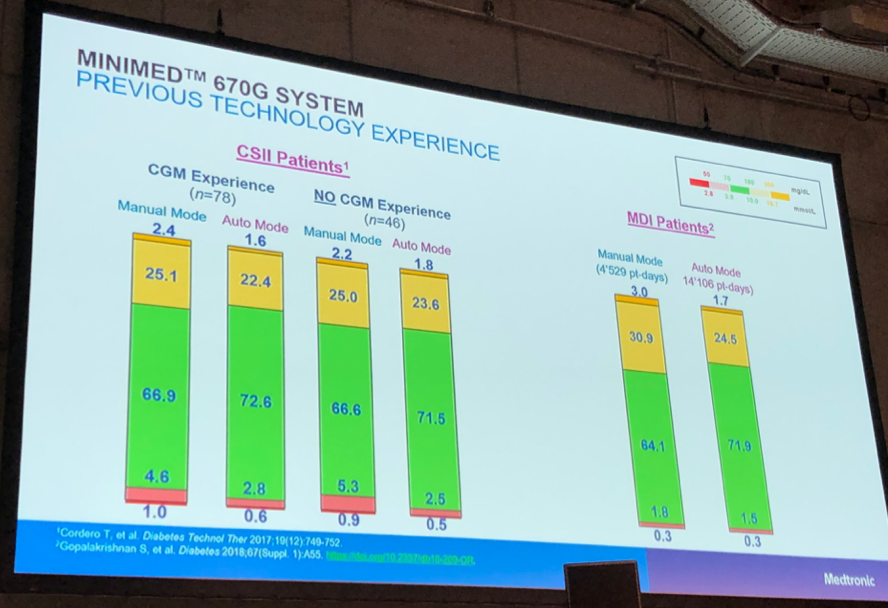 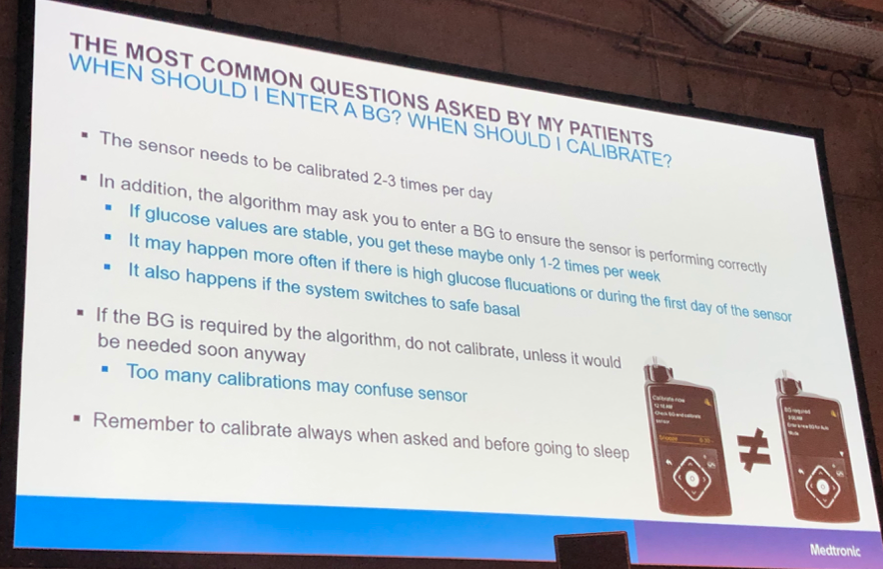 In a LifeScan-sponsored symposium, UCSD’s Dr. Steve Edelman, Prof. Katharine Barnard, and dedoc’s Mr. Bastian Hauck overviewed the future of BGM: In short, it’s not going anywhere for most patients, and the future of fingersticks has to be based in consumer-centric design, seamless connectivity, and decision support. (That sounds a lot like CGM!)

University of Leeds’ Dr. Ramzi Ajjan shared a slew of published and unpublished real-world data on FreeStyle Libre, continuing a trend (and much of the same data) from ATTD 2018 and ATTD 2017. It’s great to see Abbott churning out real-world data publications from the largest CGM user base in the world – all of it emphasizes that more frequent glucose data leads to better outcomes. 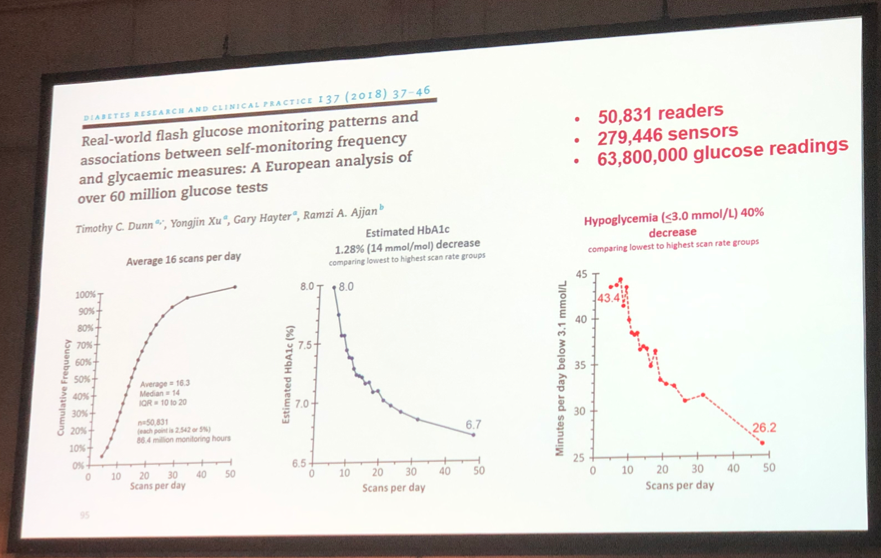 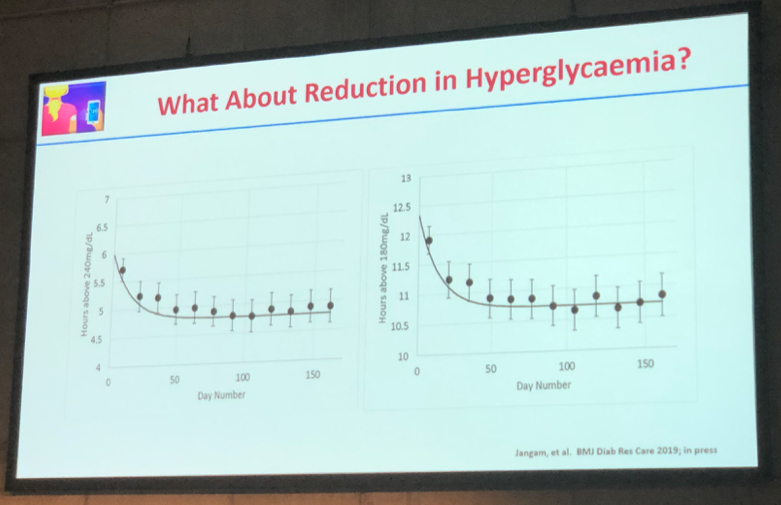 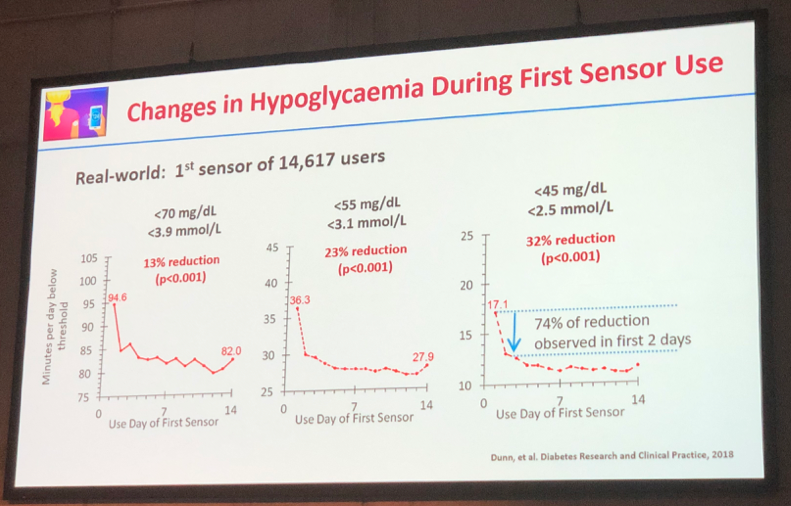 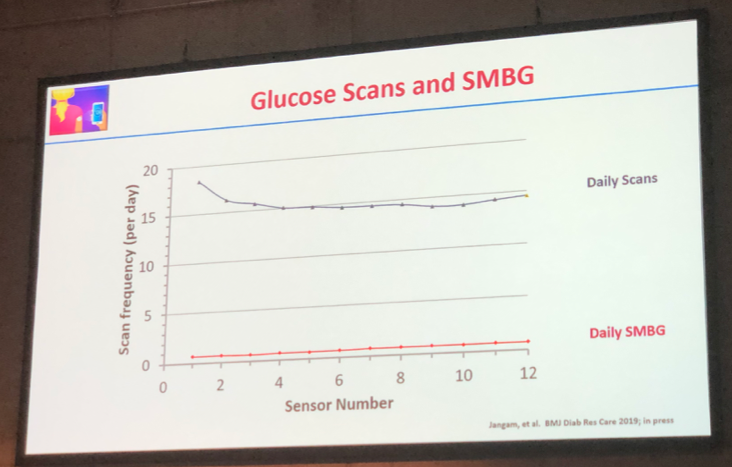 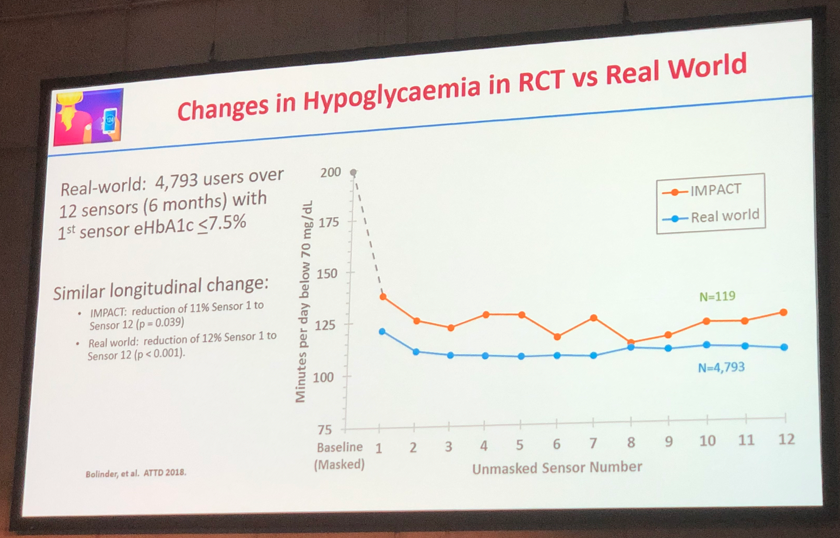 In reviewing the available phase 3 data on SGLT inhibitors in type 1, Professor Chantal Mathieu took a conservative stance, framing these agents as “promising adjunct therapies” while cautioning that “we have to strike the right balance between benefits and side-effects.” She walked through key findings from DEPICT (for AZ’s SGLT-2 dapagliflozin), inTandem (for Sanofi/Lexicon’s SGLT-1/2 dual inhibitor sotagliflozin), and EASE (for Lilly/BI’s SGLT-2 empagliflozin). As a lead investigator for the DEPICT program, Prof. Mathieu described how all trial participants received extensive education around DKA – certainly more than the average type 1 patient receives in the real world. For evidence that this education paid off, she pointed to exceptionally low rates of DKA in the placebo arm of DEPICT 1 (0% after 24 weeks and 2% after 52 weeks), which came in well below the ~8% DKA incidence seen in the T1D Exchange. There were 27 total episodes of DKA in DEPICT 1 (22 on dapa vs. 5 on placebo), and although several of these were attributed to pump failure or a missed insulin dose, Prof. Mathieu emphasized that many events were unexplained. She seemed to suggest that comprehensive DKA education is critical before any patient with type 1 diabetes starts SGLT treatment, and the question remains, how can regulators enforce this?

University of Helsinki’s Dr. Per-Henrik Groop offered mechanistic data indicating that the renal protection of SGLT-2 inhibitors well-established in type 2 diabetes could quite possibly translate to both type 1 diabetes and non-diabetic CKD, with the caution that clinical outcomes data are still to come. Most importantly on the type 1 front, Lilly/BI’s EMPA-KIDNEY renal outcomes trial (n=~5,000) is now enrolling all comers with kidney disease, including type 1s, type 2s, and those without diabetes who meet the CKD criteria (expected completion is June 2022). While it remains to be seen how large the study’s type 1 cohort will be, the expansive inclusion criteria are undeniably exciting, will offer the best evidence to date on long-term outcomes with SGLTs in type 1, and stand in contrast to both (i) J&J’s completed CREDENCE renal outcomes trial (type 2 diabetes only) and (ii) AZ’s ongoing Dapa-CKD trial (CKD with or without diabetes, but no type 1) – see below for a rundown of renal outcomes trial designs, including eGFR criteria. Kudos to Lilly for figuring out how to have type 1s in these long-term outcomes trials.

Despite his assertion that “we actually don’t know” what SGLT-2s will do to renal function in type 1s, Dr. Groop reviewed preliminary but compelling clinical data offering strong support for Lilly/BI’s decision to include this population in EMPA-KIDNEY. Namely, in type 1s, eight weeks of empagliflozin treatment has been shown to both (i) improve renal hyperfiltration (i.e., reduce glomerular filtration rate); and (ii) reduce interglomerular pressure by ~6-8 mmHg, in patients with existing hyperfiltration during both euglycemia and hyperglycemia (p<0.01 and p<0.0001 vs. baseline, respectively). No negative renal effects have been observed in type 1s with normal renal function. Moreover, Dr. Groop continued, it seems the reduction in renal hyperfiltration is driven by a significant reduction in renal blood flow and an increase in renal vascular resistance (both p<0.001 vs. baseline at 8 weeks). These last two effects are key, he showed, because they’re “consistent with afferent arteriole vasoconstriction” – the key mechanism of the “Tubular Hypothesis” proposed by Drs. Hiddo Heerspink, David Cherney, and others in a key 2016 paper in Circulation – see the full cascade of effects outlined in the second figure below. As such, it seems that SGLT-2s have a similar effect on the renal physiology of people with type 1 diabetes as they do on those with type 2, lending promise to the use of SGLT-2s to slow the progression of renal disease in type 1s. 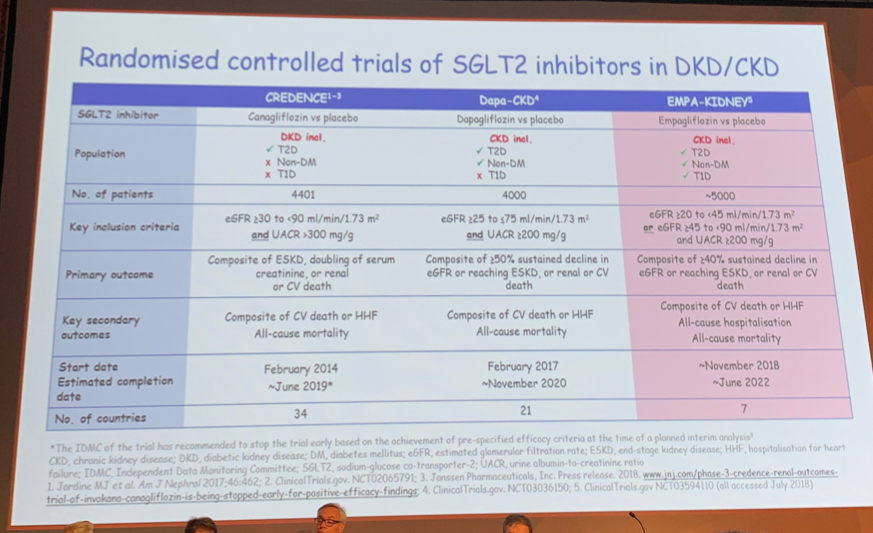 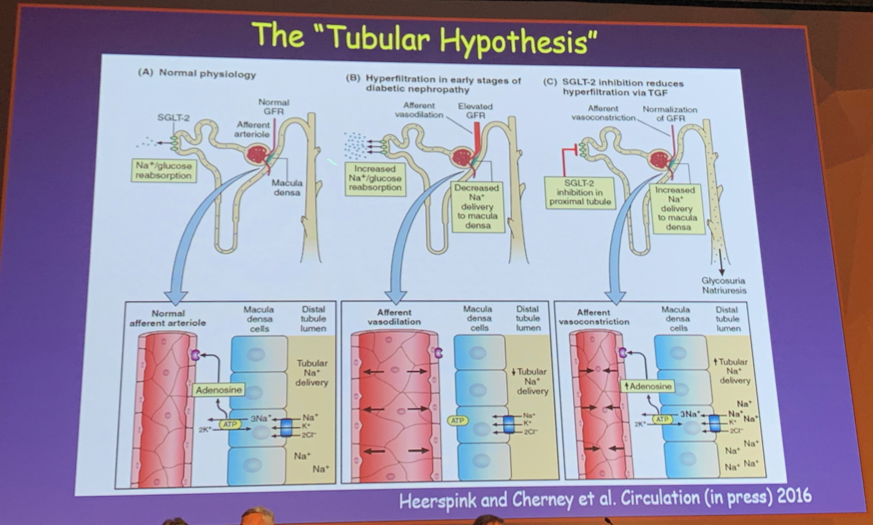 Conference co-chair Professor Tadej Battelino was critical of the EMA’s potential new indication (if accepted) for SGLT-2 inhibitor dapagliflozin (Forxiga), which authorizes its use in type 1s only if they have a BMI above 27 kg/m2. He argued that the entire type 1 diabetes population could benefit from an adjunct therapy that offers additional A1c-lowering, improved time-in-range, and weight loss – not to mention possible cardioprotection. We would not disagree but just might point out that to start, a smaller group is advised to get the therapy. To illustrate the substantial unmet need for CV risk reduction among type 1s, Dr. Battelino displayed data (image below) on greater all-cause death, CV death, and hospitalization for CV events compared to matched controls. Prof. Battelino established the relationship between glucose variability (and especially postprandial glucose variability), oxidative stress and endothelial dysfunction, and elevated CV morbidity/mortality. The jury’s still out on the precise cardioprotective mechanisms of SGLT-2 inhibitors (in type 2 or type 1 diabetes), but Prof. Battelino outlined one hypothesis in which these drugs reduce glucose variability, thereby alleviating oxidative stress and endothelial dysfunction, which brings down CV event rate, though other well-regarded hypotheses focus on other mechanisms – though, surely, these are not mutually exclusive. He added, explicitly, that glucose variability is not correlated with obesity, so limiting dapagliflozin’s use to type 1s with BMI ≥27 kg/m2 is an oversight of the most meaningful benefit an SGLT-2 inhibitor could have for type 1s – CV risk reduction. Prof. Battelino acknowledged the uncertainty around mechanism of CV benefit, but focused attention on what is certain: “If you ask about the SGLT’s cardiovascular mechanism, the honest answer is ‘we don’t know,’ but we do know that people with type 1 diabetes are only getting worse with metabolic control and consequently CV outcomes.” While many say the exact reasoning behind the committee’s decision isn’t clear to us, it seems likely that it was motivated by safety considerations rather than efficacy considerations – we believe it is a very smart starting point and presumably could broaden if all goes well. We’ve heard from thought leaders that insulin sensitivity declines at higher BMI, which could protect against DKA. Insulin requirements are also greater at high BMI, and taking sufficient insulin alongside an SGLT-2 inhibitor (while avoiding hypoglycemia) is certainly important in preventing DKA. 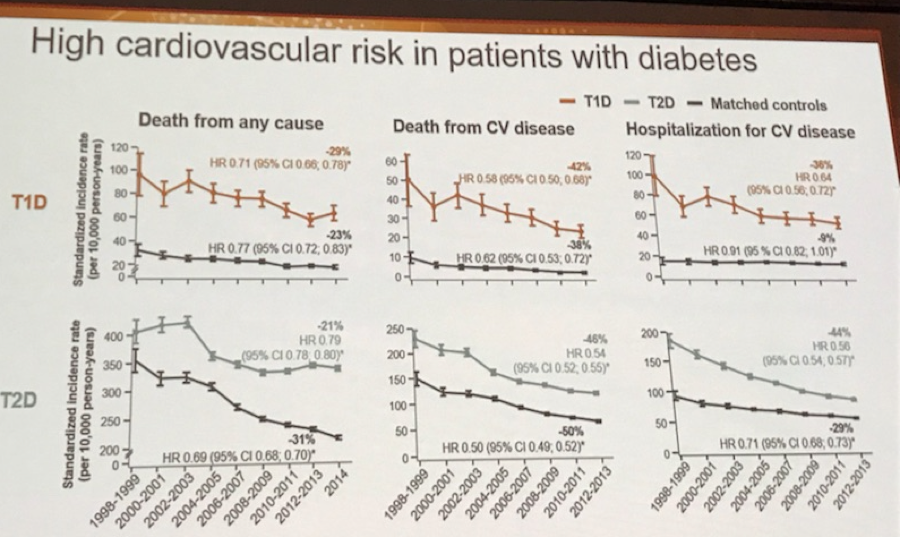 Professor Thomas Danne made a case for the adjunct use of SGLT inhibitors for type 1 in the presence of appropriate technology, also giving a nod to the future consolidation of adjunct therapies with closed-loop insulin delivery. In the wake of the publication of the landmark consensus on DKA risk mitigation with SGLT inhibitors in type 1 diabetes (see Diabetes Care), Prof. Danne – who led the consensus effort with ATTD – was tasked with addressing the intersection of SGLT-2s and technology, a talk he opened by asserting that the field can make adjunct therapy work through technology. Two threads of this argument emerged during Prof. Danne’s presentation: 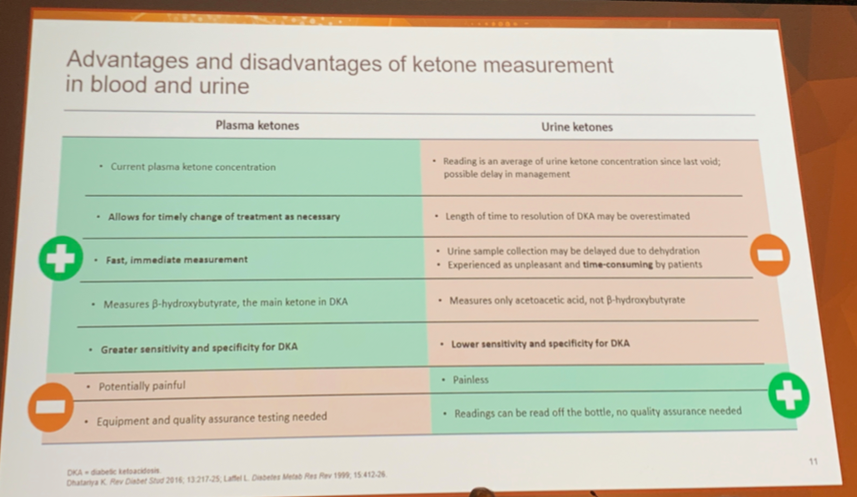 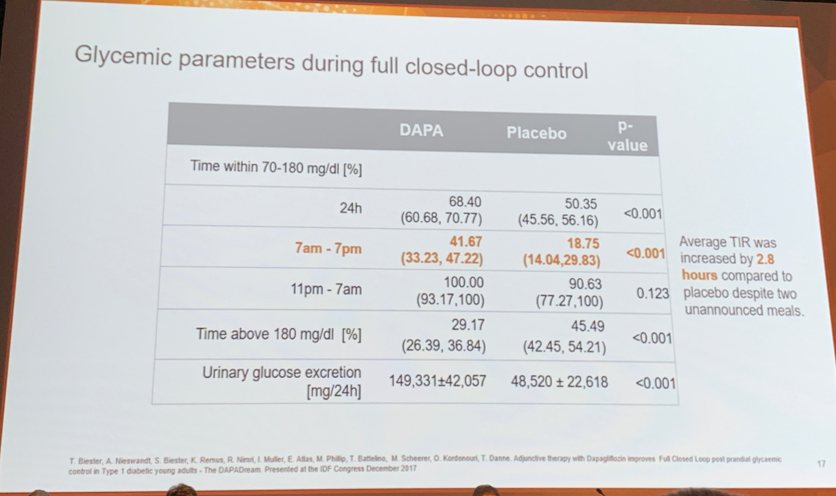