DiaMonTech’s non-invasive infrared in-clinic BGM ambitiously expected to launch in EU in 2018, followed by consumer BGM in 2019 and CGM wristband in 2021 – March 6, 2018

DiaMonTech, a startup based in Germany, has developed a non-invasive glucose monitor using patented infrared light technology developed over “10-15 years.” The company ambitiously envisions launching three products in Europe over the next four years: (i) the DMT Base, a shoebox-sized multi-user monitoring device intended for the clinic in 2018 (e.g., in-clinic screening); (ii) the DMT Pocket, a smaller, “pocket-sized” personal device for consumer use in early 2019 (pre-orders in late 2018); and (iii) the DMT Band, a wristband CGM, equipped with data logging and alarm functions in 2021. The website and product concepts look sharp, but until we see robust accuracy data, we’re skeptical.

The company website promises the characteristic revolutionary, hassle-free approach for non-invasive glucose monitoring: The user places a finger on the sensor for 5-15 seconds, and the real-time blood glucose level is then displayed. Behind the scenes, a Quantum Cascade Laser (QCL) emits mid-infrared light at a frequency absorbed by glucose, causing minute temperature changes in the skin. Resulting deflections of the light are captured and translated to blood glucose values. The Pocket (personal BGM) reportedly requires a single calibration upon arrival to accommodate a users’ skin type and “in case you want to…from time to time,” which raises obvious questions about how the multi-user, clinic-based Base functions. The company claims the system works at moderate ambient temperature ranges (10-30 degrees Celsius/50-86 degrees Fahrenheit), with “a slight loss of precision” outside the range. That could be a deal breaker, but we’re eager to see what a real CE Mark accuracy study shows.

While the prospect of a non-invasive BGM for screening and personal wear is exciting, DiaMonTech still has a long way to go and years of other companies’ non-invasive failures working against it – once-exciting, eventually-bankrupt C8 Medisensors comes to mind as just one example from the past five years. The DiaMonTech website references preclinical tests demonstrating the DMT Base achieves the same accuracy as test strips, but does not provide a study. Co-founder and Head of R&D Prof. Werner Mäntele has authored several publications investigating the ability of infrared light to measure blood glucose levels; however, until we see data from clinical trials in actual people with diabetes in real-world use, we remain skeptical. 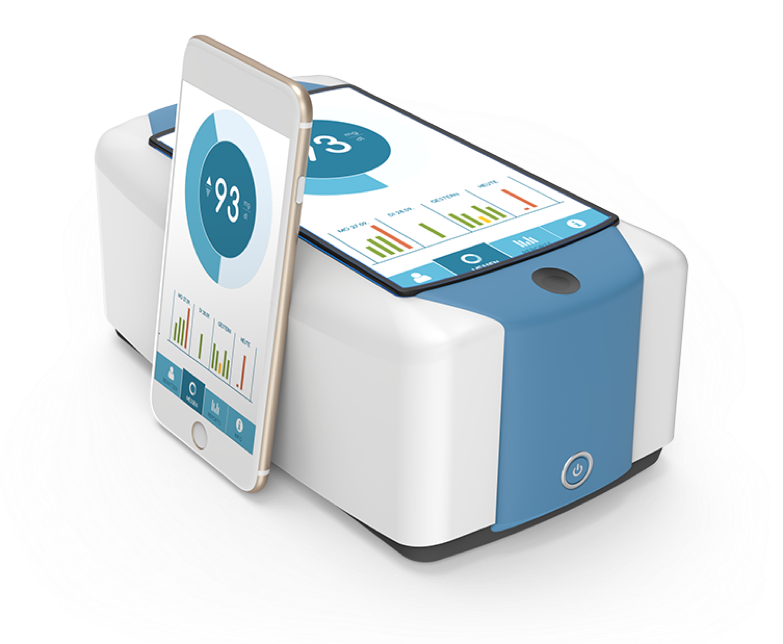