Yesterday, CDC released new NHANES obesity prevalence data for 2011-2014. The data demonstrated that during this time period, the prevalence of obesity was 37% among US adults and 17% among US youth. By sex, the prevalence was higher in women than in men (38% vs. 34%), although no sex difference was seen in youth. With regards to age, middle-aged adults (aged 40-59 years) had the highest prevalence at 40% followed by older adults (aged ≥60 years) and younger adults (aged 20-39 years) at prevalence rates of 37% and 32%, respectively; similar age patterns were shown in both men and women. Notably but unsurprisingly, prevalence varied significantly among racial groups: prevalence was highest in non-Hispanic black adults (48%), followed by Hispanic (43%), non-Hispanic white (35%), and non-Hispanic Asian adults (12%). The overall adult population’s pattern with higher prevalence in women was similar in non-Hispanic black and Hispanic groups. This trend in women is likely driven by physiological factors but also cultural factors, as weight stigma seems to disproportionately affect women.

As for youth data, adolescents (aged 12-19 years) had the highest prevalence at 21% compared to school-aged children (aged 6-11 years) at 18% and preschool-aged children (aged 2-5 years) at 9%, similar in both males and females. By race, the prevalence in non-Hispanic white youth (15%) was lower than in non-Hispanic black (20%) and Hispanic youth (22%), with no significant difference between non-Hispanic blacks and Hispanics. Again, non-Hispanic Asian youth had the lowest prevalence at 9%. In both adults and youth, these differences between whites and minority groups represent key inequities (see recent research on growing disparities in childhood obesity), reminding us of the importance to not solely examine the national average with regards to prevalence. We see the faster growth in prevalence in certain racial groups as a call for interdisciplinary efforts to examine the physiological, cultural, and social determinants affecting these different populations to provide first steps on implementing more targeted screening and prevention efforts – we saw similar findings in the latest diabetes prevalence statistics as well. For more analyses and insights, please see below. 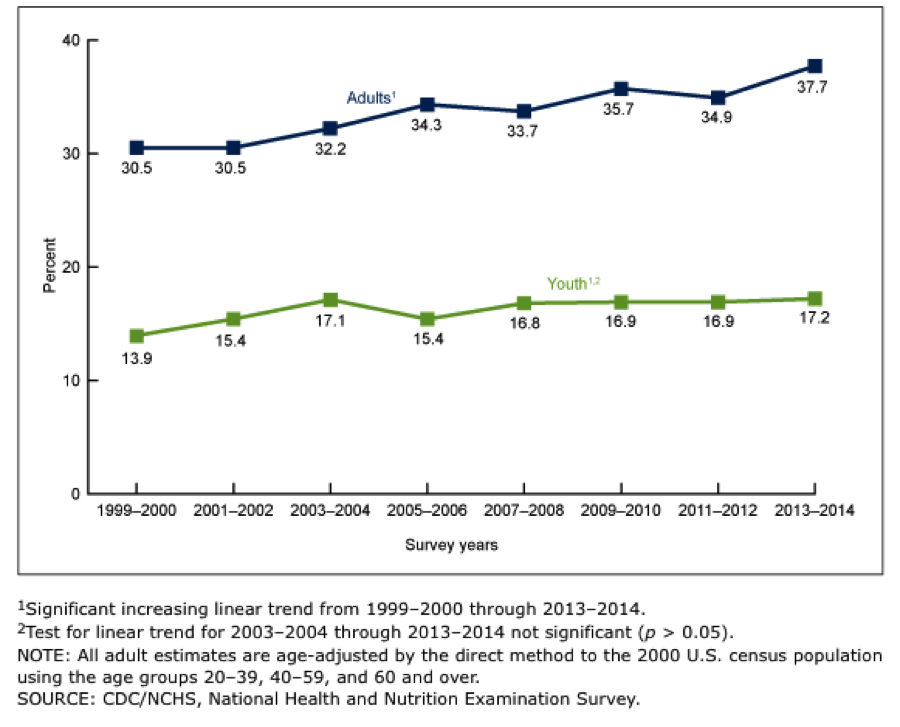 -- by Melissa An, Sarah Odeh, and Kelly Close