Abbott and Bigfoot just announced an exclusive agreement to develop and commercialize a next-gen FreeStyle Libre sensor in Bigfoot’s automated insulin delivery systems for both pumps and MDI auto-titration. The “next-gen” FreeStyle Libre sensor will remain factory calibrated, add a real-time communication technology (we would guess Bluetooth), and maintain the same on-body form factor – see the picture below. The Bigfoot system will keep the same planned smartphone app to engage with the automated system. Wow!

Bigfoot plans to initiate a pivotal trial with the next-gen FreeStyle Libre at sites across the US in 2018. This trial is for the pump-based automated system, as timing on the MDI auto-titration system is still to be discussed with the FDA. We assume pre-pivotal trials are likely, likely a mix of inpatient and outpatient studies (per FDA’s AP guidance). The “2018” pivotal timing is a delay from the “late 2017” prediction shared a month ago (itself a delay from “mid-2017”), which is not a surprise – Bigfoot obviously couldn’t begin a pivotal study without a commercial CGM agreement in place. With this deal, we assume timing will be more predictable. If the pivotal runs on time, a launch seems possible in the ~2019-2020 time frame, though that is our speculation. The Bigfoot team took this ~1-year launch delay very seriously – many team members have a direct T1D connection, so every day matters – but ultimately felt the factory calibrated FreeStyle Libre sensor was worth waiting for.

Abbott is the exclusive sensor partner for Bigfoot’s systems in the US, a massive victory for Abbott and a definite loss for R&D partner Dexcom. For both Bigfoot and Abbott, this partnership brings a lot of synergy – enabling a highly compelling insulin automation service driven by a factory calibrated FreeStyle Libre CGM sensor, leveraging Bigfoot’s smartphone app for the system’s user interface (the pump has no screen), embedding the machine learning algorithms into the hardware (it will remain in closed loop even when the phone is out of range), and using cloud connectivity and remote monitoring to make systems safer. All these advantages correct drawbacks in the MiniMed 670G – e.g., 2-4 calibrations per day, clunkier on-body sensor experience, no smartphone component or cloud connectivity, etc. We’re also elated the companies will help BOTH pumpers and injectors.

Abbott will ship sensors to Bigfoot as a component, and Bigfoot will handle the rest, including PMA submission to FDA, shipping the whole system to consumers, and reimbursement. As planned, Bigfoot will bundle everything into a monthly service that is sold to payers and offered to patients with one prescription and one copay for all supplies. In this model, FreeStyle Libre will be included as part of Class III medical device monthly subscription package also including dose capture devices (Timesulin) and/or a pump, Bigfoot’s app for engaging with the system, consumable supplies, remote monitoring, etc. Payers will have “a fixed and predictable monthly cost, one that will be adjudicated efficiently and will include an at-risk component based on reducing total cost of care across various populations.” We love this model for the consumer – let a single company handle supply management and insurance headaches. Given the enormous patient enthusiasm for both FreeStyle Libre (300,000+ worldwide users) and Bigfoot (60,000+ Facebook likes alone!), we expect there will serious interest in both the devices and the far better business model.

We have long had a hunch that Abbott would add continuous real-time communication with FreeStyle Libre, given CEO Miles White’s frequent comments about extending the platform for many users’ needs. This next-gen news opens up several more questions: What else will be different about the new sensor – e.g., Will wear time remain 14 days, or will it need to be shorter to account for continuous communication (a possible battery life tradeoff)? Will next-gen Libre use Bluetooth or a different communication technology? Will Abbott launch this as a standalone CGM product in the US (with alarms), alongside the Bigfoot insulin automated systems? In the EU? Will pricing be consistent with the current version of FreeStyle Libre? Might this next-gen sensor already be at FDA? – this could explain why the company insists on referring to the device as a “flash glucose monitor” outside of the US and a continuous glucose monitor stateside. Abbott did confirm that this development does not alter the plan for launching FreeStyle Libre in the US, pending FDA approval – it was submitted in 3Q16 for both adjunctive and non-adjunctive indications, and CEO Miles White could only share impatience on the last Abbott call.

Bigfoot, less than three years old at this point, has masterfully strewn together two acquisitions – Asante’s pump two years ago and Timesulin’s Dose Capture device last month – and now this sensor partnership completes a product ecosystem to complement the team’s app/software/algorithm expertise (along with business model and operational innovation). Bigfoot’s goal remains to deliver automated insulin delivery/advice to the masses, and now, it’s all about execution on the trial and regulatory fronts. Last month, when Bigfoot CEO Mr. Jeffrey Brewer told us that his team was aggressively pursuing a strategic relationship with a glucose sensor partner, our minds immediately went to Dexcom – the two inked an R&D development agreement back in June 2015. In speaking to Mr. Brewer (see our interview below), the clear tipping point to go with Abbott was the factory calibration – eliminating a key risk in automated insulin delivery systems.

Our hats go off to both the Bigfoot and Abbott teams for striking such a monumental deal in a “relatively short” period of time. It’s outstanding to see another big/small company partnership that will combine hardware, software, and new business models to correct a serious issue in diabetes – safe and effective insulin dosing. Jeffrey Brewer, Bryan Mazlish, and Lane Desborough began with a dream just a few years ago (see our initial December 2014 coverage and Bigfoot’s debut interview in February 2015), and now have assembled parallel systems for pumpers and injectors and a clear path to market. Abbott CEO Mr. Miles White has also made his company’s unwavering commitment to diabetes and FreeStyle Libre very clear – this is a company that could have thrown in the towel after the Navigator saga in the US, and instead, has built a sensor with over 300,000 global users. It is truly amazing to see a CEO of his caliber put so much effort and heart into the public health problem of our time. We can’t wait for these innovative systems to get into patient hands – the sky’s the limit! 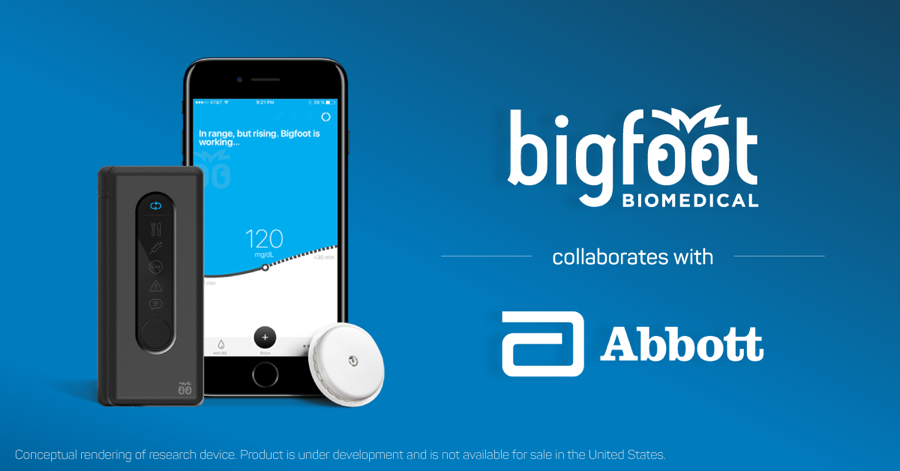 Q: Is the pivotal pushback from “late 2017” to “2018” solely to get the Abbott sensor ready and integrated into the Bigfoot system?

A: The additional time is to align with Abbott’s next-gen timeline and to enhance our design to make best use of Freestyle Libre’s unique and differentiated capabilities.

Q: Are there any regulatory concerns with the FreeStyle Libre factory-calibrated sensor driving insulin automation?

A: We are confident that the use of a factory calibrated sensor in Bigfoot’s automated system will yield a system that can be demonstrated to be safe, effective and easy-to-use. Our hazard analysis and extensive simulations and modeling have identified fingerstick calibration as the biggest risk for an automated insulin delivery system. In the real world, it increases the burden placed on users and is done inconsistently and using poor technique. All closed loop systems that require finger-stick calibration need to accommodate these issues. The use of factory calibrated sensors allows Bigfoot’s systems to avoid these accommodations.

Q: What were the major considerations that went into the decision to go with the Libre sensor?

A: We believe that a factory calibrated sensor will substantially improve our ability to achieve our vision of bringing automated insulin delivery to the broad set of patients and providers who do not currently use technology. Bigfoot’s core mission is to design systems that are simple to use and reduce the burden for patients and the providers that see them. Abbott shares that vision, as evidenced by their differentiated approach to the Freestyle Libre. We believe that Bigfoot’s systems, leveraging Freestyle Libre sensing technology, will fundamentally transform the way diabetes is managed.

Q: What is the expected launch timing - ~2019 for pump+CGM automation and MDI auto-titration?

A: We will be evaluating our commercial timeline based on this new development, working closely with FDA. As a company comprised of so many people directly affected by diabetes, we are impatient and seek to deliver our solutions to market as quickly as possible.

A: The incorporation of Libre requires no change to the basic architecture, nor the industrial design of the pump. The primary user experience will remain on the smartphone. However, we also will continue to leverage our ability to iterate quickly so as to consistently improve upon our user experience.

Q: What about pricing – we assume the subscription model is still proceeding as planned, but does use of Libre enable a lower price?

A: There is no change to our plans for delivering our solutions as a bundled monthly subscription service with a single prescription and one co-pay. The traditional model of a large upfront purchase with a dozen prescriptions for consumables from various distributors and pharmacies that individual patients must manage and track down serves neither patients, nor providers, nor payers. As such, supply chain management is one of the fundamental innovations on which Bigfoot is focused. Our subscription will offer to payers a fixed and predictable monthly cost, one that will be adjudicated efficiently and will include an at-risk component based on reducing total cost of care across various populations.

Q: What about logistics – will Bigfoot handle everything on sales/shipping/reimbursement and Abbott will simply ship to Bigfoot as a component? Or is Abbott’s involvement larger? (e.g., will Abbott market Bigfoot’s system via sales reps?)

A: Bigfoot will bundle everything but the insulin within this system, with Abbott providing Bigfoot with sensors.

Q: Is Bigfoot responsible for the PMA?

A: No change there. Recall that our automated insulin delivery system is reviewed and approved as a “system.” We do not require prior standalone approvals for any of the components.

Q: How fast did this deal happen?

A: This deal is the culmination of a multiyear evaluation of Bigfoot’s options for sensor partners. While Abbott has moved very quickly and fully supported our process, we took the time to make sure Bigfoot would have a partner that shares our values and vision for a world transformed for people with insulin requiring diabetes. This decision on a sensor partner is one of the biggest Bigfoot will make. We had to get it right.

Q: When will Bigfoot’s automated insulin delivery and insulin titration products launch? Does this partnership change timing for launch of the auto-titration system (as of last month, this was expected “possibly in 2019”)?

Q: Will Abbott play a role in the sales, marketing, or other aspects of the Bigfoot launches, aside from just providing sensors?

Q: How much will the two Bigfoot insulin automation services cost on a monthly basis? Will the inclusion of Libre lower previously-projected figures? What will payers think and how will patients/payers tradeoff between the pump vs. MDI versions?

Q: What are the changes introduced in the next generation of FreeStyle Libre? Will it communicate via Bluetooth? Will the wear time change – shorter because of continuous communication or longer because of better technology?

Q: Will the next-gen FreeStyle Libre sensor launch as a standalone product as well?

Q: Who will Abbott partner with next?

Q: Will Bigfoot attempt to enter the EU arena in the near-term? It seems to us that 300,000+ Libre users, and others, might be interested in automating their insulin delivery or having their doses titrated using their current sensor.

Q: How much of a competitive threat is this partnership, particularly for Dexcom and Medtronic?