See more on our top three highlights below, along with Adocia’s expected upcoming milestones. 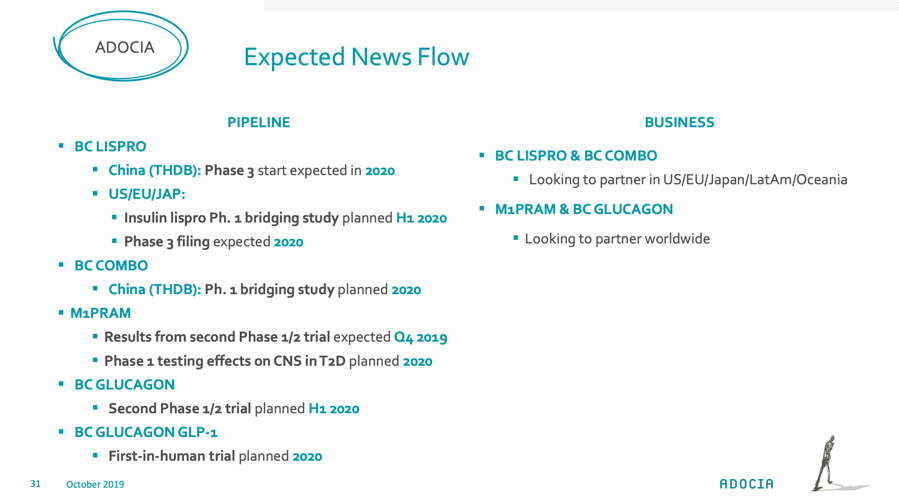 Adocia emphasized M1Pram’s (fka ADO09) proof-of-concept topline results initially announced in April and announced plans to investigate the compound in Alzheimer’s Disease. As a reminder, phase 1 results shared in 1Q19 use of M1Pram conferred a significant 85% decrease in postprandial blood glucose vs. Humalog (p<0.0001) with safety and tolerability. The phase 1b trial was initiated in June 2019, and the primary outcome is the comparison between post-meal glucose profiles after bolus of ADO09 versus Novo Nordisk’s rapid acting insulin NovoLog. All participants will be given standardized mixed meals at the end of a 24-day long multiple daily injection of either compound. As mentioned in 2Q19, results from this second phase 1b trial are expected in 4Q19. No further details were given on its status other than Adocia’s current search for global partners in the venture.

2. Next Steps for BioChaperone Lispro Development Include Phase 3 Filing in the US/EU in 2020, Start of Phase 3 Study in China Slated for 2020

Adocia provided a few updates on the BC Lispro development pipeline, including intended phase 3 trial initiation in China sometime in 2020. Though no update was given on whether Adocia and partner Tonghua Dongbao (THDB) received qualification requirements to begin a phase 3 study in China, the companies have targeted to begin this trial in 2020. They also shared that undisclosed milestones are attached to the study, which makes us wary on when, if in 2020, the trial will initiate – especially following the initial 1Q19 delay announcement. However, Adocia did offer more updates on US/EU trials, stating that a bridging study comparing BC Lispro to Humalog is planned for 1H2020. Adocia is also planning to file a phase 3 application in the US/Eu sometime in 2020, again, without a detailed timeline.

Total cash holdings further jumped to €39 million following the first tranche of a debt financing agreement with IPF partners, penned in October 2019. The first tranche of €7.5 million was subscribed immediately upon signing the deal, and a second tranche of equal value is available to Adocia until December 31, 2019. Notably, dilution is limited to 1.89% of the company’s share capital for each tranche. The first three quarters of 2019 saw $2 million in revenue, mainly due to licensing agreements with Tonghua Dongbao from April 2018 to develop, manufacture, and commercialize BC Lispro and BC Combo in China, Asia, and the Middle East. Financial debt came in at €8 million compared to €7.1 million in 4Q18.

The table below reflects the latest status, as far as we are aware, of Adocia’s diabetes/obesity-related pipeline products. Items highlighted in yellow indicate notable changes to the pipeline in recent months.