After presenting initial results for the landmark DAPA-HF trial at ESC 2019, Dr. John McMurray gave an important follow-up presentation specifically examining the trial’s patient population without diabetes, confirming dapagliflozin’s consistent effects irrespective of type 2 diabetes status. As a reminder, 45% of study participants had known or undiagnosed diabetes (n=2,137), 37% had prediabetes (n=1,750) and 18% had normoglycemia (n=857) at baseline. On the primary composite endpoint, along with all other secondary endpoints, dapagliflozin’s effect was entirely consistent in the two separate subgroups of patients with and without diabetes at baseline (see table below). The robustness of dapagliflozin’s effects could further be seen across a continuous spectrum of baseline A1c levels as well (see slide below). From a regulatory perspective, these robust and consistent results seen in DAPA-HF should support the expansion of Farxiga’s label to treat HFrEF in a wide patient population of patients with and without diabetes – which should make it the first SGLT-2 inhibitor and diabetes drug to garner an indication outside of diabetes population, to our knowledge. 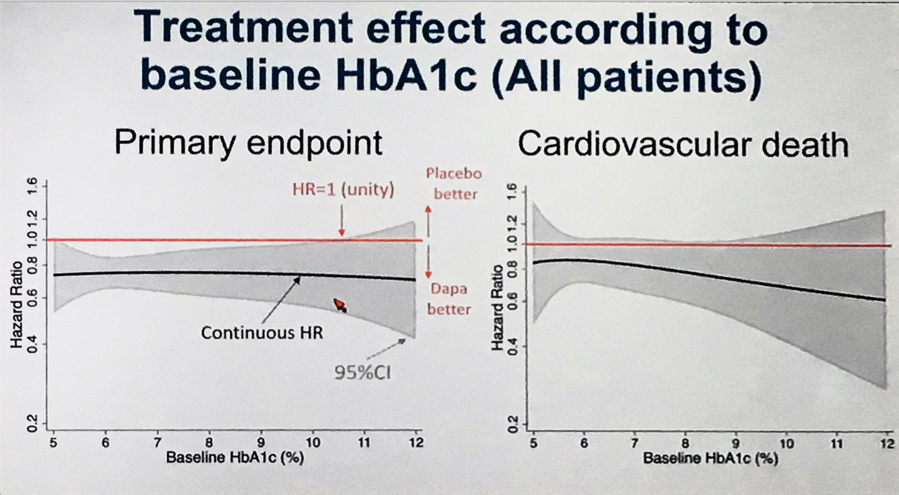 2. Real-World EMPRISE Study for Jardiance Expands to Include Comparison to GLP-1s, Demonstrating Superiority on Heart Failure but Not ASCV Outcomes

The Brigham’s Dr. Elisabetta Patorno presented a new analysis from EMPRISE, Lilly/BI’s ~35,000-patient real-world evidence program on SGLT-2 inhibitor Jardiance, demonstrating a decreased risk of hospitalization for heart failure (HHF) and similar risk of ASCV events with Jardiance when compared to GLP-1s over a mean follow-up of 6.7 months: 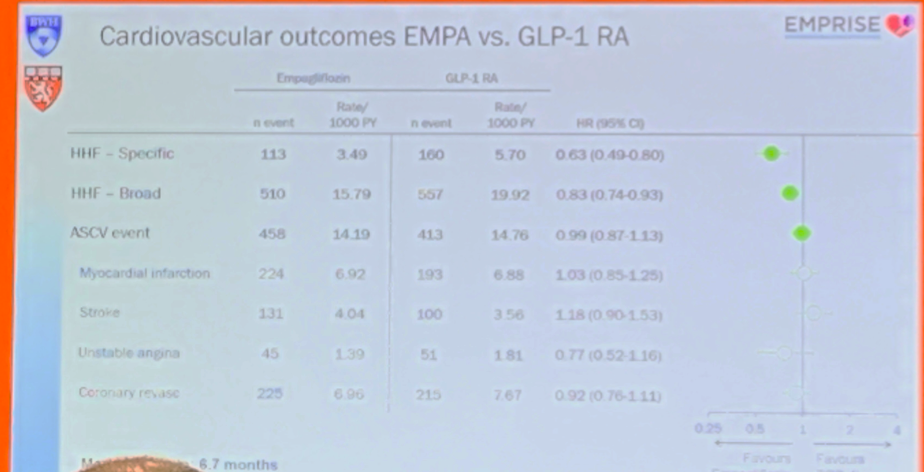 Dr. Patorno also presented an updated comparison of Jardiance to DPP-4 inhibitors, including more events than the analysis we saw at ADA 2019 and a slightly-longer mean follow-up of 5.8 months: 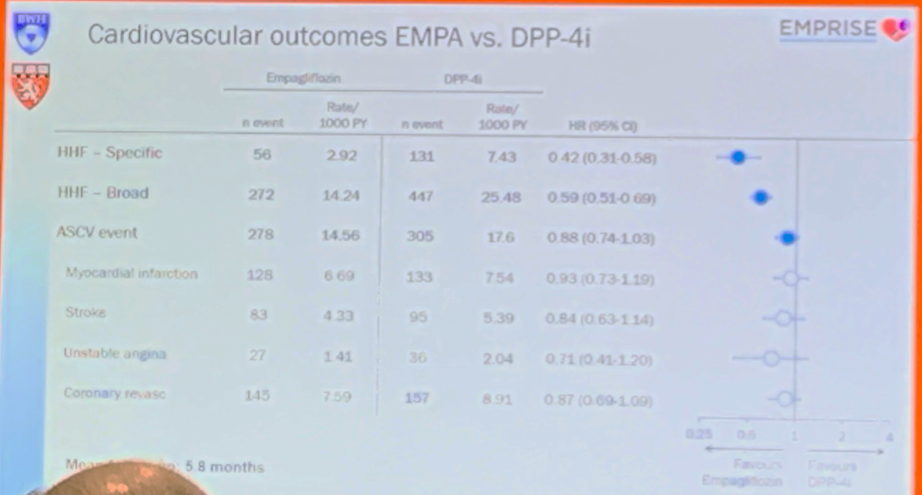 “HHF – specific” refers to a primary discharge diagnosis, while “HHF – broad” refers to any discharge diagnosis; ASCV events include MI, stroke, unstable angina (primary discharge diagnosis), or coronary revascularization. In our assessment and Dr. Patorno’s, these results are well-aligned with the understood clinical profile of SGLT-2s, GLP-1s, and DPP-4s based on an abundance of CVOT data, and they reinforce the emerging importance of SGLT-2s as a key treatment for people with type 2 diabetes and existing or risk for heart failure. Moreover, it’s always encouraging to see the positive effects from clinical trials borne out in the real world, as previous real-world evidence programs – AZ’s CVD-REAL, J&J’s EASEL – have also done. As more events make their way into this analysis, we’ll be interested to see whether Jardiance is associated with a lower risk for an ASCV events. 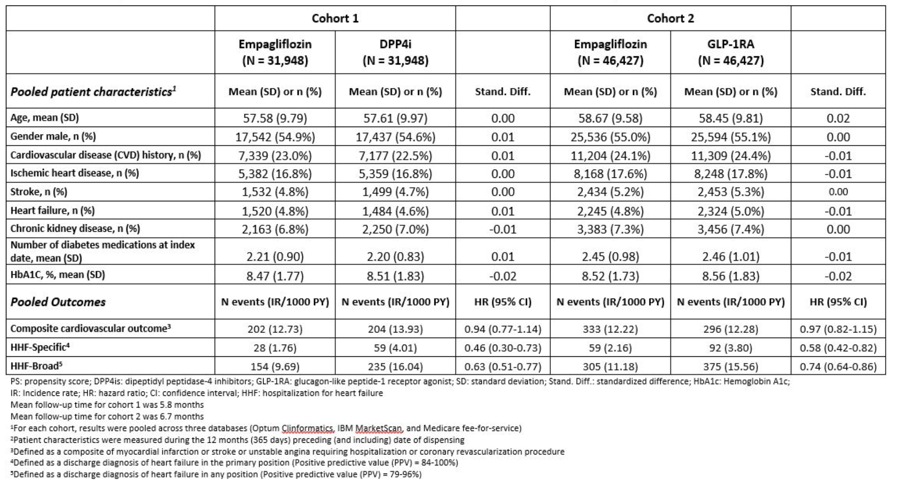 An early-morning media session promoting AHA and ADA’s joint Know Diabetes by Heart initiative, launched at AHA 2018, featured ADA President Elect Dr. Robert Eckel and Brigham cardiologist Dr. Jorge Plutzky in conversation with program Ambassadors Hyvelle Ferguson and Rob Taub. The program centered on the number “two”: While scientists have known for years that type 2 diabetes roughly doubles one’s risk of CVD and stroke, only about half of patients are aware of their increased risk. With this in mind, Know Diabetes by Heart has launched a new campaign to “Give your type 2 a take 2,” calling on patients to dig deeper into their health status. The conversation that followed offered a snapshot of the current zeitgeist surrounding patient engagement, education, and diabetes management at the intersection of type 2 diabetes and cardiovascular health. Perhaps above all else, panelists emphasized the need for better education on and understanding of the link between type 2 diabetes and heart disease. As Dr. Plutzky opened, “When people think diabetes, they think sugar. We want individuals wrestling with diabetes and doctors treating it to be thinking heart disease.” Ms. Ferguson offered her perspective as a “professional patient,” emphasizing that learning about diabetes is a choice every individual has to make and praising ADA and AHA for bringing quality information to an accessible source for patients. And importantly, Dr. Plutzky pointed out, patient understanding is the basis for better diabetes control: Patients have to push through many daily barriers to manage their diabetes well – for example, simply refilling a prescription can be frustrating for a number of reasons. If people living with diabetes better understand what they’re working for and against, he said, they’ll be more likely to stick with their disease management.

Dr. Thomas Zelniker presented results from the first (of presumably many) biomarker studies from the DECLARE-TIMI 58 trial, showing that Farxiga treatment drove greater absolute risk reductions on CV death/hospitalization for heart failure risk in patients with higher baseline NT-proBNP and hsTnT levels. This was a prespecified biomarker analysis of the DECLARE trial. Analysis found that while dapagliflozin treatment consistently reduced relative risk of the CV death/hHF endpoint regardless of baseline biomarker values, a greater absolute risk reduction was seen in the patient population with higher baseline levels of these biomarkers (see slides below). Dr. Zelniker concluded by positing that a combined biomarker approach that integrates NT-proBNP and hsTnT levels may yield important information regarding risk stratification and identification of which patients may benefit the most (in terms of absolute risk reduction) from dapagliflozin treatment. We’ll be curious to see how informative this approach may be in comparison to other risk stratification tools which are not biomarker based – for example, a question that emerged during Q&A was how differentiating this type of assessment may be vs. simply stratifying patients based off of previous heart failure history. At ESC 2019, we saw the presentation of a clinical risk score tool for predicting heart failure risk that inputs five clinical variables: (i) prior heart failure (two points); (ii) atrial fibrillation (one point); (iii) coronary artery disease (one point); (iv) eGFR below 60 (one point); and two points for an UACR >300 or one point for UACR between 30-300. Adding the point values for each of these variables together for each patient gives the patient their individual Risk Score. We wonder how this biomarker data now presented from DECLARE may be integrated to create an even more robust risk stratification and patient identification tool. 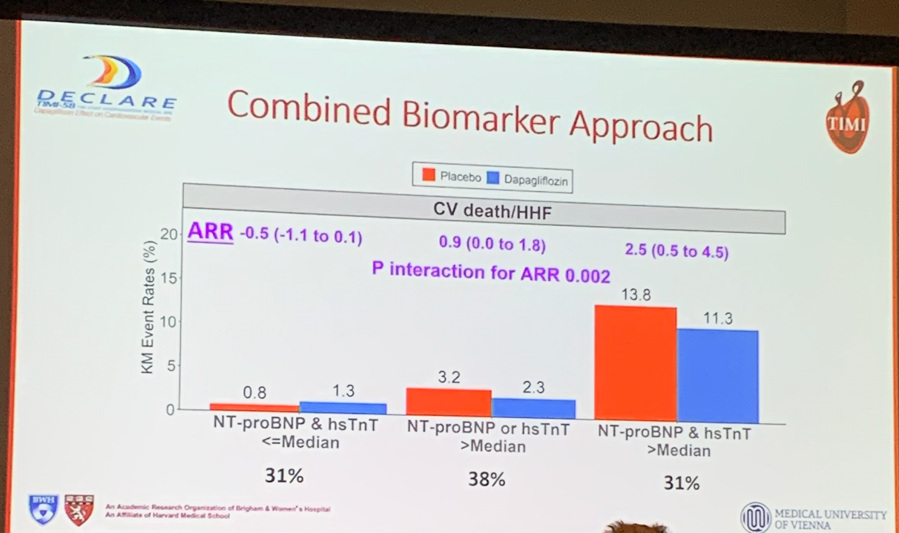 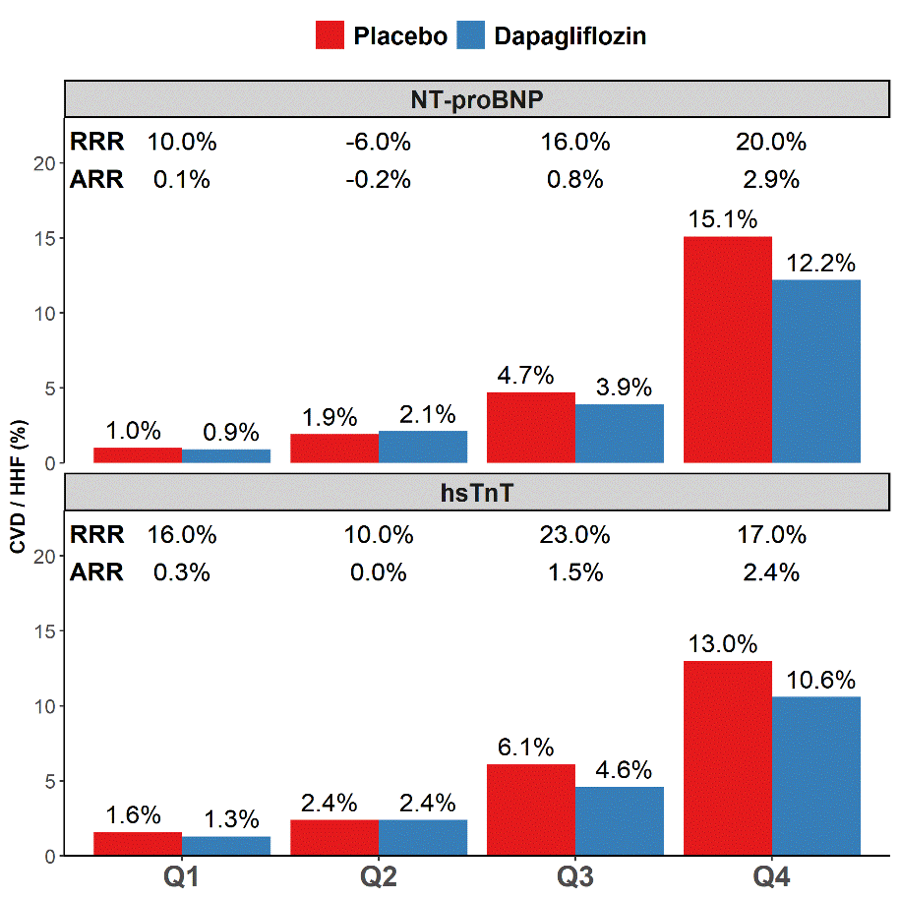 In their 2019 guidelines on primary prevention of cardiovascular disease, ACC/AHA recommend metformin as first-line pharmacotherapy and a GLP-1 or SGLT-2 as second-line for people with type 2 diabetes. Dr. Roger Blumenthal (Johns Hopkins) explained why metformin is a class IIa recommendation while GLP-1s and SGLT-2s are a lower, class IIb recommendation. He acknowledged robust data on the benefits of GLP-1s and SGLT-2s in secondary CV prevention (the LEADER trial for liraglutide, EMPA-REG OUTCOME for empagliflozin, etc.), but noted that evidence on primary CV prevention with these agents was lacking when the new guidelines were published in May. Full results from Lilly’s REWIND trial for GLP-1 agonist Trulicity (dulaglutide) were presented at ADA the following month: Compared to placebo, dulaglutide reduced risk for three-point MACE by 12% (HR=0.88, 95% CI: 0.79-0.99), and pertinent to Dr. Blumenthal’s discussion, this benefit held true for the 69% of participants (n=9,901 total) without pre-existing CVD. This result certainly suggests a cardioprotective benefit to GLP-1s in primary prevention, but Dr. Blumenthal emphasized that 12% relative risk reduction is “not a huge margin” and that this therapy class may not be cost-effective in a lower-risk population. We appreciate the importance of cost considerations in designing clinical guidelines, so that doctors can actually implement the recommendations for their real-world patients, many of whom are cost-constrained. Dr. Blumenthal captured this point well: “In Maryland at least, it’s very challenging to secure insurance coverage when we prescribe these newer diabetes medications.” That said, we think the science is there to support a meaningful primary prevention benefit to GLP-1 agonist treatment; lowering someone’s risk for a heart attack or stroke by 12% is nothing to scoff at, and we have to move the needle on CVD in diabetes however is possible. Mechanistically, there’s wide consensus among diabetes thought leaders that GLP-1s exert an anti-atherosclerotic effect, which would apply to patients whether or not they’ve had a prior CV event, though of course the magnitude of benefit is greater for sicker individuals (those with CVD and longer duration of diabetes). Longer-term data on use of these advanced agents could reveal cost-effectiveness in primary prevention. We sincerely hope that HCPs at least consider a GLP-1 agonist or SGLT-2 inhibitor for all patients with type 2 diabetes – there is so much room for these products to help more patients obtain better glycemic control and avoid devastating CV events. DECLARE was not mentioned during this talk, but we’d add that AZ’s SGLT-2 inhibitor Farxiga (dapagliflozin) showed significant reduction in hospitalization for heart failure/CV death in a primary prevention diabetes population (HR=0.83, 95% CI: 0.71-0.98). 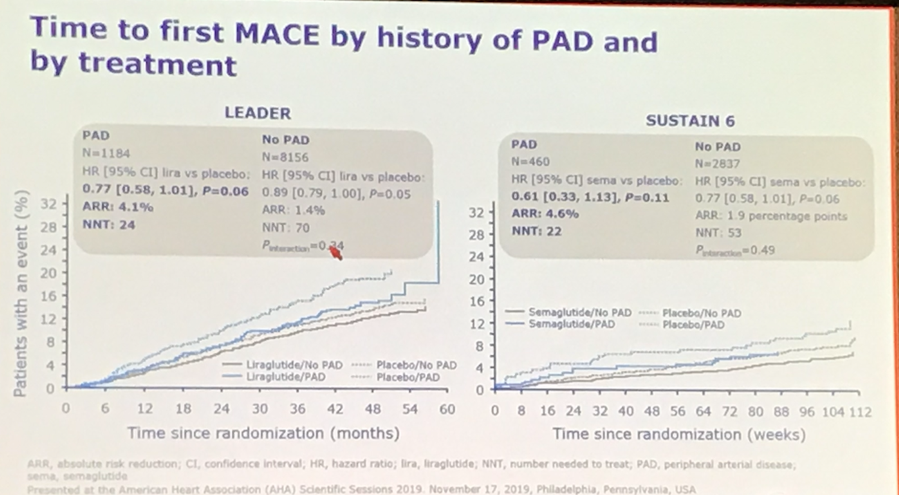 Northwestern’s Dr. Clyde Yancy argued that new data on SGLT-2 inhibitors should alter best practices for treating heart failure. He focused on DAPA-HF, AZ’s trial investigating Farxiga (dapagliflozin) in patients with chronic heart failure, with or without diabetes. Farxiga lowered risk for the primary endpoint of CV death/hospitalization for heart failure/urgent heart failure visit by 26% vs. placebo (HR=0.74, 95% CI: 0.65-0.85, p=0.00001). Dr. Yancy was especially impressed by the low number needed to treat (NNT) – only 21. He additionally emphasized that Farxiga is a once-daily pill requiring no titration; in other words, it’s easy for patients to take and for HCPs to prescribe, making it a no-brainer that this SGLT-2 inhibitor should be incorporated into the recommended approach to heart failure. Dr. Yancy also mentioned that Lilly/BI’s EMPEROR-Reduced trial of Jardiance (empagliflozin) is forthcoming, expected to complete in June 2020. This readout will provide more evidence on how SGLT-2s could play a role in heart failure treatment outside the context of type 2 diabetes. All signs point to heart failure benefit as a class effect of SGLT-2 inhibitors, and we look very forward to EMPEROR results. (Of note, Lilly/BI’s EMPEROR-Preserved trial is expected to complete around the same time, and will provide the first RCT data on an SGLT-2 in heart failure with preserved ejection fraction.)

Dr. William Weintraub presented results from a cost-effectiveness analysis of Amarin’s Vascepa (icosapent ethyl) which found the therapy to be cost-effective at its price point of $4.16/day. The model used incorporated results from the REDUCE-IT trial to determine lifetime health benefits, health care costs, and cost-effectiveness of Vascepa vs. placebo. With these inputs, the model predicts QALYs over patients’ lifetimes of 11.61 and 11.35 for Vascepa and placebo, respectively. Notably, over 85% of the model’s simulations showed that Vascepa would be cost-effective (defined as <$50,000/QALY gained) at $4.16/day.

Dr. Felipe Martinez presented an analysis of DAPA-HF by age showing that treatment effects in terms of relative risk reductions were consistent irrespective of age, with greater absolute risk reductions in older patients because of higher baseline risk in this population. When binned by age groups (<55 years, 55-64 years, 65-74 years, and >75 years), dapagliflozin treatment showed consistent relative risk reductions on the primary outcome of CV death/hHF/urgent HF visit. Similar consistent effects were seen when age was treated as a continuous variable as well (see slides below). Regarding safety, renal serious adverse events were higher in older patients in the placebo group, but with a lower numerical number of events in these same patients treated with dapagliflozin, hinting at a potential benefit. Other safety events were also consistent across age, even in elderly patients – a highly reassuring sign, given the burden of polypharmacy in this patient population. Importantly, these results should support Farxiga’s use in a wider patient population with HFrEF regardless of age. These results were also simultaneously published in Circulation. 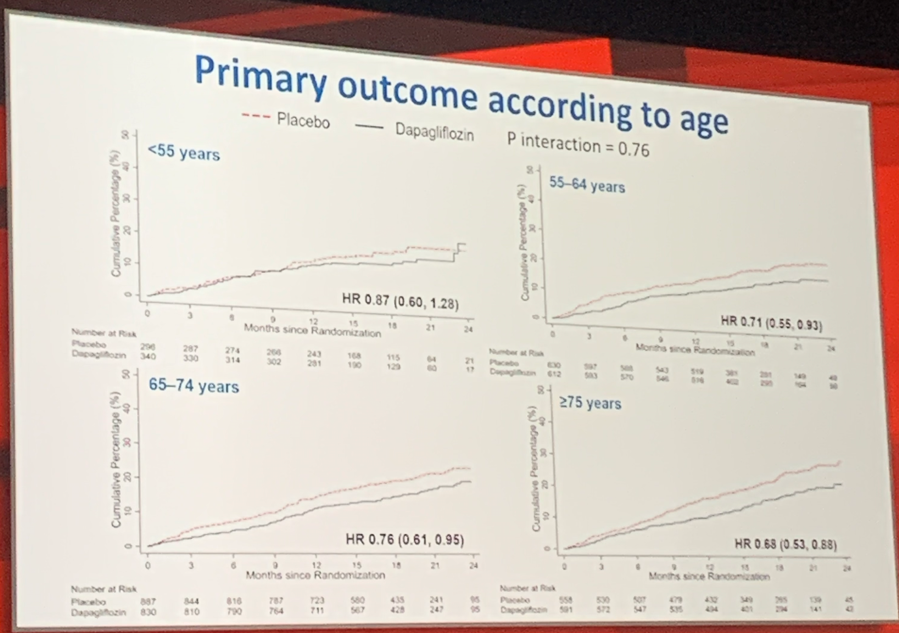 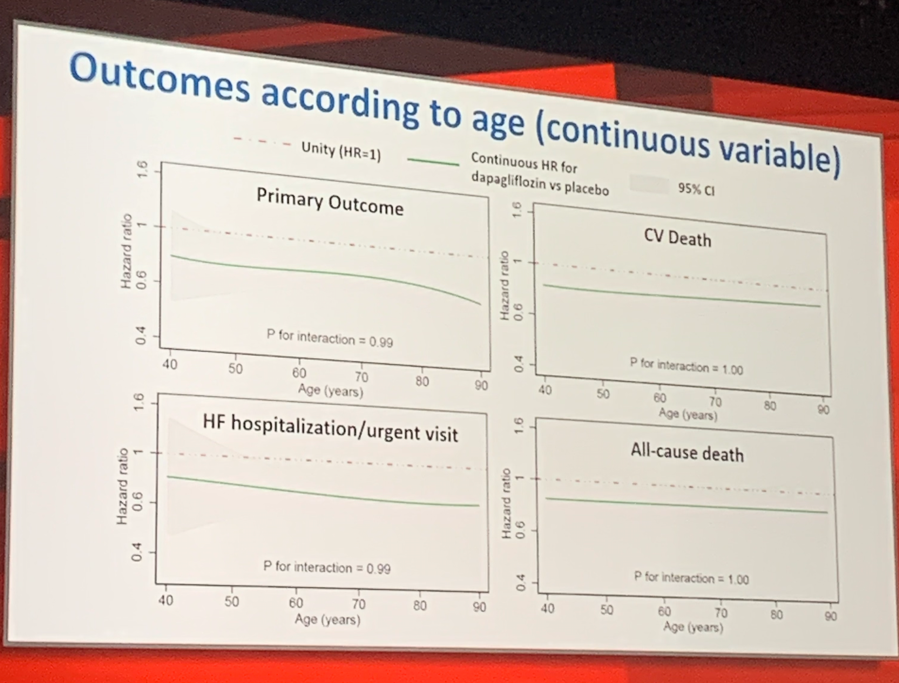