Ypsomed reported F1H18 results on Thursday in a call led by CEO Mr. Simon Michel and CFO Mr. Niklaus Ramseier. Given Insulet’s termination of the Omnipod distribution agreement with Ypsomed (starting July 1, 2018), the call focused primarily on how Ypsomed’s own ambitious diabetes care pipeline will serve to fill the significant revenue gap and corresponding growth. Read on for our top highlights from the call – view the press release, slide deck, and semiannual report here.

Overall Ypsomed sales hit a record-high CHF 213.4 million ($213 million), increasing 15% YOY on a tough comparison to F1H17, when revenue increased 18% YOY. Management noted that this performance was “clearly above our own expectations.” Growth was driven by Diabetes Care sales, which climbed a strong 25% YOY to CHF 141.9 million on a tough comparison to F1H17, when revenue increased 23% YOY. Omnipod sales of $80 million CHF comprised a notable 56% of Diabetes Care revenue and drove ~80% of the segments growth in the half year. The semiannual report cited strong sales in both established and newly exploited markets, particularly France – of course, that’s exactly where Omnipod has seen strong momentum recently, per Insulet 3Q17. Delivery Systems revenue declined 2% YOY to CHF 62.7 million against a tough comparison to F1H17, when sales climbed 12% YOY. The semiannual report noted GSK’s removal of its GLP-1 product Tanzeum from the market as a key factor in softening sales. However, Ypsomed expects renewed growth in F2H17 given current order volumes.

2. Termination of Omnipod Agreement -> CHF 160+ Million Revenue Reduction; “We Will Focus On Our Own Products”

Omnipod sales were a strong 80 million CHF ($80 million) in F1H18, driving a striking ~80% of Ypsomed’s Diabetes Care growth and half of Ypsomed’s EBIT profitability. Though Ypsomed did not share Omnipod sales one year ago, we estimate they grew ~40% YOY based on this call’s provided share of growth (80% of Ypsomed Diabetes Care’s YOY growth of 28.5 million CHF). Management expects continued strong Omnipod sales of CHF 85 million in the second half of FY18, good news for Insulet – there was obviously concern Ypsomed might shuttle patients to its own pump in the coming ~9 months, but the agreement incentives seem well designed to avoid this (see below). 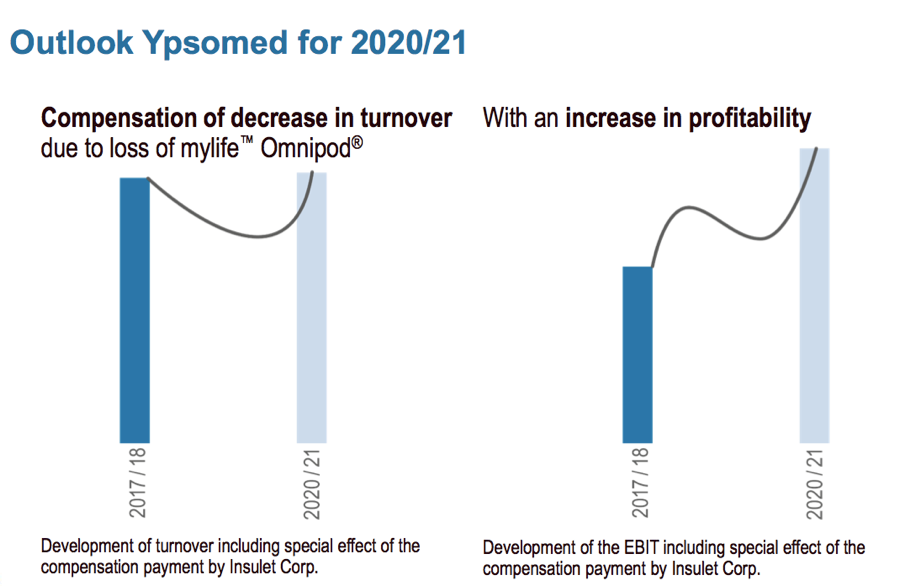 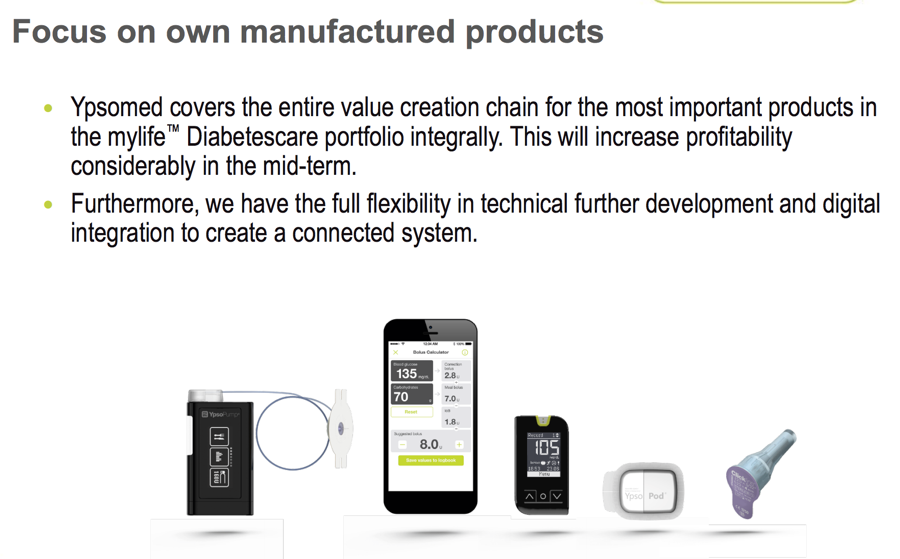 The mylife touchscreen durable YpsoPump is currently available in six countries, with four more by year end and ten expected in 2018. So far, the YpsoPump has achieved a “very excellent, smooth launch,” with positive feedback from both patients and providers. No user base or launch metrics were shared, so we assume it’s still in the hundreds or perhaps low thousands (our speculation). The updated 1.5 version of the YpsoPump software has just begun roll out. In addition to the prefilled NovoRapid pump cartridge, users can now manually fill a cartridge with the insulin of their choice, allowing the YpsoPump t0 be used with every fast-acting insulin – great to see this launching on time. According to the semiannual report, Ypsomed will offer more prefilled cartridges “in the next few years” – this could imply Lilly also has a prefilled pump cartridge coming for Humalog, though we’re not sure. The pump has a quick half-hour training phase (management noted Medtronic’s one-day training period for 670G) claiming that nurses love the device’s reduced training burden. We do not believe continuous pump communication with the mylife smartphone app (via Bluetooth) has launched; this was previously expected in FY18, though the report showed this in the “product portfolio of the future.” If it has launched, YpsoPump would be the first pump on the market to send data continuously to a user’s smartphone (excluding the MiniMed Connect keychain uploader) – a terrific win for patients to check pump status without having to pull out the pump. This embedded Bluetooth should  also integrate nicely into JDRF’s open protocol initiative, as well as DIY efforts.

In March-April of next year, Ypsomed plans to introduce the new mylife Unio Neva BGM, which will link to the mylife App via Bluetooth. Next steps include integrating CGM into the app in 2018 (management cited ongoing discussions with Dexcom and Abbott) and developing a mylife Control App to enable remote bolusing in 2019. Mr. Michel sees the Control App as critical to designing a closed loop system, which the company plans to test with the YpsoPump in a pivotal trial in 2019. Ypsomed is currently “evaluating several algorithms,” although Mr. Michel noted that there are “not so many good ones.” This timeline seems fairly doable assuming execution is strong, but things need to fall into place quite quickly – given how long it has taken the 670G to launch and other companies to get their design/pivotal timing lined up.

5. Ypsomed Orbit Infusion set to Be Included in Bigfoot Pivotal Trial in 2018; Scaling Up of Orbit Manufacturing

In a brief mention during the call, Ypsomed acknowledged that the Orbit 360-degree infusion set will be included in the Bigfoot-Abbott pivotal trial slated for 2018. At this stage, it’s just a supply agreement for the pivotal, though Mr. Michel implied it’s a bit more: “[Bigfoot] is extremely innovative, but they still have a long way to go. If they are successful by 2020-2021 we’ll definitely be in the game with our infusion set.” (That latter comment implied a commercial deal, which it is not.)

Ypsomed’s semiannual report highlighted the company’s SmartPilot, an attachable device equipped with sensors that clips onto the YpsoMate autoinjector. The SmartPilot wirelessly connects to an app, records the handling steps of the user, and provides step by step instructions along with audible and visual feedback when an injection is successfully completed or if the user makes a mistake. The app includes a reminder feature, and dose data can be sent to providers via the cloud. SmartPilot is intended for use in clinical studies and is compatible with the YpsoMate platforms for both 1 ml and 2.25 ml syringes. It’s unclear when the SmartPilot is expected to launch, but we’re fans of the tool and think it has the potential to be a huge asset for the GLP-1 class, in particular. YpsoMate 2.25 (large-volume auto-injector) and YpsoDose (prefilled, large-volume patch injector) are also in development, as noted in the company’s slide deck, although no details on timing were shared. 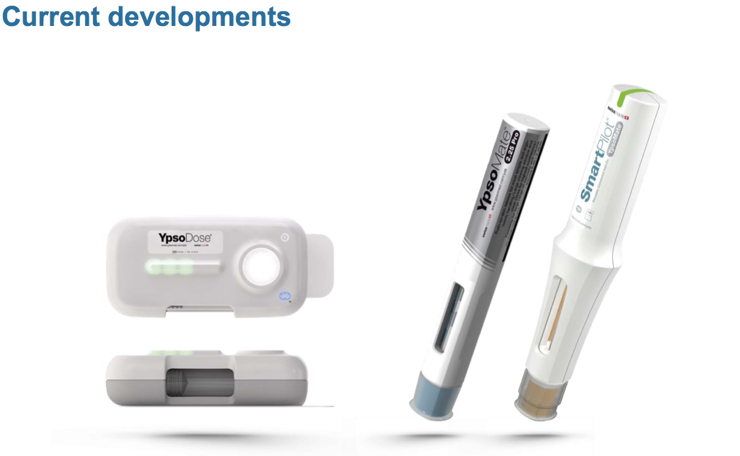