Cellnovo shipped just 71 pumps in 2Q18, up 20% YOY and marking two straight quarters of consecutive YOY increases. Pump shipments declined 15% sequentially, however, from a base of 84 pumps in 1Q18.

In June, Cellnovo finally announced the start of large-scale manufacturing of insulin cartridges with Flex – this has been a long time coming, as the initial hope was to finalize the transition by the end of 2016. Per the press release, Flex manufacturing will enable a 12-fold increase in annual insulin cartridge production. A second production line in Romania is slated for completion in 1H19. Now the big question is how much revenue and shipments will ramp with manufacturing unconstrained – How much demand is out there? What patients will choose Cellnovo over Insulet, Medtronic, Roche, Ypsomed, and soon-to-launch Tandem?

The company ended the quarter with €4.5 million (~$5.4 million) in cash, reflecting a hefty €5.0 million cash burn from 1Q18. That would leave less than one quarter of cash at the Q2 burn rate; however, Cellnovo announced the finalization of a €20 million (~$24 million) financing agreement with Kreos Capital, consisting of a €17 million (~$20 million) loan to be granted in three tranches and a €3 million (~$4 million) convertible bond financing to be issued by Cellnovo in three tranches. A first tranche of €9 million (~$11 million) of the loan and €1 million (~$1 million) of convertible bonds will be issued “in the coming days.” The loan will be used to fund Cellnovo’s capital expenditures, operating expenses, and working capital requirements, as well as to refinance an existing loan between Kreos and Cellnovo. 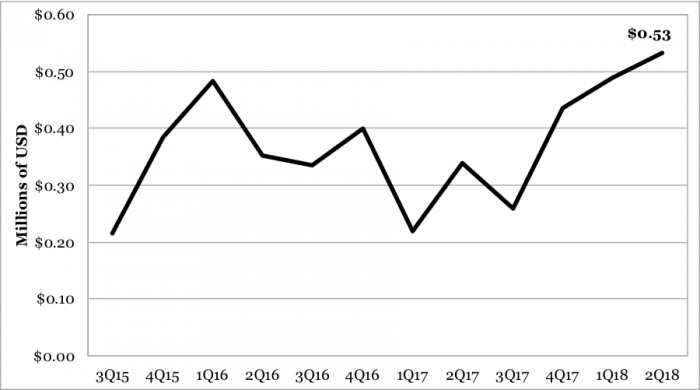