Tandem reported 3Q18 record global sales of $46 million (GAAP), rising 71% YOY on a fairly easy comparison (for Tandem) to 15% YOY growth in 3Q17. This marks Tandem’s largest YOY growth reported in four years, when sales climbed 76% YOY in 4Q14. Notably, 3Q18 revenue even surpassed management’s estimate for sales of $42-$44 million shared at the Analyst Meeting in September (+$2 million on the high end). Sequentially, sales climbed an impressive 36% from a high base of $34 million in 2Q18 (at the time, that was Tandem’s second-best sales ever). As expected, pump sales of $31 million were the lion’s share of revenue (67%), followed by infusion sets (23%), and cartridges (10%). Year-to-date sales of $108 million reflect robust 60% YOY growth following a tough first three quarters in 2017 for Tandem. CEO Mr. Kim Blickenstaff noted strong worldwide demand for the t:slim X2 and asserted that the Basal-IQ launch “aligned perfectly” with AADE. 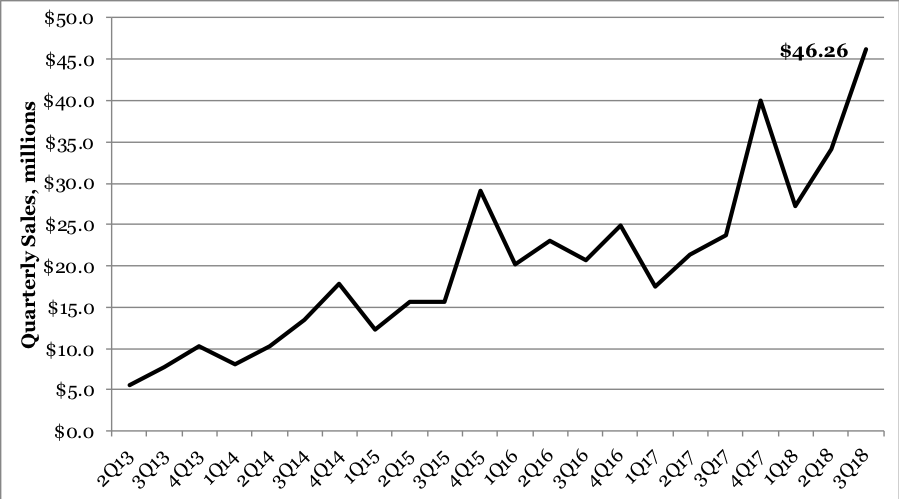 Tandem shipped a record 8,434 pumps in 3Q18, up 118% YOY (the largest YOY increase in pump shipments since +185% YOY reported in 4Q13) and increasing 55% sequentially from a high base of 5,447 pumps shipped in 2Q18. Q3 pump shipments included a whopping 1,055 pumps shipped internationally (huge pent-up demand, it seems), with the remaining 7,379 pumps shipped in the US. As CEO Ms. Leigh Vosseller pointed out, this brings year-to-date US shipments to 18,325, already surpassing full-year 2017 pump shipments by 7%. More than 70,000 pumps have been shipped in the US over the last four years, representing a “reasonable estimate” for Tandem’s in-warranty installed base, according to Ms. Vosseller. Of course, many use their pumps beyond four years, meaning the total number of Tandem users is probably higher than that. 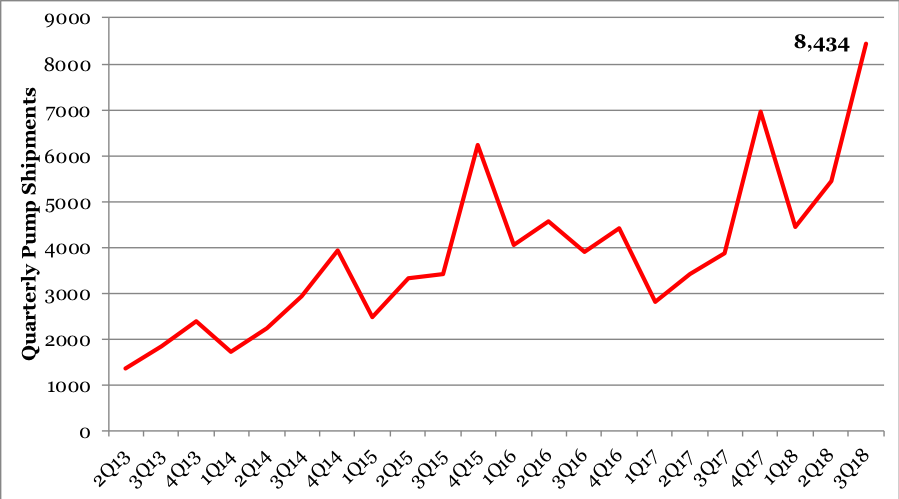 Management raised 2018 guidance to $160-$165 million (+49%-53% YOY), up from $150-$158 million (+39%-47% YOY) anticipated in September. To meet this guidance, Tandem would have to see sequential growth of just 13%-24%, which, given that Q4 is historically Tandem’s strongest seasonal quarter, seems doable. However, as Ms. Vosseller stipulated during Q&A, with Basal-IQ shipments starting in Q3, Tandem saw higher-than-usual sequential growth; it is possible that the “pump season” may have begun early, potentially softening the typically robust Q4 sequential increase. For context, 2017 saw 69% sequential growth between Q3 and Q4, and though the former was a softer quarter, this makes 2018’s Q3/Q4 gain seem quite doable. According to Ms. Vosseller, Tandem has increased annual guidance due to “extraordinary strength” in renewal opportunities, sales of supplies (totaling $15 million in 3Q18, up 67% YOY), and conversions from Animas users. “Better than expected” sales from the Basal-IQ launch also contributed to the increased guidance.

Tandem ended the quarter with $114 million in cash, reflecting the net impact from $109 million in net proceeds from the company’s equity financing completed in August to fully repay Tandem’s term loan agreement. Excluding these transactions, Tandem used just $4.5 million in cash in 3Q18, a remarkably low amount and considerable decline relative to $19 million used in 3Q17. Per Ms. Vosseller’s prepared remarks, Tandem is aiming for cash flow breakeven and a 55% gross margin by 4Q19 – a more specific and bit later timeline than the previously expected “2H19.” To hit these goals, Ms. Vosseller expects Tandem’s installed base may reach 80,000 customers earlier than 2H19, leaving some room for the full base to be consistently ordering supplies by 4Q19. The installed base number should be doable with Basal-IQ and Control-IQ and OUS expansion; a bigger question is whether gross margins can rise eight percentage points within a year from the current 47% level.

Mr. Blickenstaff shared that Basal-IQ has been offered to the >30,000 t:slim X2 customers and that 6,500 patients have already obtained a prescription, completed the requisite online training, and updated the X2 software to include Basal-IQ with Dexcom G6 integration. He claimed to be “extremely happy” with the product launch and noted that feedback from users has been “overwhelmingly positive.” In fact, Mr. Blickenstaff shared that “many describe the product as life changing.” Clinicians at AADE were particularly struck by the feature’s simplicity, especially that there is only one new screen used to run Basal-IQ. We too have heard good things about Basal-IQ; see Will Dubois’ review here, a highly-regarded patient leader at DiabetesMine. We also believe rollout of Dexcom’s G6 is probably a gating factor for Basal-IQ; many t:slim X2/G5 users are probably waiting to move to G6 before upgrading to Basal-IQ. We imagine many patients have sensors to work through, and Dexcom does have some order delays for G6.

Mr. Blickenstaff was very optimistic regarding the international launch of t:slim X2 with G5 integration, highlighting Health Canada’s recent approval in October. He noted that the direct sales and clinical organizations in Canada are staffed and trained. The next step, according to Ms. Vosseller, is to obtain reimbursement in each of the provinces. Tandem expects to begin shipping pumps by the end of this year, in line with timing from the October press release though leaving some ambiguity as to the cadence of when sales will materialize – Q4 or mostly Q1? More broadly, Mr. Blickenstaff noted that Tandem has been “working through various pre-launch activities” in “select geographies” and expects these efforts will continue to scale over the next year. Still, he emphasized that Tandem is “already seeing early indications of high demand.” At Tandem’s Analyst Day, management listed France, Germany, and the Netherlands as the next international targets for Tandem. No updates were provided on entry into these markets on today’s call.

Tandem submitted the t:slim X2 to the FDA as the first interoperable/integrated “iPump” in October, aligning with expectations from September’s Analyst Day. Tandem has been working with the FDA to establish the special controls for the iPump indication, which will be highly important for the field. COO Mr. John Sheridan did not provide much detail as to what those special controls might look like; obviously, these are especially important for other pumps, depending on how high the bar is and what is required to be an iPump. Mr. Sheridan emphasized that the interoperable designation does not mean that elements of an interoperable AID system can automatically be used together (i.e., like buying Bose headphones and using them with your Apple computer and Android phone). Rather, the involved organizations must have formal agreements to define product support, complaint reporting and resolution, and financial terms – for instance, Tidepool cannot just integrate the t:slim X2 into Tidepool Loop without first working with Tandem. (Insulet is the first Tidepool Loop partner, announced on its 3Q18 call today.) Mr. Sheridan explained that Tandem plans to follow the iPump submission with a separate PMA for Control-IQ “as soon as the clinical data is available” next year. The Control-IQ iDCL pivotal trial is now fully enrolled, with completion expected in spring 2019. Tandem still expects to meet its goal of launching Control-IQ in summer 2019; it’s again ambitious timing, but Basal-IQ did launch on time and we assume Control-IQ could go fast with FDA.

During Q&A, Mr. Sheridan reiterated the expected 2020 launch for Tandem’s miniaturized pump, t:sport. He noted that the team is fully staffed and “working aggressively” towards bringing the product to market. Tandem plans to submit the t:sport as an iPump with Control-IQ, leveraging the path noted above and eliminating the need for a clinical study. Rather than submitting a whole new PMA, Tandem will only need to demonstrate that t:sport meets the specifications for an iPump in order to integrate it with Control-IQ, demonstrating the degree to which FDA’s new interoperable pathways should dramatically accelerate innovation and reduce burden for everyone (especially companies and FDA). As Mr. Sheridan noted in his prepared remarks: “the FDA's interoperability initiative is evidence that the agency recognizes that the pace of technology is accelerating and they support bringing new products to market in a more rapid pace.” In line with expectations shared at Tandem’s Analyst Day, Mr. Sheridan confirmed that t:sport will launch with smartphone control, noting that “it’s something that we’ve talked to the FDA about, and they’ve been very encouraging.” For more on t:sport read our coverage from Tandem’s Analyst Day here.

During Q&A, Mr. Sheridan confirmed that Tandem is “working on” a paired t:slim X2 smartphone app (secondary display), slated for availability in “early 2019.” It was unclear if this was a delay from September’s expectation, which expected a “beta launch” by the end of 2018 and broader availability in 2019. Following launch of the paired secondary display app (Tandem’s “first priority”) Mr. Sheridan said that Tandem is “definitely” going to “immediately jump” to smartphone control – keeping pace with Insulet’s own plans announced on its 3Q18 call today. At Tandem’s Analyst Day, management expected smartphone control will come for the t:slim X2 before t:sport launches, implying a launch of smartphone pump control could happen in 2H20 or even sooner. (Insulet expects Horizon to launch with smartphone control, also in 2H20.) Per commentary from Tandem’s Analyst Day, Tandem hopes to eventually add many features to the t:slim X2 app: Apple Health app integration; biometric authentication (presumably a fingerprint or Face ID for a bolus); integration with diet, sleep, and exercise information; decision support; and smartwatch integration.