Sanofi provided its 4Q15 update yesterday in a call led by CEO Mr. Olivier Brandicourt. Total sales for the company’s diabetes portfolio in 4Q15 were €1.9 billion (~$2.1 billion), falling 13% year over year (YOY) in constant currencies (down 6% as reported) and rising 3% sequentially. Overall 2015 sales totaled €7.6 billion (~$8.4 billion), down 7% operationally (up 4% as reported) from 2014. Management characterized the decline as expected and in line with guidance from Sanofi’s 3Q15 update. The slower performance of the overall diabetes portfolio was driven by declines in US diabetes sales revenue, particularly for its largest-selling product Lantus (insulin glargine) – presumably most of this was driven by price. Lantus sales fell 20% YOY in constant currencies (down 13% as reported) at €1.5 billion (~$1.6 billion). This was the most challenging quarter in terms of growth for both Lantus and Sanofi’s diabetes portfolio as a whole since we began tracking the company’s sales over a dozen years ago, in 2002.

On the more positive side from a growth perspective, albeit from a much smaller base, new insulin Toujeo (U300 insulin glargine) sales doubled sequentially in 4Q15, reaching €98 million (~$108 million) – sales tripled internationally. Full year sales totaled €164 million (~$182 million). Sanofi management highlighted the impressive formulary access achieved by its PCSK9 inhibitor Praluent (alirocumab), although this only netted €5 million (~$6 million) in sales in 4Q15 and €9 million (~$10 million) in sales for all of 2015, which seemed on the lower side but we remember that bigger sales won’t happen til the CVOT results are due. On the pipeline front, Sanofi confirmed that LixiLan (lixisenatide/insulin glargine) will be submitted in the EU in 1Q16 and that an FDA decision is expected in 3Q16. The company has also added a new stable glucagon candidate (SAR438544) to its phase 1 pipeline. 50% interim analyses for Praluent’s (alirocumab) ODYSSEY cardiovascular outcomes trial is expected in the first half of 2015 and 75% analyses is expected in the second half of 2015, with full completion expected in 2017.

Read on below for a product-by-product overview of the update and a look at industry-wide trends in the GLP-1 agonist, basal insulin, and rapid-acting insulin markets, followed by a transcript of all diabetes-related Q&A. 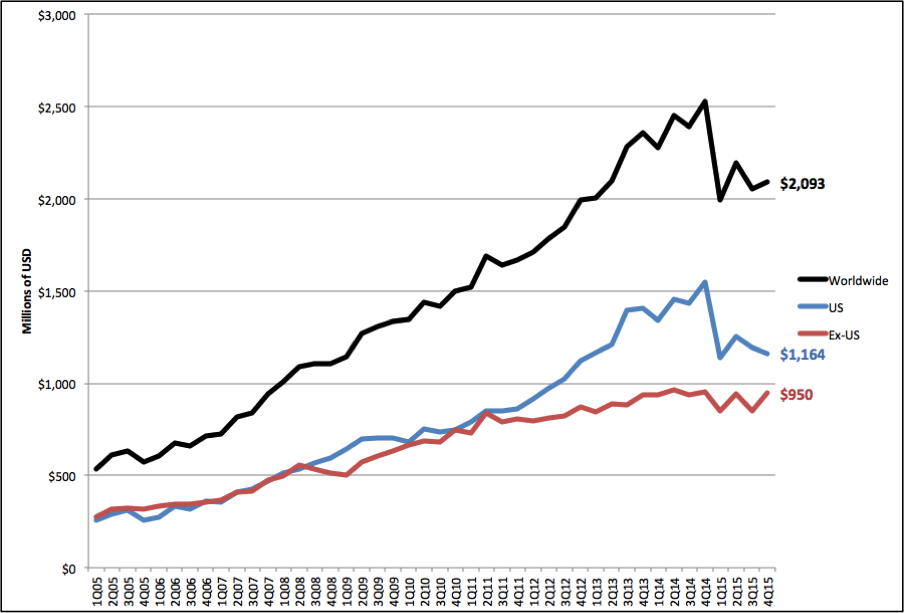 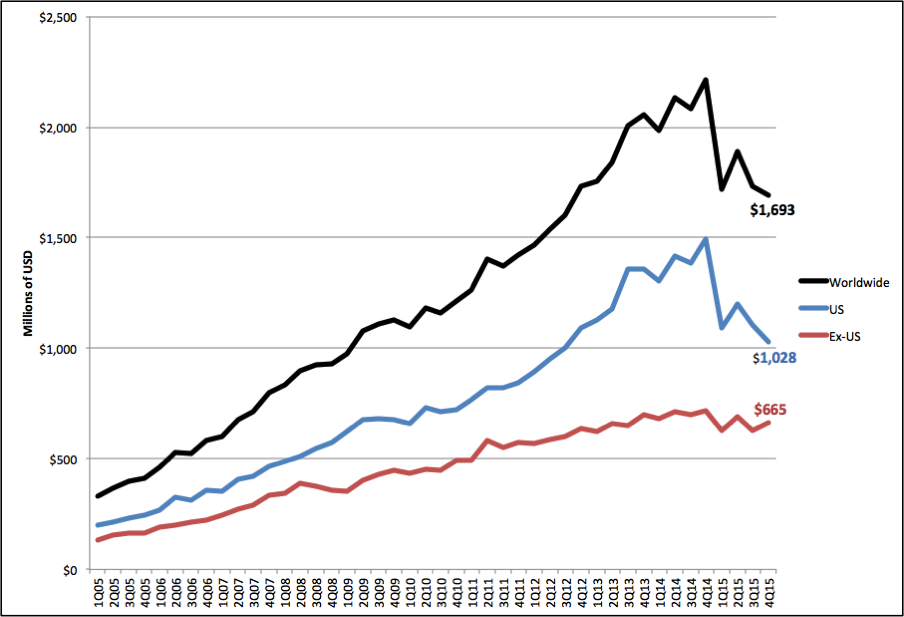 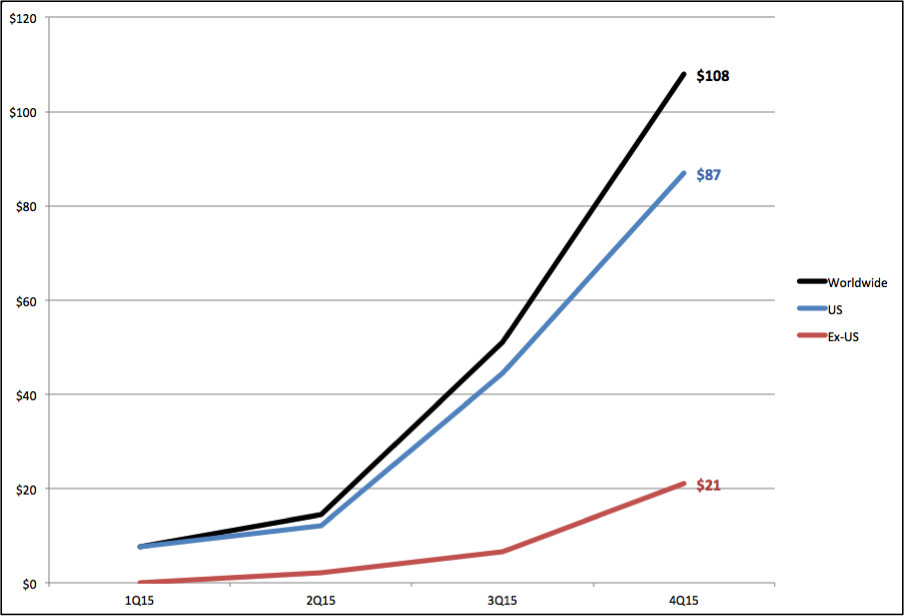 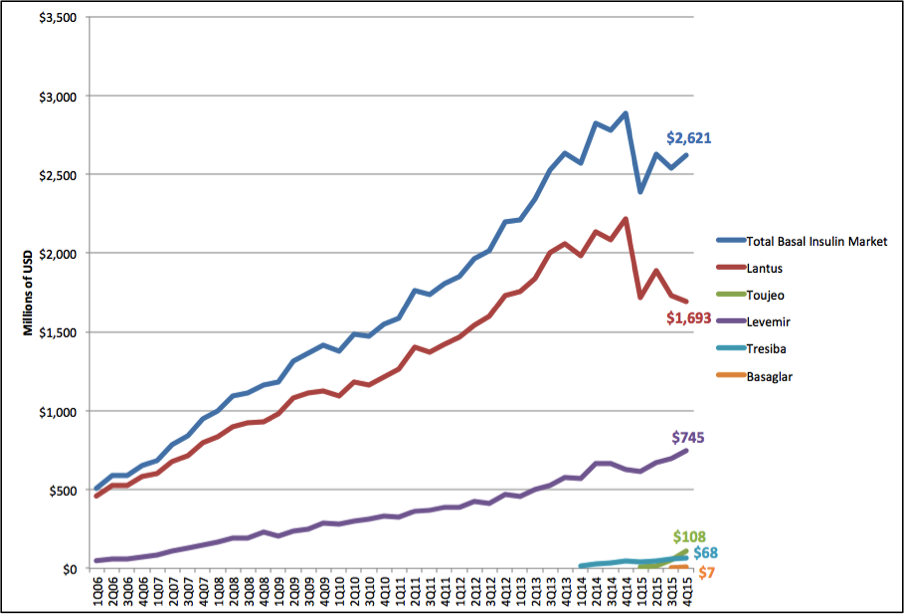 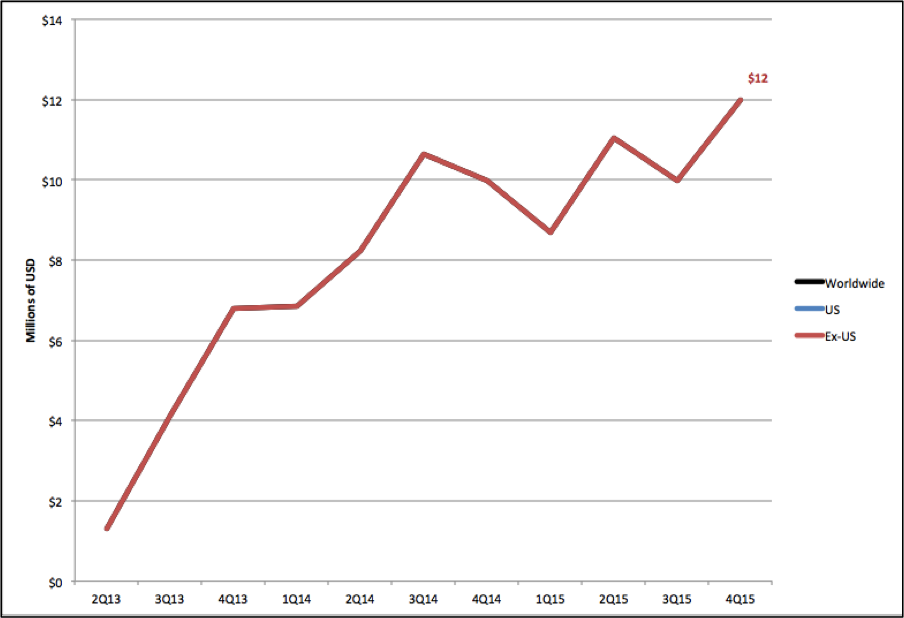 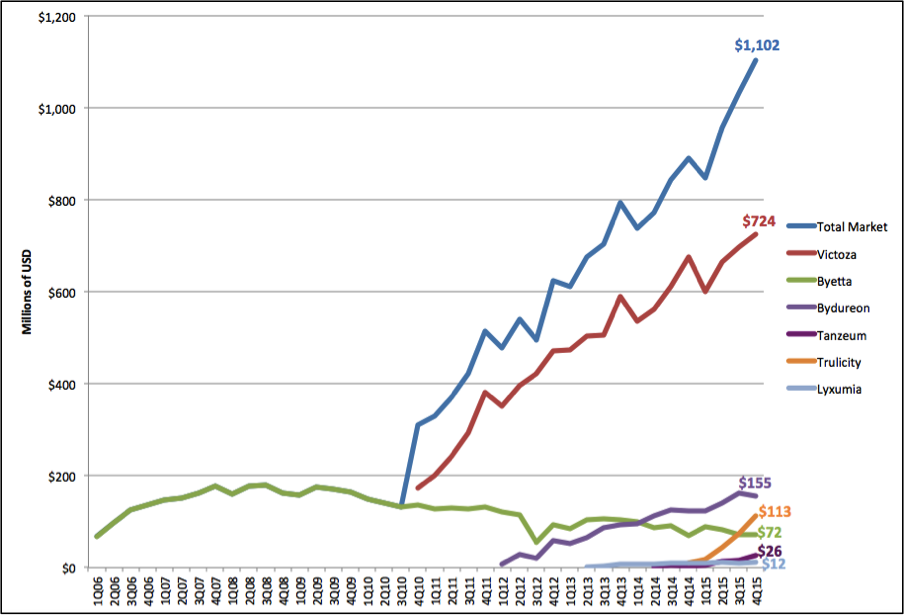 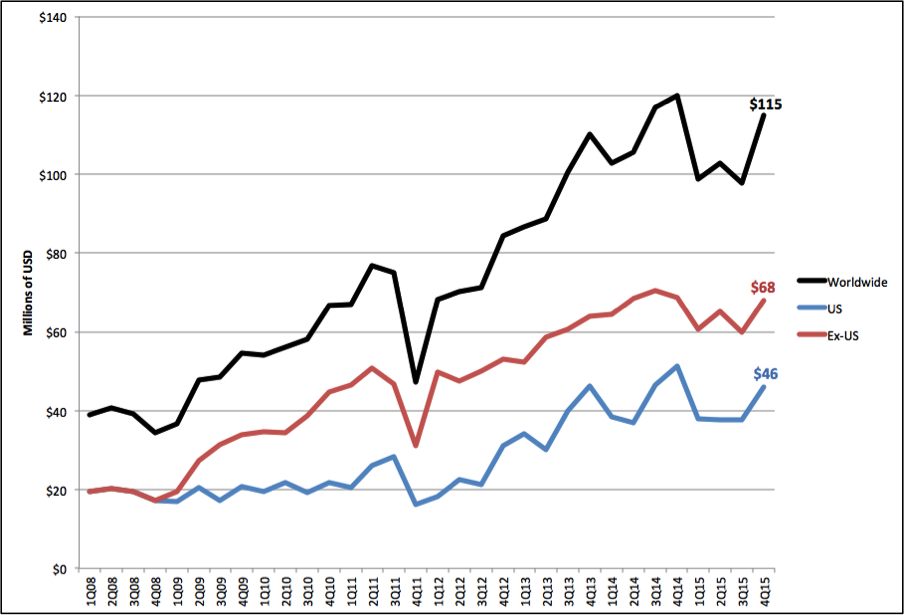 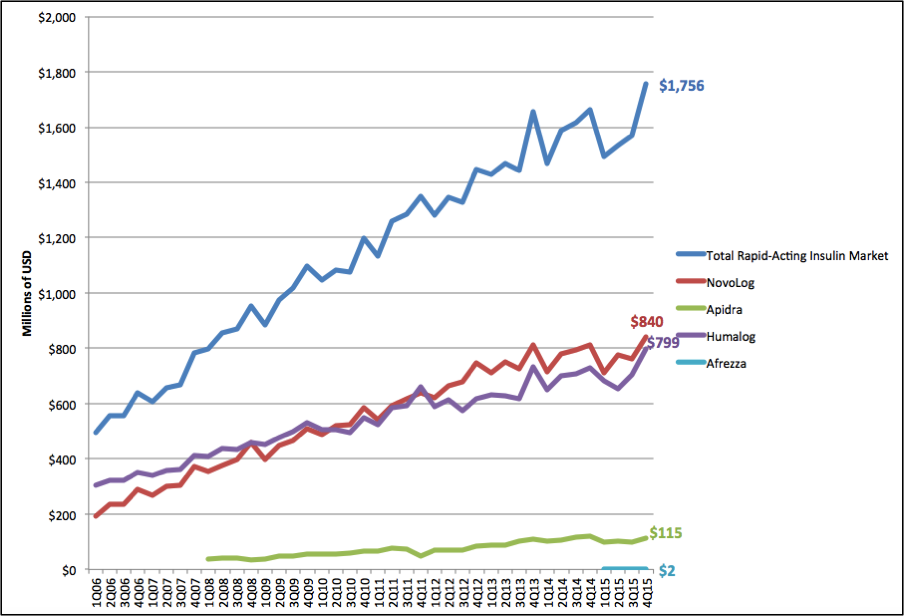 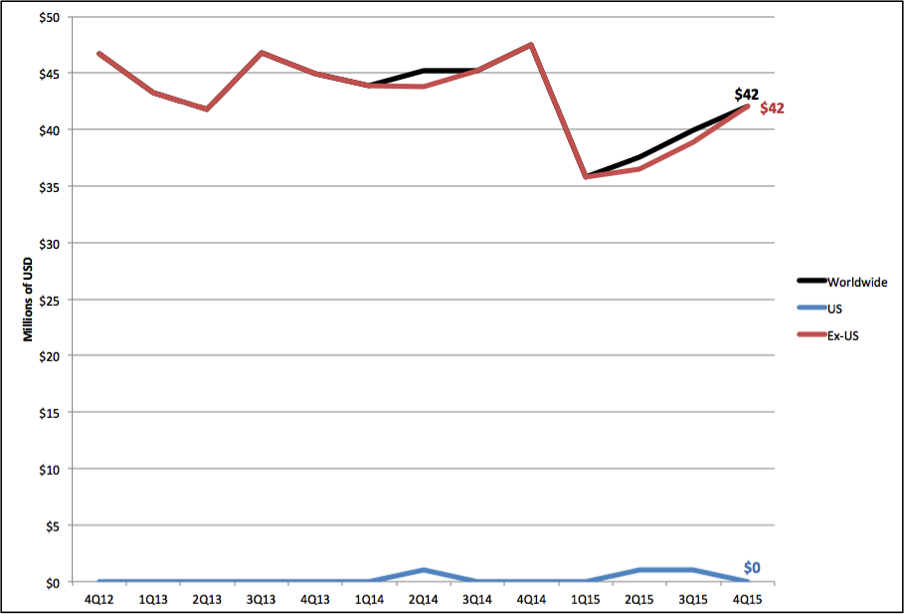 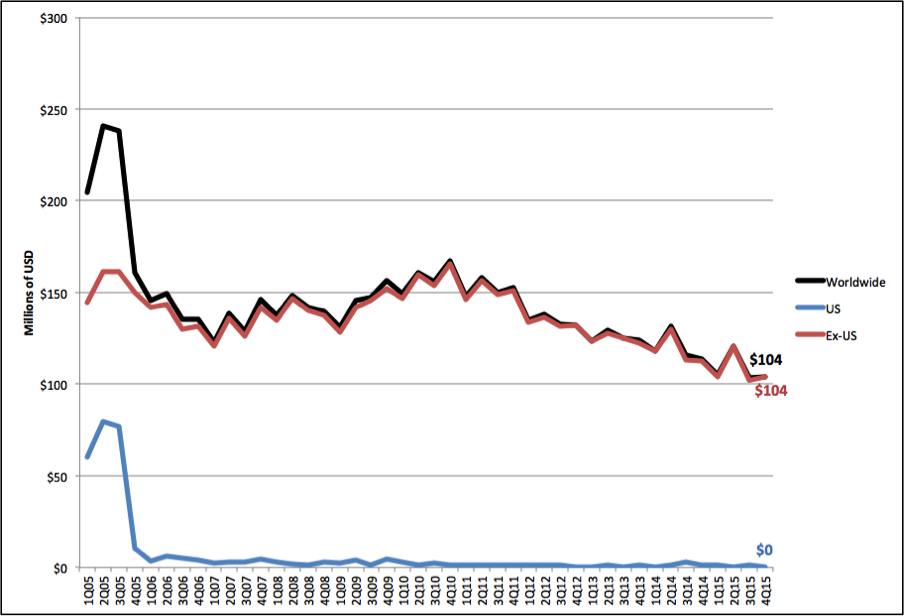 Q: On the diabetes guidance, your comment suggested operational effectiveness and I suppose you are improving the development of the Toujeo business. Should we be thinking of a slower decline in 2016?

A: We do expect the first half to still see some pressure given the Medicaid extension and the backfills and the year-over-year comparison. But as we move through the year, we do think that those factors are going to relax a little bit. And meanwhile we’ll see the acceleration of the Toujeo ramp-up, which we are very pleased with.

Q: Can you comment on volume growth in the US insulin market? IMS data does seem to suggest a slowdown. Is that correct, given that we don’t see all the channels? And if there is a slowdown, do you have any explanation of where that’s coming from and what that potentially can bring?

A: As you remember in 2014, the market growth was 7.2%, if I’m recalling correctly. We saw a slowdown in 2015 in the range of 4.9%. And we do think that some of this may come from what we have seen historically, which is when there is a growth of a different class in diabetes, insulin slows down. And in this case, we have seen an acceleration of the SGLT-2 inhibitor class and the GLP-1 agonist class, which may explain the slowdown. As far as 2016 is concerned, we have modeled low-single digit market growth.

Q: On the insulin side, could you address why we saw a slowdown in new-to-brand share? There was very strong growth in the Toujeo new-to-brand through December and then since December it seems to have plateaued.

A: When you look at the analogs, this is something we see. There are a couple of months where there’s a plateauing effect of the NBRx and I think this is quite normal. Besides that, you probably had seen a little bit of ramp up of the Toujeo shares with TRx being above 4%. The NBRx is following the same trend. We’ve seen NBRx moving to the point where we have 15% or around 13.5% share of NBRx. When you look at this flattening, it is consistent with the trends we have seen with other analogs like Victoza or Bydureon. So that’s where we are, and that’s what we think may be the explanation. The important aspect to follow is our sales in 4Q15. We’re about €100 million globally. So it’s a very good pickup and a good run rate of about €400 million entering 2016. We’re very encouraged by the pickup from Toujeo.

Q: Is diabetes the only area where you see pressure on pricing in the US? As you look forward into 2016 and maybe 2017, are there other disease areas where you see this sort of thing starting to build?

A: I think the answer is no. Diabetes is certainly, at least in our portfolio, the area where we have seen pricing pressure. We’re not observing anything similar in other areas we are in, either MS or rare diseases. And we don’t see any new trends outside the US, with the exception of China where the old pricing system is under review and has moved from central government to provinces.

Q: What have you built into your forecast about assumed price increases in the US? Is it a lesser level than what you were able to realize in 2015 due to voluntary price moderation?

A: We have not baked in any significant price increase or anything different from what we had in 2015. In diabetes, the market situation is somewhat specific. In that respect, I don’t think it’s very comparative. The question is more when do we stabilize, and I mentioned that as from the second half of 2016, we should see a stabilization of the channel mix impact vs. 2015, not exactly in the first half of 2016. For the rest, we had been very conservative, but very much in line with what we did in 2015.

Q: On Lantus, in the 31% decline in US sales, what has been the part of the true-up of discounts especially for Medicaid? And how much are you baking into your guidance for 2016?

A: In 4Q15 Lantus was down 32%. But actually, although it looks greater than the 20% decline of the previous quarter, you may remember that in 4Q14 we took a price increase in mid-November. That accounts for about half of the decline. The remainder of that is the advanced growth to net effect and the incremental Medicaid rebates. When you took those elements out, we are in line with the 3Q15 decline.

Q: On Praluent, could you talk through your expectations for sales ahead of the outcomes data?

A: What we have focused on in 2015 is access and we related the level of access and coverage we have obtained. We now have more than 172 million lives covered and as you could hear, this is a very good start and that’s what was really the focus of 2015.

Q: What proportion of patients on Praluent do you have on assistance programs at the moment? What might the rollover be?

A: A majority of patients are in those programs. And as we now have a good coverage position, we do expect that it will ramp up and we’ll see an acceleration of prescriptions throughout 1Q16. We think we’re going to have very good coverage from Medicare by the end of the first quarter. And we expect a fair amount of patients coming from that channel where we have obtained the best coverage. So again, we expect to see patients being transferred in commercial prescriptions after that first quarter.

Q: What is the average copay your patient has on Praluent given that you can’t give copay assistance in Part D?

A: At this stage, I don’t think we can comment on this. I don’t know. We said we’re proud of the coverage both on Medicare and on commercial. We are very satisfied with the starting point that we have. I think that’s all we can say here.

Q: Could you tell us about some of the barriers doctors may have in prescribing Praluent? Are there issues like prior authorization or proving you have failed five previous statins?

A: As you know, this is a new type of medicine this year for the target physicians. This is why coverage was so important and this is why focusing on access was our main focus in 2015. Now it’s the only one because the other focus was driving awareness and adoption. This is a medicine that is indicated for patients who are still at a high level of LDL cholesterol despite their current regimen. And we’re working with the payers to make sure this is addressing the patients that it is intended to. As part of this process, there is a first step of ensuring coverage. And then the payers have different formularies to allow the prescription. So some of them do ask for some statin prescription before or a check before Praluent is prescribed.

Q: On Praluent, can you give us an update on the legal disputes vs. Amgen? Is there a risk of triple damages here?

A: Needless to say, we don’t believe that the Amgen patents are valid and we are confident on the law and the fact that will support our distribution. You may have realized that we are circulating to infringement to simplify the issue at the trial. That’s an indication that we have a strong invalidity argument. What’s the next step? There will be a seven-day jury trial beginning on March 7 of this year. We will of course monitor it very carefully and be present. And needless to say, both Sanofi and Regeneron are vigorously defending any claims from Amgen.

Q: What can you tell us about the event rate and pattern in ODYSSEY OUTCOMES? Sanofi expects to have 1,200 events by year-end but isn’t saying when you will see 50% of events or the 800 for the futility look.

A: As you know, this is an event rate-driven trial, so it’s not possible for us to have a fixed date. What I can tell you is that we completed enrollment ahead of schedule in November. I can also tell you there are two interim studies, one with a 50% event rate that will be a futility study to determine whether or not we have any effect. Second, a 75% event rate for overwhelming efficacy. At this point, what we have predicted from the planning of the study is that we would have all the results by the end of 2017. However, when you look at our event rate, we think that we’ll have the first analysis within the first half of this year, probably the end of 2Q16. So you can do your math, and depending on statistical projections, you can see where those results might be. Again, I’ll remind you that the interim analyses are not under our control. They’re under an independent data safety monitoring board. And what they decide is fully under their control.