The first-ever virtual (and 46th overall) ISPAD conference kicked off this morning, Central Daylight Time, with participants from all over the world. See our top highlights below and our preview for a look ahead at the next two days.

Tandem’s Vice President of Behavioral Sciences Dr. Steph Habif gave us a first look at real-world pediatric data (ages 6-13) on Control-IQ. As a reminder, Control-IQ was first cleared for this age group in June. The data was gathered through Tandem’s t:connect software from ~1,400 users with at least 75% CGM use and at least 30 days of pre- and post-Control-IQ data. Mean age of the group was 11 years and 51% were female. 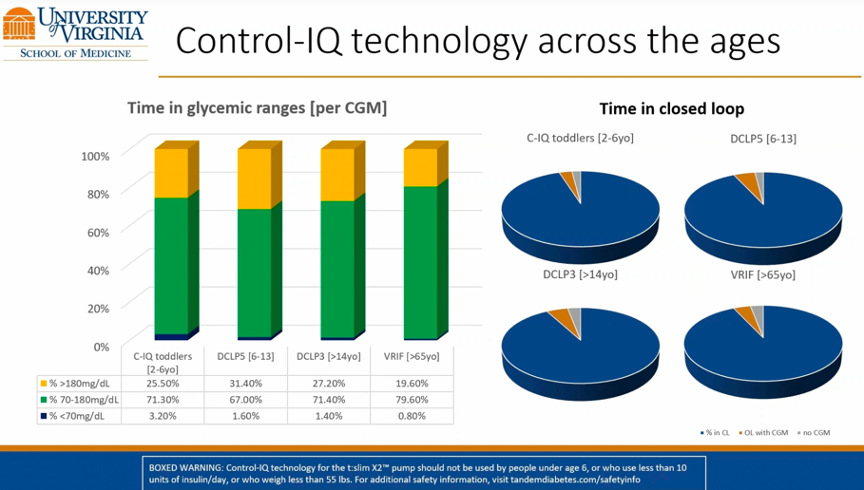 In a morning session on diabetes technology, Dr. Dorothy Shulman (University of South Florida) presented results from the 39-person adolescent subset (ages 14-21) of Medtronic’s Advanced Hybrid Closed Loop (MiniMed 780G) pivotal. Participants all had at least six months of pump experience at baseline and began with a 14-day run-in period using either sensor-augmented pump or MiniMed 670G therapy. Then, participants were randomized into either 100 mg/dl or 120 mg/dl set point groups for three months, with cross-over at 45 days. 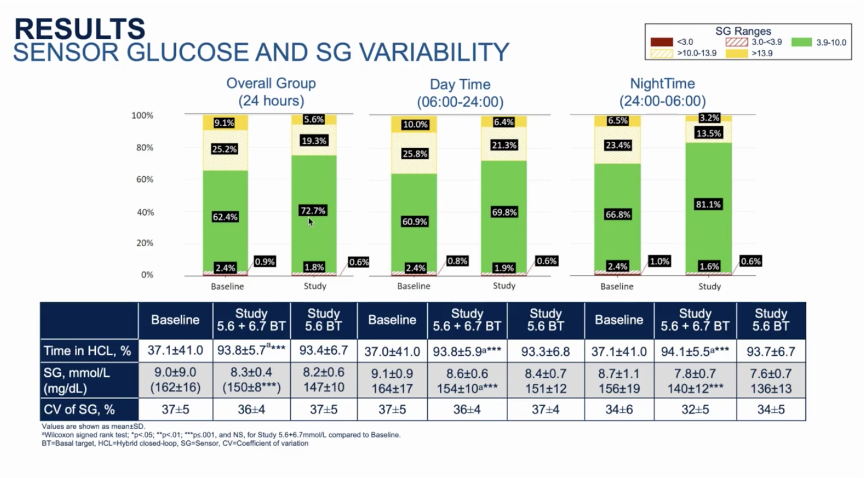 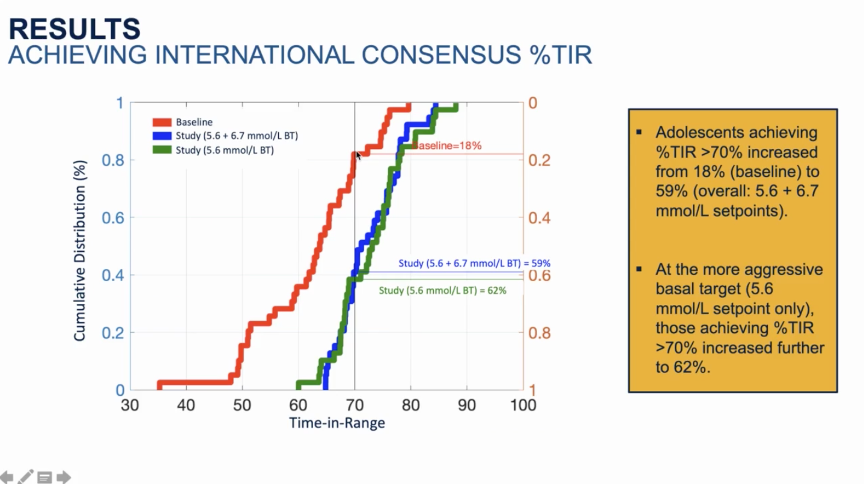 Note: Time in closed loop during baseline is from some participants using the MiniMed 670G system during run-in.

During an Abbott-sponsored symposium on Thursday morning, Dr. Nancy Elbarbary (Ain Shams University, Egypt), Dr. Fiona Campbell (Leeds Children’s Hospital, UK), and Dr. Karin Lange (Hannover Medical School, Germany) discussed the power of flash glucose monitoring in pediatric populations and offered practical advice for its implementation. Dr. Campbell encouraged organizations, hospitals, and national health systems to learn from each other’s successes, sharing her own experience applying learning from Swedish successes with CGM and glycemic control in pediatric populations to country-wide English and Welsh pediatric diabetes standard practices. She also advocated for a strong, unified national registry for pediatric technology use and glycemic outcomes so that progress can be measured, and the impact of national programs can be assessed. In her talk, Dr. Elbarbary shared the Arab Society of Pediatric Endocrinology and Diabetes experts’ six general recommendations for increasing the uptake of CGM in pediatric populations: (i) train HCPs in the use and interpretation of CGM data; (ii) collaborate with pharmaceutical partners to provide quality training; (iii) standardize metrics and reporting across different CGM devices; (iv) include summary pages in reports that are meant for patients and parents; (v) encourage patients to use CGM during Ramadan to monitor their glucose profile and practice safe fasting; and (vi) push for the study of application sites other than the upper arm.

Dr. Charlene Lai (Children’s Hospital of Philadelphia) presented results from a retrospective chart review showing massive racial disparities in rates of CGM initiation and sustained CGM use in children with type 1. The study gathered data between 2015-2018 from 1,509 children in Pennsylvania with type 1 who were not using CGM and were <17 years old on January 1, 2015. Of the 1,509 participants, 279 were non-Hispanic Black (19%), 125 were Hispanic (8%), and 1,105 were non-Hispanic white (73%). Pennsylvania residency was required for inclusion in the study, ensuring that insurance coverage would not be a barrier for any participant; Pennsylvania state Medicaid coverage offers CGM use to all pediatric type 1s. 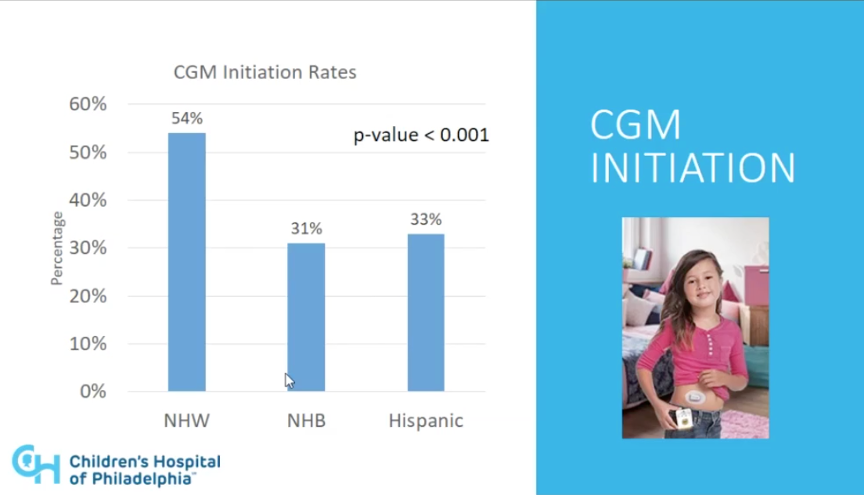 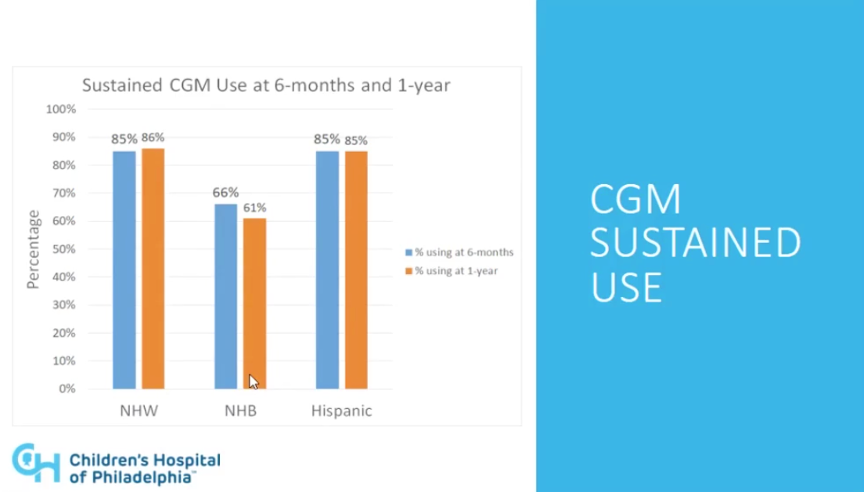 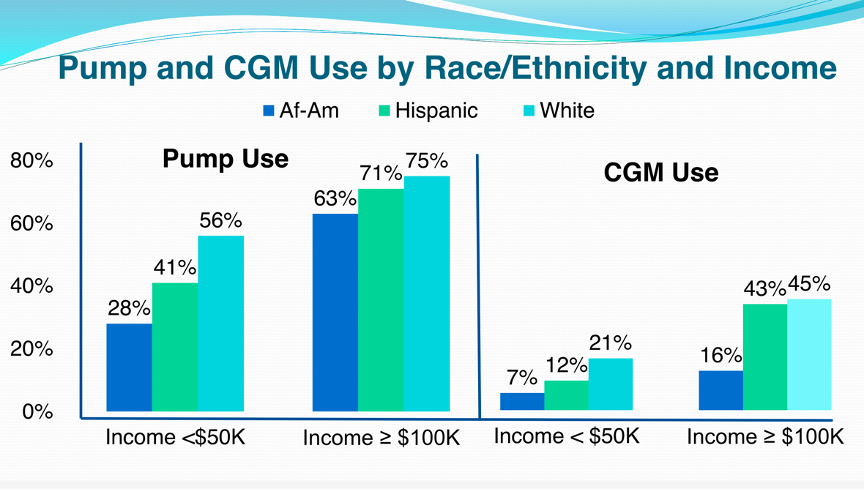 1. Professor Chantal Mathieu on the Promises and Pitfalls of Adjunctive Therapies in Type 1 Diabetes

Professor Chantal Mathieu (KU Leuven) discussed the benefits and drawbacks of nasal glucagon, GLP-1 receptor agonists, and SGLT-2 inhibitors in type 1 diabetes. While nasal glucagon was presented as a possible treatment option for severe hypoglycemia in pediatric type 1 populations, Professor Mathieu underscored the difficulties and often insufficient evidence to support GLP-1 receptor agonist and SGLT-2 inhibitor use in adult patients, not to mention children and adolescents. Conflicting evidence has yet to determine if GLP-1 receptor agonists increase risk of hypoglycemia in type 1, while SGLT-2 inhibitors have been repeatedly shown to increase risk of diabetic ketoacidosis (DKA). See below for Prof. Mathieu’s detailed takes on each novel treatment option. 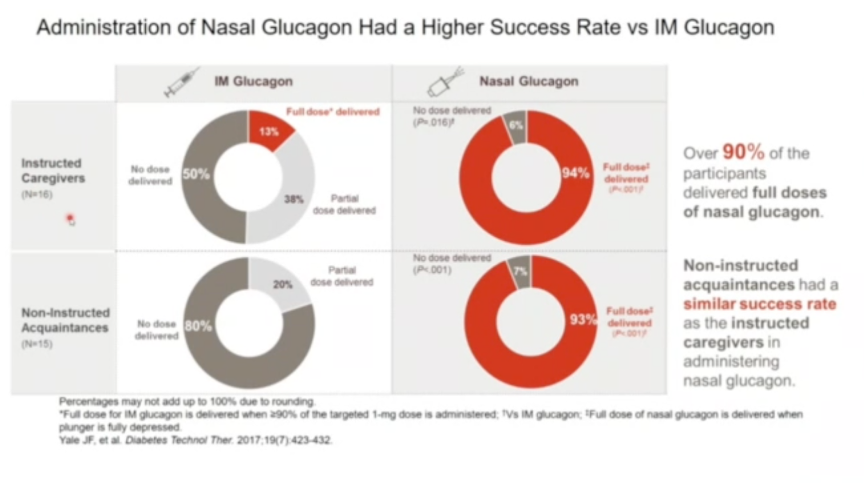 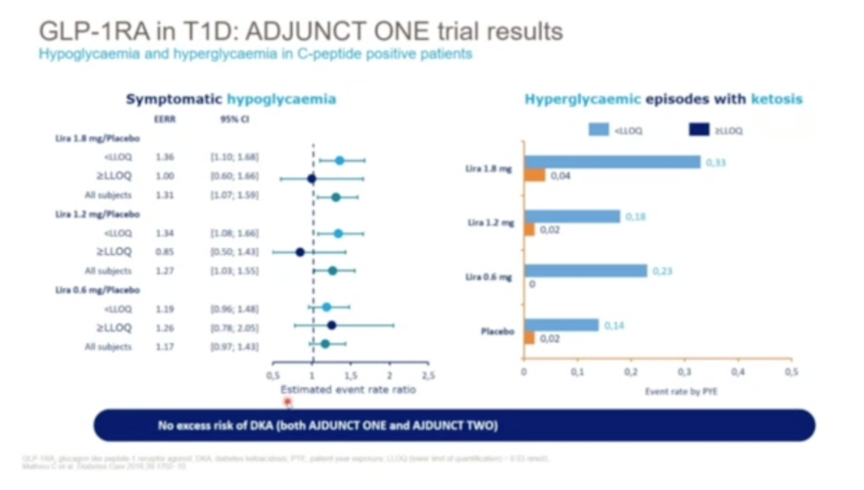 In a Sanofi-sponsored symposium, Professors Thomas Danne (Hannover Medical School Germany), Tadej Battelino (University of Ljubljana, Slovenia), and Katherine Barnard-Kelly (Bournemouth University, UK) reviewed options for reducing the burden of type 1 diabetes care in children and adolescent populations. Dr. Danne highlighted the potential of second-generation basal insulins for improving outcomes in pediatric patients, while Dr. Battelino advocated for the use CGM and time in range metrics. Dr. Barnard-Kelly then put these treatment strategies in perspective, calling to attention the psychological burden of diabetes in children and offering actionable guidance for incorporating management strategies in a personalized manner. 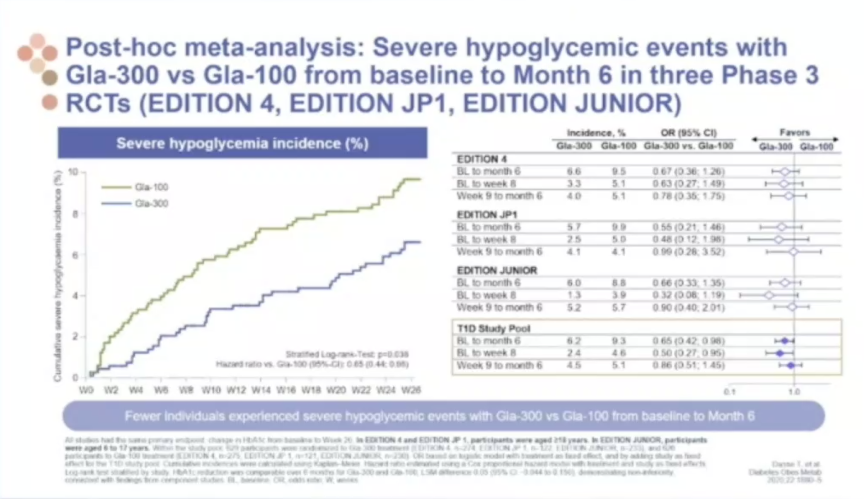 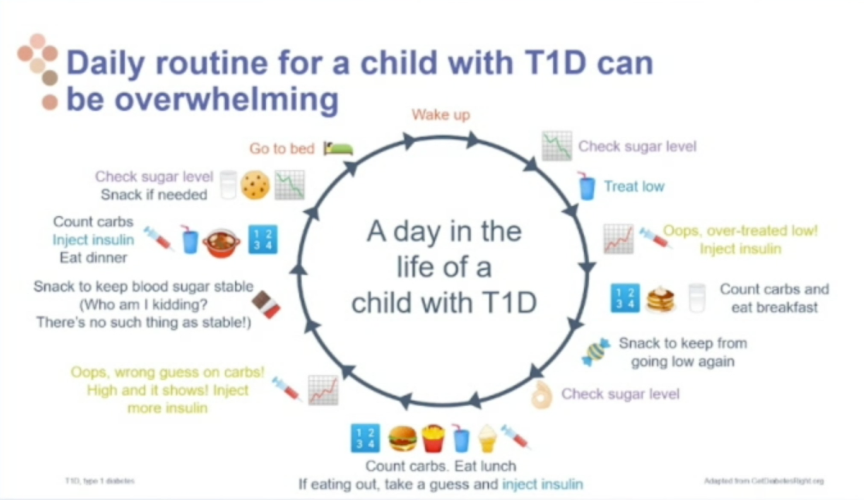 Drs. Linda DiMeglio (Indiana University School of Medicine) and Michael Haller (University of Florida) provided a critical analysis of the history of research in type 1 diabetes treatment and prevention, with focus on future next steps. Dr. DiMeglio began the session with a discussion of therapies from the discovery of insulin in 1922 to the plethora of smart devices, like AID and CGM, that promote better diabetes management. We’ve gained four main insights throughout this process of discovery: (i) type 1 diabetes progresses through stages (outlined below); (ii) we’re at the cusp of predicting who will progress from stage one to stage three; (iii) beta cell function can be preserved in stage three; and (iv) new therapies can prevent the progression from stage two to stage three. While these insights have led to the discovery of effective therapies like teplizumab, alefacept, and golimumab, areas for improvement remain. Dr. DiMeglio highlighted three main shifts to embrace for progress: embrace type 1 as a diverse syndrome, embrace change overtime, and remember to study beta cells and the exocrine pancreas beyond autoimmunity. If different endotypes of diabetes are included in trials, new, individualized therapies can be discovered for patients in different subgroups based on genetic disposition, disease stage, and beta cell health markers. With this, embracing change and revisiting the type 1 diabetes paradigm will improve efficacy in treating new-onset disease, as well as support individualized approaches. 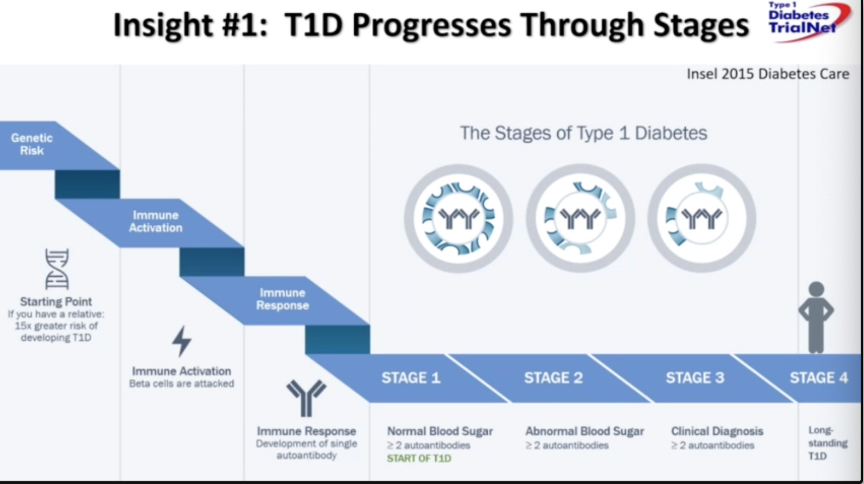 4. Dr. Sinead Murphy on the Importance of Psychosocial Care in Adolescent Obesity

Childhood obesity is on the rise, and as described by Dr. Sinead Murphy (University College Dublin), it is a global phenomenon that requires focus on psychosocial factors to best support youth. Dr. Murphy began her presentation with sobering statistics; the average 14-year-old now weighs double what they weighed in 1948, and 15% of youth aged 10-17 are considered obese in developed countries. This presentation couldn’t be more timely, as The Robert Wood Johnson Foundation just released their 2019 State of Childhood Obesity report, which showed that 15% of American youth currently have obesity. Adolescents, defined as youth age 10-19 by the WHO, face specific challenges with puberty and brain development that complicate their experience with obesity and overweight. Dr. Murphy emphasized that obesity is also tied to neurobehavioral factors, most explicitly with food resistance related to brain development. While puberty does offer a window of opportunity with growth-spurt caloric deficits, about 90% of youth with obesity will have obesity persist into adulthood. This leads to medical, psychological, and social comorbidities, of which the latter two are key to managing obesity in up to 40% of youth. As obesity is tied to weight stigma, Dr. Murphy believes that social support and weight management groups are important components of treatment. Specifically, poor psychosocial functioning can become a treatment barrier, as many conceptualize obesity as a signal of low self-discipline, self-worth, self-esteem, and education. Dr. Murphy suggests a collaborative approach between the stakeholder, the person with obesity, and provider. With a psychosocial approach, this would take the form of an assessment, intensive treatment phase, and extensive maintenance phase. Ideally, this involves clear program eligibility, self-referrals, anthropometry, psychological assessment, a holistic approach, maximum support and weight loss goals, and proper outcome appraisals. Newer therapies for adolescents, like medications and bariatric surgery, may also be helpful as long as psychological needs are met. Overall, Dr. Murphy believes that obesity interventions for adolescents should remove blame, recognize psychosocial factors, and pair with long term support. 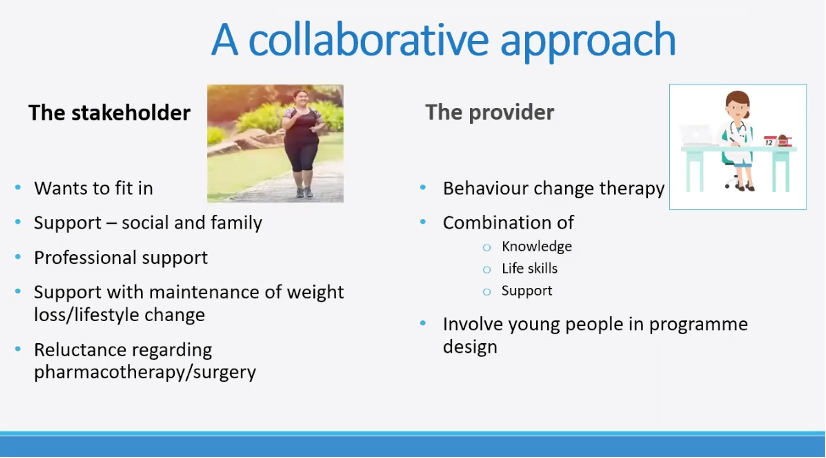