Insulet reported 3Q18 results this afternoon in a call led by CEO Patrick Sullivan, COO/President Ms. Shacey Petrovic, and CFO Mr. Mike Levitz. It was Mr. Sullivan’s final call as Insulet’s CEO – and his 60th career Wall Street earnings call! – following four very impressive years at the company’s helm. This was a fitting quarter, given Insulet’s record US and OUS Omnipod sales, first-ever net income, access wins in Medicare and Medicaid, and exciting AID pipeline updates. “Operator, I’ll drop the mic and you can drop the curtain.” Well said, Mr. Sullivan, and we wish you the very best in retirement (such as that may be). The talented and very highly-regarded Ms. Shacey Petrovic will become Insulet’s CEO starting January 1, 2019. See the call’s exciting pipeline and financial highlights below!

In a major interoperability victory, Insulet announced today it is the first pump partner for Tidepool’s Loop, meaning the on-body pod will communicate directly with Tidepool’s Loop app (via Bluetooth) and enable hybrid closed loop from a user’s own iPhone (no PDM needed). This effort complements Insulet’s own Horizon hybrid closed loop efforts (see below), gives Omnipod users choice of hybrid closed loop, gives Insulet two AID irons in the fire, and represents a huge win for the DIY community – nice! Loop’s timing is in Tidepool’s hands, though COO Shacey Petrovic noted that this path “could potentially accelerate” Insulet’s time to market with hybrid closed loop vs. Horizon. Given Horizon’s new “2H20” launch timing noted below, this implies Tidepool Loop with direct Omnipod/Dexcom G6 integration could theoretically be on the market in two years – that would be quite fast, as we guessed Tidepool Loop was more like 2-4 years away (read our detailed coverage) – we didn’t know Insulet would move so fast! Ms. Petrovic was clear that this is theoretical timing, but there are many advantages for Tidepool Loop: the DIY Loop app already exists today, is used by over 1,000 people, and “may have faster pathways to market” using real-world data (e.g., HCT-funded observational study expected to begin this month). “The Loop product already works,” Ms. Petrovic noted, “and this potentially offers us some acceleration.” This is also a huge victory for Tidepool, getting one of the world’s largest and most innovative insulin pump makers on board and driving to a truly compelling on-body user experience: a tubeless pod, a CGM sensor, and a user’s iPhone running hybrid closed loop. Lots of things have to go right, however, and it’s hard to know at this point FDA’s approach plus how to answer fully questions related to customer service, etc.

Insulet’s Horizon hybrid closed loop is now expected to launch in “2H20,” with direct user smartphone control confirmed for the first time ever today – i.e., the algorithm will be on the pod, a Dexcom G6 sensor will talk to the pod, a user will remain in closed loop when the phone is out of range, and a user will interact with the system (including bolusing) direct from Insulet’s app on his/her own smartphone. Nice! Notably, Horizon “was recently granted designation in FDA’s breakthrough device program,” enabling an expedited development path and “accelerated review and approval.” The positioning of this statement today made it seem like the designation related to the direct smartphone control aspect paired with hybrid closed loop on the tubeless pod. As a reminder, the MiniMed 670G had a “priority review” of three months, though the FDA and Medtronic worked together for over two years on the path; we assume something similar is likely here, and it’s great to see the timing specificity. It was some time from approval to launch of the 670G.

Insulet’s Omnipod Dash system will broadly launch in the US in early 2019, with the primary focus on pharmacy distribution. Notably, the PDM will have no upfront cost, lowering the barriers to start on pump therapy and a true pay-as-you-go model for payers. The pharmacy focus on free PDM were confirmed today for the first time, a big update and very patient-friendly move – even a $299 fee would have been a lot for many and slowed down the transition/uptake. Kudos to Insulet! While shifting to pharmacy has been a clear goal for Insulet in 2018, especially after Medicare Part D designation in January, today’s call confirmed payer conversations for Dash have taken place with pharmacy distribution in mind. Remarkably, Insulet expects to launch the Dash system with over 100 million covered lives in the pharmacy, and it is already at over 75 million covered lives with the payer conversations to date. One of the big payer tailwinds has been the move to no upfront cost for the PDM, with slightly higher pricing per pod. Overall, this is expected to be revenue neutral for Insulet over the course of a year, though in the short-term it presents a slight revenue headwind. Still, this is absolutely the right move for patients and HCPs (less hassle), payers (less upfront risk), and for Insulet (much less costly to serve the pharmacy channel).

On the Medicare Part D front, progress is impressive: at the end of September, “almost 1/3 of Medicare Part D covered lives” were covered for Omnipod and Omnipod Dash, including Optum (newly added), Express Scripts, and Magellan.  The coverage officially starts on January 1, 2019, though over 1,000 Medicare beneficiaries have already gained Omnipod coverage through the exception process, with an impressive >80% success rate. Management said users can select a Medicare Part D plan that covers Omnipod, and if they don’t want to do that, they can pursue the exception process – awesome news, given the multi-year fight to get this through CMS. Medicare coverage is not expected to ramp much further before 2019, implying the agreements Insulet has in place now are likely to be the ones that launch on January 1, 2019.

3. CE Mark received for Dash (not yet publicized); working through launch plans now

Insulet has already received a CE Mark for the Dash system in Europe, an under-the-radar update that only came up in Q&A. COO Shacey Petrovic was caught slightly off guard by the analyst (Danielle Antalffy) and noted that Insulet has not yet publicized the news, as the team is still working through launch plans. Per Keystone 2018, a global expansion for the Dash PDM is expected in “2H19,” which seems very reasonable assuming translations and manufacturing supply is ready. 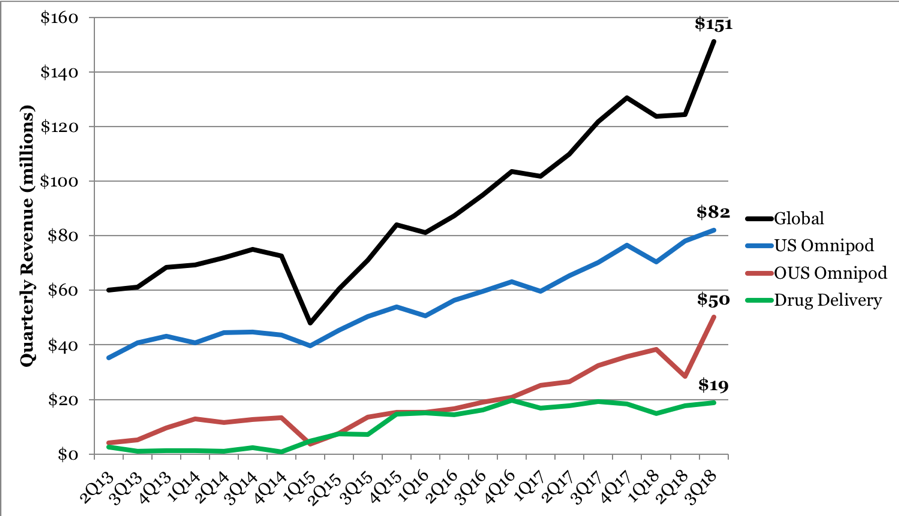 In a record quarter for profitability, Insulet reported its first-ever net income of $1.7 million and a remarkable gross margin of 67.5%. Compared to one year ago, both metrics moved nicely: net loss was $2.2 million and gross margin was 60.5% in 3Q17. Operating income also tripled, up to $6.9 million from $2.0 million in 3Q17. Insulet remains on track for positive operating income for the full-year 2018, also a first in its history. The profit margin expansion was attributed to continued manufacturing/operational efficiencies, alongside going direct in Europe. Under CEO Patrick Sullivan, this team has made remarkable progress on profitability – when he joined four years ago, Insulet’s gross margins were under 50%! Full-year 2018 gross margins are expected at 65%-66%, an impressive increase from ~60% for all of 2017. Management said the 2021 gross margin target of 70% remains on track, even with some near-term disruption in 2019 as the new highly automated US manufacturing facility comes online. It’s not Novo Nordisk at 84%, but it’s pretty high ….

In his final call as Insulet’s CEO, and the 60th Wall Street earnings call of his career, CEO Patrick Sullivan was gracious, enthusiastic, and grateful. See his comments below, which truly reflect the remarkable progress in a very short period of time. As we covered in September, talented and very highly regarded President/COO Shacey Petrovic will become Insulet’s CEO starting January 1, 2019. Mr. Sullivan has achieved a remarkable amount at Insulet, making several leadership changes early in his tenure and putting the company on a remarkable track – record revenue, pivoting to profitability, building a strong pipeline, dramatically improving access (Medicare, Medicare), and more. We are sad to see him retire but agree that Insulet is in extremely capable hands with Ms. Petrovic.

1. U500 Omnipod: “still working” with Lilly to get over the finish line on FDA submission; “making good progress” on U200

Insulet is “still working” with Lilly to submit the U500 Omnipod to the FDA, following the positive pivotal data presented at ADA. The most recent timing shared several quarters ago called for a 2019 launch of U500 Omnipod, and that had been further delayed from a first half 2019 expectation back in 2016. Obviously, progress will depend on the FDA submission timing and speed of review – presumably it will be an in-depth review, though we’re not sure. Meanwhile, the U200 Omnipod is “making good progress,” though no timing was shared today. The 2Q18 call expected this to launch “toward the end of 2020 or 2021,” back from February guidance for a 2020 launch.