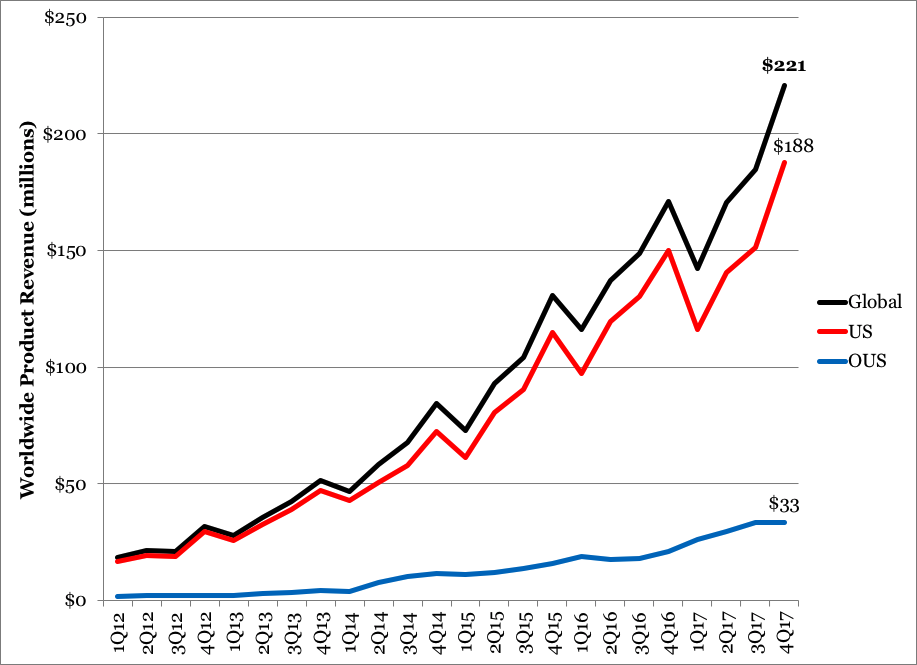 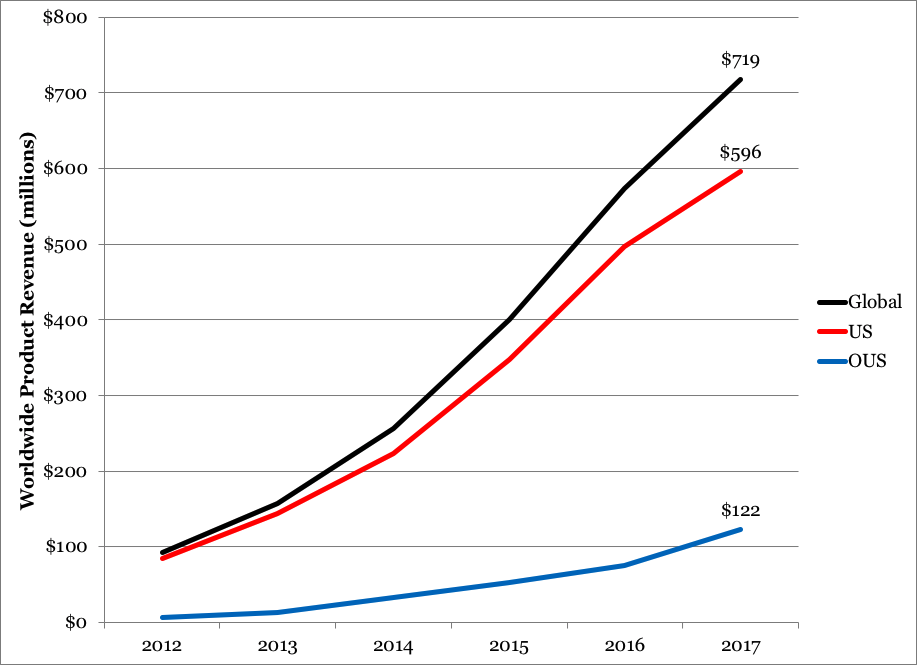 Management reiterated the guidance shared at JPM last month: 2018 sales in the range of $830-$850 million, a 16%-19% YOY rise over 2017. The business’ key indicators – sensor volumes, OUS revenues, and patient base growth – are expected to exceed 20% growth for the year, again outpacing revenue growth. Assuming the patient base grows 20%-25% YOY in 2018 (our speculation), Dexcom would have over 325,000 patients by the end of 2018. This near-term outlook contemplates a number of 2018 variables, including the no-calibration G6 launch (see below) and continued Medicare and OUS expansion. Headwinds include the Animas departure and the impact of ongoing competition and potential pricing pressure. At JPM, Mr. Sayer emphasized the bigger access Dexcom has going into 2018, especially Medicare and Germany – in total, this is an incremental ~1 million patients.

Excluding a one-time (non-cash) tax charge of $18.2 million, Dexcom reported net income of $8.8 million in 4Q17 – its most profitable quarter ever, and an improvement from the $2 million net loss in 3Q17 and the $7.4 million net loss in 4Q16. The non-cash tax expense came from the reversal of a non-cash tax benefit related to Dexcom’s senior convertible notes recorded in 2Q and 3Q17. New CFO Quentin Blackford highlighted the business’ leverage in Q4 – operating expenses of $142 million grew 15% YOY in 4Q17, nearly half the rate of revenue growth. For 2017 overall, operating expense growth of 20% was more in line with the 25% revenue growth.

5. Dexcom participates in Tandem’s recent stock offering ($5M) – “We’re extraordinarily committed to all of our pump partners, including Tandem, Insulet, and Lilly.”

An analyst astutely noted that Dexcom actually participated in Tandem’s successful $69 million fundraise (completed two weeks ago). Indeed, an SEC filing from last week confirms that Dexcom purchased 2.5 million shares in the offering (34.5 million total shares were offered), and given the price of $2/share, implies Dexcom invested $5 million. Noted EVP Steve Pacelli in Q&A: “No, this should not be viewed by the street as the first step to an acquisition. We’re extraordinarily committed to all of our pump partners, including Tandem, Lilly, and Insulet. At the end of the day, we discussed with Tandem, how participation might influence their offering. We agreed if they raised a sufficient amount of capital, we would participate. When it became clear they would raise more than enough to get to a place with a couple really significant new product launches, it became a no-brainer.”

The type 2 diabetes program with UnitedHealthcare was mentioned a couple times today, which is now “actively enrolling” in a ~10,000-participant pilot testing CGM, connected devices (e.g., Fitbit), and coaching. This major initiative was first announced in November, received a lot of air time at JPM and CES, and is clearly moving ahead quite quickly. Dexcom expects to invest “somewhere between $10-$20 million” on the non-intensive CGM work in 2018, a major strategic play. A point of emphasis continues to be medication costs in type 2 diabetes, something Dexcom CGM + coaching might help payers with. Management cautioned that it’s too early to talk about business models, as they will evolve out of this initial 10,000 patients. That said, assuming Dexcom CGM can drive medication reductions and/or optimization, we’d imagine shared savings are a possibility. 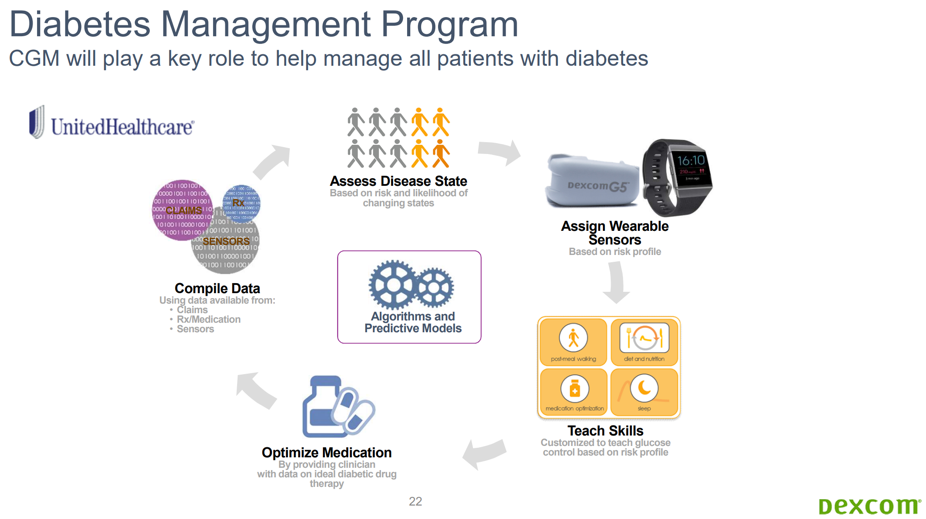 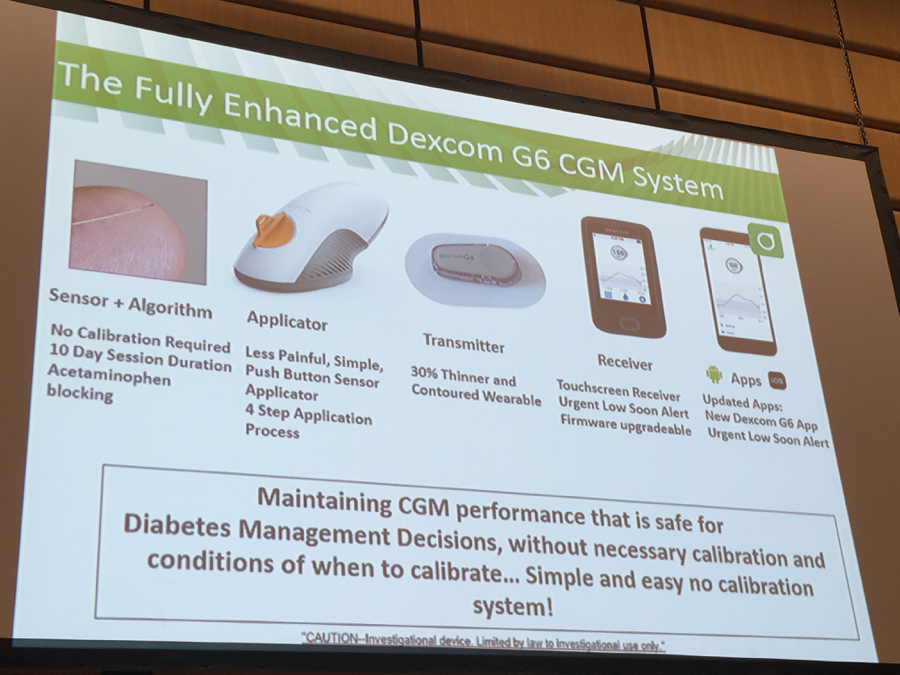 Following updates at JPM and at ATTD, G6 timing remains the same – the 10-day-wear, no-required-calibration system remains under FDA review (“productive”), with a global launch expected this year. Mr. Sayer positioned “mid-year” as a goal, in line with JPM comments and still reflecting an ~9-month review from the 3Q17 submission. The biggest new news today concerned a 10-day required shut-off, which remains a point of discussion with the FDA. This would make G6 similar to FreeStyle Libre, where a sensor cannot be restarted after 10 days of wear. Mr. Sayer did not comment one way or the other, but we’d be surprised not to see a mandated shutoff in G6, given the factory calibration. Dexcom has shared in the past many 24/7 users wear ~3 sensors per month, meaning mandated 10-day wear (no restarts) would actually keep the same number of sensor changes. Of course, restarting sensors is a tremendous benefit for those struggling with out-of-pocket costs, so this will be key to consider as Dexcom and FDA move ahead.

2. Medicare discussions continue on remote monitoring (Share), “hope to resolve in the next six months”

In the first update since Keystone 2017, Mr. Sayer confirmed that Dexcom-Medicare discussions are ongoing regarding G5 smartphone connectivity/remote monitoring. “We hope to resolve [this] in the next six months,” said Mr. Sayer. He added in Q&A that he’s “not sure” if this is slowing G5 Medicare adoption, but Dexcom would certainly love the opportunity to market connectivity in the senior population. Getting this worked out would be a tremendous safety win for patients. It would also give Dexcom’s G5 a major leg up on Abbott’s Medicare-reimbursed FreeStyle Libre, which does not currently have remote monitoring or smartphone communication (the new FreeStyle LibreLink app is available in 12 EU countries, but no FDA timing has been shared).

The Verily gen one sensor launch continues to depend on the no-cal G6 regulatory discussions. The gen one product will complete development “this year,” more vague than updates in 3Q17 and at JPM. In January, Mr. Sayer positioned a first-gen “limited launch” of the Verily product for “late 2018/early 2019,” timing that was not mentioned today. (Assuming G6 is approved by mid-year, and the Verily gen one FDA submission follows quickly, this timing seems possible.) The 3Q17 call also shared that development on Verily gen one would complete in “1H18,” while today’s call gave a broader “this year” timeline. It’s possible that FDA discussions in the past month have provided more granularity on the path ahead for G6, or perhaps that the Verily gen one system needs more work (14-day wear, fully disposable, factory calibrated, Bluetooth to smartphone). Mr. Sayer did mention that “everybody is very busy with the first Verily system” as the team works to finalize design, validate, and verify the system. As noted above, it remains unclear how the Verily gen one product will merge with the existing user base – will all users migrate over? 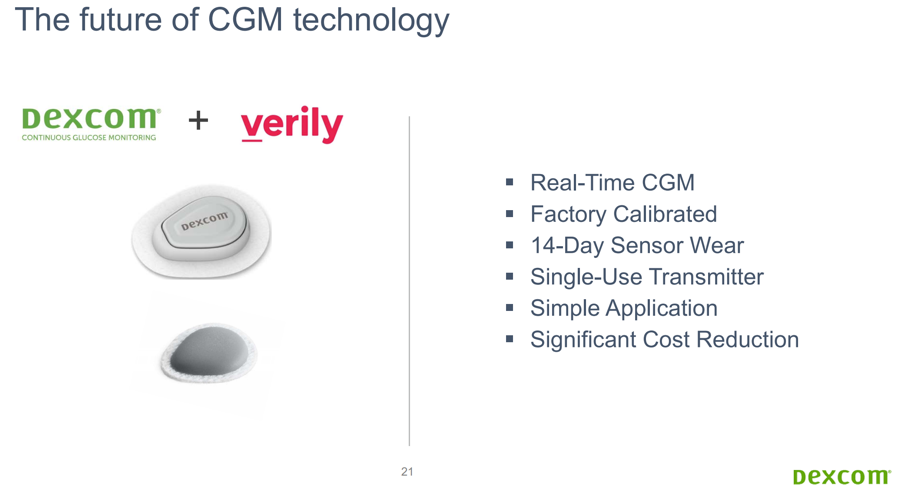 Dexcom recently updated the G5 iPhone and Android apps to add an alert schedule and more alert flexibility, responding to user feedback. While the mute override feature received mostly positive feedback, approximately 20% of users were frustrated by the inability to mute the very low alarm. The updated G5 app now lets users schedule and customize a second set of alerts – e.g., for work hours, for sleep hours, etc. A new “Always Sound” setting makes it easier to choose if CGM alerts sound when the phone is silenced or on Do Not Disturb. Finally, a new alert status icon helps a user know whether regular or scheduled alerts are set to make sound or are set to silent. The updated apps have fairly mixed reviews – the iPhone version has 2.7/5 stars (426 ratings), while the Android version has 3.2/5 stars (263 ratings). In looking at the histogram of reviews, there is a bimodal distribution – many five-star reviews and many one-star reviews. Again, this is a reminder of the burden of maintaining class III medical device apps, alongside sky-high user expectations for products to work perfectly across a growing spectrum of phones and operating systems. We are glad to see Dexcom continuing to improve the app, and its compatibility on iPhone, Android, and wearables is ahead of both Medtronic and Abbott.

The following Dexcom R&D partners were succinctly mentioned at various points during the call, though there were no updates on product details or timing. We include quotes and links to recent coverage/timing updates below.