This morning, J&J announced that it has received a binding offer from Platinum Equity, a leading private investment firm, to acquire the LifeScan BGM business for ~$2.1 billion. J&J’s acceptance period for the proposed offer will end on June 15 (unless extended), and if it is accepted, the transaction would be expected to close by the end of 2018.

Based on the Platinum Equity press release, current LifeScan President Valerie Asbury will continue leading the business following the change in ownership. The goal, according to Platinum Equity Partner Jacob Kotzubei, is to “create a global standalone business and set the stage for continued investment in growth and innovation.” In other words, it sounds a lot like what Panasonic/KKR has done with Bayer’s Diabetes business (Ascensia). We’re not sure if Platinum Equity’s ultimate plan is to turn the LifeScan business around and resell it, or to operate it indefinitely – see our list of questions below. LifeScan does not expect changes to the OneTouch products or availability, presumably in the near-term.

The ~$2.1 billion proposed valuation represents a 1.4X multiple on LifeScan’s 2017 net revenue of ~$1.5 billion, which is actually a premium on the 1.0X multiple that Panasonic paid for Bayer’s Diabetes Care business three years ago (a ~$1.2 billion acquisition on ~$1.2 billion in previous year’s sales). The proposed offer is arguably a low multiple, considering LifeScan’s brand name, 20 million patients served globally, and reach in 90 countries. Indeed, the price is ~30%-50% lower than the January rumor (Reuters) of a $3-$4 billion offer from Chinese bidders to acquire LifeScan.

We’ve been expecting this news since January 2017, when J&J first announced it was exploring strategic options for the LifeScan/Animas businesses. J&J subsequently announced in October it was shutting down Animas and exiting the pump market. While the long-term impact of this Platinum/LifeScan deal is unknown and has a fair amount of uncertainty, it’s a positive that the BGM business will at least continue – rather than shutting down completely like Animas.

Platinum is a big private investment player, but less experienced in healthcare. Its portfolio includes 30+ operating companies with $22+ billion in annual revenue, and the firm has completed 200+ acquisitions since 1995 – see this slide deck. Platinum specializes in “M&A&O” – acquiring and operating companies, with an “intensive” focus on operations and execution. The company has raised five investment funds of increasing size since 1995, now with $13 billion under management (half of that raised in 2016). Platinum Equity seems seasoned and very capable as an operator, though it does not have a serious healthcare track record. The current fund is focused on “digital transformation,” which certainly applies to LifeScan. Platinum has handled corporate divestitures for many big-name companies, including GE, IBM, and Philips.

Today’s announcement did not mention OneTouch Via (formerly Calibra Finesse), and we confirmed that J&J is continuing its strategic evaluation of this asset – we think it has tremendous upside, especially for players in insulin delivery (e.g., BD, Insulet, Lilly, Medtronic, Novo Nordisk, Roche, Sanofi).

We wish the story had played out differently for J&J in diabetes devices – LifeScan was hit hard by competitive bidding in the US, CGM has reduced the number of high-frequency BGM users, and Animas did not execute on automated insulin delivery. This news speaks to the challenges in diabetes devices, where a company as renowned as J&J had a hard time making it work. What can Platinum Equity and other companies learn for the future of BGM?

Platinum is inheriting a challenged J&J LifeScan business, particularly in the US. LifeScan/Animas sales were $1.6 billion in 2017, down 38% from the worldwide peak of $2.6 billion in 2011. Over that time, US sales have declined 53%, now running at half the size of the 2011 US business. It will be interesting to see how Platinum approaches the US vs. OUS markets and where it invests in the business vs. pulls back.

Below, we include more details on Platinum Equity, a SWOT analysis of LifeScan’s business, a non-exhaustive list of M&A deals in diabetes devices, and our long list of questions.

Who is Platinum Equity?

The State of J&J’s LifeScan Business 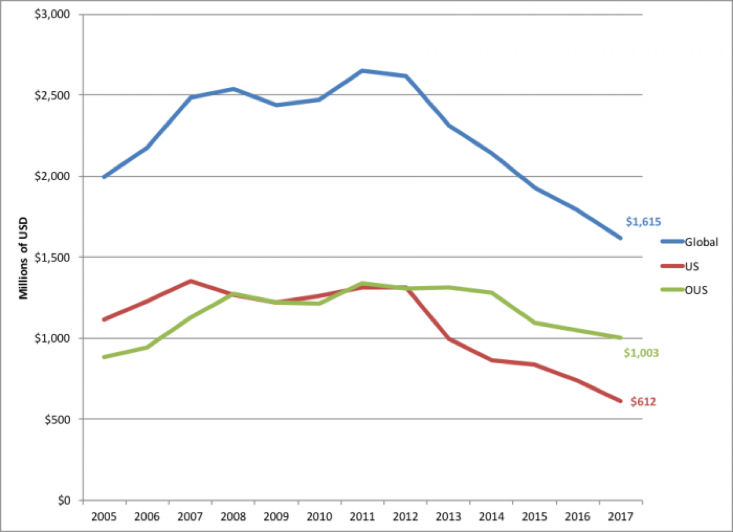 Q: What does this mean for the mid- and long-term future of LifeScan, including sales and marketing investment and innovation? Will LifeScan receive more investment than it has recently at J&J? Where will Platinum focus its investment within the LifeScan portfolio – will R&D increase or decline? Will it simply improve efficiency?

Q: What are LifeScan’s profit margins right now? How much cash is the business generating? How much could it generate with the right investment?

Q: What does this mean for the BGM landscape and competition – will LifeScan return to its former peak and receive the investment it needs? How will LifeScan in three years compare to Ascensia (formerly Bayer Diabetes Care)? Will the LifeScan business be larger in three years than it is today? Will it be more profitable? Will it have more innovative products and new business models?

Q: What other offers came in, if any? Why did J&J choose Platinum Equity over a diabetes company or a healthcare company?

Q: What will be the future of OneTouch Via (formerly Calibra Finesse)? Will an insulin delivery company give this the investment it needs to launch?

Q: Beyond Valerie Asbury, how much of the current LifeScan leadership will move over to once the acquisition is completed?

Q: Has Platinum been successful in healthcare? Will its experience operating many non-healthcare companies be an asset? Over the past 22 years and 200+ acquisitions, what are Platinum Equity’s biggest successes? What are its biggest failures?

Q: Will Platinum operate the LifeScan business for some period of time, but ultimately sell it to a diabetes/healthcare company? If that is the plan, will it change the scope of investment or how it runs the business?

Q: Will LifeScan be more nimble under Platinum? Will it be more open to partnerships, especially in digital health?

How does this compare to other M&A in diabetes devices over the past 20 years?

This list below is not exhaustive – let us know what we missed!

*Financial terms were not disclosed, though these deals were all acquisitions of small companies.