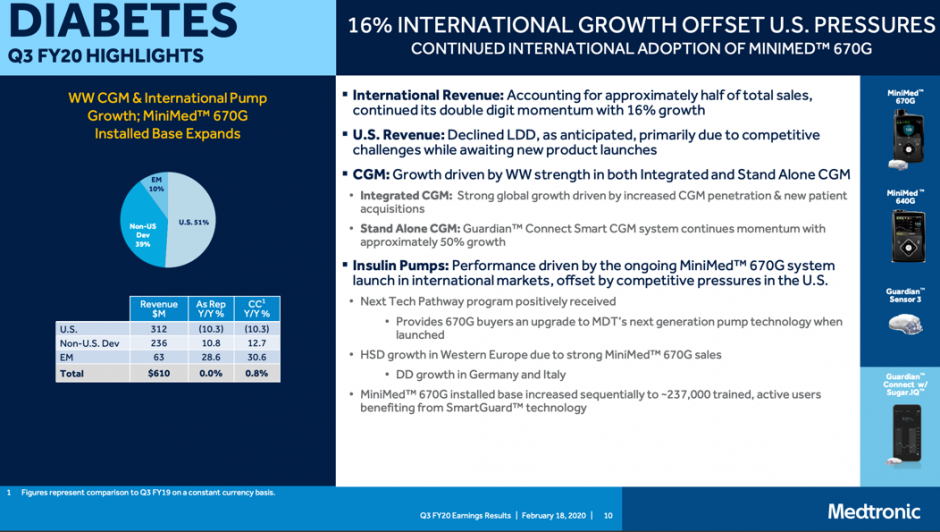 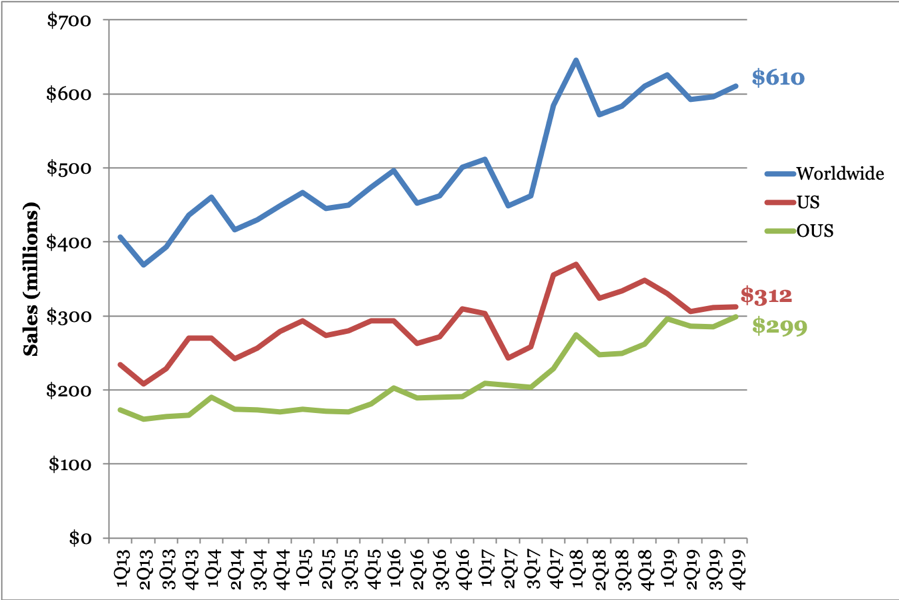 Medtronic reported worldwide Diabetes revenue of $610 million in 4Q19, flat YOY as reported (+1% operationally) on an easy comparison to 5% YOY growth in 4Q18. Growth during 4Q18 and 3Q18 last year came from high demand of the MiniMed 670G. Medtronic Diabetes continues to do well in international markets (+14% YOY as reported, +16% operationally) as 670G continues to see adoption. However, demand for 670G domestically has leveled off, partially due to strong competition from Tandem’s Control-IQ, Insulet’s Omnipod Dash, Dexcom’s G6, and Abbott’s FreeStyle Libre. Sequentially, revenue rose $14 million (+2%) from 3Q19. The standalone Guardian Connect CGM (not sold as part of 670G) continues to be a bright spot, seeing approximately 50% growth YOY. Medtronic’s Diabetes revenue has stayed fairly steady around $600 million for the past nine quarters now (see graph above). 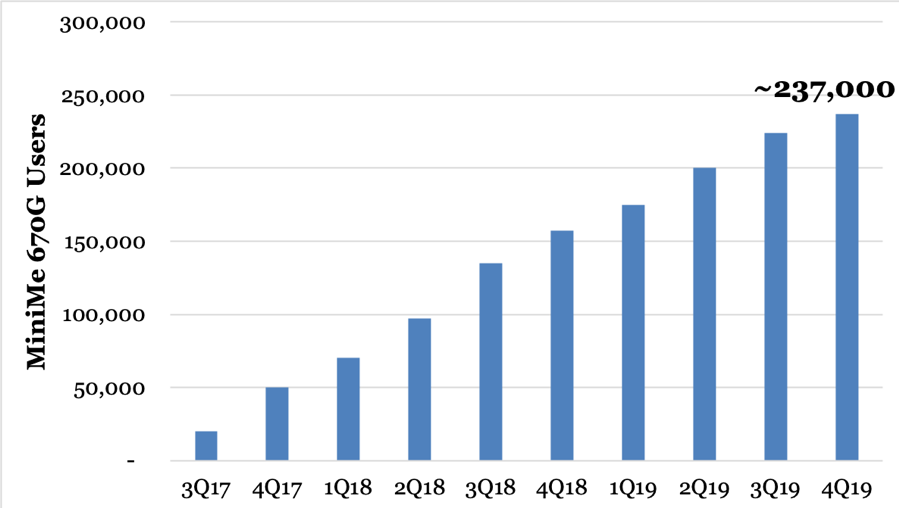 Medtronic’s slide deck (#10) for 4Q19 shows that MiniMed 670G’s trained, active user base is up to “~237,000,” up ~6% sequentially from “approximately 224,000” users in 3Q19. The ~13,000 sequential patient additions in 4Q19 represent the lowest absolute sequential increase recorded, albeit on a growing base. With the launch of MiniMed 780G expected later this year than planned (and no way to upgrade 670G pumps to the 780G algorithm), we expect demand to slow significantly. That said, Medtronic is still a favorite for many HCPs, and there are certainly reports of too much demand for Tandem to handle (they also don’t compensate educators for training as other pump companies do). Many HCPs like the Carelink system “and all the data in one place” – this may change as time goes on. Although we understand that desire for “all the data in one place,” we do point out that each company makes it more than possible for each patient to have the data. How to share it is where the conversations get a little messier; while we see why each doctor would want each company to finance making the data free and simple to use for every HCP, we also think it’s important to recognize that doing so happens at a cost. Still, Medtronic is losing out in our view by not having data open at least to Apple Health – for any patient on Medtronic, they are unable to use, for example, popular apps like “UnderMyFork” etc. like patients using Dexcom and Senseonics can.

Medtronic is now guiding for “flat to down low single-digit” operational results for Diabetes in 1Q20 (F4Q20). Conservatively assuming Diabetes revenue in 1Q20 (F4Q20) stays flat YOY, FY20 annual revenue would come in at ~$2.4 billion (+1% YOY as reported), on the low side of 3Q19 expectations for “low single-digit” growth in FY20 and well below start-of-the-year guidance for 6%-8% YOY growth in FY20. Notably, Mr. Martha mentioned on the call that Medtronic is susceptible to fluctuations late in the quarter due to large orders coming at the end of the month. This phenomenon “stresses” company operations and “makes it difficult to mitigate headwinds that pop up within the quarter.” The company plans on changing its internal operations metrics by adding an extra week in 1Q20 to help mitigate this effect. It’s unclear how much this will affect Diabetes revenue.

4. No Mention of Class I Recall on MiniMed 600 Series Insulin Pumps

Of note, there were no mentions on today’s call about the FDA’s identification of a class I recall for MiniMed 600 series insulin pumps last week. While we’ve seen quite a bit of commotion around the FDA’s notification (understandably so), Medtronic has downplayed the risk of harm from potential pump malfunctions. As of January 13, Medtronic had received 26,421 device malfunction complaints and was aware of 2,175 “injuries” and one death – this is since 2016, which most reports don’t include. We’ve asked what the number of reports is since November (far more relevant) and for many days, we haven’t received a clear answer on this. However, Medtronic told us that “most” of the injuries did not require any medical intervention and that a causal relationship between the one death and the pump malfunction could not be made (though it also could not be excluded). The issue causing the recall is the same one that caused Medtronic to issue an “Urgent Field Safety Notification” in November due to incidences of the pump reservoir becoming loose when the retainer ring was broken or missing. At the time, Medtronic gave us a predicted rate of the issue “occurring and causing harm” as “less than 0.01%” – the company has since clarified that this refers to the risk of “serious harm” occurring from a pump malfunction. Medtronic is currently working on gathering and validating the number of “serious harm” incidents (e.g., hospitalizations due to severe hypo or DKA) and will release a statement to clarify the risk of the issue. Fortunately, class I recalls are rare for diabetes devices – the most recent that comes to mind relates to an issue with Dexcom G4 and G5 receiver speakers in 2016.

Editor’s note, February 20, 2020: Regarding the FDA safety warning associated with the 630G and 670G, Medtronic got back to us after reviewing the 26,421 complaints in the US potentially related to the retainer ring on the pump. Of these, less than 10%, or 2,175, were also potentially associated with high or low blood glucose events, of which 94% (2,045) were self-remedied by the patient and required no medical intervention. This suggests that 130 required medical intervention of either an ambulance visit or a visit to the hospital or checking into the hospital, likely for severe hypoglycemia or DKA, though it could be other things. Since that is since 2016, we felt that record was very positive - far less than 1% of the complaints required any medical intervention. There was one death in the US reported by Medtronic, the cause of which they could not determine and therefore could not be excluded for consideration - we also don’t have a comment on it except to say that since so few problems arose that were “real” complaints, the chance that the death was associated with a problem with the pump seems unlikely (we stress it’s not for us to say, however, and this is speculation).

For the first time, management confirmed that MiniMed 780G is now expected to launch after FY20 (April 2020), though the device has already been filed for CE-Marking in Europe. Adult clinical data is expected for FDA submission in March and pivotal data will readout at ADA 2020. Last quarter, we also learned that the “hardware” of the device had already been submitted to the FDA. In the past, management had regularly affirmed that 780G was “on track” with longstanding plans to launch by April 2020 (3Q19, 2Q19, ADA Analyst Briefing, 1Q19, JPM, 4Q18, 3Q18); however, based on pivotal trial timing and the announcement at JPM 2020 that the pivotal trial had finished recruiting and results would read out at ADA 2020, this launch timing seemed increasingly unrealistic. It is still unclear from today’s comments whether 780G will launch first in the US or Europe, though given that 780G has already been filed for CE-Marking (before the new European Medical Device Regulation rules take effect in May), it seems likely that a CE Mark will come before FDA approval. However, during Q&A, new President of the Diabetes Group Sean Salmon expressed that meetings with the FDA have been positive, characterizing them as “very interactive” and stating that Medtronic had another a scheduled meeting sometime later this week. The 780G pivotal study is “single-arm”, with “150 patients … ages 14+.” Approval for “adults” is expected to come first (unclear if that’s 14+ or 18+ years), with pediatric approval following (7+ years). On ClinicalTrials.gov, the study has a primary completion date of January 31, 2020 and is enrolling for 7-75 years of age. Given Guardian Sensor 3 is already FDA approved and the pump hardware is already under FDA review, the 780G is the final component needed to be submitted for regulatory approval. 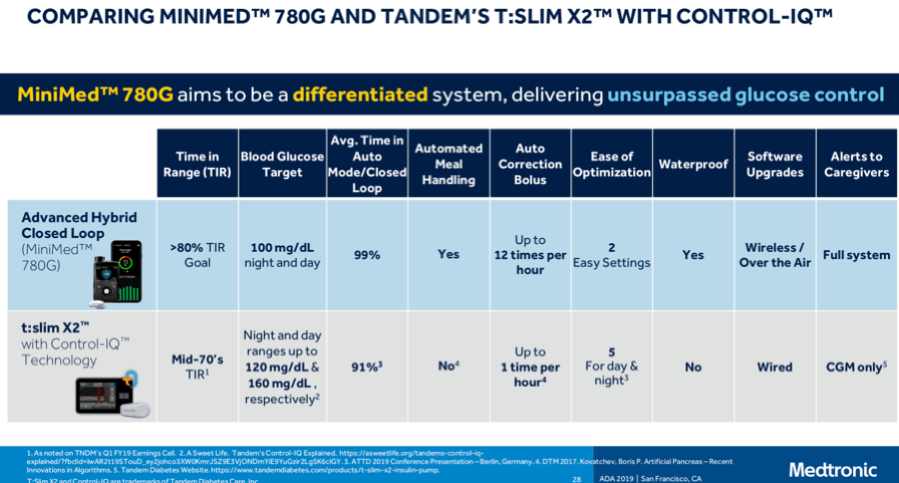 2. CGM a Priority for Medtronic, “Confident” in iCGM for Zeus; No Updates on Non-Adjunctive Guardian Sensor 3 or Next-Gen Synergy

During Q&A, Diabetes President Mr. Sean Salmon mentioned that Medtronic was “de-risking” its sensor pipeline. Though standalone Guardian Sensor 3 has seen relatively strong growth (on a low base) for the past few quarters, it’s clear that Medtronic’s CGM offering lags significantly behind its competitors in Dexcom, Abbott, and Senseonics. Dexcom and Abbott, in particular, are seeing hypergrowth of their devices and quickly eating up market share – the two companies have a combined user base of ~2.5 million people. Mr. Salmon stated he was  “confident” in the company’s ability to meet iCGM standards, likely for the Zeus CGM; more information will be shared at the company’s Analyst Day in June. With Medtronic’s CGM offerings mentioned on both of the company’s last updates (JPM 2020 and today’s call), it’s clear that CGM is increasingly a priority for Medtronic. Whether this results in any accelerated timelines remains to be seen. While Medtronic’s Synergy CGM (launch by ADA 2021) will be a significant upgrade from Guardian Sensor 3 and Zeus, it will remain behind current offerings from Abbott and Dexcom in certain respects. 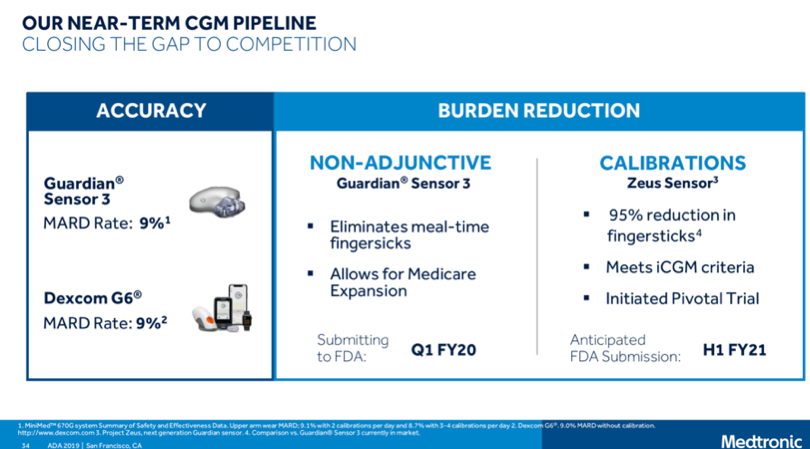 Outside of CGMs and MiniMed 780G, there were no updates on the rest of Medtronic’s Diabetes pipeline.