This morning, Tandem announced FDA approval and commercial launch of its long-awaited t:slim X2 insulin pump with integrated Dexcom G5 CGM (via Bluetooth). The approval comes in time to hit the previous “summer 2017” timeline, and marks an ~6-month FDA review following submission earlier this year. Launching on the day of the announcement is quite impressive, considering the prior plan was to do so “within 30 days of approval.”

In outstanding news (and as expected), Tandem’s 12,000+ current t:slim X2 customers will be able to software update their pumps from home and add G5 integration for free – nice! Individual emails are being sent directly to t:slim X2 users with instructions on how to perform the update. We assume this will happen quite quickly. We saw a demo at Tandem’s ADA media day and were very impressed with the speed and straightforward update process.

This news is a major win for Tandem’s current users, who get rapid access to a very meaningful product update, as the current t:slim G4 lacks remote monitoring, does not have Dexcom’s more accurate Software 505 algorithm, and does not enable use of Bluetooth. Of Tandem’s total ~57,000 users, ~80% are not on the t:slim X2, meaning the prior upgrade program is in place – customers can move from the original t:slim or t:slim G4 to the X2 for $399-$799. This is a favorable deal relative to Medtronic’s 630G/670G upgrade path, which charged customers $3,100 or $599 (depending on pump purchase date; most fell into the $3,100 bucket).

The approval is a significant business win for Tandem and a critical competitive advantage in a dynamic insulin pump market. This pump is the first to launch with Dexcom G5 integration – Animas’ OneTouch Vibe Plus was approved in the US and Canada as of last December, but has not yet launched – and allows Tandem to finally show the power of remote software updating pumps from home (Mac and PC compatible). G5 integration is the first key innovation to leverage the Tandem Device Updater, escaping the challenging four-year hardware replacement cycle that can no longer keep up with diabetes innovation (particularly in the faster-moving CGM field). We expect to see all insulin pump companies move to this remote software update model, though Tandem has done the hard work to get there first.

This milestone might also help de-risk the regulatory path for Tandem’s upcoming predictive low glucose suspend (PLGS) product, which just started its pivotal study and is expected to launch in summer 2018 – the only difference between t:slim X2/G5 and PLGS is the addition of the straightforward PLGS algorithm. Obviously getting the G5 piece and the Device Updater through the FDA at this point lays critical groundwork for the PLGS product.

Not missing a beat, Tandem has already updated the t:simulator app with the X2/G5 user interface, and we’ve included screenshots below. G5 data on the t:slim X2 seems to have a pretty identical interface to the previous G4 iteration, including the Dexcom sensor graph, number, and trend arrow on the home screen. Insulin-on-board is still on the home screen right under the CGM graph, which should help prevent insulin stacking in a non-adjunctive CGM era. We assume patients can calibrate on either the G5 mobile app or pump, and the other will update just like using the standalone receiver (the transmitter has the brains). When CGM is turned off, the t:slim X2 pump removes the graph and puts the Bolus & Options buttons back in the center.

Read on for more on the pump, competitive implications, screenshots, and our questions. 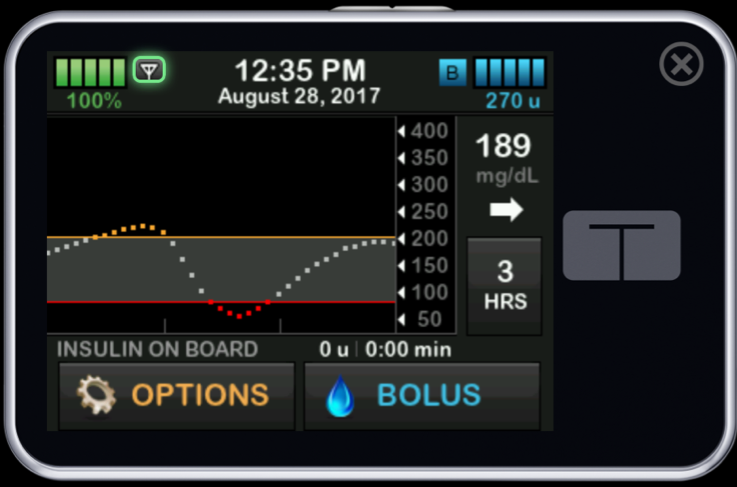 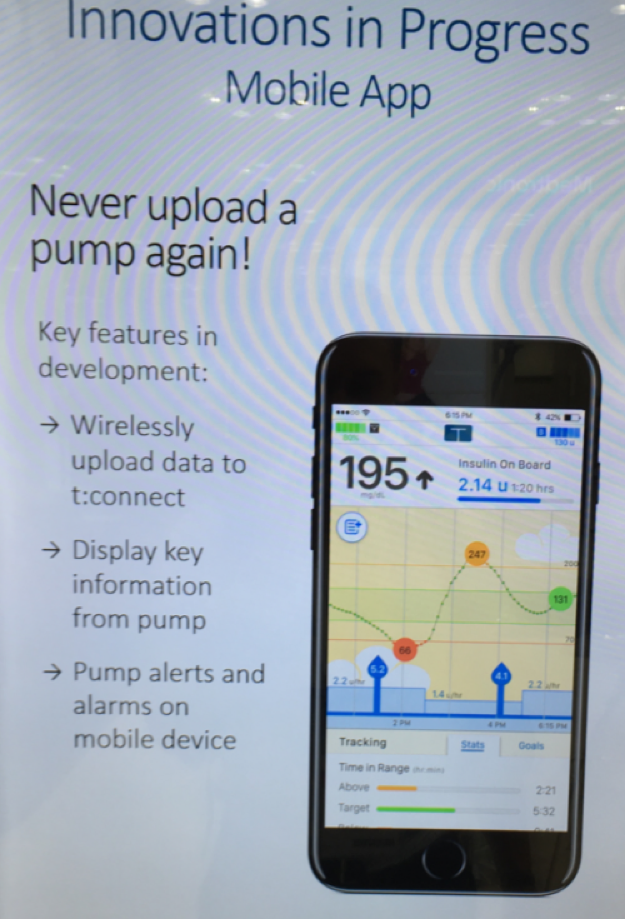 Q: Will the t:slim X2 with G5 significantly boost Tandem’s sales in 2H17?

Q: What percentage of Tandem users currently use Dexcom’s G5?

Q: Will patients and HCPs appreciate the power of remote updating the pump to add CGM integration? Will more/all pump companies move to this model over time?

Q: Will this approval drive current Dexcom MDI users onto the t:slim X2?

Q: When will Tandem launch a mobile app to pair with the t:slim X2? What about a Watch app? How far away is an FDA-approved app for remote bolusing from the phone or Watch?