As expected, Amarin announced FDA approval of its CV label expansion for Vascepa (icosapent ethyl), in addition to the drug’s prior indication for adults with severe hypertriglyceridemia (≥500 mg/dL). The new label specifies Vascepa as an adjunct to “maximally tolerated statin therapies” to reduce the risk of MI, stroke, coronary revascularization and unstable angina requiring hospitalization for adults with elevated triglyceride levels of ≥150 mg/dL and either (i) established CVD; or (ii) diabetes and two or more additional risk factors for CV disease.

Consequently, Vascepa can now be used for both those with established CVD (secondary prevention) and those with diabetes and risk factors (primary prevention). Of note, CV death – a component of the composite 5P-MACE primary outcome from the REDUCE-IT CVOT – was not included in the expanded indication, though it was listed as part of the full REDUCE-IT results on the label. As a reminder, Vascepa demonstrated a 25% relative risk reduction with Vascepa vs. placebo on the primary endpoint of CV death, MI, coronary revascularization, or unstable angina during the trial.

CEO of Amarin Mr. John Thero communicated the clinical practicality of the new label’s phrasing during the company’s webcast this morning, noting the high level of ‘prescriber leeway’ allowed by the label. He stated, “In completing this label, we saw wording that could be clearly and efficiently used in medical practice. As such, the label uses shorthand terminology such as established cardiovascular disease and general references such as two or more risk factors for cardiovascular disease. This deliberate phrasing enables broad use in physician discretion.” In particular, management hinted at less stringent interpretation of three key indication points: (i) risk factors of CVD; (ii) minimum triglyceride levels; and (iii) statin usage.

According to Amarin’s Chief Medical Officer Dr. Craig Granowitz, approximately 12 million of the 38 million statin-taking patients in the US have triglyceride levels of ≥150 mg/dL, and more than half of those patients are also estimated to have established CVD or diabetes and multiple other CVD risk factors. We take this direct patient population of ~six million to be a conservative estimate, considering that >50 million American adults have triglyceride levels of ≥150 mg/dL. These numbers reflect a substantial uptick from the two to three million US adults with triglycerides ≥500 mg/dL previously indicated for Vascepa usage.

Financially, Amarin increased its year-end guidance for total net revenue from $410 to $425 million following the approval. Similarly, predicted net revenue for 2020 increased from $650 million to $700 million, primarily driven by sales of Vascepa in the US.

Vascepa in the News

The regulatory decision follows a unanimous vote for Vascepa’s CV indication at a mid-November FDA Ad Comm meeting. While all sixteen panelists agreed that results from REDUCE-IT support an indication, only ten expressed support for use of Vascepa in both primary and secondary prevention populations, while five voted for sole use in secondary prevention, and one member remained undecided. 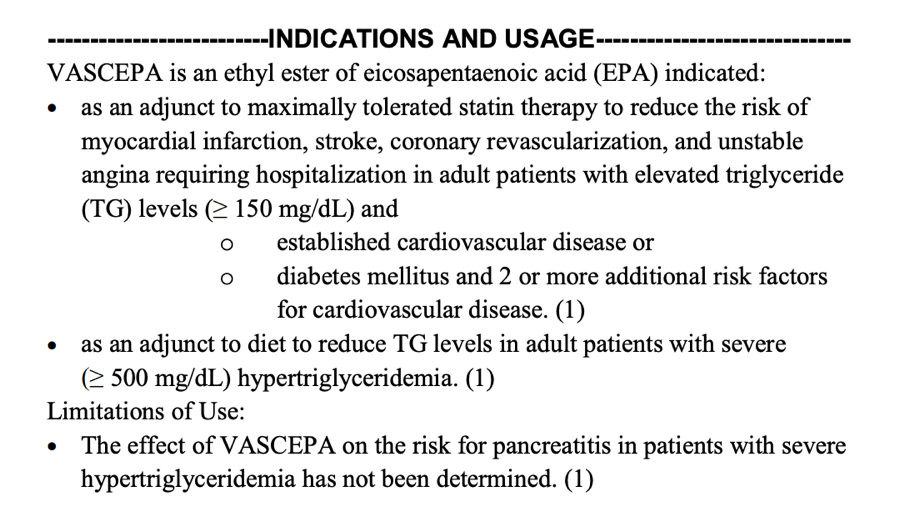