This morning, Abbott announced that it received CE Mark for its 14-day wear, factory calibrated FreeStyle Libre Flash Glucose Monitoring system. The timing is right on par with the company’s 2Q14 call and marks less than one year since the novel glucose monitoring product concept was unveiled at EASD 2013. FreeStyle Libre will be available in France, Germany, Italy, the Netherlands, Spain, Sweden and the UK in the coming weeks. It will also be available for purchase online through a website in each market (Abbott already has the website www.freestylelibre.co.uk running, though US users cannot access it).

We assume the product will not launch with significant reimbursement, and that once more real-world clinical studies are completed, Abbott would work to secure reimbursement from European payers. We believe the value of the product will be significant as strong adherence should help outcomes, perhaps dramatically (early users in the EU with whom we have spoken love it and say their patients look at it frequently, which prompts greater success in numbers).  FreeStyle Libre is approved in Europe for anyone with diabetes; however, we expect the initial focus to be on insulin users, especially on MDIs whether they are type 1 or type 2. That said, we believe patients anywhere on the diabetes continuum (and, in fact, pre-diabetes continuum) will be able to show significant benefit. As noted in the company’s 2Q14 call, follow-on Flash Glucose Monitoring products will target other segments of the market.

Through conference updates over the past year (EASD 2013, DTM 2013, IDF 2013, and ATTD 2014), Abbott has given us an excellent feel for the system, and there are few additional details in the press release beyond what we’ve already reported (see first bullet below). The announcement emphasized the product’s factory calibration (and by association, insulin dosing claim), a significant advance that eliminates the need to calibrate the sensor with fingerstick readings in most cases – this is a particularly impressive engineering and manufacturing feat given the 14-day wear. Similar to the FreeStyle Navigator’s label, however, FreeStyle Libre readings will need to be confirmed with a fingerstick in a few specific cases: during times of rapidly changing glucose levels; if hypoglycemia/impending hypoglycemia is reported by the system; or when symptoms do not match the product’s readings. Details from Abbott’s CE Mark study, including accuracy data, will be shared in its upcoming EASD symposium on September 15 (available via webcast). In prior studies we’ve seen, the 14-day, factory calibrated sensor has demonstrated an MARD of ~9%-11% (see below).

Given the low current rates of CGM penetration worldwide, we are optimistic that this new glucose monitoring category can help patients monitor more frequently; help make clinicians’ lives easier; and help save the healthcare system money in the long-run. There is no current timeline on a US submission, though Abbott management has said that FreeStyle Libre will be a global product, and it will come to the US. The major question in the US concerns obtaining an insulin dosing claim, something Dexcom is also discussing with the FDA. 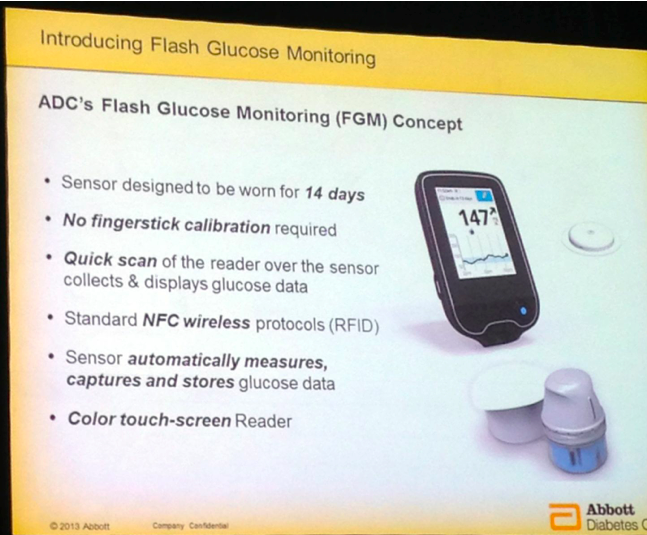 Q: How will the device be priced?

Q: In which of the seven European countries will FreeStyle Libre launch first?

Q: Is the device only approved for upper arm wear?

Q: How was the CE Mark study designed? Was it 14 days with YSI in-clinic days spaced throughout?

Q: What was the overall MARD that will be included in the label?

Q: Is the software Mac and PC compatible?

Q: When will FreeStyle Libre be submitted in the US?