1. REWIND Data, Including Consistent Effect Across Primary and Secondary Prevention Cohorts, Added to Two Sections; Trulicity Now Listed with Victoza as Only Two GLP-1 Agonists with Superiority in Large CVOTs

Data from the REWIND CVOT for Lilly’s GLP-1 agonist Trulicity (dulaglutide) is now included in sections 9 (Pharmacologic Approaches to Glycemic Treatment) and 10 (Cardiovascular Disease and Risk Management), highlighting the therapy’s 12% relative risk reduction vs. placebo on 3-point MACE (HR=0.88, 95% CI: 0.79-0.99, p=0.026). Based on these results, the ADA/EASD consensus report treatment algorithm included in section 9 now mentions Trulicity alongside Novo Nordisk’s Victoza (liraglutide) as the only two GLP-1s to demonstrate superiority vs. placebo on the 3-point MACE in large CVOTs (Ozempic’s [semaglutide] SUSTAIN-6 trial is considered a “safety” CVOT due to its smaller size). Importantly, the amendments to section 9 also include a nod to the consistent effect of Trulicity across the broad population in REWIND, noting the mounting evidence for cardioprotection with novel diabetes therapies in those without established ASCVD:  “Data from DECLARE-TIMI 58 and REWIND trials indicate that the CV benefits of SGLT2 inhibitors (in terms of reduction in the risk for heart failure hospitalization) and GLP-1 receptor agonists (in terms of lower risk of MACE) may extend to higher-risk type 2 diabetes patients in the primary prevention group.” Without a doubt, the identical point estimates for MACE reduction in those with and without established CVD (HR=0.87, 95% CI: 0.74-1.02) was one of the major headlines from REWIND, and we’re curious how this will translate to a potentially broader CV indication (currently under FDA regulatory review per Lilly’s 2Q19 update). While it will take further study, and perhaps more robust data specific to the primary prevention population, to promote SGLT-2 inhibitors and GLP-1 agonists to second-line status for all with type 2 diabetes (not just those with established ASCVD [atherosclerotic cardiovascular disease]), we’re encouraged and thrilled for patients by these updates. We believe the updates will make it much more likely that patients hear about and receive recommendations for this therapy. A rising tide should lift all GLP-1 boats, though this is definitely a very big deal for Trulicity, which just reported record 2Q19 revenue earlier this week of over $1.0 billion, $300 million than the next top-selling diabetes therapy, Humalog.

2. Victoza Recommended for Pediatrics with Type 2 if Goals Not Met with Metformin ± Basal Insulin

The ADA now recommends Novo Nordisk’s GLP-1 agonist Victoza (liraglutide) be considered in combination with metformin for children over age 10 if glycemic targets aren’t being met with metformin and/or basal insulin, as long as there is no family history of medullary thyroid carcinoma or MEN2 (multiple endocrine neoplasia type 2). This follows FDA’s approval for Victoza in pediatric type 2 based on results from the phase 3b ELLIPSE trial. As a reminder, Victoza conferred a meaningful 1.1% treatment difference on A1c (-0.64% from baseline 7.8%) versus placebo, which grew to 1.3% after 26 additional weeks of open-label treatment. However, there was no impact on weight, which is surprising to us (but sometimes in randomized controlled trials the “control” group does much better than it otherwise would). Liraglutide is the first non-insulin medication approved for pediatric type 2 in the past two decades, and now joins metformin and insulin as pharmacologic treatment options. Doubtless, this is a massive step forward for the prevention of down-the-line CV, renal, and microvascular complications, which are more likely to develop in those diagnosed with type 2 at a young age according to TODAY2 follow-up data at ADA 2019. That said, there’s far more to be done; we’re hoping this new addition to the Standards promotes more research and innovation in prevention and treatment options for children and teens with type 2.

Following the Diabetes Care publication at ADA, The Standards of Care have been updated to add time-in-range goals, standardized CGM metrics, and recommended use of the one-page Ambulatory Glucose Profile (AGP) report to analyze CGM data. The additions have been made to the Glycemic Targets and Diabetes Technology sections of the standards of care. This is extraordinary progress for the CGM field and BeyondA1c movement – especially getting time-in-range in the section on glycemic targets! Most current CGM users will fall in the first column in the graphic below, where the time-in-range goal is >70% for type 1 and type 2 diabetes, with <4% below 70 mg/dl. To our knowledge, the redesigned AGP report has not yet been incorporated into any CGM download’s software - yet. The race is on, however, and we hope it happens soon – life is hard for doctors in light of multiple demands, heightened workflow, very weak reimbursement in many parts of the US – at least AGP should be taught and should be as easy as possible for doctors and nurses and patients to see and understand. We were impressed with the exact language put into the Standards of Care and we’ll be eager to get KOL feedback based on this: “To make these metrics more actionable, standardized reports with visual cues, such as an ambulatory glucose profile, may help the patient and the provider interpret the data and use it to guide treatment decisions.” 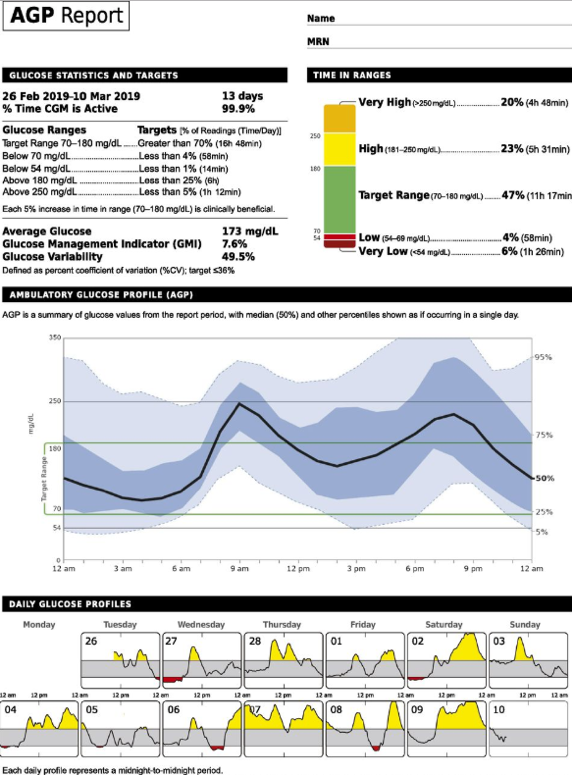 4. Tipping Our Hats to Departing ADA CMSO, Dr. Will Cefalu – the Visionary Behind the Living ADA SOC

We extend our deepest congratulations and thanks to ADA’s departing Chief Scientific & Medical Officer, Dr. William Cefalu, who was the visionary behind making the Standards of Care a living document. With his insight and initiative, the Standards are now able to keep up in real-time with our rapidly evolving field. An inspiring and diligent leader, we’ve also seen Dr. Cefalu speak at FDA advisory committees and numerous conferences, testify to Congress on insulin pricing, lead impactful meetings, pen multiple papers, and head the Know Diabetes by Heart Collaboration with AHA. He took the reins from Dr. Bob Ratner in February 2017; a search committee has been established to work on his replacement, we believe – Dr. Cefalu takes up reins at the NIH August 18.