In an exciting development just in time for its EASD symposia, Abbott announced this afternoon that it has received a CE Mark for FreeStyle Libre 2, a second-generation Bluetooth-enabled FreeStyle Libre sensor equipped with optional hypoglycemia and hyperglycemia alarms – a long requested improvement and key competitive move.

Users can now get low, high, and lost signal alarms on the FreeStyle Libre 2 reader, but will still scan over the sensor to retrieve a real-time glucose, trend arrow, and eight-hour history. This clever method maintains the FreeStyle Libre scanning experience, adds alarms, and presumably allows for battery- and cost-savings over traditional CGM – preserving Libre’s slim form factor, fully disposable design, and excellent pricing, a win for the system’s 800,000+ users globally (we look forward to a user base update in 3Q18, as the press release still says "over 800,000").

FreeStyle Libre 2 will launch initially in Germany with plans for subsequent rollout in Europe “over the coming months.” The system comes with a new blue reader (pictures below), where patients can set threshold hypoglycemia alerts ranging from 60-100 mg/dl and hyperglycemia alerts ranging from 120-400 mg/dl, as well as when the signal between the sensor and the reader is lost. In any of these cases, the reader will emit a sound or vibrate (user preference), prompting a manual sensor scan to observe the real-time glucose and trend. The sensor still reads glucose every minute, but as we understand it, the Bluetooth signal is only turned on in the case of an alarm – e.g., sensor detects a high glucose. FreeStyle Libre 2 users will be guided through the optional alarm setup on the new reader and it looks very easy.

Strikingly, FreeStyle Libre 2 will be offered at the same cash-pay price as the first-gen system – ~60 euros per 14-day sensor and ~60 euros for the reader. Given the addition of Bluetooth, Abbott is obviously making a significant investment by going with price parity, a decision we enthusiastically applaud and that will serve it well relative to Dexcom’s more expensive G6.

Notably, both FreeStyle Libre generations will be offered within each market as the new system becomes available. In other words, patients will now have the option of alarms, but won’t be forced to upgrade to the new system if alarms are not of interest. We imagine that many type 1s will go for the new system with optional alarms, with perhaps some waiting until FreeStyle LibreLink app integration is available. There may be pent-up demand for FreeStyle Libre 2, as DIY add-on solutions to Libre – e.g., Ambrosia BluCon, Miao Miao – have come onto the market.

Like gen one, the 14-day wear, 1-hour warmup FreeStyle Libre 2 requires no fingersticks and is approved for non-adjunctive use in those four-years and up. Notably, it has improved accuracy: a 9.5% MARD vs. YSI and 100% of the results within Zone A and B of the Consensus Error Grid. To compare, the FDA SSED for the just-FDA-approved 14-day FreeStyle Libre reports an MARD of 10.1% vs. YSI (label says 9.4%), while the EU pivotal trial for FreeStyle Libre gen one demonstrated an 11.4% MARD vs. BGM. We’ll be interested to see FreeStyle Libre 2’s MARD broken down by glucose range, especially for accuracy in hypoglycemia – the 14-day Libre in the US is currently reported at ~38%-53% of points within ±15 mg/dl for <80 mg/dl (below the iCGM special controls benchmark of >85% of points within ±15 mg/dl for <70 mg/dl), and FDA reports a false hypoglycemia notification rate of 72% (Abbott’s methods finds a reduced value of 53%).

Like gen one in Europe, the FreeStyle Libre 2 reader in Europe includes a BG and ketone meter; the latter is not included in the US version. If SGLT-2s come to market in type 1 (pending approval), FreeStyle Libre’s all-in-one CGM/BG/ketone monitoring could make it a go-to device.

FreeStyle Libre 2 will be featured at EASD during Abbott’s corporate symposium, taking place today from 2:30-5:00 PM, as well as at the Abbott exhibit hall booth. The symposium will focus on FreeStyle Libre 2’s improved accuracy and the importance of optional alarms. We’ll return with more insights from that.

Abbott’s Next Steps and Future Directions

While FreeStyle Libre 2 will initially launch with alarms on the new reader only, Abbott told us that FreeStyle LibreLink app compatibility (Android and iOS) should be available in the next six months. We imagine that caregivers will also be able to receive low/high alerts via LibreLinkUp once this next iteration rolls out. Allowing for enhanced remote monitoring would certainly be an attractive option for many, especially parents of young children who may be weighing the merits of other CGMs.

Although specifics were not provided, we can safely assume that FreeStyle Libre 2 was a meaningful investment on Abbott’s part. The added manufacturing cost of inserting a Bluetooth chip alone certainly adds cost to low-priced system. The fact that FreeStyle Libre 2 will still be offered at the same price point is significant and speaks to Abbott’s outstanding commitment to global access and responsiveness to patient (and perhaps payer) input. Moreover, management shared that the new generation device required additional modifications to the sensor chemistry and manufacturing, adding further investment and potentially increasing short-term production cost.

How will FreeStyle Libre 2 change the CGM competitive landscape? The head-to-head, investigator-initiated iHart CGM study (n=40) found Dexcom’s G5 to be superior to FreeStyle Libre in reducing time in hypoglycemia (<60 mg/dl) in a higher-risk, CGM-naïve study population (type 1s with impaired hypoglycemia awareness or at least one severe hypoglycemia event in the preceding year). The decision to add alarms has certainly been long requested by some users and healthcare providers, and perhaps the iHart results played a role too. Alarms are obviously beneficial for those on mealtime insulin and sulfonylureas, where hypoglycemia and severe hypoglycemia are common and so preventable. 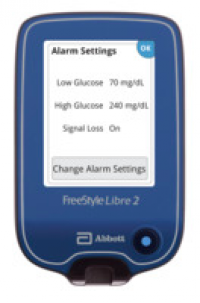 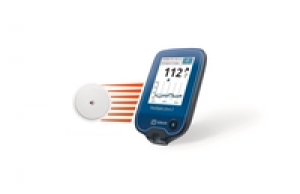