Merck provided its 2Q16 update yesterday morning in a call led by CEO Mr. Ken Frazier. Below, we include our top four highlights from the call, followed by Q&A.

2. The overall DPP-4 inhibitor class grew 8% YOY to $2.6 billion in 2Q16, with Januvia retaining the large majority (63%) of the market share by value, according to our estimates.

4. Although there was no mention of the company’s biosimilar insulin glargine candidate MK-1293, we saw phase 3 data at ADA supporting MK-1293’s non-inferiority vs. Sanofi’s Lantus.

5. According to ClinicalTrials.gov, the expected completion date for the phase 1 trial of “smart” insulin candidate MK-2640 has been delayed again to July 2016.

1. Merck’s DPP-4 inhibitor Januvia (sitagliptin) franchise grew 2% year-over-year (YOY) as reported and operationally, reaching $1.6 billion in revenue. Sequentially, the franchise grew 16%. Standalone Januvia was responsible for $1.1 billion in revenue, representing a 2% YOY growth and 17% sequential growth. Combination drug Janumet (sitagliptin/metformin) posted $569 million in sales, marking a 3% YOY increase and 13% sequential growth. By geography, US sales fell 2% YOY to $889 million (with Januvia contributing $631 million and Janumet contributing $258 million), against a very tough comparison (YOY growth was 14% in 2Q15). US sales rose 15% sequentially, reflecting a weak 1Q16. Ex-US sales rose 8% YOY and 17% sequentially to $745 million (with Januvia contributing $433 million and Janumet contributing $312 million). Management highlighted Januvia/Janumet as the company’s top pharmaceutical franchise and emphasized that the franchise continues to drive Merck’s overall business performance even 10 years after launch. Overall, management expressed confidence in the prospects for Merck’s diabetes portfolio through 2017, in large part due to reassuring growth in TRx share in the US. 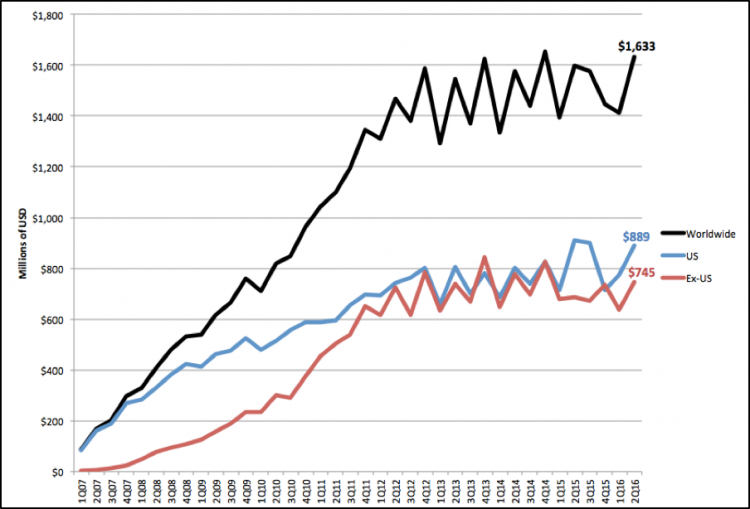 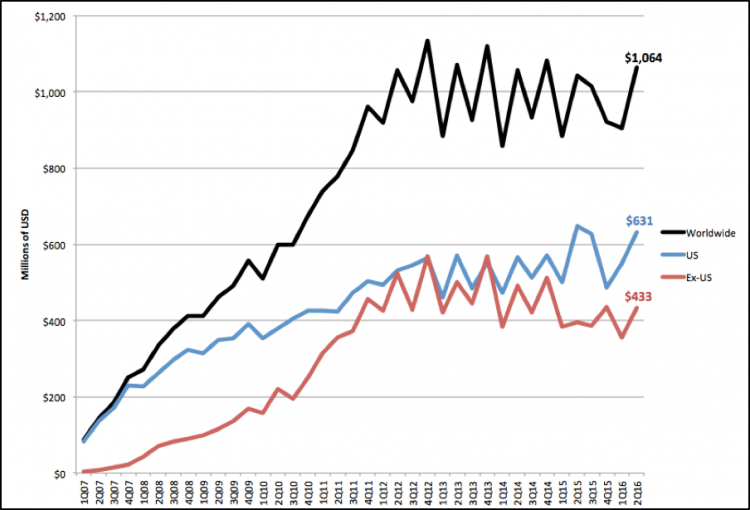 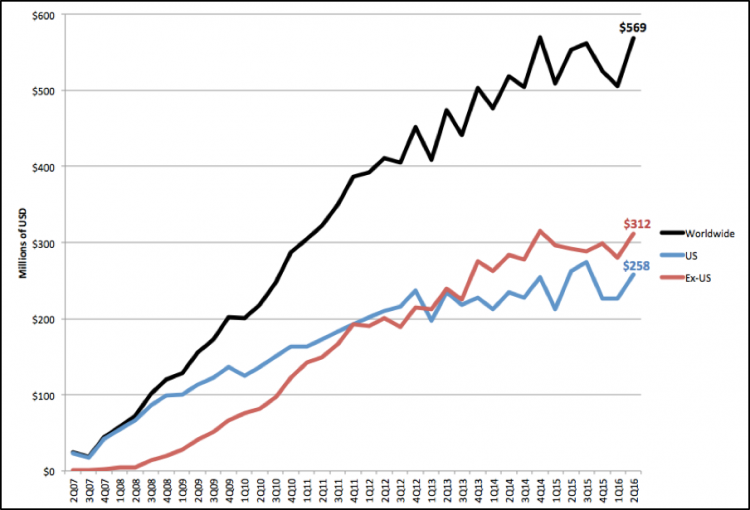 2. The overall DPP-4 inhibitor class grew 8% YOY to $2.6 billion in 2Q16, with Januvia retaining the large majority (63%) of the market share by value, according to our estimates. Sequentially, the class grew 15%, up from $2.3 billion in 1Q16. Lilly/BI’s Tradjenta (linagliptin) franchise held 13% market share by value in 2Q16, while Novartis’ Galvus (vildagliptin) held 12%, AZ’s Onglyza (saxagliptin) franchise held 7%, and Takeda’s Nesina (alogliptin) held 5%. Notably, these percentages are based on our estimates of total Tradjenta franchise sales, since only Lilly’s portion of revenue is reported publicly. We estimate Lilly’s share of revenue at ~36% based on Lilly’s reported Tradjenta franchise sales for 2015 ($357 million) and global net sales for the franchise in 2015 (€909 million, or ~$1 billion) released in BI’s recent diabetes update. All major DPP-4 inhibitor candidates experienced YOY growth in 2Q16 with the exception of Onglyza, which fell 8% YOY as reported and 7% operationally. We were glad to see class growth for DPP-4 inhibitors following several quarters of fluctuation, partially due to competition from SGLT-2 inhibitors and GLP-1 agonists and partially due to pricing pressures. AZ management pointed to this competition from newer drug classes as a key source of pressure for Onglyza during the company’s 2Q16 update earlier this week. As a result, AZ management suggested that the company will focus on positioning its SGLT-2 inhibitor Farxiga (dapagliflozin) as the preferred option for patients switching from DPP-4 inhibitors to SGLT-2 inhibitors. This commentary suggested to us that AZ is willing to cannibalize some Onglyza sales to support Farxiga growth and is perhaps inclined to prioritize SGLT-2 inhibitor products over its DPP-4 inhibitor franchise. The tradeoff is interesting – DPP-4 inhibitors have a cleaner side effect and tolerability profile but are not as potent. Presumably, they will be used more and more in fairly newly diagnosed patients. We believe DPP-4 inhibitors could be used very well in patients with pre-diabetes who are very high risk for type 2 – but we doubt this will happen anytime soon except off-label. 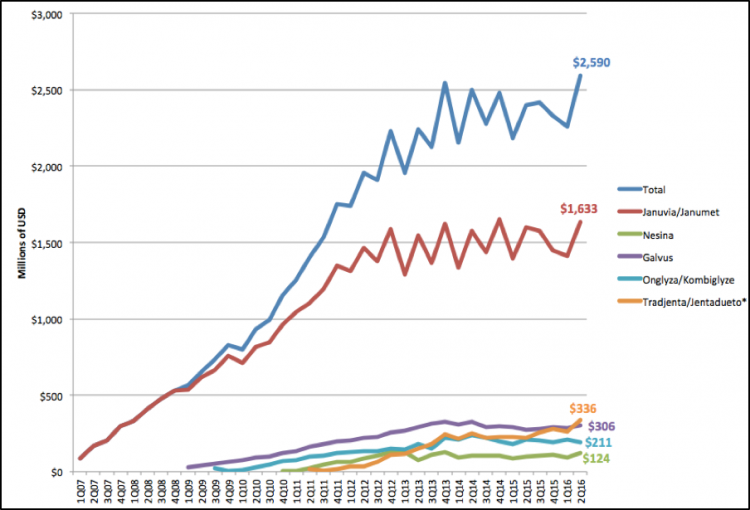 3. Merck highlighted the presentation of phase 3 data for Pfizer-partnered SGLT-2 inhibitor ertugliflozin at ADA 2016. Two trials demonstrated that ertugliflozin monotherapy lowers A1c by a significantly greater margin than placebo and that ertugliflozin plus sitagliptin lowers A1c by a greater margin than either treatment alone. The company plans to submit three New Drug Applications (presumably in the US and EU) by the end of the year – one for ertugliflozin monotherapy, one for a fixed-dose ertugliflozin/sitagliptin combination, and one for a fixed-dose ertugliflozin/metformin combination. Merck’s enthusiasm for this promising SGLT-2 inhibitor candidate, coupled with the company’s 1Q16 decision not to file once-weekly DPP-4 inhibitor omarigliptin in the US or EU for “business reasons,” is possibly reflective of a shift toward greater investment in SGLT-2 inhibitors as the popularity of the class grows. As an oral drug class with solid A1c-lowering efficacy, weight loss, low risk of hypoglycemia, and potential cardiovascular and renal benefits, SGLT-2 inhibitors are an increasingly attractive alternative to DPP-4 inhibitors for many patients and providers. We think it’s very smart of Merck to diversify its diabetes portfolio and we’re glad to see its continued commitment to diabetes as evidenced by its various pipeline products.

4. Although there was no mention of the company’s biosimilar insulin glargine candidate MK-1293, we saw phase 3 data at ADA supporting MK-1293’s non-inferiority vs. Sanofi’s Lantus. The two insulin products demonstrated highly similar therapeutic profiles in terms of A1c reduction and symptomatic hypoglycemia. MK-1293 is already submitted in Europe and we expect to see similar action soon in the US. This timing would position Merck’s biosimilar insulin glargine as third-to-market following products from Lilly/BI and Biocon/Mylan.

5. According to ClinicalTrials.gov, the expected completion date for the phase 1 trial of “smart” insulin candidate MK-2640 has been delayed again to July 2016. This is the fourth consecutive quarter that we’ve seen the trial’s timeline delayed, after it was pushed back from July 2015 to January 2016 in 3Q15 to March 2016 in 4Q15 and to May 2016 in 1Q16. There was no mention of the candidate in Merck’s 2Q16 update. We wonder if the trial might be delayed again, as the end of July is fast approaching (the ClinicalTrials.gov record was last updated on June 9). Merck’s candidate remains the only glucose-responsive insulin in clinical development, though there are early-stage preclinical candidates in the pipeline. We’re not too surprised not to see faster movement in getting these much-anticipated products through clinical development since this arena is going to be hard work ahead, though we understand this is one of the most complex areas of diabetes drug development. See our coverage of this spring’s JDRF/Helmsley workshop on glucose-responsive insulin for much more on this fascinating area.

Q: Could you paint a picture of how you see the next couple of years unfolding? Could you help frame the evolution of Merck’s revenue base and explain what key revenue contributors might offset patent expiration pressures?

A: We’re actively looking across our portfolio in order to balance near-term investments with the the need to drive long-term growth. We do anticipate some headwinds from loss of exclusivity, but we’re also pleased that we’re maintaining steady growth of Januvia as a foundation to launch products like Keytruda and Zepatier. Beyond that, we have things coming out of our pipeline. We’re looking to build our diabetes franchise with [SGLT-2] ertugliflozin. We’re actively pursuing ways to create value and grow.

A: Ex-Venezuela, we great about 6% in emerging markets, so we continue to have good growth there. If you look at China, we had 11% reported growth – albeit not as good as it was a couple years ago, but it continues to be robust. That said, lumping emerging markets together today is not a good idea because you have very different dynamics in terms of what’s occurring in a market like China vs. Russia vs. Argentina. We really do focus market-by-market to determine what our opportunities are for growth, and we titrate our expense based in each market based on opportunities. But I do believe that emerging markets will remain an important source of growth moving forward.

With regard to Januvia outside the US, we continue to see good growth in Europe and Canada, and that growth is coming from volume. The volume growth in most of those markets is very strong. I’d say the biggest issue we’re facing is the fact that our market share is so high in countries like Germany that it’s hard to grow, so we have to continue to find ways to grow from sulfonylureas and ultimately, from metformin. There’s hundreds of millions of patients with diabetes that need to be treated outside the US. We had strong, double-digit growth for Januvia in emerging markets, and I think that’s going to continue over time. We haven’t gotten NRDL [National reimbursement drug list] approval for Januvia in China yet. Once that’s achieved, I think that’ll be another opportunity for us to grow the Januvia franchise outside the US.