J&J reported 1Q18 financial results today in a call led by Mr. Joseph Wolk (VP, Investor Relations, J&J). See the press release here and the slides here. This full report is expanded from the First Look we posted this morning, just after the call wrapped up – those of you with our handy Closer Look app saw this the moment it was published! You can download our app for iPhone here.

This report is organized into Janssen pharmaceutical highlights (focused on SGLT-2 inhibitor Invokana as well as the new 2017 US Transparency Report), followed LifeScan-Animas device-side highlights. We conclude with relevant Q&A from the call.

1. Invokana Sales Drop 13% YOY in Fifth Consecutive Quarter of Decline; Revenue Falls 17% in Challenging US Market; No Commentary from Management on SGLT-2 or Diabetes

Invokana (canagliflozin) franchise sales of $248 million fell 13% YOY as reported (-14% operationally) from a base of $284 million in 1Q17. Sales of the SGLT-2 inhibitor also declined 7% sequentially from $267 million in 4Q17. These were both very easy comparisons – in 1Q17, J&J’s SGLT-2 revenue dropped 13% YOY, and in 4Q17, fell 28% YOY and was flat sequentially. In fact, 1Q18 marks the fifth consecutive quarter of YOY sales decline for Invokana and Invokamet (canagliflozin/metformin fixed-dose combination): -13% in 1Q17, -23% in 2Q17, -19% in 3Q17, -28% in 4Q17, -13% in 1Q18. These pharmaceutical products were once quite an exciting part of J&J’s pharmaceutical business, leading the SGLT-2 inhibitor market and experiencing strong growth even as J&J’s diabetes devices faced headwinds, but Invokana/Invokamet sales trends took a turn in mid-2016 and global franchise revenue has been dropping since then. The situation is particularly bleak in the US, where Invokana revenue dropped 17% YOY to $204 million in 1Q18 (from $247 million in 1Q17). Sequentially as well, US sales dipped 8% from $221 million in 4Q17. OUS Invokana revenue grew 19% YOY to $44 million, but from a much smaller base of $37 million in 1Q17. Sequentially, OUS sales dipped 4% from $46 million in 4Q17. This follows declining US sales for Invokana throughout 2017 (-17% YOY in 1Q17, -26% YOY in 2Q17, -25% YOY in 3Q17, -34% YOY in 4Q17). To be sure, these geographical trends highlight the persistent challenge of US pricing pressure, which J&J alluded to in presentation slides and which we discuss in more detail below. Ultimately, we expect that the Invokana franchise can return to growth, with support from a CV indication (this is under review at FDA with a decision expected by year-end) and from accumulating exciting data pointing to renal benefit (see press announcement here). That said, 1Q18 was another disappointing quarter for Invokana and Invokamet. 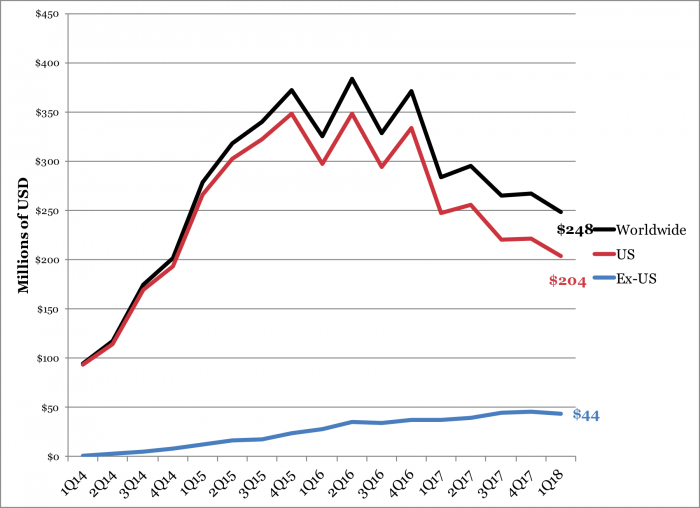 While the call contained no updates on Janssen’s diabetes/obesity pipeline, we note the recent initiation of a phase 2 trial evaluating GLP-1/glucagon dual agonist JNJ-64565111 in obesity. This 26-week study (n=440) was posted to ClinicalTrials.gov at the beginning of April, and it’s expected to complete in March 2019. Three different doses of the GLP-1/glucagon dual agonist will be compared to Novo Nordisk’s Saxenda (high-dose liraglutide for obesity) and to placebo. Co-primary endpoints include percent change in body weight (from baseline to week 26) and adverse events. Secondary endpoints will measure proportion of patients achieving ≥5% weight loss, proportion achieving ≥10% weight loss, and absolute change in body weight. We’re excited to see J&J increase its investment in obesity R&D with this clinical trial; the company has already poured resources into the Janssen Human Microbiome Institute, which is searching for earlier intervention opportunities in treating type 2 diabetes, prediabetes, and gestational diabetes (there’s a core obesity component to the Institute’s work as well). Obesity is clearly an area of high unmet need (only ~2% of 600 million people with obesity worldwide receive any sort of medical care), and GLP-1/glucagon co-agonists are showing promising weight loss efficacy. In addition to Janssen’s phase 2 candidate, Sanofi has a GLP-1/glucagon dual agonist in phase 3 for obesity (studies scheduled to begin later this year). AZ and OPKO Health each have a GLP-1/glucagon dual agonist in phase 2, and Novo Nordisk has a candidate in phase 1. Click here for our GLP-1/glucagon competitive landscape.

The table below reflects the latest updates, as far as we are aware, on Janssen’s diabetes/obesity pipeline products. Items highlighted in yellow indicate notable changes to the pipeline in 1Q18.

3. J&J Publishes New US Pharmaceutical Transparency Report; ~42% of Profits Returned as Discounts (to Patients) or as Rebates (to PBMs/Payers)

Janssen published its second annual US Pharmaceutical Transparency Report last month (home page here, pricing and patient access section here, full PDF here). Like last year, the report highlights a dramatic gap between the list price of drugs and the revenue collected by the company – in between, J&J loses money to PBMs/payers in the form of rebates, and also loses net profits through patient discount programs. Although the average list price for a Janssen pharmaceutical product grew 8.1% in 2017, the average price realized by the company declined 4.6%. According to the report, J&J spent ~$15 billion on rebates and discounts in 2017, which reflected ~42% of total pharmaceutical sales. We’ve written the company to figure out what these numbers are for Invokana, specifically.

Global LifeScan/Animas sales of $339 million declined 15% YOY as reported (-20% operationally) and 13% sequentially, marking the lowest total revenue recorded in our model dating back to 1Q05. The challenging quarter also came on an easy comparison to 1Q17 when sales of $399 million declined 7% as reported and operationally YOY. Worldwide Diabetes Care revenue has now declined or remained flat YOY every quarter for six straight years. As expected, the slide deck cited pump discontinuation (Animas exited the market in October), BGM price declines in the US, and category and share softness in EMEA as drivers of the weak performance. 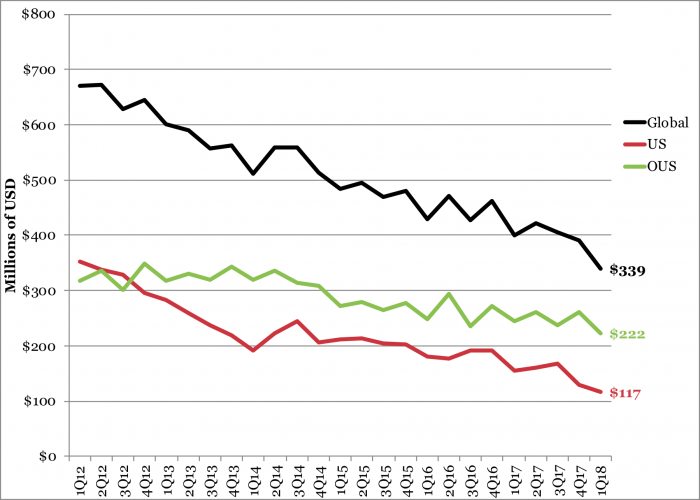 US Diabetes Care sales dropped a staggering 24% YOY to $117 million, the lowest US revenue recorded in our model, which goes back to 2005. This performance comes on an easy comparison to a 14% decline in 1Q17. US sales have now declined YOY for 12 consecutive quarters (three years). Revenue declined 10% sequentially from a low base of $130 million in 4Q17. From the chart above, it’s remarkable that the US and OUS businesses were about the same size in 2012; now, the OUS business is ~$100 million larger.

International Diabetes Care sales of $222 million declined 9% YOY as reported (-17% operationally), marking the lowest international LifeScan/Animas revenue recorded since 3Q06 ($258 million). This also came on an easy comparison to 1Q17 when sales of $245 million declined 2% as reported (-1% operationally). International revenue has now declined YOY for all but one of the past 15 quarters – the lone exception was 2Q16, when sales grew 5% on a very easy YOY comparison. 1Q18 international sales fell 15% sequentially from a base of $260 million, albeit on a tough comparison to 10% sequential growth in 4Q17.

1. Platinum Equity Transaction Highlighted in Remarks, Slides, and Press Release, But No Update

Though CFO and EVP Mr. Dominic Caruso alluded to Platinum Equity’s ~$2.1 billion offer to acquire LifeScan during his prepared remarks, no specific updates were given. The potential Platinum transaction was also referenced in the press release and slide deck (slide 13). As of the March news, if the proposed offer is accepted, it would close by the end of 2018 and create a standalone company with Current LifeScan President Valerie Asbury continuing to lead the business. The proposed ~$2.1 billion offer from Platinum represents a somewhat-low 1.4X multiple on LifeScan’s 2017 net revenue of ~$1.5 billion. That said, this is actually a premium on the 1.0X multiple that Panasonic paid for Bayer’s Diabetes Care business three years ago – that was a ~$1.2 billion acquisition on ~$1.2 billion in previous year’s sales. There was no real indication today if this is a done deal, or if J&J is still contemplating the offer or entertaining other bids. In J&J’s hands, LifeScan is truly struggling, so we are cautiously optimistic that a fresh start with solid building blocks – connected BGMs, apps (OneTouch Reveal), copious payer contracts – could lead to a greater investment in digital and outcomes, and eventually a revival of the hurting business. Read our deep dive on the offer here, including thoughts on Platinum Equity, a leading private investment firm with a portfolio of 30+ operating companies and 200+ acquisitions since 1995. The firm specializes in M&A&O – acquiring and operating companies, especially “non-core” divisions from the world’s largest corporations. Platinum seems like a very capable business operator, but less experienced in healthcare than in other industries.

There was no mention of the Calibra Medical business, whose OneTouch Via mealtime insulin delivery device remains a valuable asset and the only piece of J&J’s diabetes device portfolio to not (publicly) be placed on the trading or chopping block. As a reminder, OneTouch Via – often likened to a “wearable insulin pen” with potential to boost the easy of taking mealtime insulin– received FDA clearance back in September 2017 for an updated manufacturing process, but has yet to roll out. At this stage, it’s still not clear if J&J will sell this asset, shelve it, or actually launch it. Will we hear more on J&J’s strategy and plans for Calibra at the May 16 Medical Device and Consumer Business Review Day?

There were no updates on the OneTouch Verio Flex-WellDoc BlueStar type 2 diabetes management software integration provided on today’s call, despite assurance from both sides in January (J&J; WellDoc) of continued commitment to the project. Per the January email correspondence with J&J, more news on the ongoing collaboration is expected “later in 2018.” This project will likely transition over to Platinum, so we’d expect to hear nothing about it until that time. The technical integration consisting of Bluetooth connectivity between the WellDoc BlueStar app and J&J’s Bluetooth-enabled OneTouch Verio Flex meter officially went live mid-March in 2017 (three months post FDA clearance) but we most recently heard at ADA that it hasn’t quite rolled out to patients yet. There’s definite potential here to enhance traditional BGM and scale BlueStar’s education, feedback, bolus calculator, upcoming basal insulin titration via Voluntis, and provider relations, not to mention make a dent in type 2 diabetes healthcare expenditure – a Truven (IBM Watson) modeling analysis estimated that BlueStar could cut type 2 costs by $254-$271/user/month. WellDoc CEO Mr. Kevin McRaith was adamant that the partnership is progressing despite the likely possibility that J&J will sell the business. Meanwhile, WellDoc is moving ahead on other fronts, including launching a major consumer-facing 12-week diabetes program with Samsung Health last month.

Mr. Josh Jennings: I was hoping to just follow up with a high-level question on the medical device business. It seems as if the recent strategy has been to prune lower growth and lower margin business units with some tuck-ins. Is that how we should think about the strategy going forward? Continue with internal R&D and continued pruning?

Mr. Dominic Caruso (CFO & EVP, J&J): We do have the areas [in the medical device business] where we need to improve and we'll improve in those areas through a number of factors as we've always done at Johnson & Johnson over the years: a good mix of internal innovation and acquisitions and new technologies. I don't think that's ever been an issue for us. We've always been able to do that. And we'll talk more about it on May 16 when you'll get to hear from the leaders of the business who are responsible for their business both on what's happened in the market and with our products, and the enthusiasm they have for the launch of new products and new areas that we're getting into.

Q: Next week, I believe President Trump is going to talk more broadly about his views on pharmaceutical pricing in the US. Can you comment on that?

Mr. Joaquin Duato (EVP & Chairman, Pharmaceuticals, J&J): As you mentioned, we expect that there’s going to be an announcement on pricing by President Trump. That announcement should resemble the drug pricing policies included in the President’s budget and in the Council of Economic Advisers Report. Those policies were generally seeking to increase competition and reduce out-of-pocket costs for patients, while also recognizing the value of innovation. We understand that the announcement will include a request for information from the public on drug price issues, and we’re looking forward to participating there.