BD provided its F4Q18 (3Q18) financial update in call this morning led by CEO Mr. Vince Forlenza. See below for our top takeaways from the call, as well as relevant Q&A. Get BD’s slide deck here.

CEO Mr. Vince Forlenza announced during prepared remarks that BD has decided to discontinue the long-awaited Medtronic-partnered MiniMed Pro-set with BD FlowSmart technology “following our assessment of strategic options.” President and newly minted COO Mr. Tom Polen explained during Q&A that “the latest product redesign for FlowSmart didn’t deliver the level of differentiation that we were seeking.” BD plans to redirect its investments “into more attractive opportunities,” including the “Swatch” type 2 patch pump. While we are somewhat disappointed by the news, we are actually relieved that BD made this tough strategic decision – it was hard to imagine significant sales/profitability success competing in the tough infusion set business with an exclusive partner (Medtronic) and a problematic set design. The set has been meaningfully delayed since a limited launch in September 2016 resulted in a significant number of user complaints (especially related to kinking on insertion) and the set subsequently pulled off the market.

Adam was part of the original limited launch and you can read his test drive from October 2016 here. In addition, BD withdrew a user experience study listed on ClinicalTrials.gov over a year ago. Mr. Polen said in Q&A that part of the decision to not relaunch was partially related to the economics, which is not surprising – Medtronic is the exclusive partner, leaving BD with little leverage. Plus, BD does not have the insulin infusion set manufacturing scale of Unomedical, leaving even less room for profit margins. The set probably cannot get a premium without evidence (hard to collect), leaving profit margins even more squeezed for both Medtronic and BD. We also wonder if there was an element of reprioritization on Medtronic’s part, especially with the very strong Unomedical/Medtronic MiniMed Mio Advance set rolling out. Mio Advance is tough competition, as it offers a much better insertion user experience than Pro-set (all-in-one, fully disposable, completely hidden needle). Mio Advance launched in Europe at ATTD, and received FDA 510(k) clearance in March. No US timing has been shared, but as of ATTD, “other countries” were expected “later in 2018” – the set launched in Canada in May and was reportedly well-received. It’s possible that Mr. Polen was referencing potential competition from the Mio Advance when he noted in response to a question regarding the Pro-set discontinuation: “Certainly, the type 1 insulin pump market has continued to evolve over the last few years.”

2. “Swatch” Type 2 Patch Pump to be Submitted for Regulatory Approval in “Next Few Months” in US and EU; Initial Limited Launch Pushed to “Late Calendar 2019”

Per Mr. Forlenza’s prepared remarks, BD is “on track” to submit regulatory approvals for the Swatch type 2 patch pump in the US and the EU “in the coming months,” aligning with F3Q18 timing expecting submission “later this year.” The initial limited launch is now anticipated for “late calendar 2019” – potentially pushed back slightly from previous expectations for “late FY19” (by September 2019). The type 2 patch pump was listed on a slide (#22) of FY 2019 planned product launches, but with “CY19” noted alongside – there is a lot of juggling here on the timing. While Mr. Forlenza shared this launch timing in reference to both the US and the EU, a response from Executive Vice President Mr. Alberto Mas during Q&A indicated that this timing may only be for the US (see below for transcript; we suspect he simply omitted EU notified bodies in his off-the-cuff response). During Q&A, Mr. Mas also shared that the company is “making good progress on the [Swatch] program,” referencing clinical trials and “interactions with our customers,” though we have yet to see any data or studies listed on ClinicalTrials.gov. Last we heard on the August call, “multiple clinical trials have been completed,” including an in-human insulin infusion trial, which went “exactly to plan.” In response to a different question on Swatch and the Pro-set discontinuation, Mr. Polen remarked that “we continue to get additional patient and physician feedback all at or above our expectations.” We’re glad to see that BD is incorporating patient input throughout the design and testing process, especially since Insulet will be very tough competition here in this growing market.

There was no mention of BD’s “Diabetes Personal Assistant” app, Briight, released at ADA. As of AADE in August, Briight was close to reaching 20,000 users with a very impressive 1,000 “active users” being added each week. Currently, Briight has 21 ratings on Android with 4.5/stars (“10,000+” downloads) and 11 ratings on Apple iOS with 4.4/5 stars. BD just released updates yesterday, including the ability to log insulin and blood glucose values by voice – nice!  Additional educational content surrounding health insurance, activity, and food choices have been added to the app too. Eventually, Briight should potentially play a role in supporting people with type 2 diabetes who use Swatch. The app may be used to display insulin data, provide pump instruction, and possibly even control Swatch at some point in the future.

Global Diabetes Care revenue hit a record $285 million, up 1% YOY as reported and 2% YOY operationally on a tough comparison to 6% operational growth in F4Q17 (3Q17). This performance marks 10 consecutive quarters (~two years) of positive or flat YOY growth. CFO Mr. Christopher Reidy said Diabetes Care growth was driven by strengthened pen needle business in the US, partially offset by a tough comparison to the prior year (F4Q17 set the previous record revenue at $283 million). Sequentially, sales climbed 3% from a strong base of $276 million in F3Q18 (2Q18). BD’s pen needle business generates steady, predictable revenue, although clearly it will take something like the Swatch type 2 patch pump to accelerate growth. 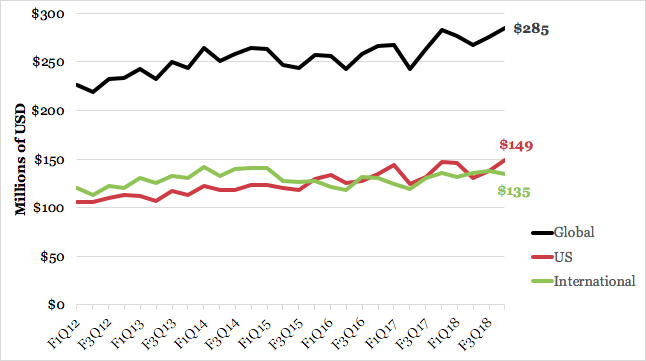 3. International Sales of $135 Million up 2% Operationally; Down 2% Sequentially

International sales of $135 million declined 1% YOY as reported (+2% operationally) on a moderate comparison to 4% operational growth in F4Q17 (3Q17). This performance breaks four consecutive quarters of positive YOY growth internationally as reported. Sales fell 2% sequentially from a very high base of $138 million in F3Q18 (2Q18) – the highest in our model since sales of $141 million in F1Q15 (4Q14).

Q: You mentioned status on the type 2 patch pump. Can you tell us a little bit more detail as to the initial strategy for rollout and the end of 2019?

Mr. Alberto Mas (Executive Vice President, BD): Yeah, on the type 2 patch pump, we continue to be very excited about the potential of the product. We are making good progress on the program. We are learning through our clinical trials and interactions with our customers. And we expect to be preparing for submission in the next few months both in the US and Europe. Our production lines are getting up to speed, and we are working our evidence generation programs as well. The program is progressing well, and we're expecting, depending on obviously the FDA approval process and timing, we expect towards the end of the calendar year to be able to launch in the US. So good news to report there.

Q: I know you discontinued the [MiniMed Pro-set with BD FlowSmart technology.] How did you frame that opportunity relative to the patch pump?

Mr. Tom Polen (President, COO, BD): To speak to FlowSmart a little bit more, certainly the type 1 insulin pump market has continued to evolve over the last few years. The latest product redesign for FlowSmart didn't deliver the level of differentiation that we were seeking. We could have continued to invest in FlowSmart. But given the economics of that as more of an OEM (original equipment manufacturer; i.e., making it for Medtronic) product and the number of more attractive investment opportunities we now have in our R&D pipeline, as part of our portfolio process we made a decision to stop that product and redirect the investments into more attractive opportunities both within Diabetes Care and outside of Diabetes Care. And certainly within Diabetes Care, the number one product there that we're investing behind and put some further funding behind is Swatch, and as you heard from Alberto, we continue to be very positive outlook on that product. It's gone through and continues to go through clinical trials. We continue to get additional patient and physician feedback on it which is all at or above our expectations. And so we're doubling down on the final stage of bringing this to market this year.