Insulet reported its 2Q18 financial update this afternoon in a call led by CEO Pat Sullivan, President Ms. Shacey Petrovic, and CFO Mr. Mike Levitz. Insulet missed guidance that had been raised in 1Q18 by $5 million (had it not raised guidance, it would’ve been about right on plan). With the exception of what Mr. Sullivan referred to as a “speed bump” (inventory) in the transition to assuming direct EU distribution from Ypsomed, the quarter had multiple bright spots with record US sales, strong operating results, strong profitability gains, Dash’s limited market release, and more. Read on for our top highlights from the call. 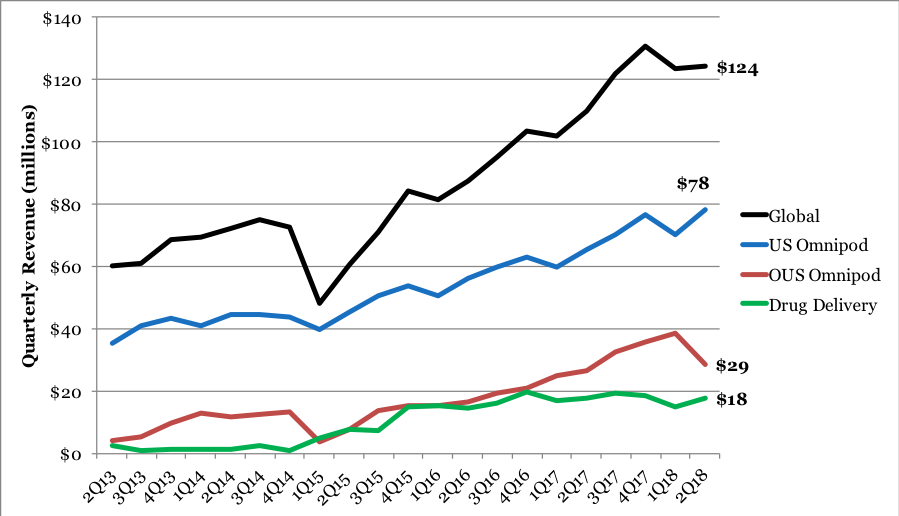 3. Positive operating profit of $4.3 million for first time in history

5. Payers responding well to pharmacy move, an advantage over other pumps

Management underscored that payers are responding well to the move to the pharmacy, which shifts some cost from the “free” PDM to the recurring Pods. Said Ms. Petrovic: “It's just a sort of further enhancing the advantage that Omnipod already has over these other systems where payers are plunking down a ton of money and then keeping their fingers crossed and hoping that people stay on the product and get the benefit. So we've just eliminated that hurdle for payers.” She added that the pharmacy channel provides a faster turnaround, reduces paperwork burden for clinics and patients, and improves patient convenience and (possibly) economics. It seems like diabetes technology has some real momentum on this front now, presumably helped by Abbott’s FreeStyle Libre, Insulet getting Medicare Part D, and now Dexcom opening up these discussions with G6 (see its 2Q18).

Following FDA clearance in June, a limited launch of the next-gen Omnipod Dash system commenced in July. As previously guided for, the release will scale over the next two quarters and move toward full market release in early 2019. Management reported that the Bluetooth-enabled pod, touchscreen PDM (locked-down Android phone), secondary display iOS apps, and paired Ascensia Contour Next One BGM was a “big hit” at ADA, and that “meaningful [payer] coverage” has already been secured. The call highlighted very positive reception at the booth, particularly from HCPs (with whom the Display and View mobile apps were a hit) and with patients (who particularly appreciated the integrated Dexcom G6 CGM-Omnipod iPhone Today Widget screen view – a brilliant way to close to CGM integration, but without any the regulatory burden). Ms. Petrovic highlighted one piece of feedback from a Dash user, who said it took her four minutes to learn the system and prime a pod – wow! Ease of use was definitely a priority for Insulet in the development of this system, and boy did it pay off…see a number of screen shots of the user experience here and here.

Insulet management continues to guide for a launch of the Horizon hybrid closed loop system in end of 2019 or early-mid 2020. Horizon is currently in the second half of the third IDE study, where Insulet is “learning a lot about the system performance in two-year to six-year olds in free-living conditions.” After the study wraps up in September, Insulet will share the data with FDA, which will dictate whether the company will proceed to a pre-pivotal or a pivotal study (termed “final IDE” today). If a pivotal study is next, Ms. Petrovic said that there is still a path for launch in “end of 2019, early 2020”; if another study is in the cards, then “it may add a few months to the timeframe” (~mid-2020). Notably, management has been meeting with FDA and Dexcom about iCGM, which “could be a tailwind” timing-wise. As a reminder, Tandem obtained FDA approval for Basal-IQ (PLGS) with iCGM compatibility (Dexcom G6) based on the PROLOG pivotal study, which actually used G5 – that Insulet hasn’t begun using G6 in studies is probably an advantage, since it can design for this from the start. As a side note, though Ms. Petrovic didn’t say anything about Insulet’s consideration of leading the charge to an integrated pump (“iPump”) designation, she did suggest that FDA is “giving pathways like the iCGM and iPump.” FDA has talked about iPump and certainly made it clear a De Novo is possible here – who will be first?

The Lilly-partnered U200 Omnipod is now expected to be on the market “toward the end of 2020 or 2021,” back from February guidance for a 2020 launch, though it is “making good progress.” There was no update on the U500 Omnipod, so we expect it is still on pace for a 2019 launch. Very positive results from the VIVID RCT, comparing U500 Omnipod vs. U500 MDI, were presented by Dr. George Grunberger at ADA: By the end of the 26 weeks, both groups had significant A1c reductions with U500 insulin, but the Omnipod group’s decrease was significant greater by 0.4%; -1.27% vs. -0.85% (p<0.001). Ms. Petrovic shared that ~13% of the US business is composed of type 2s, a segment that has kept up with the growth in the rest of the market. Of course, with the launch of U500 and U200 Omnipods, the company expects the type 2 base to grow even further in the coming years.