A recent JAMA viewpoint by Drs. Kasia Lipska, Irl Hirsch, and Matthew Riddle advocates for the use of human insulin in type 2 diabetes due to its low cost, arguing that the advantages of insulin analogs over human insulin are less clear in type 2 diabetes vs. type 1. The article rightfully identifies cost as a key consideration in diabetes care, given the vast size of this epidemic and the many patients on high-deductible health insurance plans (HDHPs) who shoulder much of the expense for every prescription. A table embedded in the paper (see below) reflects non-trivial price differences between human and more advanced insulin products, including Sanofi’s Lantus and Toujeo, Novo Nordisk’s Levemir and Tresiba, and Lilly/BI’s Basaglar on the basal side, plus Sanofi’s Apidra, Novo Nordisk’s NovoRapid, and Lilly’s Humalog on the prandial side. The article aims to provide a practical guide to human insulin therapy – while we certainly agree that it’s imperative that physicians and other healthcare providers know how to treat with insulin for patients with no other options, we hope that human insulin remains a “last resort,” rather than the return to a preferred status as treatment for type 2 diabetes.

In describing how to treat with human insulin, the article actually highlights a number of its limitations. In sharp contrast to next-generation basals (Tresiba and Toujeo), which come with a very flat PK/PD profile and long duration of action, human N insulin does not reliably cover 24 hours and necessitates a more complex dosing regimen of more than one injection per day. Human N insulin is thus a more error-prone product, and we all know insulin dosing and titration are already challenging enough. Similar pitfalls are reflected in the rapid-acting field as well. Unlike rapid-acting insulin analogs that start working within ~15 minutes, the time to onset for human R insulin is ≥30 minutes. Both basal and bolus human insulin are thus less flexible products (a mealtime dose of human insulin has to be much more thoughtfully-timed, increasing patient burden). Moreover, both confer a substantially higher hypoglycemia risk vs. insulin analogues. Hypoglycemia is an incredibly important outcome beyond A1c that contributes major costs to the healthcare system in the form of hospitalizations, emergency care, productivity loss, and more – we urge payers and providers to think about this and other long-term consequences of suboptimal diabetes care before pushing forward with human insulin as the cost-saving solution for type 2 diabetes. Hypoglycemia is thought to be less common in type 2 diabetes (due to greater residual beta cell function and increased insulin resistance). That said, multiple studies have still shown a substantial hypoglycemia benefit for Tresiba over even first-generation basal analog Lantus in patients with type 2 diabetes – while the direct comparison of Tresiba to human insulin has not been done, we can only assume that the benefit would be even more pronounced. While we acknowledge that human insulin may be the only feasible option for some in the short term, in the long term we’d prefer to see improved reimbursement prospects for superior insulin therapy and pricing transparency at all stages of the system, including PBMs. Dr. Hirsch has previously lamented that new physicians do not learn how to titrate human insulin and we’re glad that he is taking steps to address this knowledge gap at hand (this follows a brand-new talk on this topic at his annual Endo Fellows meeting). At the same time, we do not view widespread use of human insulin as the solution to the current insulin pricing controversy and we would hope that opinions like this one published in JAMA would be thoughtful in conveying this nuance. We certainly would not want payers to read viewpoints like these and force patients with type 2 diabetes to switch to human insulin en masse and we hope that such educational efforts from leading physicians can be accompanied by calls to all players in healthcare to collaborate on making insulin affordable. 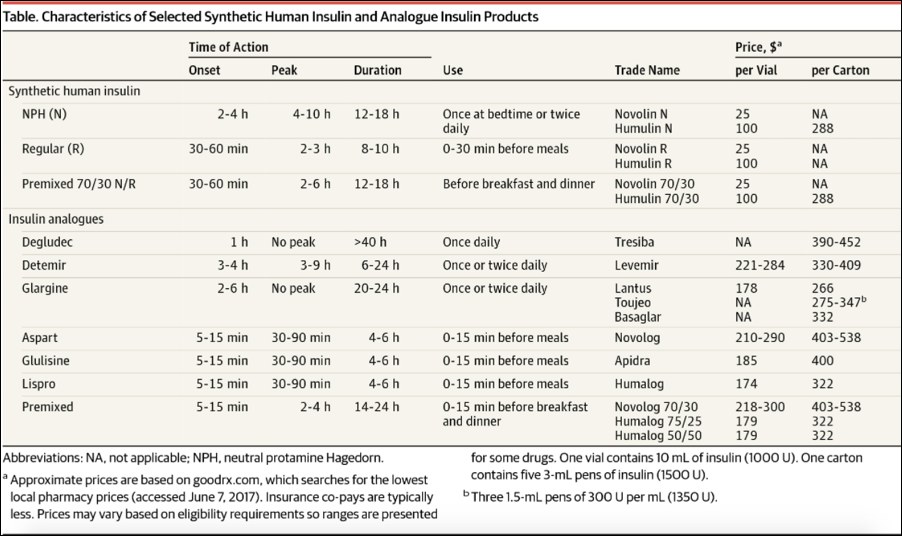