In far-earlier-than-expected news, the FDA just announced marketing authorization (clearance) for Dexcom’s factory calibrated G6 sensor! A launch of the 10-day wear, non-adjunctive, no-fingerstick, real-time, interoperable-focused CGM is expected in the US late in 2Q18 (before ADA), with an international launch planned for 2H18 following CE Mark. More will be shared on the 1Q18 call.

G6 will have a mandatory 10-day shutoff (like FreeStyle Libre), brings the long-awaited one-touch applicator and 28% lower profile transmitter to market, and includes Apple iOS and Android apps and a touchscreen receiver (must be purchased, for now). Dexcom hosted a short 28-minute conference call ~16 hours following the news, which can be listened to here.

In major, industry-changing news, FDA granted marketing authorization for the G6 sensor under a new regulation it is establishing called “integrated continuous glucose sensor,” or “iCGM” for short. Under this “unprecedented” de novo pathway, G6 and future systems like it are actually down-regulated from a high-risk Class III (PMA) to a lower-risk class II device – in other words, Dexcom CGM will now be regulated under the 510(k) process, like BGMs and pumps! Future iCGMs will be able to send 510(k)s to the FDA and claim the G6 as a predicate device.

As an iCGM, G6 is also cleared with interoperability in mind, streamlining the regulatory process for Dexcom CGM innovation, future systems that connect to G6 (e.g., pumps, wearables, apps, dosing algorithms), and minimizing FDA submissions for design changes. The FDA press release headline is very notable: “FDA authorizes first fully interoperable continuous glucose monitoring system, streamlines review pathway for similar devices.” G6 accomplished this via a new indication for use that includes the following line: “The G6 can communicate wirelessly to and from other interoperable devices.” This is the first major step in FDA’s vision for plug-and-play, component systems that minimize regulatory burden and allow users more choice. The investor call also emphasized this allows Dexcom to move faster on innovation with partners. AID systems will remain Class III devices, but G6 will be a class II component of these systems. The existing class III PMA path will remain. Overall, this will massively help Dexcom’s pump partners, who can get clearance to talk to an iCGM (e.g., G6), but won’t need a whole new PMA submission for small CGM design changes. Win!

Notably, this better-than-expected, homerun FDA news is coming three months earlier than Dexcom’s 4Q17 “goal” for mid-2018 – wow! This is easily one of the biggest regulatory wins in Dexcom’s history, and it comes ~6 months following G6’s 3Q17 submission. (It’s also 12 years to the day that Dexcom first CGM system was approved!) This is a notably fast review for any standalone CGM, given a ~one-year review for FreeStyle Libre (real-time) and a two-year review for Guardian Connect.

The down-classification to 510(k) is a major first in CGM and could blow open the doors to even faster iterative innovation for Dexcom, as well as other systems that can meet the new standards to be an iCGM (see below). Huge kudos go to the FDA for taking this enormous step forward and propelling interoperability, a need that is only growing as AID and decision support move ahead. With the factory calibration win for G6 and down classification to 510(k), Dexcom’s regulatory team has again pushed the industry envelope on CGM labeling. G6 will still require a prescription.

Along with this authorization, the FDA has established criteria (special controls) that outline requirements for iCGM devices’ accuracy/reliability and the studies/data required to demonstrate acceptable performance and be cleared under a 510(k) path. These controls are posted here as part of the FDA letter to Dexcom, and you can read our complete analysis here of the minimum performance standards; the requirement for acceptable sensor lot release practices; and an adequate way of controlling for secure and reliable data transmission to the other device(s). The bar has been set very high on accuracy standards and we don’t believe all other companies’ CGM systems (as approved now) will automatically meet them. For now, this is definitely a competitive advantage for Dexcom, particularly because FDA’s Dr. Courtney Lias told us that FreeStyle Libre (as it stands) will not meet the controls – continuous communication is part of them, given the interoperability focus. Notes Dexcom’s press release: “The FDA’s special controls set a rigorous, new standard in our industry and clearly define the process by which other CGM systems may be approved.” This was very smart of Dexcom to get a lower-risk category (so it can innovate faster) that also creates a competitive moat for others – if you don’t meet the rigorous standards, you can't get the 510(k) path. We’ll have more on this soon.

For the first time in Dexcom’s history, G6 does have a mandatory shutoff at 10 days, a move we expected given the labeling and factory calibration. In line with Dexcom’s ATTD 2018 symposium last month, G6 users will have the ability to enter an optional fingerstick calibration, if a user desires to enter one – e.g., if errant sensor values are observed. On the investor call, management emphasized this could be valuable for AID partners. However, in downloading the just-released G6 simulator app, it’s very clear from the menu structure just how much calibration are de-emphasized – a user must go into “settings” and find “calibrate” near the bottom of the menu (under “Apple Health”). This is very smart of Dexcom. The G6 simulator app also showed us that each sensor come preloaded into an applicator, and a calibration code is required for each sensor and captured via photo. We’ll be interested to better understand the startup hassle here, which does seem slightly higher than with FreeStyle Libre’s factory calibration (no codes).

Competitively speaking, however, this puts Dexcom’s G6 on top of Abbott’s FreeStyle Libre on many product features, especially the new 510(k) clearance as an “iCGM” with interoperability in mind. We include a feature-by-feature comparison below – of course, there is tremendous runway for all CGMs to massively expand the underpenetrated CGM market in the US and globally.

Dexcom already has a webpage up at www.dexcom.com/g6-cgm-system and the aforementioned G6 simulator app on iOS and Android (worth watching the videos in the app). G6 seems like it could launch on the earlier side in Q2, as many pieces already seem to be in place and Dexcom historically launches quite fast. That said, G6 changes every piece of Dexcom’s product, so a controlled rollout would be prudent.

Overall, this is a tremendous, better-than-expected regulatory victory for people with diabetes in the US. Now, patients will have another factory calibrated CGM to choose from – three years ago, we would not have guessed TWO such systems would be out, both with insulin-dosing claims! And moving forward, today’s news is potentially game-changing for the field, opening up a streamlined regulatory process for other iCGMs and systems/software that connect to iCGMs.

Below, we include pictures of G6 from the media kit, a feature comparison with FreeStyle Libre and Guardian Connect, and our questions. 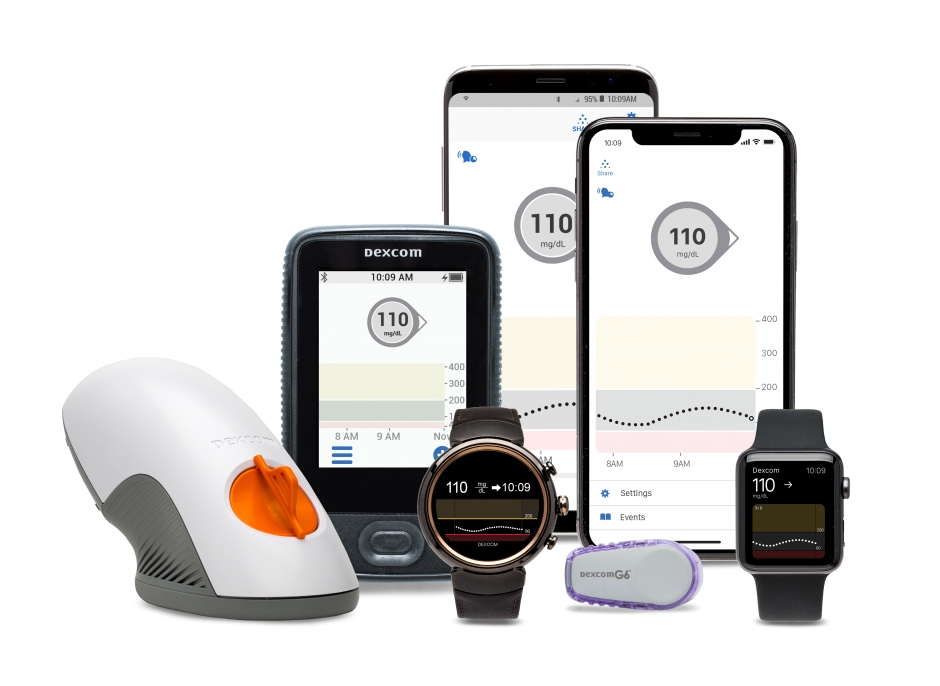 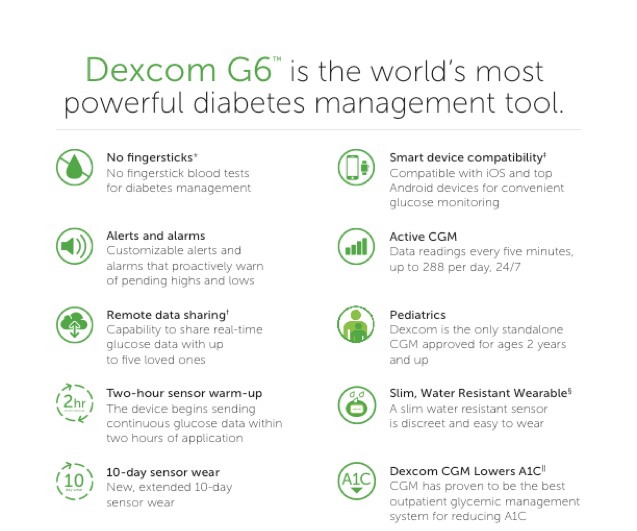 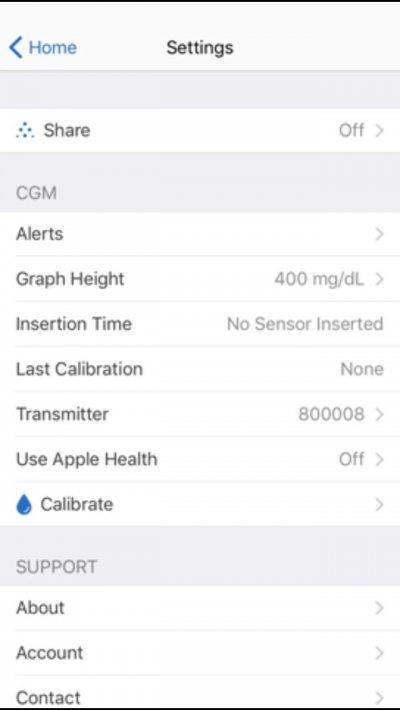 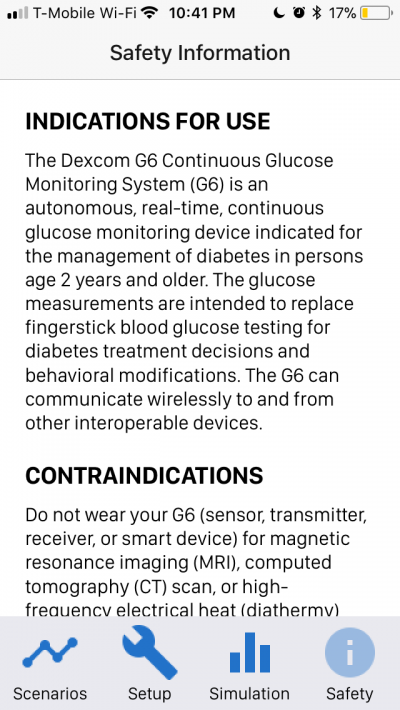 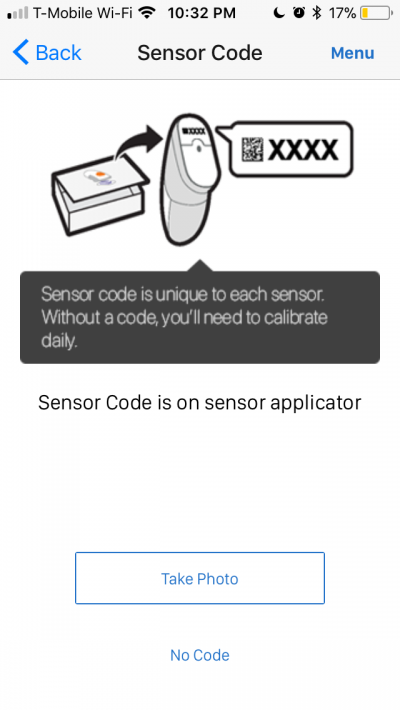 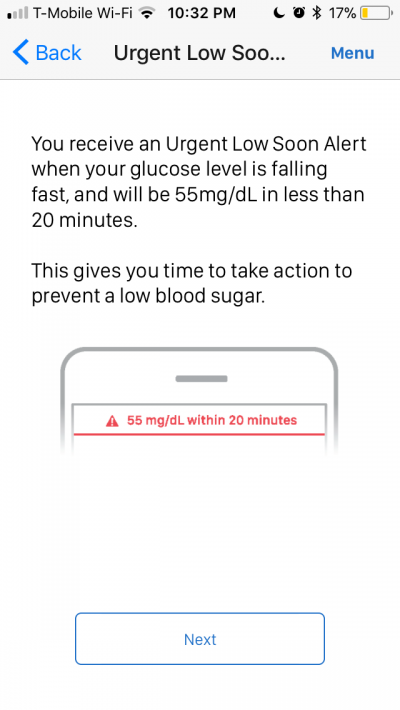 In the table below, we’ve summarized the key features of all three approved standalone CGMs in the US. The yellow highlight denotes which system(s) has the advantage on a particular feature, if such an advantage is clear; of course, this is our opinion and some is subjective!

Q: How quickly will Dexcom follow with a 14-day wear indication for G6? How quickly will Verily gen one follow (per JPM in January, gen one was expected in late 2018/early 2019)? Today, it seemed that both will be 2019 launches a the soonest, given everything happening with G6. It remains unclear if all G6 users will move over to the Verily product; we’d hope so, but this remains vague.

Q: How long until G6 can launch in the Medicare channel? Management said it has to work with Medicare on this piece (ugh), so G5 bundles will continue shipping for the time being.

Q: Where will Dexcom set G6 pricing? Can it push into the pharmacy with G6, drafting on what Abbott has done with FreeStyle Libre?

Q: How much of a competitive advantage is this new iCGM pathway? How significantly could this speed CGM and related software, wearables, sensor-augmented pump, and AID innovation? How much does this reduce Dexcom’s workload?

Q: Will other approved CGM systems easily meet the special controls for iCGM going forward – e.g., could Abbott’s FreeStyle Libre and Medtronic’s Guardian Connect meet them currently or in subsequent generations? To what extent will these controls prevent a flood of wellness CGMs (we think they will, at least from going the 510K route)?

Q: How seamlessly will other products communicate with G6?  How streamlined will the FDA pathway be for systems that talk to G6 and other iCGMs?