We were elated to see the December issue of Diabetes Care jam-packed with CGM news – a whopping eight out of 27 articles fell under “Continuous Glucose Monitoring and Risk of Hypoglycemia,” the very first category listed in the table of contents. Several items in the journal dealt with establishing clinically meaningful outcomes beyond A1c, aligning perfectly with the goals laid out at ADA 2017 last June and the Outcomes Beyond A1c workshop in July. This report focuses on two papers in particular – CGM consensus statements from JDRF’s T1D Outcomes Program and ATTD.

Included in this issue was an enthusiastic editorial on the Maturation of CGM and Glycemic Measurements Beyond HbA1c written by luminaries Drs. Matthew Riddle, Hertzel Gerstein, and William Cefalu. As quoted in the editorial: “Periodically, a new idea, method, or tool leads to a turning point in the management of diabetes. We believe such a moment is now upon us, brought by development of reliable devices for continuous glucose monitoring (CGM).” This is the strongest CGM endorsement yet from ADA/Diabetes Care and should bode very well for prescribing and reimbursement. The editorial highlights how CGM can help solve previously unanswered questions, including the link between complications vs. time-in-range, hypoglycemia, and glycemic variability. The authors expressed particular excitement about using CGM data as an outcome in clinical trials – we hope to see this become standard in the next few years! Above all, the patient experience with CGM must remain the focus, and the authors note that optimal CGM use (for now) may require more rather than less HCP support. Next steps include benchmarking outcomes beyond A1c (What should time-in-range goals be?), stronger research on who should use CGM, and how best to provide individualized advice.

The long-awaited JDRF T1D Outcomes program publication is also out – sharing consensus on outcomes beyond A1c from AACE, AADE, ADA, the Endocrine Society, JDRF, the Helmsley Charitable Trust, the Pediatric Endocrine Society, and the T1D Exchange. Likewise, ATTD has its own consensus statement in this issue following the February 2017 meeting. The papers reinforce each other brilliantly (see tables below), with clear alignment on CGM thresholds for reporting hypoglycemia (<70, <54 mg/dl), time in range (70-180 mg/dl), and hyperglycemia (>180, >250 mg/dl). The ATTD paper also makes recommendations on variability (CV <36%), recommended CGM data sufficiency (two weeks) and time blocks, how to define episodes, and more.

An important distinction is JDRF’s focus on type 1, whereas ATTD provides guidance for type 1 and type 2. The ATTD paper is also a bit more comprehensive, focusing more broadly with sections on limitations of A1c, use of CGM and SMBG, minimum performance requirements for CGM, glycemic variability, and data reporting. Both papers are very well cited and have an incredible author lineup. Read on to learn more , or read each in full here (JDRF et al.) and here (ATTD).

* Severe hypoglycemia (level 3) and diabetic ketoacidosis (level 3) are not key CGM metrics per se. However, these conditions are included in the table because they are important clinical categories that must be assessed and documented. 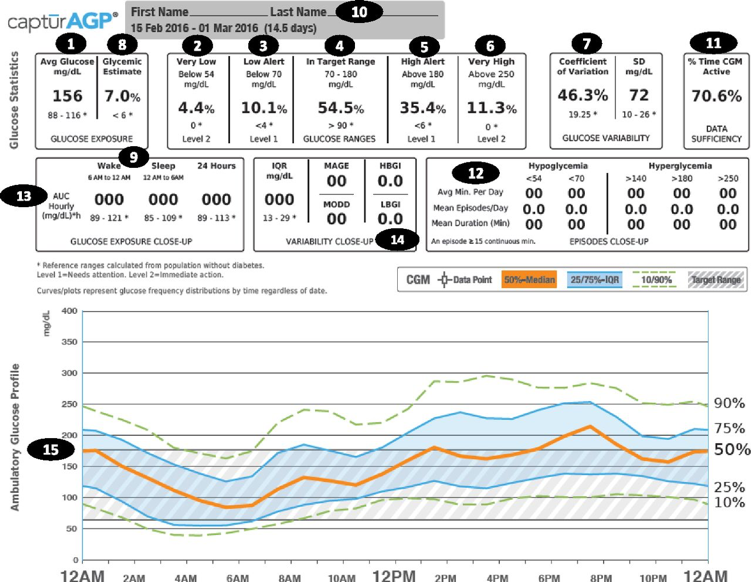 Notable Quotes and Other Takeaways from Both Consensus Papers