Medtronic reported its 1Q20 (F4Q20) financial results this morning on a call led by CEO Geoff Martha, CFO Karen Parkhill, and Executive Chairman and outgoing CEO Omar Ishrak. It was Mr. Ishrak’s 36th, and final, appearance on Medtronic’s earnings calls and several analysts offered their congratulations to Mr. Ishrak during Q&A. Mr. Ishrak took over as Medtronic’s CEO in 2011, doubling the company’s annual revenue overall and guiding the company through the largest ever medical technology acquisition ($43 billion acquisition of Covidien in 2014). More pertinent for diabetes, Medtronic Diabetes revenue was $1.5 billion exiting 2011, and it’s up 60% over that period, having reached $2.5 billion in the latest year (lower than the $3.0 billion that would have been the “double” similar to what some of the rest of the company saw). New CEO Geoff Martha was poised in his first earnings call as CEO, especially given the challenging circumstances around the pandemic. New Medtronic Diabetes head Sean Salmon was also on the call though only one question was directed toward diabetes.

Diabetes is on slide #10 here and read on below! 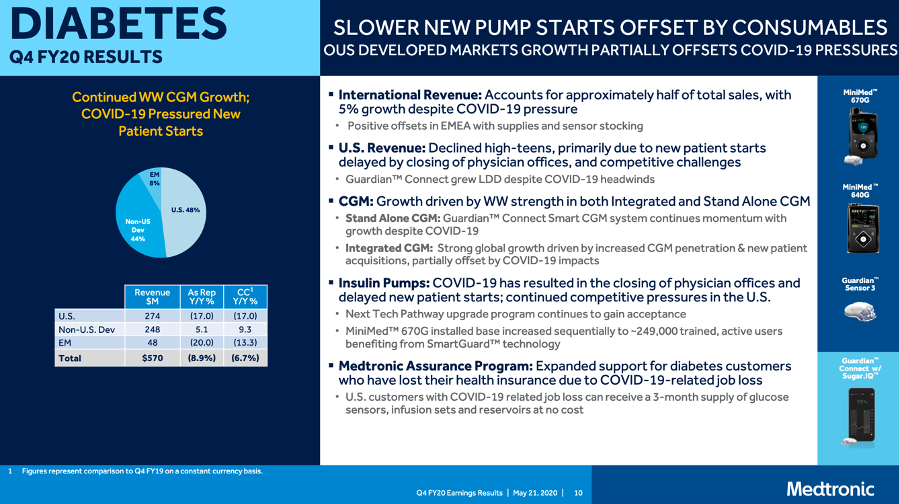 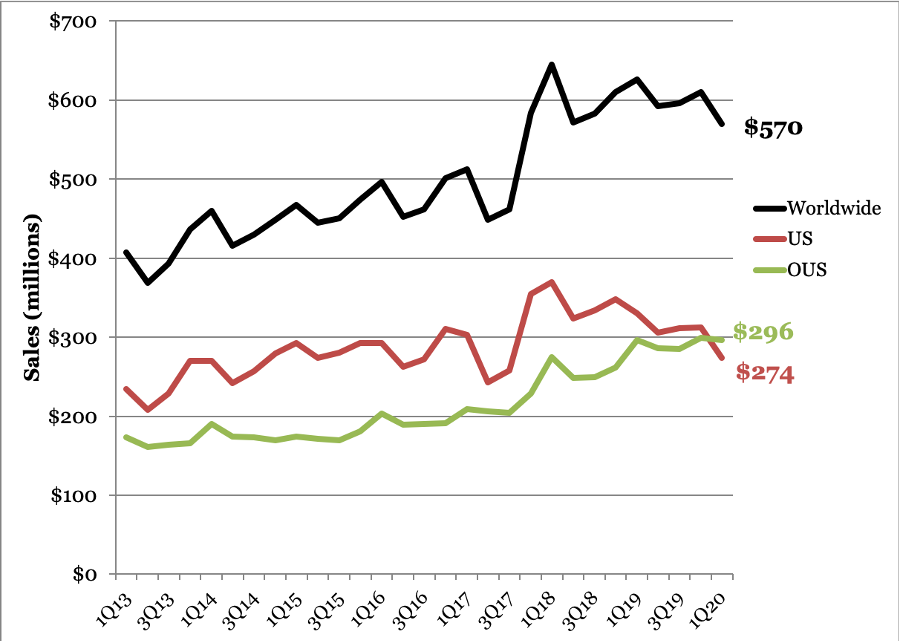 For 1Q20 (F4Q20), Medtronic reported worldwide Diabetes revenue of $570 million, declining 9% YOY as reported (-7% operationally, -7% sequentially). Pre-COVID-19 guidance for Diabetes expected revenue to stay “flat” or “down [by] low single-digits” and we would look for further, worse-than-expected declines. The 9% revenue decline is the largest YOY decline since at least 2004; while compared to the 25% YOY decline in Medtronic’s overall revenue, Diabetes fared relatively well, we look for further competitive declines that are worse than forecast. Medtronic’s Cardiovascular, Minimally Invasive Therapies, and Restorative Therapies groups saw YOY revenue declines of 34%, 14%, and 33% as reported, due to impacts from COVID-19 and the hospital-intensive nature of these businesses. As the company shared a few weeks ago, the biggest impact from the pandemic on Medtronic Diabetes would be on reductions in new insulin pump starts, which is a big deal, while sales of supplies (i.e., CGMs, infusion sets) would be less affected – that said, given the new news of the later-than-expected US appearance of the 780G, we would expect more of those waiting for the 780G may migrate to Tandem or Insulet (once the new Insulet AID emerges) or more may move to the Loop option using Insulet. Indeed, Medtronic’s 1Q20 materials note increases in sales of supplies due to users stocking up, particularly in international markets; this increase was not quantified but we don’t see it as sustainable and may well result in weaker consumables as early as the next reported quarter. Sequentially, sales fell 7% from 4Q19 – this followed a slightly challenging comparison as there had been a sequential increase of 2% a quarter earlier. 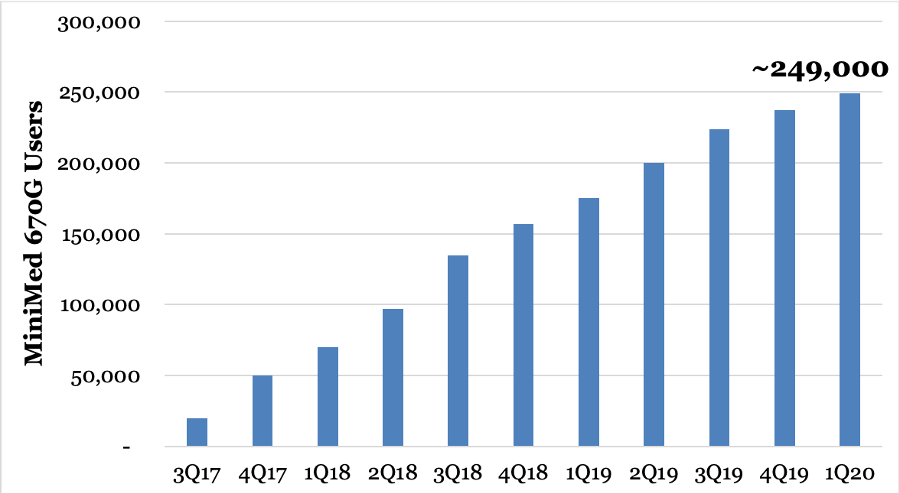 Medtronic added ~12,000 more “trained, active users” in 1Q20, bringing the total to ~249,000. Most of these additions likely came from outside the US, given the differences in sales trajectories. MiniMed 670G also faces less competition in international markets, though Tandem and Insulet continue to expand into new geographies. The ~12,000 sequential adds comes in slightly under ~13,000 sequential adds in 4Q19; this is not a surprise, as anticipation for MiniMed 780G continues to build (and no way to upgrade 670G pumps to the 780G algorithm). Still, a quarter of a million users is an impressive number for the first-to-market hybrid closed loop system.

As many other companies have done, Medtronic suspended its guidance for both the second quarter and full year due to COVID-19. The company also announced that its Institutional Investor and Analyst Day, originally scheduled for June 2, will be postponed. This s always a highlight from our view and a great source of information – we were very sorry to hear this. Instead, during prepared remarks, CFO Karen Parkhill gave some commentary around dynamics Medtronic is seeing around COVID-19. Ms. Parkhill said the company was already seeing slower declines in weekly revenue “over the first few weeks of May” with “encouraging signs of earlier-than-anticipated recovery in several places around the world.” In late March, Medtronic saw “approximately 60%” YOY declines in US weekly revenue; today, Ms. Parkhill shared that those declines were “around 30%” in May. This was not that relevant to diabetes in our view as it’s difficult to parse out the impact on Medtronic’s only consumer business from that broad aggregate data – though we know the hospital business is improving. As we saw in in 1Q20, Diabetes is expected to see a decline in 2Q20 (F1Q21), and while it will be a smaller decline compared to the overall company, that is not illuminating too much.

During prepared remarks, Mr. Martha gave several updates around MiniMed 780G, starting with expected approval for MiniMed 780G in Europe “this quarter.” We first learned that 780G had been filed for CE-Marking in February during the company’s 4Q19 update. It was not officially mentioned, but presumably European launch of 780G would come soon after approval. Getting MiniMed 780G in Europe and other CE markets before Tandem’s Control-IQ and Insulet’s Omnipod Horizon would certainly help maintain Medtronic’s strong market position outside the US. Tandem expected to roll-out Control-IQ in Europe in the second half of 2020, but we believe this has been pushed back to due COVID-19. Insulet’s Omnipod Horizon won’t be on the US market until 2021 and broader European rollout for Omnipod Dash has also been pushed back to 2021. 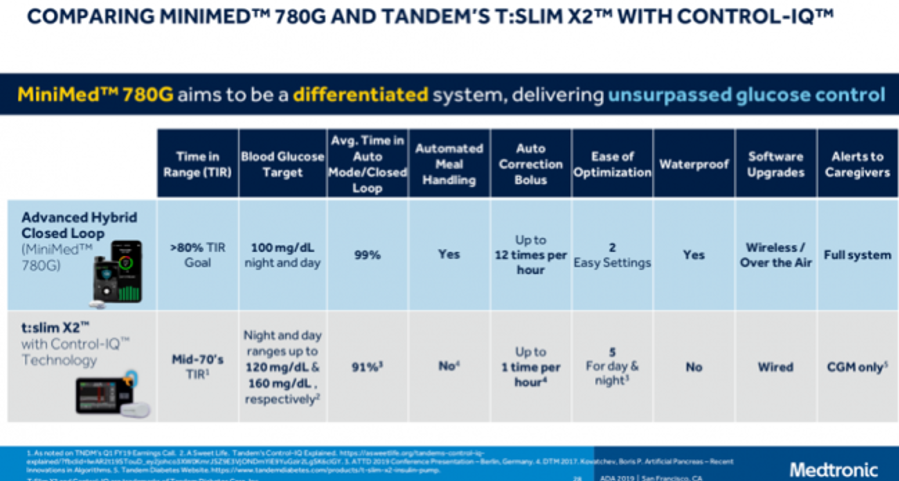 2. CGM updates: Zeus iCGM FDA and CE submissions by “end of summer”; Synergy IDE submission “within the next few weeks”; no updates on non-adjunctive Guardian Sensor 3

An update on Medtronic’s CGM pipeline was briefly given by Mr. Martha during prepared remarks. He did note that clinical trial enrollments and start-ups have been delayed due to COVID-19; in terms of CGM, we believe this only applies to the “Synergy” CGM, as the “Zeus” CGM pivotal trial was well underway before COVID-19 and has either finished or will have finished by the end of the month. 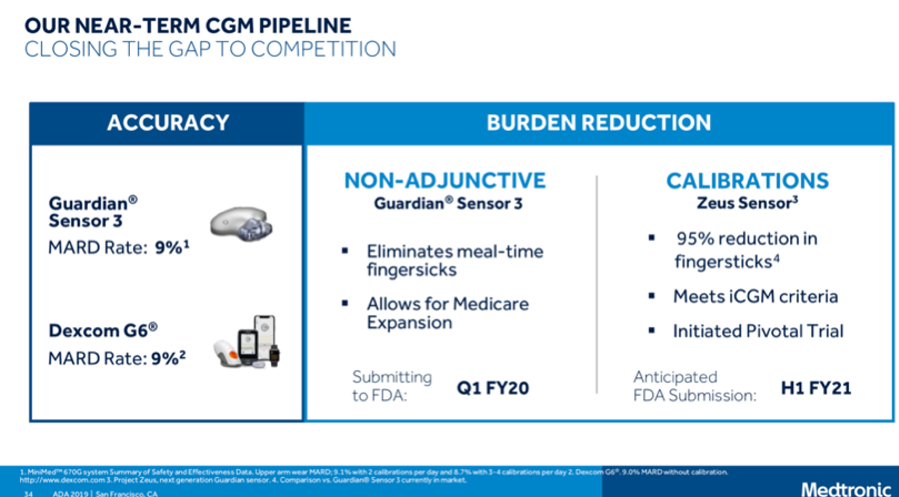 Outside of CGMs and MiniMed 780G, there were no updates on the rest of Medtronic’s Diabetes pipeline.

It has been a busy time for Medtronic, as the company responds to COVID-19. Here are a few highlights of the company’s efforts, inside and outside of Diabetes. See this page for a full list.

Q (Bob Hopkins, Bank of America): I was wondering if you could just offer up a quick comment on the upcoming Diabetes data that we're going to see at ADA, because I know in the past, you have commented that you do expect a Time in Range of around 80% and I'm just wondering if that is still the case.

A (Sean Salmon, Diabetes Group President): Yeah, thanks for the question, Bob. So, we'll have two datasets coming up at the virtual ADA, the first of which is going to be a randomized study out of New Zealand which serves as the CE Mark data, and the second one is the adult portion of the advanced hybrid closed-loop data which will be featured there. And, to your expectations for that, we really evaluated a number of different things in that study. Most importantly, we looked at targeting the glucose settings with patients with two different levels. One is the usual level that we have of 670G today, and the other one is a more aggressive, lower target, and we're evaluating the safety of that. So, as you look at those results, you'll see that there's really a lot to unpack there. But, we're very confident in the product and look forward to sharing the results next month.