Roche Webinar: Accu-Chek Guide available in US with cash pricing of ~$0.50 per strip, or less with favorable SimplePay savings card; connected integration with Medtronic possibly in mid-2018; test drive – May 17, 2017

Last week, Roche Diabetes Care hosted a webinar to discuss the US launch of its new Accu-Chek Guide BGM system, sharing details on pricing/copays and highlighting Medtronic, Glooko, and mySugr integrations. The Bluetooth-enabled meter is nearly identical to the Accu-Chek Connect, with the major changes in strip design, pricing, and vial packaging. See highlights below!

1. Affordability and accessibility were positioned as major priorities on the call – accordingly, Roche has lowered the shelf price of Guide strips to ~$0.50/strip in the US. While Roche doesn’t control what the retail pharmacies charge, they estimate that the shelf price of a vial of 50 strips will be from $25-$30 – this is indeed true, at least on Accu-Chek Guide’s CVS.com listing ($26.99 for 50 strips). At ~$0.54 per strip, that is a pretty significant discount to current Roche strips that generally retail at over $1 per strip in the US.

2. The webinar also introduced the Accu-Chek Guide SimplePay Program for those with commercial insurance or paying cash. By presenting this card and a prescription, patients will get a vial of 50 strips for $19.99, and each incremental 50 strips thereafter will add just $10. This means 100 strips for $29.99, 150 strips for $39.99, etc. At the high end of 600 strips for $129.99, that’s only $0.22 per strip without insurance – nice! The program also includes an offer for a free meter, but is not applicable to beneficiaries of public insurance. Still, Roche’s ads note that Guide strips are covered at the lowest tier on Medicare Part B and are preferred on UHC Medicare Advantage and Humana Medicare Advantage plans. The Simple Pay program card is currently offered through physician offices, but soon through Roche’s website and attached to boxes this summer. We’re very glad to see the focus on affordability while maintaining strong accuracy and integrating into the connected ecosystem. 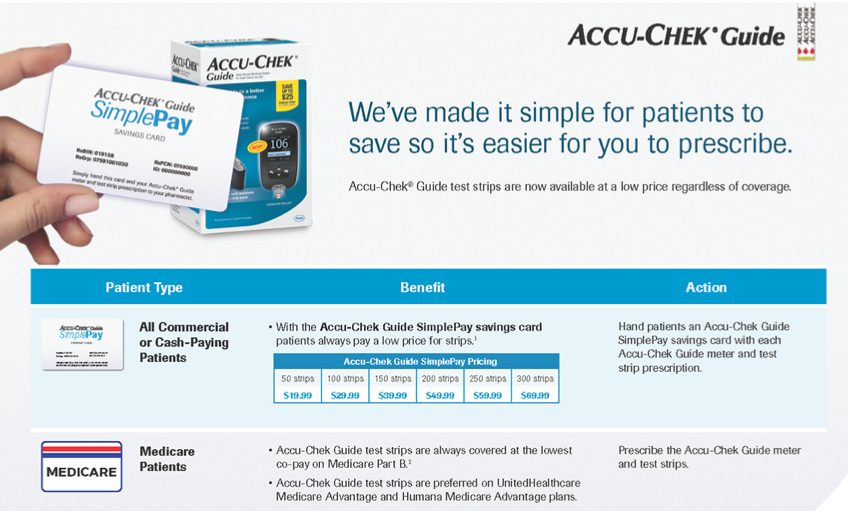 3. We’ve been testing out the Guide BGM and strips here at 804 Haight, and have been most impressed by the strips’ very wide blood application area – it is the widest we’ve ever used, making it easy to apply blood anywhere on the end of the strip. (In contrast to narrow fill windows on most other strips.) The spill resistant strip vial, which places strips vertically, is a big focus of the marketing, though not a gamechanger in our view. It’s nice that the strips don’t fall out of the vial, but it’s still not that easy to pull out strips in our view (they are quite thin and require some dexterity). Otherwise, the meter is very similar to Accu-Chek Connect. We like that the port light comes on automatically, which makes testing at night very easy. The reported accuracy is also very strong, with 95% of values within ±10 mg/dl (<100 mg/dl) or within ±10% (≥100 mg/dl).

4. The exclusive Medtronic deal, announced in February, will link Guide (or a similar system) with Medtronic’s future Bluetooth-enabled insulin pumps. According to the webinar remarks, this could occur as soon as the middle of 2018 with a Medtronic pump – that would imply that a next-gen MiniMed pump will add Bluetooth by some time next year, a pretty major update if true. Medtronic has never shared specific timing on its plans for a Bluetooth-enabled pump immediately after the MiniMed 670G, other than an 2016 Analyst Day Update that pegged commercialization of a next-gen closed loop after May 2020 (touchscreen, smartphone control, multi-parameter sensing). Perhaps this immediate next version is something very similar to the 670G, but in a slightly altered form factor to add Bluetooth (and perhaps automated correction boluses via DreaMed’s algorithm?).

5. The presenters also shared that Glooko is in the process of integrating with the Accu-Chek Guide, and reminded listeners that the very good mySugr integration has launched in the US. The latter gives users a free Accu-Chek Guide BGM voucher and a free upgrade to mySugr Pro. We’re glad to see Roche connecting its meter widely within the diabetes software ecosystem. Can these partnerships help drive US growth and give Roche a competitive advantage over other BGMs?