Senseonics reported 1Q19 financial results in a call this afternoon led by CEO Dr. Tim Goodnow. See below for top financial and pipeline highlights from the call.

Senseonics reported worldwide 1Q19 revenue of $3.4 million, down 52% sequentially from a record $7.2 million in 4Q18. Q4-to-Q1 sequential declines are typical for most CGM and pump players, and this only reflects $3.8 million less in absolute sales. Still, it does mark the first sequential decline recorded in our model. Sales increased a promising 16% YOY from $2.9 million in 1Q18. CEO Dr. Tim Goodnow maintained that sales were “in line with expectations” based on Senseonics’ contracted timing obligations with Roche in the EU as well its Patient Bridge Access Program in the US. Management remains confident that 2H19 will see stronger sales, with 70% of international revenue expected in the back half of the year. Still, the sharp drop in the graph below does look severe, given the early status of commercialization. 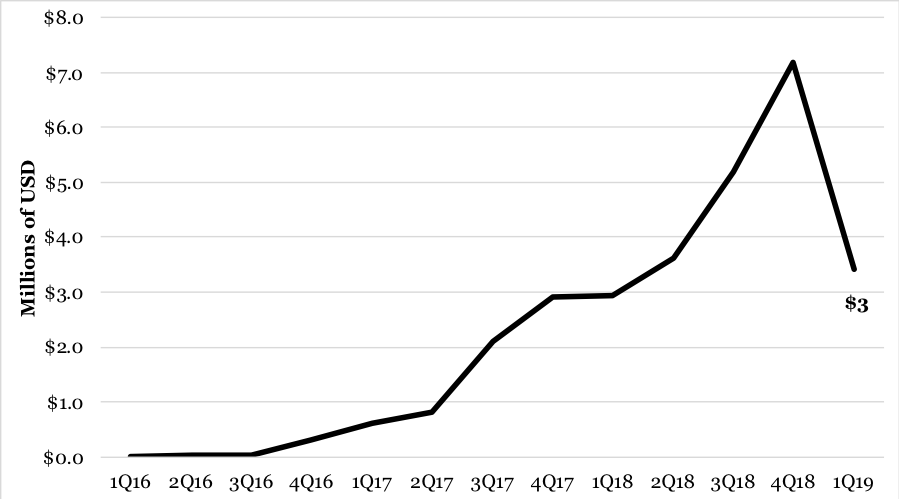 2. Over 2,000 Prescriptions Received from Eversense Patient Access Bridge Program; ~25% of US Eversense Users Are New to CGM

Dr. Tim Goodnow highlighted the newly launched Eversense Patient Access Bridge Program, underscoring that despite being available for only 10 days in 1Q19 (late March), there has been “a meaningful immediate impact.” To this end, Senseonics has already received over 2,000 prescriptions for Eversense from the program and Eversense shipments per week have nearly tripled. Importantly, there has been a five-fold increase in the number of Eversense patients covered by the four largest payers currently holding experimental and investigational (E&I) designations with Eversense – this is particularly positive given that patient demand can be instrumental in overturning E&I designations. Dr. Goodnow also noted a doubling in the number of prescriptions each week and a corresponding 66% increase in the number of healthcare professionals prescribing patients each week. Management was “encouraged” by the growing user base and expects it “to trend positively as awareness grows.”

Eversense received reimbursement from Blue Cross Blue Shield’s federal employee plan, adding an additional six million covered lives and bringing the total to “over 66 million covered lives” in the US. Dr. Goodnow emphasized that Senseonics is “well on the way” to reaching 100 million covered lives in 2019 (i.e., ~one-third of the US) and continues to plan for an additional 150 million covered lives in 2020. We were excited to hear that Senseonics is engaged with “multiple payers” regarding value-based coverage programs. During Q&A, US VP Mr. Mike Gill noted that outcomes could include sensor utilization and glycemic metrics such as A1c and time-in-range. In short, Mr. Gill claimed: “we feel pretty good and positive that if we’re in a value-based program with any payer, they would not only be pleased with the clinical outcome, but certainly the economic value that we’re providing.” We think Senseonics is uniquely situated to offer value-based contracts, given the ability to spread pricing over many more days of wear (90-180 days). Eversense may also have adherence advantages, simply from a supply acquisition standpoint and reducing sensor insertions to 2-4 times per year. It would be interesting to see comparative statistics on adherence between different CGMs – does Eversense guarantee more use simply because it is implanted? Of course, Eversense does require recharging the transmitter battery and looking at the data, so the simple fact that it is implantable does not mean it is a higher-adherence product.

International Eversense users increased a robust 62% YOY, implying there are now roughly ~3,200-4,500 Eversense users internationally. (This is an assumption on our part: as of 1Q18, there were roughly 2,000-2,800 Eversense users worldwide.) Sensor placements rose even faster at 85%, suggesting many users getting reinsertions. In February, Senseonics marked its 10,000th sensor insertion. Eversense is now in over 700 European clinics with nearly 1,000 physicians authorized to perform Eversense placements.

Senseonics’ PMA supplement to expand the 90-day Eversense indication with a non-adjunctive dosing claim is in the “advanced stage” of FDA review, with approval expected this summer. A launch will come “quickly thereafter.” Once the non-adjunctive dosing claim is secured, Senseonics plans to meet with Medicare to discuss reimbursement, as the indication would categorize Eversense as a therapeutic CGM. (Reminder: it still needs two fingerstick calibrations a day, so presumably Senseonics would need a BGM partner like Ascensia for Dexcom’s G5.) In Q&A, Dr. Goodnow clarified that Medicare reimbursement is expected in “the 2020 time period.” We’re not sure if the Medicare population is included in Senseonics’ goal to secure an additional 150 million covered lives in 2020. Dr. Goodnow anticipates doing “everything we can to move [Medicare reimbursement] to earlier in 2020,” but acknowledged that conversations cannot begin until the dosing claim is achieved. Dexcom’s G6 has still not launched into Medicare, meaning the current offerings are G5 and Abbott’s FreeStyle Libre.

Senseonics’ 180-day US clinical trial for Eversense XL is “on track” to complete enrollment in 3Q19. While we had learned on the 4Q18 call that the trial would support an iCGM classification for Eversense XL, Dr. Goodnow today explained that the first 90 days of the trial will actually go towards supporting an iCGM claim for the 90-day Eversense. Senseonics then plans to submit separately to FDA for Eversense XL with 180-day wear-time and reduced calibration; Dr Goodnow anticipates a launch in 2020. If the 90-day Eversense does secure iCGM classification, we would assume that Senseonics will be able to submit the 180-day Eversense under the 510(k) pathway, demonstrating the pipeline acceleration and business advantage that iCGM affords.

Senseonics has completed the mandated long-term post-market safety registry study of Eversense in Europe, collecting data from “over 3,000” real-world users. The results correspond with pivotal clinical trial findings and demonstrate “the safety of the long-term use over multiple sensor insertions. There was no recorded product- or procedure-related significant adverse events, and <4% of participants experienced a device- or procedure-related adverse event of any kind. The data will be shared at ADA and full results published in “the next three to six months.”  Senseonics also expects to present early US patient data at ADA.

Beta Bionics will present “early results” at ADA from its feasibility study investigating the insulin-only iLet with the 90-day Eversense CGM. 18 participants were monitored in three separate seven-day algorithm control sessions. Last we heard, the iLet insulin-only pivotal trial was slated to begin in 2H19. We hope this starts as soon as is possible as having a closed-loop option will be extremely important for Eversense, particularly as visibility increases.

Q: Tim, it's been a year since the FDA approval. I'd just be curious to hear your overall thoughts on how you felt the launch went in year one. What worked out for the team, what would you like to improve on for year two?

Dr. Tim Goodnow (CEO, Senseonics): We've been very excited. The company obviously has grown a lot in that time period. We continue to put a lot of the infrastructure in place to support the commercial organization. Approval came just about a year ago – actually in the second-half of June – and I feel really good about the way that we actually got Eversense into patients by the end of July.

Obviously, the Aetna win very early on was a great win for us and that was done because of a lot of hard work that had been done ahead of time by the commercial team to get them on-board and get them excited about being one of the early first movers. I've been really happy and excited with the continued innovation. We are seeing significant dividends come from the flexibility now to have nurse practitioners and physician assistants do the insertion. It's a group that very much loves to do a procedure like this and has been very, very accepting of it. Obviously, now being the only CGM that's MRI compatible has helped a lot. So great, great work by our engineering teams to get that included in and out.

The Bridge program has been important to create that access. If you're looking at some of the blogs, which are pretty active in diabetes, you're starting to see more and more and more prevalence of Eversense being out there. But we still have the biggest part in front of us which is the continued growth and expansion of the payers that, as Mike said, is what is absolutely gating the business and we need to get that knocked down. I'm very confident that we'll get there. And anything that we can do there quicker is to our best advantage.

Q: Tim, I just wanted to follow-up on the potential for an iCGM status here within 90 days. Your device is the only implantable CGM. So, I would be somewhat surprised if FDA would declassify an implantable device to a class 2 medical device. What are your thoughts on how you actually can obtain the iCGM status?

Mr. Mukul Jain (COO, Senseonics): You're right about the complexity of Eversense being an implantable and then downgrading it to a 510(k) but we have had that discussion with the Agency. And they have looked at iCGM from the perspective of being a device that can be interchanged with the pump. And they are looking at just the meeting of their special controls as the criteria that they look for iCGM. So, from that perspective, they're very comfortable looking at the implantable and giving it an iCGM as soon as we give them the data that meets their special controls.

Mr. Mike Gill (US VP, Senseonics): I won't comment on the last question in terms of negotiations that are active. I could tell you that in many ways value-based programs are becoming a standard discussion. We feel like we have a pretty strong position statement there where if the sensor utilization is not as expected we will work with that plan in order to figure out what is the right payment terms. Metrics around patient outcomes also would be negotiated through that and we feel very confident because of what we've seen in Europe in terms of A1c, time and range, and wear time of the sensor. We feel pretty good and positive that if we're going in a value-based program with any payer they would not only be pleased with the outcome the clinical outcome but certainly the economic value that we're providing.

Q: Can you talk about the pricing and reimbursement dynamics you've seen from a market standpoint? There's a lot of commentary about some increasing competition coming from Abbott with Libre 2.0 potentially getting iCGM and driving some more price competition. What are you seeing in your conversation with payers? Does that change your outlook at all?

Dr. Goodnow: We do recognize that healthcare pricing does ultimately only go in one direction and we fully expect that that would be the case in CGM as well as you get greater and greater penetration. In fact, a patient with type 2 diabetes on insulin is a candidate and should be on a continuous glucose monitoring system. And that does need to be done at the best economics that we can afford as a society. So, we have absolutely been focused although we are early in our tenure. The entire reason that we are focused on taking a 90-day product to 180-days and then 180-days to 365 is because we do recognize that we have a very unique cost position so that we can support the dynamics and potentially lead the dynamics and cost reductions in the future as we go into that much broader population.