Medtronic reported 2Q19 (F1Q20) financial results this morning in a call led by CEO Omar Ishrak. Diabetes is on slide #10, and below you’ll find highlights and diabetes-related Q&A. 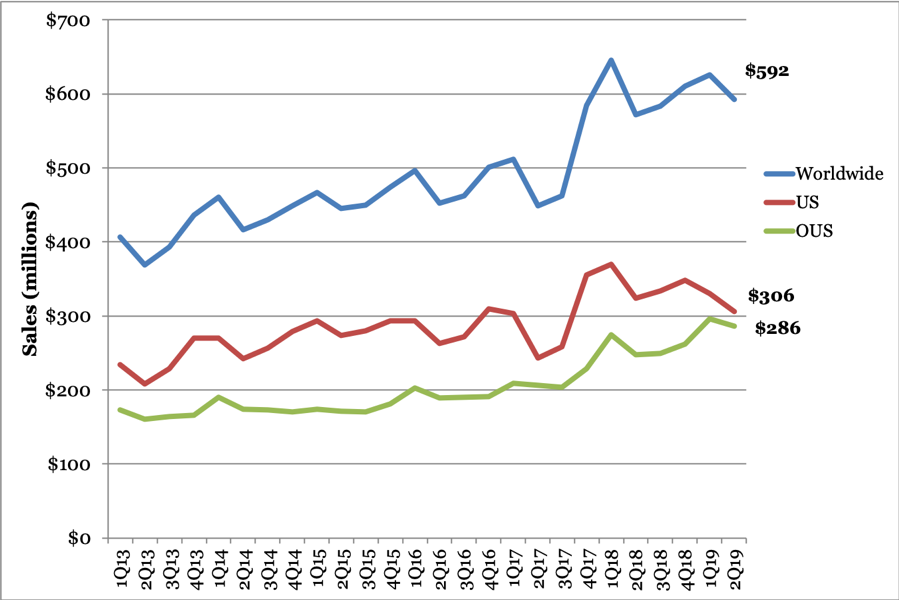 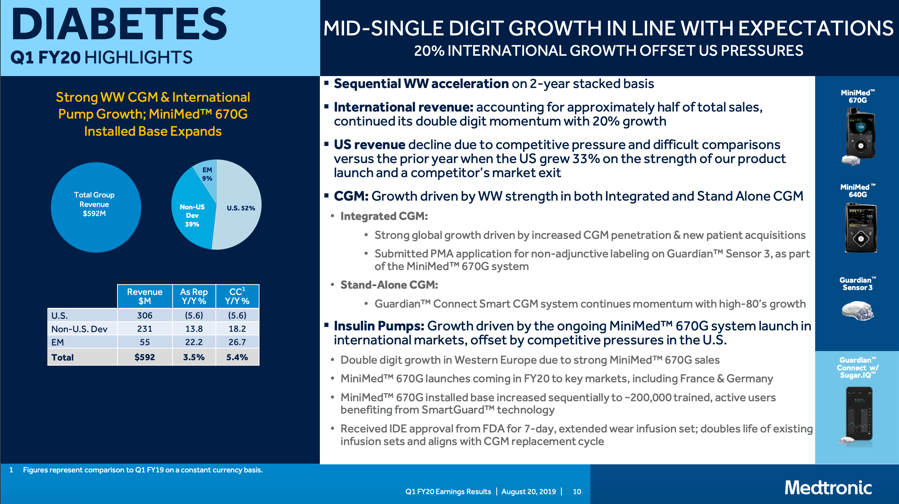 Medtronic reported worldwide Diabetes revenue of $592 million in 2Q19, rising 4% YOY as reported (+5% operationally) on a very tough comparison to 27% YOY growth in 2Q18. The gain one year ago (2Q18) was fueled by US adoption of the 670G, which has tapered against strong competition (Tandem’s Basal-IQ, Insulet’s Dash), a dwindling Animas opportunity in the US, and less conversion from MDI (Insulet and Tandem are relatively stronger in that population). Sequentially, worldwide sales declined 5% as reported from the strong performance in 1Q19. The MiniMed 780G is the next major product launch for Medtronic, though expected towards the end of the fiscal year (i.e., by April 2020). 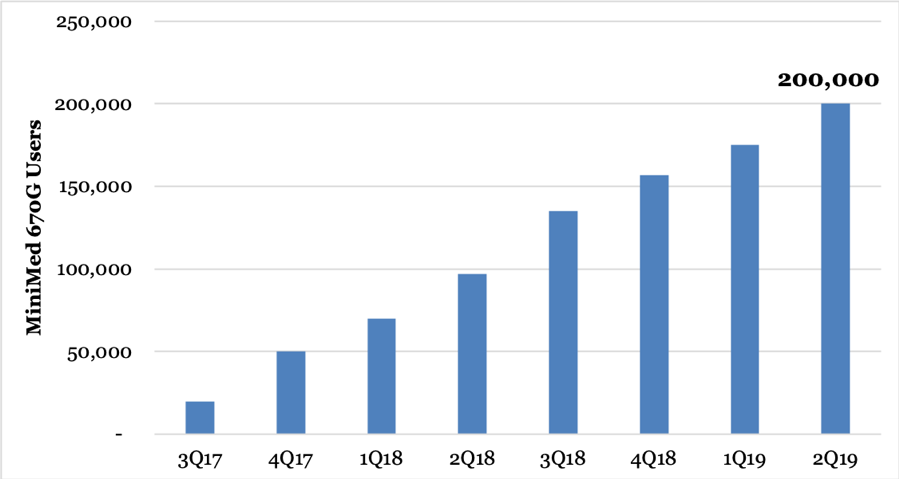 In prepared remarks, CEO Omar Ishrak shared that the MiniMed 670G hybrid closed loop now has “approximately 200,000” trained, active users globally, up 14% sequentially from 175,000 in 1Q19. Based on the revenue splits and management comments that 670G is experiencing “strong consumer demand internationally as [it] launches into new markets,” we assume that most of this user base growth came from international markets. Launch in other “key markets,” including France and Germany, are expected to come by April 2020 (in “FY20”). During Q&A (see below), EVP of Diabetes Hooman Hakami noted that the company expected to get German reimbursement for 670G in 3Q19, but is now expecting that to come in 4Q19.

3. Guidance of 6%-8% Diabetes Growth in FY20 Maintained, “Leaning Towards” the “Lower End” of the Range

Medtronic met its 1Q19 guidance of “5%, plus or minus” Diabetes growth for 2Q19 and reiterated its expectation for growth to reach 6%-8% for all of FY20 (April 2019 – April 2020). On the call, CFO Karen Parkhill clarified that the company was “comfortable at the lower end” of the 6%-8% range, citing “softness” in US diabetes. CEO Omar Ishrak added that Medtronic has “sort of turned down the numbers a little bit” on diabetes. 3Q19 will come on a very tough comparison to 26% growth in 3Q18 before easing up in the second half of FY20. In addition, the launch of Tandem’s Control-IQ in 4Q19, expansion of Insulet’s Dash launch into the pharmacy, and the imminent entry of FreeStyle Libre 2 iCGM in the US market (currently under FDA review) will bring further US competition. Non-adjunctive CGM labeling (filed in July) and the MiniMed 780G are the major pipeline projects with “FY20” timing (see below), and throughout the call, management expressed their excitement for these launches. Both will be key to re-accelerate Medtronic’s diabetes business.

Prepared remarks reiterated the plan to launch the MiniMed 780G advanced hybrid closed loop by April 2020 – “in the second half of this fiscal year” – aligning with five straight investor updates (ADA Analyst Briefing, 1Q19, JPM, 4Q18, 3Q18). The call did not specify whether that was US or OUS launch timing, and Medtronic told us the geographic cadence will depend on regulatory progress. The 780G pivotal trial commenced at ADA, and Mr. Ishrak said the company expects to complete 780G trial enrollment “in the next few weeks.” In a subsequent email, Medtronic said that trial enrollment for adults will be complete this month, and enrollment for pediatrics (7+ years) will complete in September. This is impressive recruiting speed, as the large trial is enrolling up to 350 adult and pediatric participants (7+ years old) in a three-month, single-arm safety evaluation (home study) – same design as the 670G pivotal, but nearly three times the study size out of the gate. According to ClinicalTrials.gov, primary completion is expected by January 31, 2020. The 780G pivotal has co-primary end points – change in A1c and change in time-in-range (70-180 mg/dl) from baseline. The 780G is marketed as an “advanced hybrid closed loop,” as it adds automatic correction boluses (on top of basal modulation), an ambitious >80% time-in-range goal, an adjustable target down to 100 mg/dl, Bluetooth, remote software updating, a mobile app for secondary display and wireless pump uploads, fewer alarms, and simpler operation. Initially, the 780G will require two fingerstick calibrations per day (non-adjunctive Guardian Sensor 3), though it will presumably move to the Zeus iCGM (see below) once that product is approved. 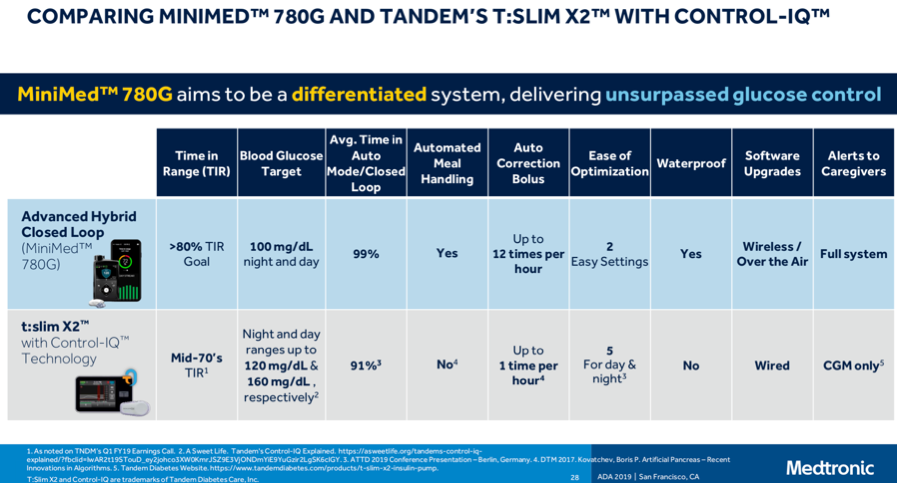 Reiterating July’s announcement, remarks briefly noted the FDA PMA filing to obtain non-adjunctive labeling for the Guardian Sensor 3 CGM as part of MiniMed 670G hybrid closed loop. No FDA approval timing was forecasted today, though we assume the review will be straightforward – Medtronic is the fourth company to apply for a non-adjunctive CGM indication in the US, after Dexcom (G5, G6), Abbott (FreeStyle Libre 10- and 14-day), and Senseonics (Eversense 90-Day; obtained in June). The critical labeling update will finally allow the 670G to apply for Medicare reimbursement as a therapeutic CGM – a long-time coming follow first-in-class FDA approval of the hybrid closed loop nearly three years ago. Medtronic told us it will not change the 670G’s software (in the pump or transmitter), though this label update would officially remove the need for a confirmatory fingerstick before a food or correction bolus. At least two fingerstick calibrations per day will still be required for the sensor to function and keep 670G in Auto Mode. This is also the CGM labeling that will launch with the 780G, which adds automatic non-adjunctive boluses based on CGM readings.

Management highlighted “good progress” in the ongoing pivotal trial for Zeus, the next-generation sensor platform that aims for iCGM labeling and day 1 calibration only. It will maintain seven-day wear and the same reusable clamshell transmitter design. The pivotal trial was announced during ADA; at the time, FDA submission was forecasted for April-October 2020. According to ClinicalTrials.gov, primary completion is expected in February 2020. This is big study, enrolling up to 460 participants with type 1 or type 2 diabetes (2+ years old), with primary endpoints focused on iCGM benchmarks: ± 20%/20 mg/dl agreement vs. YSI and ±15 mg/dl Agreement with YSI (<70 mg/dl). We do not believe the inserter or Guardian Sensor 3 chemistry has changed, implying this is only a calibration algorithm update – from 14 fingersticks over the course of wear (two per day) to two on the first day of wear. 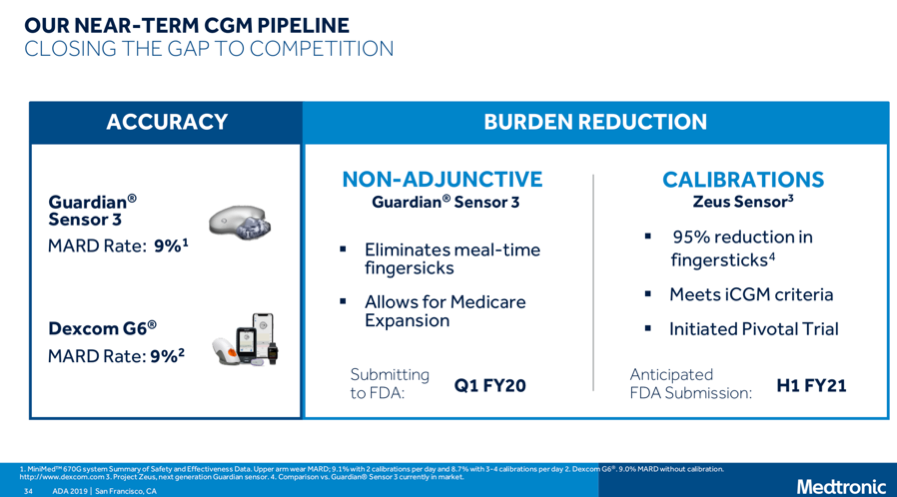 On Thursday, Medtronic announced that it has received FDA investigational device (IDE) approval to begin a pivotal study of its extended wear infusion set. The goal is to support wear for “up to seven days.” The multi-center, non-randomized, prospective, single-arm study will enroll up to 150 participants with type 1 diabetes (18-80 years), all wearing the MiniMed 670G and comparing current 2-3 day sets to the new extended wear set. The set uses “proprietary technology” and has been developed in partnership with long-time partner Unomedical. The press releases only specifies “new adhesive technology” and “maintaining insulin stability.” Medtronic confirmed the extended wear catheter will be packaged in the all-in-one, hidden-needle Mio Advance automatic inserter device – this fantastic product has been available in Europe and FDA cleared for over a year, but not yet launched in the US (the companies are still building capacity). Per ATTD, this extended wear set technology is different from Unomedical’s internally-developed coated Lantern. A previous extended wear trial used heparin (prevents blood clots in catheters), but Medtronic confirmed with us that this new set does not.

Other pipeline projects mentioned in the ADA Analyst Briefing were not discussed today. Note that in the ADA slides below, “FY21” runs from April 2020-April 2021. 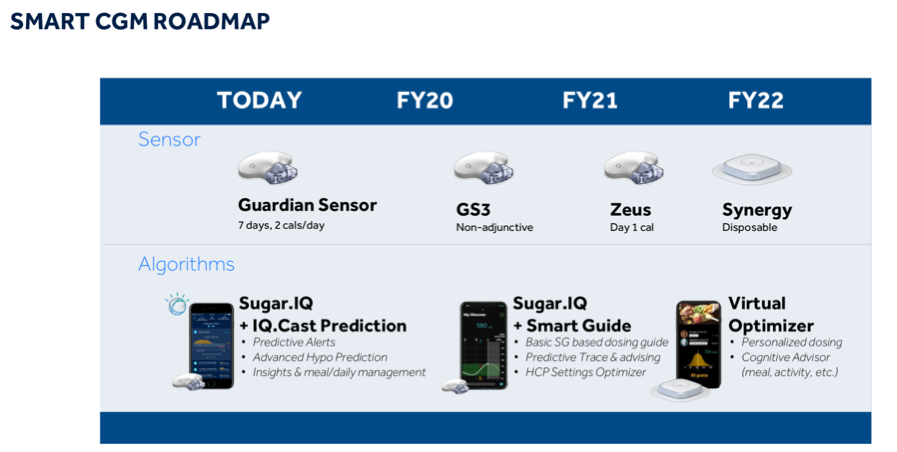 Q: On diabetes, I noted that you were nicely in line this first quarter, but have switched the guidance to the low-end of the range. Just curious if you could talk about that a little bit?

Omar Ishrak: On diabetes, I know we sort of turned down the numbers a little bit, but that doesn't remove our excitement regarding the upcoming launches here. The advanced hybrid closed loop with Bluetooth connectivity, in particular, towards the end of the fiscal year is one that we are zeroing in on, and the clinical trials and so on are in progress. We've had more competitive pressure than we would like in the US in the first quarter, so taking that into account, we decided to be prudent about what our guidance should be. But let's not take anything away from the product launches that we are anticipating in the second half, those are on time and we will see what the results are but we're pretty excited about them.

Hooman Hakami: Maybe first a little bit of color on the dynamics that drove Q1 and that I think also sort of drives the guidance. If you recall from ADA, the quarter was pretty much in line with what we talked about at ADA. We anticipated strong OUS growth – check. In the US, we expected consistent consumables and CGM revenue from the installed base – check. We said that we expected to renew our patients coming out of warranty in line with historical rates, we were able to do that, and then we said the most volatile thing was really the conversions in the US of patients coming from MDI, and that also sort of factored in. We are able to balance all of that and deliver in Q1. Now as far as the rest of the year goes, it’s largely as Omar stated: it's a function of the pipeline which remains on track versus what we discussed at ADA.

Now in Q2, we did expect to get some reimbursement for 670 in Germany and we were hoping that that would be an incremental contributor to offset some of the U.S. pressure that was discussed, but now we're assuming we don't get this and we'll get it next quarter. So for all of the reasons mentioned, this is why we're maintaining the range, but leaning toward the lower end of the range.

Q: There are a number of new products that are launching over the next 12 to 18 months. Can you please give us a highlight of which ones are you the most excited about?

Mr. Ishrak: There's a number of new products coming out, but I'm going to go through a few of these that I think of the most exciting […] in diabetes, the MiniMed 780G, that's got Bluetooth connectivity. It's an advanced hybrid closed loop system. It's the second generation of the closed loop based on our experience and the database that we have on patients already. […] And then finally, the diabetes system [780G], we also expect to complete enrollment of the patients in the next few weeks.

Q: Just thinking about the guidance for the second quarter, I think last quarter you suggested 4% growth for the second quarter, and now you're suggesting something closer to 3.5%. So is the relative change simply Diabetes? And you still need some momentum improvement frankly sequentially to get to that number? And what drives that confidence?

Karen Parkhill (CFO): In terms of 2Q, we're excited about the growth acceleration that we intend to drive in the second half. You know in Q2 we're seeing some US softness in Diabetes that we talked about, and we are seeing some pain markets issues. But beyond that, we are very excited about the acceleration that we are going to drive. And it's just the first quarter, so we are focused on delivering as we move through the year.